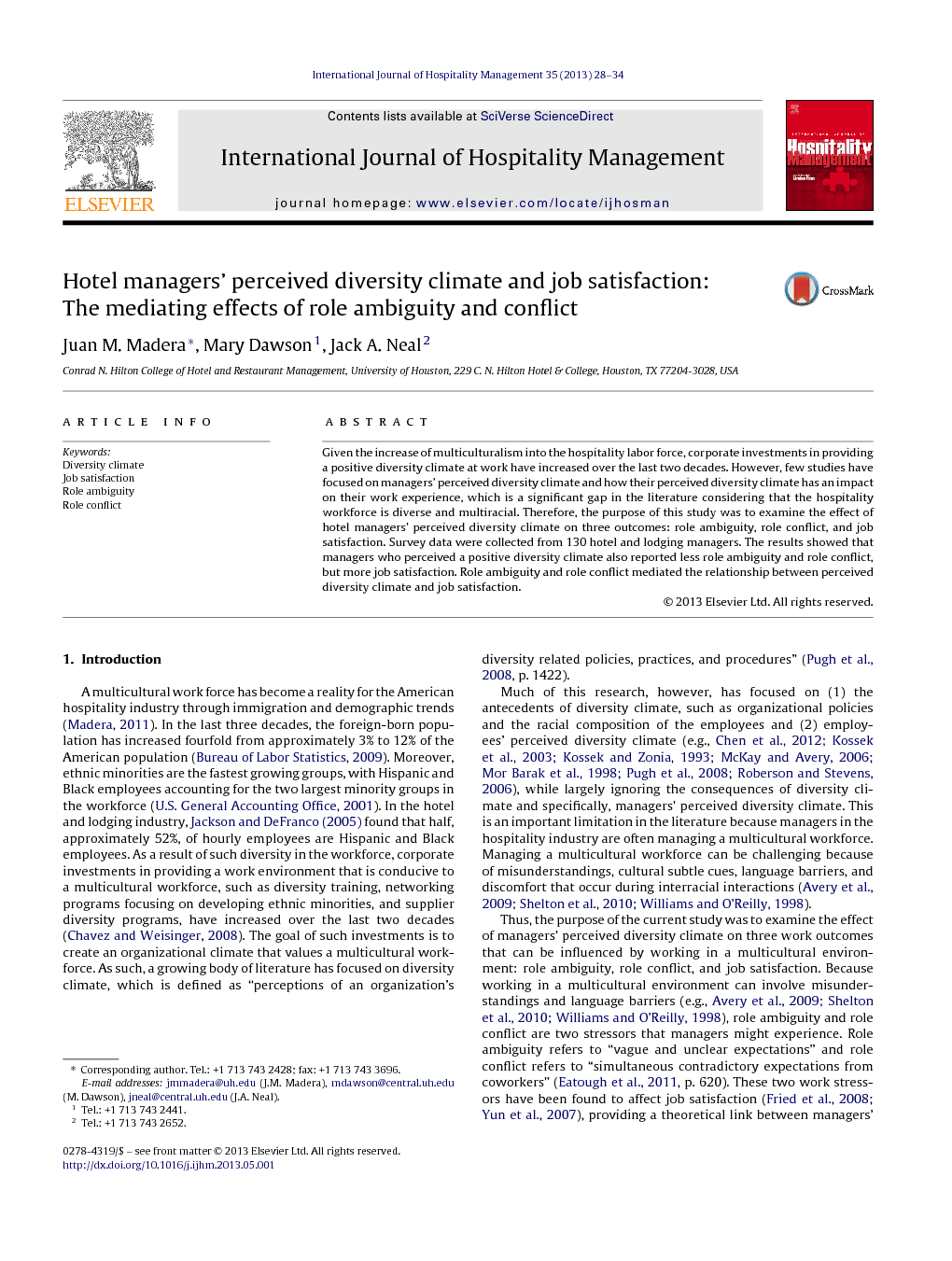 A multicultural work force has become a reality for the American hospitality industry through immigration and demographic trends (Madera, 2011). In the last three decades, the foreign-born population has increased fourfold from approximately 3% to 12% of the American population (Bureau of Labor Statistics, 2009). Moreover, ethnic minorities are the fastest growing groups, with Hispanic and Black employees accounting for the two largest minority groups in the workforce (U.S. General Accounting Office, 2001). In the hotel and lodging industry, Jackson and DeFranco (2005) found that half, approximately 52%, of hourly employees are Hispanic and Black employees. As a result of such diversity in the workforce, corporate investments in providing a work environment that is conducive to a multicultural workforce, such as diversity training, networking programs focusing on developing ethnic minorities, and supplier diversity programs, have increased over the last two decades (Chavez and Weisinger, 2008). The goal of such investments is to create an organizational climate that values a multicultural workforce. As such, a growing body of literature has focused on diversity climate, which is defined as “perceptions of an organization's diversity related policies, practices, and procedures” (Pugh et al., 2008, p. 1422). Much of this research, however, has focused on (1) the antecedents of diversity climate, such as organizational policies and the racial composition of the employees and (2) employees’ perceived diversity climate (e.g., Chen et al., 2012, Kossek et al., 2003, Kossek and Zonia, 1993, McKay and Avery, 2006, Mor Barak et al., 1998, Pugh et al., 2008 and Roberson and Stevens, 2006), while largely ignoring the consequences of diversity climate and specifically, managers’ perceived diversity climate. This is an important limitation in the literature because managers in the hospitality industry are often managing a multicultural workforce. Managing a multicultural workforce can be challenging because of misunderstandings, cultural subtle cues, language barriers, and discomfort that occur during interracial interactions (Avery et al., 2009, Shelton et al., 2010 and Williams and O’Reilly, 1998). Thus, the purpose of the current study was to examine the effect of managers’ perceived diversity climate on three work outcomes that can be influenced by working in a multicultural environment: role ambiguity, role conflict, and job satisfaction. Because working in a multicultural environment can involve misunderstandings and language barriers (e.g., Avery et al., 2009, Shelton et al., 2010 and Williams and O’Reilly, 1998), role ambiguity and role conflict are two stressors that managers might experience. Role ambiguity refers to “vague and unclear expectations” and role conflict refers to “simultaneous contradictory expectations from coworkers” (Eatough et al., 2011, p. 620). These two work stressors have been found to affect job satisfaction (Fried et al., 2008 and Yun et al., 2007), providing a theoretical link between managers’ perceived diversity climate and job satisfaction. As a consequence, the extent to which managers perceive their organizations value diversity might influence other organizational outcomes related to working in a diverse workforce.