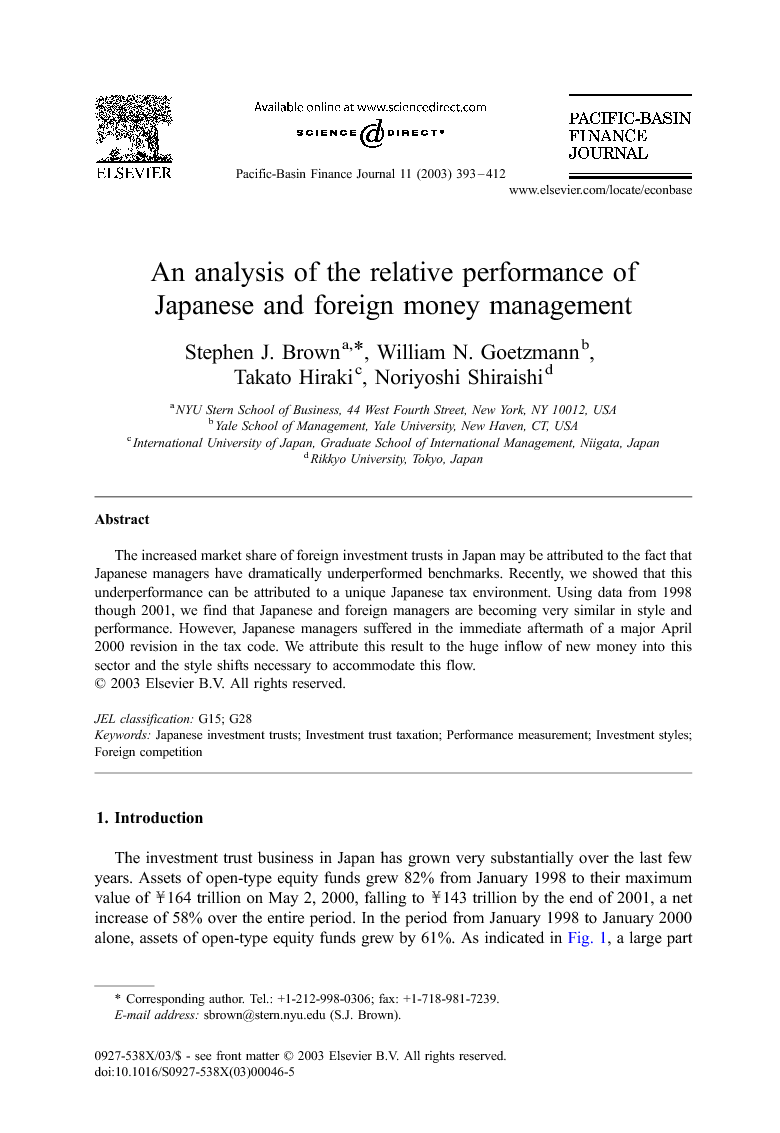 The increased market share of foreign investment trusts in Japan may be attributed to the fact that Japanese managers have dramatically underperformed benchmarks. Recently, we showed that this underperformance can be attributed to a unique Japanese tax environment. Using data from 1998 though 2001, we find that Japanese and foreign managers are becoming very similar in style and performance. However, Japanese managers suffered in the immediate aftermath of a major April 2000 revision in the tax code. We attribute this result to the huge inflow of new money into this sector and the style shifts necessary to accommodate this flow.

The investment trust business in Japan has grown very substantially over the last few years. Assets of open-type equity funds grew 82% from January 1998 to their maximum value of ¥164 trillion on May 2, 2000, falling to ¥143 trillion by the end of 2001, a net increase of 58% over the entire period. In the period from January 1998 to January 2000 alone, assets of open-type equity funds grew by 61%. As indicated in Fig. 1, a large part of that increase can be attributed to the increase in assets under management by foreign-owned investment trusts. As illustrated in Fig. 2 and Fig. 3, foreign investment management firms have recently started to play a major role in the investment trust business in Japan. Over the period from 1998 to 2000, their market share increased substantially,1 with more than 71% of this growth coming from net inflow of funds, particularly in 1998 (Fig. 4). Most of this increase can no doubt be traced to aggressive marketing by foreign-owned firms. The success of this marketing effort is evident in Fig. 2 and Fig. 3, which show the increased market share and how many new foreign firms have entered the market. Fidelity, in particular, has been very successful. This has come at the expense of traditional firms like Nomura and Daiwa. Another reason for the increase in foreign market share is the purchase by foreigners of traditional Japanese asset managers.2 However, at least part of this increased market share can be attributed to the fact that Japanese investment trusts have underperformed benchmarks in quite a dramatic fashion over the past two decades.3 This widely publicized fact has shaken public confidence in the industry, the third largest investment trust business in the world outside of the United States and France. There is a widespread perception that foreign managers are simply more skillful than their Japanese competition.4Kamesaka et al. (2002) document that foreign traders in the Japanese equity market were able to profit from their trading activities there as the market fell through the 1990s. Some have argued, for example, that it is difficult for Japanese investors to compete with foreign traders who can exploit opportunities that arise from institutional differences between local and home markets.5 On the other hand, foreign-owned investment trusts operate in the same markets, are subject to the same regulatory environment, and employ large numbers of Japanese and Japanese trained managers. It would be strange indeed to find that foreign investors could systematically overcome the informational advantage of their domestic competition. In fact, a close analysis of the data for Korea and elsewhere confirms that domestic traders do well in small or illiquid investments where we would expect the informational asymmetry to be most severe (Kim, 2002). Foreign investors were quicker to react to the downturn in the markets in Japan in 1990 than were the domestic investors (Kamesaka et al., 2002), but this does not necessarily speak to their longer term superiority, and may suggest instead that they typically follow naive trend-following strategies. The fact that Japanese investment trusts underperform established benchmarks does not necessarily show that Japanese funds underperform their foreign counterparts. In a recent paper (Brown, Goetzmann, Hiraki, Otsuki and Shiraishi, 2001) (BGHOS), we show that the reported underperformance can be attributed almost entirely to the unique tax environment of Japanese investment trusts. In 1966, tax regulations were introduced that had the effect of heavily penalizing early withdrawals from investment trusts.6 It is fair to say that these regulations significantly inhibited the growth of the investment trust industry. In March 1998, the Japanese Cabinet recommended for legislation “The Three-Year Implementation Plan on Public Administrative Deregulations,” which included a revision of investment trust tax treatment to conform with international standards, to come into effect on April 1, 2000.7 In addition to revising the tax treatment of investment trusts, this legislation allowed investment trusts to incorporate in a manner similar to US mutual funds. The relaxation of these regulations coincided with a major inflow of new money into Japanese-managed investment trusts, amounting to ¥27.7 trillion from January to December 2000. This amount represents 26.3% of the assets of Japanese investment trusts as of the beginning of the year. Unfortunately, a very large majority of this new money (91.7%) flowed into Japanese general equity accounts which peaked in value coincidentally with the change in tax regulations, and subsequently lost 25% in value on an annualized basis up to December 28, 2001. The increased market share of foreign investment management firms in Japan from 1998 to the present allows a direct test of the hypothesis of foreign superiority in the investment management business. Foreign investment trusts have taken a significant market share of the Japanese investment trust industry in the last 4 years. For this reason, it is possible to analyze their relative performance in the same investment environment by analyzing week by week returns. Contrary to popular perception, Japanese managers did not underperform their foreign competition in the period of our data from January 23, 1998 through December 28, 2001. While Japanese investment trusts ended up with a loss of 5% over the entire period, this loss was indistinguishably different from the annualized value-weighted geometric return of negative 4.3% experienced by foreign managers over the same period (Fig. 5). We will find the same pattern of returns even after controlling for sector allocations by Japanese investors outside the control of Japanese managers. However, in no case are the returns significantly different from foreign managers, after controlling for style of management. The evidence suggests that Japanese managers happened to be in the right place at the right time as the market rose. But then, victims of their own success, they were burdened with massive fund inflows just as the markets were turning against them.

Japanese investment trusts have underperformed benchmarks in quite a dramatic fashion over the past two decades. This widely publicized fact has shaken public confidence in the industry, the third largest investment trust business in the world outside of the United States and France. It has also opened the door to foreign competition, and foreign-owned funds increased more than 70% from new investments in 1998 alone. Obviously the perception was that foreign-owned funds are more successful than their home-grown competition. If true, this result would be most interesting indeed. In the past, foreign-owned funds specialized in international investments for which they had some comparative advantage. However, recently they have been investing more heavily in the Japanese domestic equity market, and are employing large numbers of Japanese managers to construct and monitor these portfolios. The fact that Japanese investment trusts underperform benchmarks is at best indirect evidence that Japanese funds also underperform their foreign counterparts. In a recent paper, BGHOS (2001) show that the underperformance can be attributed almost entirely to the unique tax environment of Japanese investment trusts. In this paper, we examine the relative performance issue directly by looking at week by week returns for the period January 23, 1998 through to December 28, 2001. Contrary to popular perception, Japanese managers did not underperform their foreign counterparts over this period of time, and in fact significantly outperformed them in the months leading up to a major change in tax regulations at the end of March 2000. Perhaps this indicates that Japanese managers are more skillful. However, the excess return evidence suggests that they happened to be in the right place at the right time, and the negative return subsequent to March 2000 may in part be attributed to the huge inflow of new money into this sector and the style shifts made necessary to accommodate this flow. Thus we attribute the difference in performance to the asset allocation decision, rather than to any different skill in selecting securities.