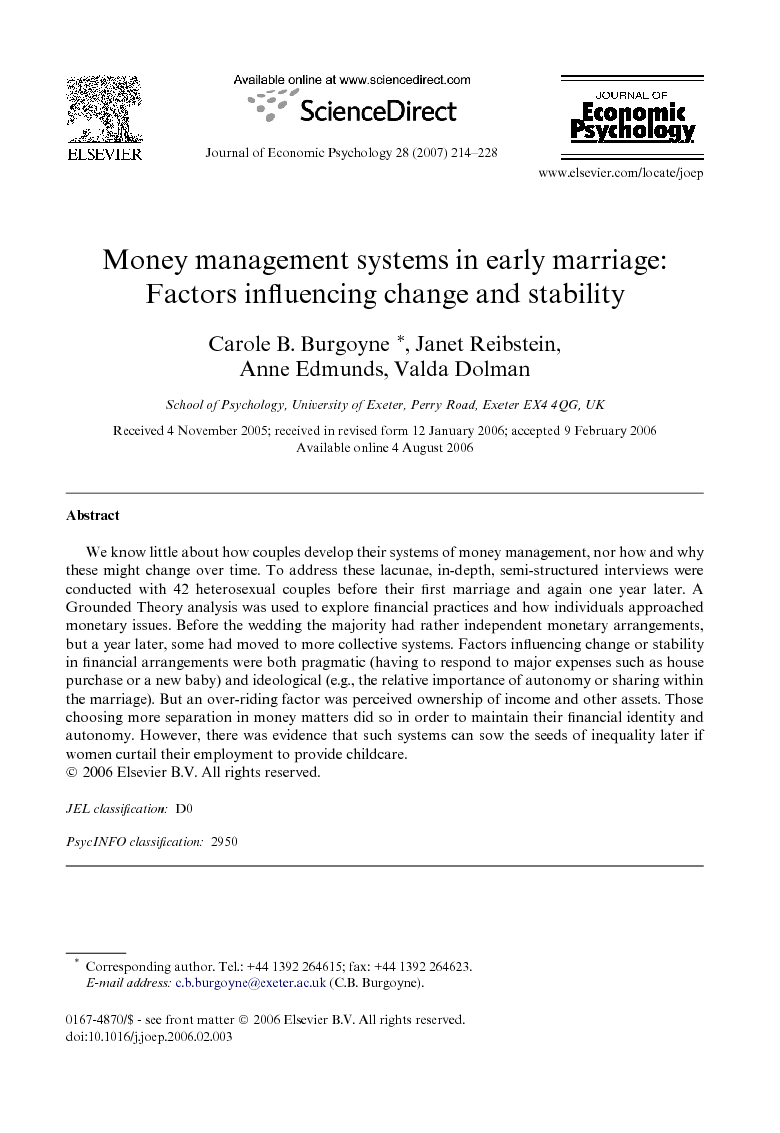 We know little about how couples develop their systems of money management, nor how and why these might change over time. To address these lacunae, in-depth, semi-structured interviews were conducted with 42 heterosexual couples before their first marriage and again one year later. A Grounded Theory analysis was used to explore financial practices and how individuals approached monetary issues. Before the wedding the majority had rather independent monetary arrangements, but a year later, some had moved to more collective systems. Factors influencing change or stability in financial arrangements were both pragmatic (having to respond to major expenses such as house purchase or a new baby) and ideological (e.g., the relative importance of autonomy or sharing within the marriage). But an over-riding factor was perceived ownership of income and other assets. Those choosing more separation in money matters did so in order to maintain their financial identity and autonomy. However, there was evidence that such systems can sow the seeds of inequality later if women curtail their employment to provide childcare.

This paper has identified some of the factors influencing money management at the point of marriage and reveals two snapshots of money management systems in transition. Our findings at Time 1 differed from those of previous research with longer-established couples (e.g., Laurie and Rose, 1994 and Vogler and Pahl, 1994). The present sample at Time 1 were predominantly dual-income couples without children. Only three couples were using Whole Wage systems before the wedding and only one couple was still using that system a year later. No couple was using an Allowance system at either time, though one couple indicated that they might adopt that system when they started a family. We were surprised that so few couples had already started pooling their money at Time 1, especially as it had received such strong endorsement in Burgoyne and Routh’s (2001) study of young adults and is the most common form of money management in the UK (Laurie & Rose, 1994). Only five of our 42 couples were pooling at Time 1, yet the majority had already been cohabiting for varying amounts of time prior to the wedding. A year after the wedding, the number of couples pooling their money had tripled and now comprised more than a third of the sample. Many of those who had started with IM had moved to pooling part of their incomes for joint expenses. What accounts for these changes? One reason appears to be purely pragmatic: in many cases it seems that systems gradually evolve in response to purely economic factors such as the need to pool resources for major expenses of buying a house or starting a family. However, this is only part of picture: views of marriage and of the individual roles within the relationship also seem to play a role. Thus, if partners place a great deal of value on having freedom and independence, including the right to control their own earnings, then they are more likely to keep all of their money separately, or to pool only enough for joint expenses. Such couples anticipate little further change in management style over time. This may account for the relatively large proportion of our sample who were using partial-pooling or IM at both points in time. However, even these couples are not immune to prevalent norms concerning sharing in marriage. Many of those keeping substantial amounts of their money under their own control were also keen to emphasise that the money was available for both partners should the need arise. Maintaining the visibility of earned income and the right to decide when it could be used for collective purposes seemed to be important to maintain a separate sense of financial identity within the marriage. However, there was a down-side to maintaining such visibility: not contributing financially also becomes more visible and this had implications for the few women who could see this looming ahead. Even for those who intended to return to their careers after maternity leave, there was likely to be a period when they could not contribute financially on an equal basis. They anticipated future difficulties, and some women, especially those with more separate financial arrangements, had already started taking steps to avoid dependency or having to ask for PSM when they started a family. In contrast, those who stressed the sharing and merging of identities represented by a more traditional view of marriage were more likely either to start with a pooling system, or to move towards a more collective scheme over time. But even amongst couples with a shared view of money there were some for whom it was important to ‘pay their way’, or at least make a reasonable contribution to collective expenses proportional to their earnings, to avoid being seen as a dependent or a less than equal partner. Our participants exemplify the moral dilemmas identified by Gerson (2002, pp. 12–14) in attempting to achieve a balance between commitment and self-reliance in today’s more fluid and ‘voluntary’ relationships. As Pahl, 2005 and Elizabeth, 2001 have also commented, there are inescapable tensions in trying to balance the competing desires for financial autonomy vs. equality when there is disparity in partners’ incomes. A couple’s choice of financial system may ameliorate this tension, but it is unlikely to resolve it completely. Indeed, the present findings suggest that attempts to preserve separate ownership and financial identity in the early stages of marriage may risk sowing the seeds of inequality at a later stage.