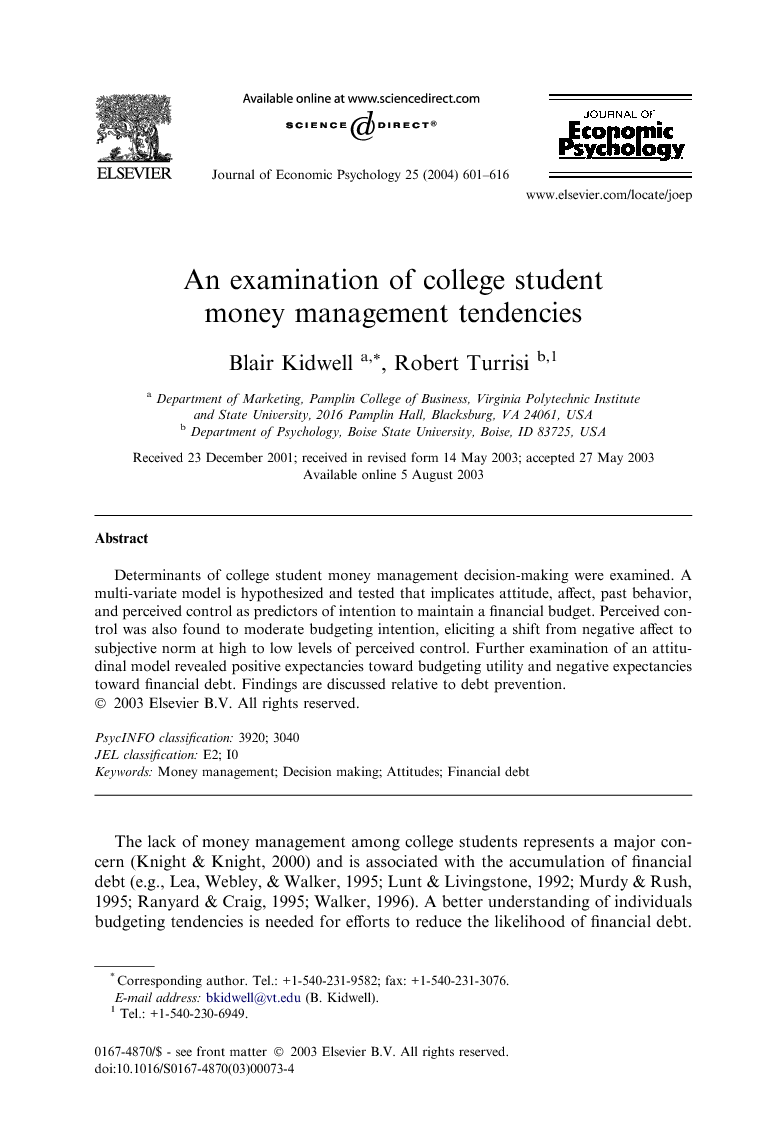 Determinants of college student money management decision-making were examined. A multi-variate model is hypothesized and tested that implicates attitude, affect, past behavior, and perceived control as predictors of intention to maintain a financial budget. Perceived control was also found to moderate budgeting intention, eliciting a shift from negative affect to subjective norm at high to low levels of perceived control. Further examination of an attitudinal model revealed positive expectancies toward budgeting utility and negative expectancies toward financial debt. Findings are discussed relative to debt prevention.

1.1. Maintaining a financial budget A critical component of money management is the maintenance of a financial budget. Budgeting can be defined as allotting all or part of a person's total financial resources into distinct categories in order to track expenses against a tangible (electronic or manual) monetary forecast. This definition relies on the assumption that as expenses are incurred they deplete funds available in account categories (e.g., household or automobile expenses) making future purchases less likely (Heath & Soll, 1996). Thus, budgeting can be viewed as a strategy of managing personal finances with the purpose of avoiding negative outcomes of debt accumulation (Lunt & Livingstone, 1991). 1.2. Focus of budgeting research Research on budgeting has indicated that beliefs about money and the management of money can influence spending patterns (e.g., Heath & Soll, 1996; Tokunaga, 1993), perceived ability to spend (e.g., Lea et al., 1995) and even normative influences toward spending (Rook & Fisher, 1995). These studies suggest that improved budgeting effectiveness can reduce the likelihood of overconsumption (e.g., Heath & Soll, 1996) and overspending (Lea et al., 1995). Further, research has suggested that overspending and overconsumption are reliable indicators of an individual's acceptable level of financial debt (Davies & Lea, 1995; Dittmar, 1996; Furnham, 1999; Hira & Brinkman, 1992; Lim & Teo, 1997; Livingstone & Lunt, 1993; Lunt & Livingstone, 1992) and perceived economic well-being (e.g., Hayhoe & Wilhelm, 1998; Wilhelm & Varcoe, 1991). Taken together, these streams of research suggest that an individual's tendency to manage money can subsequently influence the accrual of financial debt. Therefore, an understanding of the factors that influence intentions to maintain a financial budget may be useful in creating interventions designed to reduce the debt that is likely to accumulate due to a lack of money management. 1.3. Intervention strategies Despite the noted contributions in the area of budgeting and money management, college students remain at risk of debt due to a lack of budgeting (Munro & Hirt, 1998). The major method used to address the lack of budgeting has been educational interventions (e.g., Carsky, Lytton, & McLaughlin, 1984; Danes, 1994). Although some educational interventions have resulted in short-term improvements in financial related knowledge, the behavioral effects of maintaining a budget have been minimal (Danes, 1994; Hira & Brinkman, 1992). The limited results may be due primarily to the theoretical approach underlying these interventions. These approaches are limited in that they typically focus on variables that are resistant to change in short-term interventions, including personality and demographic characteristics (for a review of these variables see Lea et al., 1995; Lunt & Livingstone, 1991; Tokunaga, 1993), or on variables that are only indirectly related to the actual behavior (i.e., general knowledge and attitudes) (see Davies & Lea, 1995; Hira & Brinkman, 1992; Kidwell, Brinberg, & Turrisi, in press). A more viable approach to intervention efforts is to focus on variables that are theoretically and empirically related to decision-making (i.e., intentions to perform a behavior); variables that are more amenable to change in short-term interventions (Armitage & Conner, 2002). Thus, changing budgeting tendencies may require changing an individual's feelings, cognitions, normative beliefs, habits and perceptions of control toward budgeting, and not merely increasing knowledge toward money management and financial debt.

The present research extends work on models of money management that identify factors influential to budgeting in order to shed light on the lack of college student money management associated with financial debt. The results of this study imply that a models of budgeting tendencies is incomplete when: (1) an influence of multiple variables are not incorporated, (2) empirically related variables from decision theoretic models are not included, (2) perceived control is not incorporated as a moderated influence, and (3) the segmentation among levels of perceived control and subjective norm/negative affect onto intention are not considered. This study has focused on variables amenable to change in short-term interventions, providing information about how to target appropriate individuals based on levels of control, indicate factors that determine budgeting intention, and suggest a means to change cognitions relevant to individuals likely to maintain a financial budget. With this research, necessary concepts and suggestions are provided to guide educational efforts in devising effective and appropriate strategies to stimulate budgeting behavior, in order for these individuals to avoid the negative consequences of financial debt, often caused by a lack of money management.