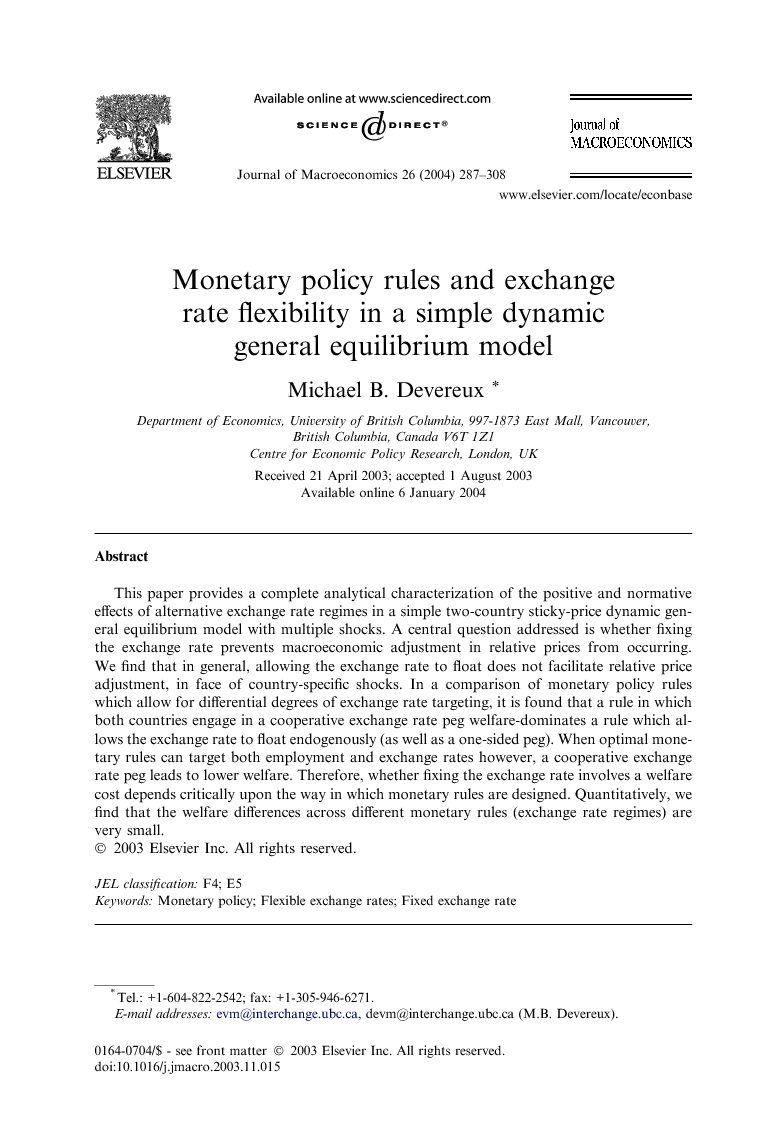 This paper has examined the trade-off between fixed and floating exchange rates in a sticky-price dynamic, stochastic general equilibrium model with capital accumulation. The results suggest that the trade-off is quite at variance with much of the discussion in the policy literature. In our model, allowing the exchange rate to float does not help at all in the response to country-specific supply or demand policy shocks. In fact, fixed exchange rates may do better, by increasing employment and long run GDP, as well as welfare. But if the benchmark comparison is one where monetary policy can be `activist', where monetary rules can target employment, then giving up exchange rate flexibility will have real costs, both in terms of macroeconomic volatility and average long run GDP. Overall, however, when quantified in this model, the welfare differences between alternative exchange rate regimes is very small. We have focused only on velocity shocks and productivity shocks. But it can be shown that the presence of government spending shocks has no affect on the welfare comparison between fixed and floating carried out in Section 5. Since the exchange rate will not in general respond directly to governments spending shocks, a passive floating exchange rate regime does not improve welfare relative to a peg, and moreover, for the same reasons as before, a cooperative peg still welfare dominates. There are a number of caveats. Special functional forms are used in order to facilitate an analytical solution, and the model has only one period price setting. But in fact the result that productivity shocks do not directly affect the exchange rate extends to more general preference specifications (see Devereux and Engel, 2003). Also, it is worthwhile to note that the functional forms used are very close to those employed in the quantitative International Real Business Cycle literature, so it is not clear how limiting the present model is. A more general analysis would presumably need to allow for a more persistent degree of price rigidity, along the lines of Calvo (1983) or Taylor (1979). Extending our model to allow for this would make it necessary to employ numerical solution methods. This is left for future research. Nonetheless, our analysis may throw some light on the debate about the costs and benefits of exchange rate flexibility. In this vein, we might interpret the results as providing a cautionary note about the adjustment properties of floating exchange rates.