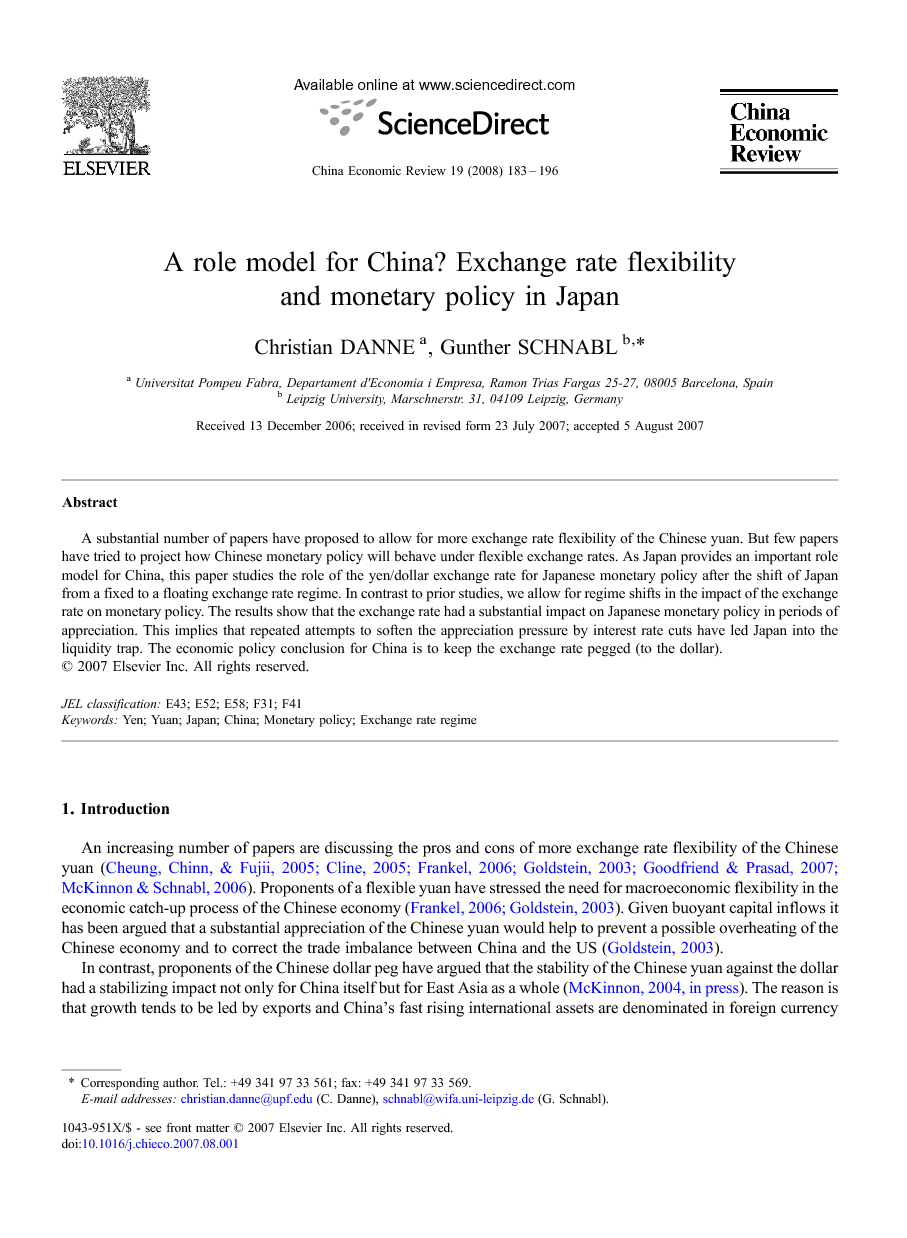 An increasing number of papers are discussing the pros and cons of more exchange rate flexibility of the Chinese yuan (Cheung et al., 2005, Cline, 2005, Frankel, 2006, Goldstein, 2003, Goodfriend and Prasad, 2007 and McKinnon and Schnabl, 2006). Proponents of a flexible yuan have stressed the need for macroeconomic flexibility in the economic catch-up process of the Chinese economy (Frankel, 2006 and Goldstein, 2003). Given buoyant capital inflows it has been argued that a substantial appreciation of the Chinese yuan would help to prevent a possible overheating of the Chinese economy and to correct the trade imbalance between China and the US (Goldstein, 2003). In contrast, proponents of the Chinese dollar peg have argued that the stability of the Chinese yuan against the dollar had a stabilizing impact not only for China itself but for East Asia as a whole (McKinnon, 2004 and McKinnon, in press). The reason is that growth tends to be led by exports and China's fast rising international assets are denominated in foreign currency (McKinnon & Schnabl, 2004). Furthermore, McKinnon and Schnabl (2006) have argued that for countries in the economic catch-up process fixed exchange rates provide a more stable framework for the adjustment of labour and asset markets. They argue that Japan's repeated attempts to soften (productivity driven) appreciation pressure by interest rate cuts have finally led Japan into the liquidity trap. Up to the present, comparatively few papers have focused on the question of how Chinese monetary policy is likely to behave under a flexible exchange rate regime. Japan provides an important case study for the prospects of the Chinese monetary policy under a freely floating exchange rate for at least four reasons. First, like in China today, growth in Japan has been traditionally led by exports (McKinnon & Ohno, 1997). Second, like Japan China is an important saving surplus country and has accumulated large stocks of dollar denominated international assets (McKinnon & Schnabl, 2004). Third, Japan has shifted from a fixed to a flexible exchange rate regime in the early 1970s which is recommended for China today. Forth, back in early 1970s up to the late 1980s Japan was in the economic catch-up process like China is today. In this context we are interested in the question of if and how in Japan “fear of appreciation” affected the Bank of Japans' interest rate decisions. A substantial number of previous studies ( Chinn and Dooley, 1998, Clarida et al., 1998, Esaka, 2000, Funabashi, 1988, Henning, 1994, Hillebrand and Schnabl, 2006, Hutchison, 1988 and McKinnon and Ohno, 1997) have acknowledged that despite the official status of a freely floating economy the exchange rate has played an important role for Japanese monetary policy, in particular in times of appreciation. But to our knowledge no paper has formally analyzed the asymmetric impact of the exchange rate on Japanese interest rate decisions in appreciation phases and has explored the respective impact on the stability of the Japanese economy and in particular on the liquidity trap. We want to trace the possibly changing impact of the yen/dollar exchange rate on Japanese monetary policy based on a rolling Taylor type monetary policy reaction function with an exchange rate term. This allows us to provide a dynamic picture of the role of the exchange rate for Japanese monetary policy. To make an assessment of the impact of the yen appreciation on Japan's liquidity trap we introduce an interaction term into the GMM framework. We will show that Japan's repeated attempts to soften appreciation pressure by discretionary interest rate cuts have contributed to substantial economic instability and Japan's fall into the liquidity trap.