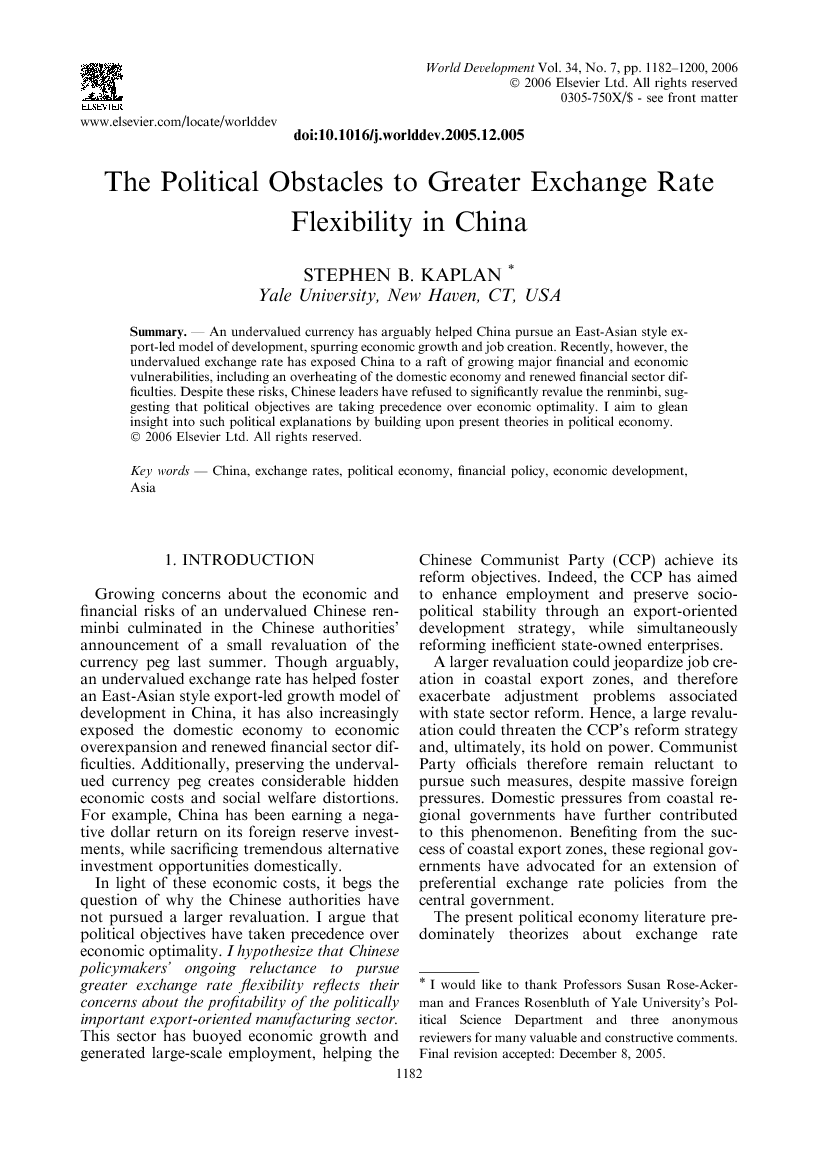 An undervalued currency has arguably helped China pursue an East-Asian style export-led model of development, spurring economic growth and job creation. Recently, however, the undervalued exchange rate has exposed China to a raft of growing major financial and economic vulnerabilities, including an overheating of the domestic economy and renewed financial sector difficulties. Despite these risks, Chinese leaders have refused to significantly revalue the renminbi, suggesting that political objectives are taking precedence over economic optimality. I aim to glean insight into such political explanations by building upon present theories in political economy.

Growing concerns about the economic and financial risks of an undervalued Chinese renminbi culminated in the Chinese authorities’ announcement of a small revaluation of the currency peg last summer. Though arguably, an undervalued exchange rate has helped foster an East-Asian style export-led growth model of development in China, it has also increasingly exposed the domestic economy to economic overexpansion and renewed financial sector difficulties. Additionally, preserving the undervalued currency peg creates considerable hidden economic costs and social welfare distortions. For example, China has been earning a negative dollar return on its foreign reserve investments, while sacrificing tremendous alternative investment opportunities domestically. In light of these economic costs, it begs the question of why the Chinese authorities have not pursued a larger revaluation. I argue that political objectives have taken precedence over economic optimality. I hypothesize that Chinese policymakers’ ongoing reluctance to pursue greater exchange rate flexibility reflects their concerns about the profitability of the politically important export-oriented manufacturing sector. This sector has buoyed economic growth and generated large-scale employment, helping the Chinese Communist Party (CCP) achieve its reform objectives. Indeed, the CCP has aimed to enhance employment and preserve socio-political stability through an export-oriented development strategy, while simultaneously reforming inefficient state-owned enterprises. A larger revaluation could jeopardize job creation in coastal export zones, and therefore exacerbate adjustment problems associated with state sector reform. Hence, a large revaluation could threaten the CCP’s reform strategy and, ultimately, its hold on power. Communist Party officials therefore remain reluctant to pursue such measures, despite massive foreign pressures. Domestic pressures from coastal regional governments have further contributed to this phenomenon. Benefiting from the success of coastal export zones, these regional governments have advocated for an extension of preferential exchange rate policies from the central government. The present political economy literature predominately theorizes about exchange rate developments from a demand side interest group perspective, neglecting to explore such supply side themes. For example, it focuses on the export-oriented manufacturers that pressured politicians to abandon overvalued fixed exchange rates during the waning years of the ISI period in Latin America (Frieden & Stein, 2001). Basically, the majority of this literature builds upon Frieden’s political economy model of exchange rates. It hypothesizes about how and why domestic socioeconomic groups influence government exchange rate decisions (Frieden, 1991). Employing this model as a base, I offer some theoretical refinements aimed at improving its ability to generalize to other countries and historic time periods. Frieden’s model of exchange rates policymaking treats the government as a largely neutral actor, channeling the preferences of interest groups into exchange rate policies. In contrast, I posit that government preferences, such as the CCP’s concerns about employment and social stability, are also a crucial element in policy formation. Frieden’s work suggests that a country’s manufacturing sector is an important determinant of its government’s commitment to a currency peg. He finds that the larger a country’s manufacturing sector, the greater its political influence, and thus the less likely the government is to maintain a currency peg (Frieden, Stein, & Blomberg, 2004). Interestingly, Frieden employs cases to support his hypothesis that all share a common characteristic: an overvalued currency. However, when we apply Frieden’s theory more generally to countries outside of Latin America, we find a high prevalence of cases with undervalued, rather than overvalued currency pegs. In light of this global and historical variation, I suggest that the probability of maintaining a currency peg is conditioned on the valuation of the exchange rate. For example, in the case of China’s undervalued exchange rate, the presence of a large and politically sensitive export-oriented manufacturing sector increases, rather than decreases, the likelihood that the government will maintain its commitment to a fixed exchange rate regime. In the following pages, I will first illustrate that the renminbi, by definition, is undervalued. I next highlight how such undervaluation is sub-optimal from an aggregate welfare perspective, creating substantial domestic, economic, and financial risks. I then demonstrate how current political economy models of exchange rate formation do not account for key supply side factors or condition for exchange rate valuation, leaving them unable to explain the case of China. Finally, I aim to build upon and refine these theoretical models to better explain developments in current Chinese exchange rate policy.

(a). The advantage of the political-economic approach The above discussion highlights the advantages of utilizing a political-economy approach to understand the Chinese authorities’ commitment to an undervalued exchange rate peg. In viewing present policy purely from an economic perspective, the Chinese leadership’s refusal to further revalue the currency appears to be surprisingly sub-optimal, given the associated economic and financial vulnerabilities. In contrast, the political-economy approach offers a political justification for this sub-optimality. Despite its economic inefficiencies, the interaction of two key political mechanisms explains the Chinese government’s reluctance to pursue a large-scale revaluation. From a supply side perspective, the government does not want to risk pursuing a large-scale revaluation that might undermine the growth of the coastal manufacturing sector. This sector has been able to absorb heavy job losses stemming from the restructuring of the state-owned sector. Hence, it has preserved the social stability that underpins the legitimacy of the Communist Party. From a demand side perspective, the manufacturing sector’s strong performance has boosted the wealth and influence of coastal regional governments, spurring them to advocate for an extension of preferential exchange rate policies to their regions from the central government. (b). Policy implications: will the Chinese revalue the renminbi again? Employing the above political-economy approach to China suggests two key implications moving forward. First, it highlights how quickly the Chinese government’s commitment to the peg could wane with a sharp, unexpected shift in global or domestic economic conditions. For example, if the renminbi were to swing from an undervalued to overvalued state due to market concerns about the long-term health of the country’s financial system, regional coastal governments’ support of the fixed exchange rate regime could rapidly dissipate–instead prompting local officials to lobby for a competitiveness-enhancing devaluation. Second, monitoring supply side, ideological shifts in internal Communist Party politics may help broaden our understanding of the domestic political determinants of exchange rate policy within China. An understanding of such determinants may glean an insight into the likelihood that the Chinese government will revalue the renminbi. For example, the tide appears to be shifting in China, with the recent emergence of a new political leadership. Faced with a widening income gap between the coastal and interior regions of China, the newly appointed President Hu Jintao and Prime Minister Wen Jiabao have been advocating a reorientation of government investment, infrastructure projects, and policy preferences toward the interior—highlighting a new emphasis on “a balance between domestic development and opening to the outside world” (Kuhn, 2004). Accordingly, there appears to be a growing willingness among the new leaderships to pursue redistributive policies in China, even with some cost to export driven growth in the coastal regions. In this regard, the authorities have emphasized their intention to increasingly spur domestic consumption. Indeed, People’s Bank of China Governor Zhou Xiaochuan highlighted in a recent speech that “we hope our economy will be driven by domestic consumption” and that China needs to “do more to encourage its people to spend instead of save” (Kurtz, 2005). Although a large-scale revaluation remains unlikely, these political developments suggest that there may be scope for another modest, near-term revaluation of China’s undervalued exchange rate.41 Chinese leaders may want to redistribute some rents from the coastal manufacturing sector to the interior, without significantly risking economic growth and stability. Nevertheless, the horizon for a complete abandonment of the currency peg is longer-term. Ultimately, it depends upon the government’s progress in restoring financial system stability and restructuring the state-owned enterprise sector. Without such reform, the government is unlikely to freely float the exchange rate and risk potential capital flight and social instability in response to any negative developments in these ailing sectors.