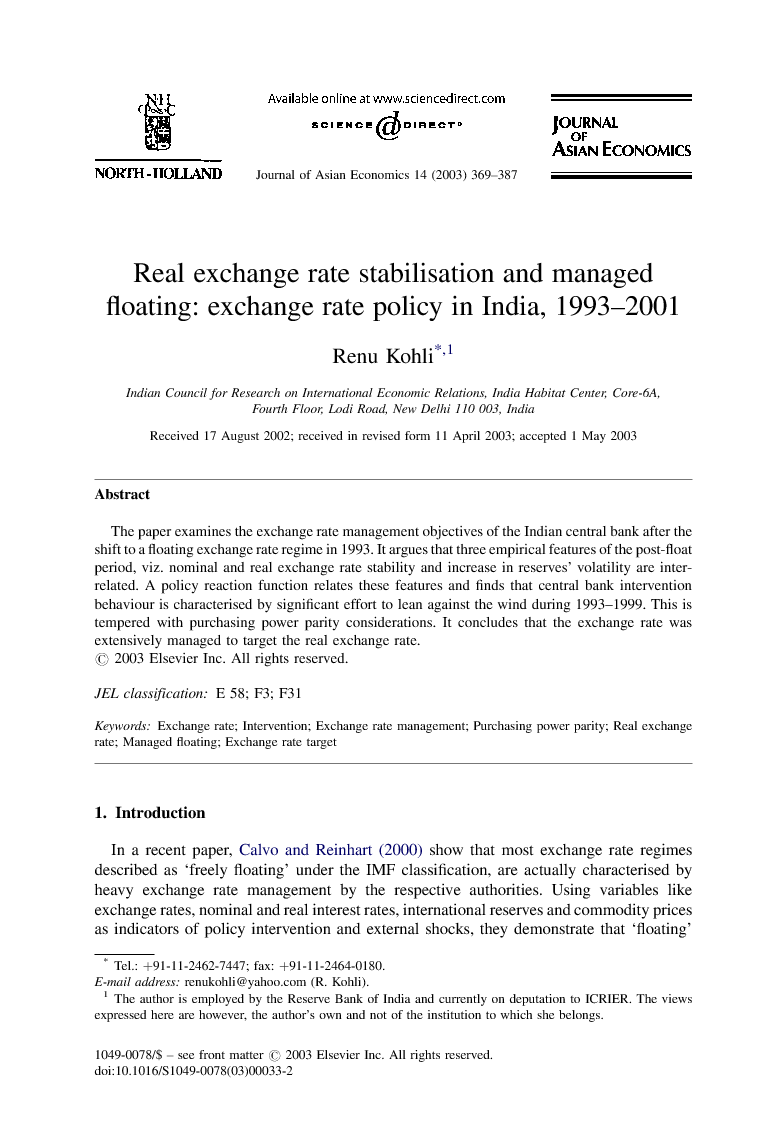 The paper examines the exchange rate management objectives of the Indian central bank after the shift to a floating exchange rate regime in 1993. It argues that three empirical features of the post-float period, viz. nominal and real exchange rate stability and increase in reserves’ volatility are inter-related. A policy reaction function relates these features and finds that central bank intervention behaviour is characterised by significant effort to lean against the wind during 1993–1999. This is tempered with purchasing power parity considerations. It concludes that the exchange rate was extensively managed to target the real exchange rate.

In a recent paper, Calvo and Reinhart (2000) show that most exchange rate regimes described as ‘freely floating’ under the IMF classification, are actually characterised by heavy exchange rate management by the respective authorities. Using variables like exchange rates, nominal and real interest rates, international reserves and commodity prices as indicators of policy intervention and external shocks, they demonstrate that ‘floating’ currency regimes of most emerging market economies more closely resemble ‘fixed’ exchange rate regimes than actual floats. In the light of this evidence they argue that the currently held opinion that fixed exchange rate regimes are dead is largely misplaced. India is amongst one of the countries included in the Calvo and Reinhart sample; the study notes that nominal and real interest rate variability in India is four times that of the US in the period of its float, which suggests active management of the exchange rate. This paper contributes to the evidence contained in the Calvo and Reinhart (2000) paper by empirically demonstrating that the ‘float’ was extensively managed between 1993 and 1999 to achieve nominal and real exchange rate stability despite a policy ostensibly meant to allow the rupee to float. India shifted from an adjustable-peg to a market-based exchange rate regime in 1993.2 Since 1996, its exchange rate regime has been classified as ‘independent floating’ under the IMF nomenclature. The post-float period in India is distinguished by three features: One is the remarkably low exchange rate volatility, which is contrary to the commonly observed rise in volatility as countries switch from fixed to floating exchange rate regimes. Second is the break in the long-term depreciation trend of the real exchange rate. And third is the rise in the scale and frequency of intervention by the central bank in the foreign exchange market. This paper argues that these features are inter-related within a policy response framework. Central bank intervention is assumed to respond to changes in the nominal rupee–dollar exchange rate and a real exchange rate target that reflects deviation from parity. We find that RBI’s intervention behaviour during 1993–1999 is characterised by a significant effort to lean against the wind, tempered with purchasing power parity considerations. This suggests that the central bank sought to realise specific exchange rate policy objectives, viz. nominal and real exchange rate stability, through ‘managing’ the float. The observed low nominal exchange rate variability and tentative validation of purchasing power parity in the post-float period may therefore, be possible outcomes of policy intervention that disallows absorption of external shocks. Moreover, these institutional factors are likely to influence the data, casting doubts about inferences from PPP based models for India and other developing countries that pursue similar policies. The paper is organised as follows. Section 2 reviews India’s exchange rate policy, placing the floating exchange rate regime in perspective with preliminary statistics. Section 3 formulates an implicit reaction function for the RBI and estimates it using single-equation (2SLS) methods. Section 4 demonstrates the impact of exchange rate movements and intervention response upon foreign exchange reserves within a vector auto-regression framework. An impulse response analysis is then conducted on the estimated VAR. Section 5 concludes.

This paper provides evidence that the Indian authorities ‘managed’ the float to achieve specific exchange rate objectives, while declaring a floating exchange rate regime since 1993. A policy response function relating changes in foreign exchange reserves to variations in the nominal rupee–dollar exchange rate and a moving relative (Indo-US) prices’ target reveals significant efforts by the Reserve Bank to lean against the wind and maintain the spot rate in alignment with relative prices. The timing of intervention shows that the size of intervention increases just before or following currency realignment. Moreover, the overvaluation vis-à-vis PPP shown in the paper is consistent with a policy of real exchange rate targeting and the fact that the nominal rate is not allowed to adjust fully in response to changes in inflation differentials. Considering that capital controls existed during this period, with only capital inflows being liberalised, the results are not surprising as the demand for Indian exports and demand for imports by Indian manufacturers would primarily determine the value of the rupee against the dollar. One implication of this result is that if the central bank has indeed been aligning the exchange rate to prices, then purchasing power parity ought to hold, at least for this period. This is confirmed by the PPP tests that we conducted on the data for the corresponding period, the results of which are reported in the table on unit root tests in Appendix A to this paper. The ratio of wholesale prices (India–US) validates absolute PPP for the 1993–2000 period, supporting the hypothesis that parity with foreign price level holds for a more aggregate class of goods and to a large extent, for tradable goods.18 Indeed, the central bank admitted in one of its official reports that the real exchange rate has become mean-reverting (RCF, 1999–2000, p. V-14). An alternate test of the PPP hypothesis is that the real exchange rate be stationary. Tentative evidence on this shows that the unit root hypothesis is accepted for a long time-span from 1960 on both annual and quarterly basis (rows 4 and 5 of unit root tests table in Appendix A). However, splitting the sample from 1993 onwards shows that the data rejects non-stationarity, at least for the 5-country trade-weighted real exchange rate as well as for a series constructed using US and Indian consumer prices (rows 7–10 of unit root tests table in Appendix A). Though the obvious inadequacy of time series representation weakens this conclusion, the long-term plot of the REER, which shows a break in the depreciating trend after 1993 supports this result to some extent. Our finding may thus help explain why the REER has become ‘mean-reverting’. One policy implication of this result is that economic agents, including speculators and market analysts, could be expected to attach considerable weight to PPP as a fundamental determinant of the exchange rate. As a consequence, agents’ expectations could be built around deviations from PPP when the central bank might be expected to effect an ‘adjustment’ in the exchange rate through intervention. These results must however, be interpreted with caution as a stable reaction function during the period of estimation does not necessarily imply similar future responses by the central bank since policy regimes are likely to change as has been pointed out by Lucas (1976). What lessons does this research hold for developing countries in general? This paper shows that the low variability of the rupee during the ‘floating’ period can be explained with reference to the rigidity with which the exchange rate is managed. Though the other side of the coin, viz. external disturbance affecting the real exchange rate, has not been examined in this paper and neither does it attempt to draw any links between exchange rate variability and fluctuations in variables likely to cause such disturbances (like commodity prices), research by other authors like Calvo and Reinhart (2000) does demonstrate the latter to be far more variable. Since exchange rates of such economies do not fully accommodate external shocks, comparisons with the industrialised group of countries whose exchange rates usually do, are naturally limited. This aspect therefore is a natural extension of this research in the future. Finally, empirical properties of the real exchange rate found for industrial economies, are not likely to hold for developing countries, where ‘floating’ currencies tend to be heavily managed. As has been recently shown by Taylor (2000), real exchange rate behaviour varies with the type of regime. Floating regimes exhibit much larger shocks to the real exchange rate and therefore, account for much larger deviations from PPP during these periods. In India, however, the finding is just the reverse. Thus meaningful inferences from PPP-based models for India in particular and for developing economies, which often pursue such policies, in general, are doubtful as the predominance of intervention is likely to influence these studies.