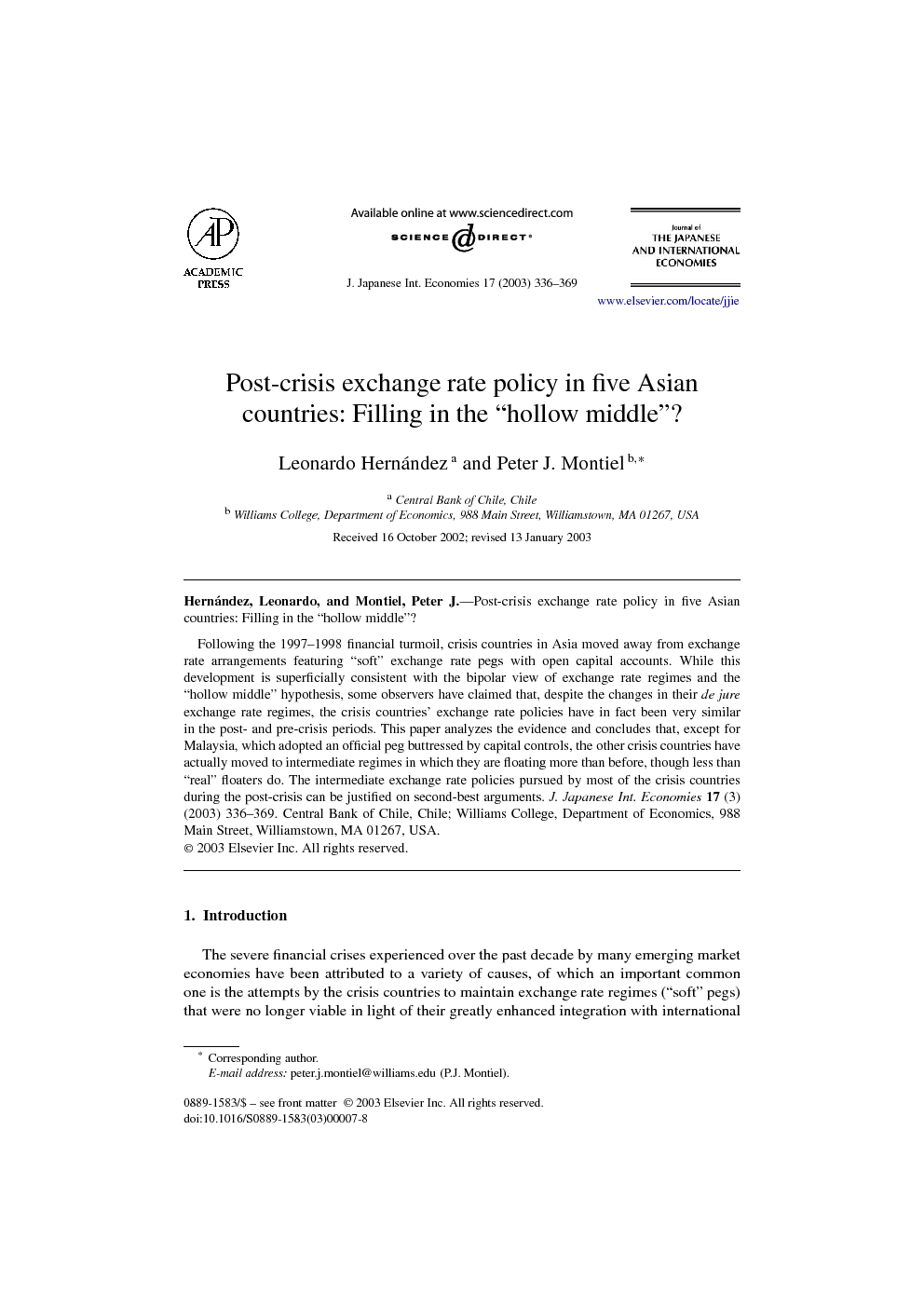 The severe financial crises experienced over the past decade by many emerging market economies have been attributed to a variety of causes, of which an important common one is the attempts by the crisis countries to maintain exchange rate regimes (“soft” pegs) that were no longer viable in light of their greatly enhanced integration with international capital markets. In the context of such enhanced integration, it has been argued, only the polar extremes of floating exchange rates or fixed exchange rates supported by very strong commitment mechanisms (“hard” pegs), can be sustained for extended periods. In other words, the recurrent crises of recent years reflect the inevitable breakdown of intermediate regimes in a financially integrated world. Among the crises of the 1990s, the Asian financial crisis of 1997–1998 has certainly played a key role in generating the perception of a vanishing middle ground for exchange rate regimes in developing countries, a doctrine that has come to be known as the “hollow middle.” The macroeconomic performance of the Asian economies that later succumbed to currency and banking crises (Indonesia, Korea, Malaysia, the Philippines, and Thailand) had previously been hailed as an economic miracle, and active management of the exchange rate in pursuit of the competitiveness objective had often been credited with making an important contribution to their “miraculous” macroeconomic performance. The crisis forced all of these countries to abandon their de facto exchange rate pegs, and the subsequent floats of their currencies were associated with very sharp fluctuations in their values. Thus, if even these economies with such exceptional macroeconomic fundamentals proved unable to sustain a policy of active exchange rate management in a more financially integrated world during the 1990s, prospects would appear to be bleak for other developing countries to do so. More recently, doubts have arisen about post-crisis exchange rate policies in the Asian crisis countries themselves. Several observers have noted that in the wake of their crises, several of these countries may be reverting to exchange rate practices similar to those of the pre-crisis period, in the sense that their authorities have sought to stabilize the values of their currencies against the US dollar without adopting any of the strong commitment mechanisms that would be called for under the doctrine of the “hollow middle.” The worry among such observers is that, in view of the vanishing scope for ‘soft’ peg arrangements under current international financial conditions, resuming such practices in the former crisis countries may make them vulnerable to a repetition of the events of 1997–1998.1 The implied policy advice is that these countries themselves should opt for one of the extreme currency arrangements that their own past experience (and that of others) suggests as the only viable options as long as they remain highly integrated with world capital markets. This paper addresses two issues raised by this recent experience. Its narrower objective is to identify and evaluate post-crisis exchange rate policy in five of the countries that suffered most severely from the Asian financial crisis. For this purpose, we seek to determine the extent to which these countries have indeed reverted to their pre-crisis exchange rate practices, to characterize the exchange rate policies they are currently pursuing, and to evaluate the appropriateness of such policies in light of both contemporary international financial conditions as well as of the post-crisis circumstances of those economies. The broader objective is to draw lessons from that experience for the doctrine of the “hollow middle” for exchange rate policies. The paper is organized as follows. In 2 and 3, we attempt to identify the exchange rate regimes that have prevailed in five former crisis countries—Indonesia, Korea, Malaysia, the Philippines, and Thailand—during the post-crisis period. To eliminate the period of most severe instability associated with the crisis, we define the post-crisis period as 1999–2001.2 Having characterized the exchange rate regimes, we turn in Section 4 to a consideration of the possible objectives that may have been driving the formulation of post-crisis exchange rate policies in the former crisis countries. Our next task, undertaken in Section 5, is to evaluate the objectives and conduct of exchange rate policy in light of the post-crisis circumstances faced by these five economies. Section 6 takes up some considerations that can be expected to influence longer-term exchange rate policies in these economies. In our concluding section we summarize our findings and attempt to draw lessons from the post-crisis experience of the Asian crisis countries for exchange rate management in other developing countries.