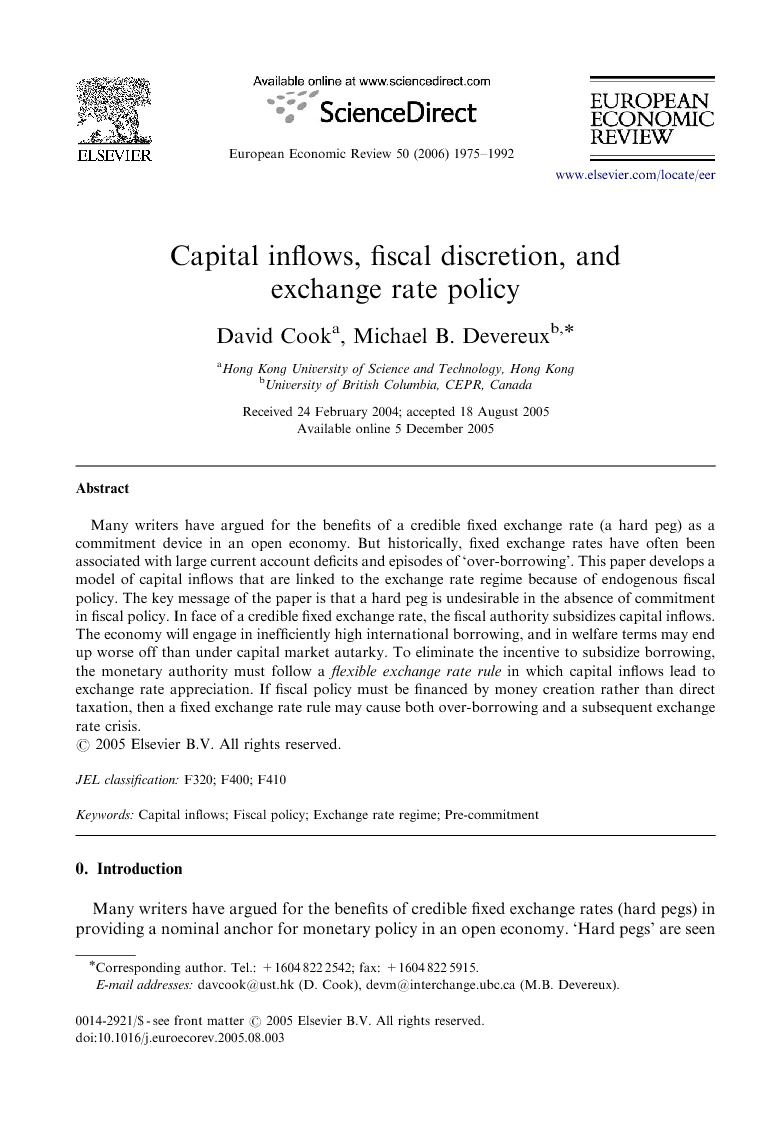 Many writers have argued for the benefits of credible fixed exchange rates (hard pegs) in providing a nominal anchor for monetary policy in an open economy. ‘Hard pegs’ are seen as instilling a commitment in monetary policy (e.g. Calvo, 2000 for emerging markets and Giavazzi and Pagano, 1989 for Europe), particularly in countries with a record of high inflation. But the historical record of hard pegs is mixed. Many countries that have fixed their exchange rates have experienced very large current account deficits, and in some cases, subsequent exchange rate crises. In fact, most of the significant capital inflows into emerging market countries have taken place under fixed exchange rates. This is true of both the Latin American and East Asian economies. Fig. 1 shows that for Argentina, Brazil, and Mexico, episodes of exchange rate stability have typically coincided with large and sustained current account deficits.

This paper explores the linkage between the fixed exchange rate regimes and capital inflows in environment of endogenous fiscal policy.1 The essential message of the paper is that the incentive for government interference in capital markets (through implicit or explicit borrowing guarantees or subsidies) will generally depend on the exchange rate policy. If there is credible commitment in both monetary and fiscal policy, then the exchange rate policy is irrelevant. But, absent commitment in fiscal policy, a credible fixed exchange rate regime (a ‘hard peg’) encourages the fiscal authority to subsidize international borrowing, even in a small economy where the cost of borrowing is fixed by world market forces. In order to avoid this excessive international borrowing, the central bank must follow a flexible exchange rate rule whereby the currency appreciates during episodes of capital inflows. An implication of our argument is that it is important to combine the commitment to a hard peg with limitations on fiscal policy. But this is for quite different reasons than those emphasized in standard first-generation models of currency crises. We need both a hard peg and constraints on fiscal policy not because the presence of government budget deficits threatens the sustainability of the peg, but rather because it is the hard peg itself which gives rise to bad fiscal policy. Alternatively, if constraints on fiscal policy cannot be put in place, we are best off without the hard peg. The argument is developed a simple inter-temporal open economy model. A fiscal authority can tax or subsidize foreign borrowing. We can think of these either as explicit subsidies to domestic borrowers, or implicit guarantees that ultimately represent a liability of government. By assumption, monetary policy is determined by an independent central bank that can pre-commit to an exchange rate rule. If the fiscal authority can also pre-commit, it will never wish to interfere with international capital flows, no matter what the exchange rate policy followed by the central bank. But without pre-commitment, there is an incentive to encourage borrowing by subsidies or guarantees. The underlying distortion pushing the fiscal authority to intervene in capital markets is the unemployment rate. Wages are set in advance by monopoly suppliers of labor so that employment is inefficiently low. By subsidizing capital inflow after wages are set, the fiscal authority attempts to ameliorate this distortion. With a fixed exchange rate rule, the fiscal authority will always wish to subsidize foreign borrowing. As a result the country will have an excessive level of external debt. In fact, in our model a fixed exchange rate leads the economy to end up in a worse welfare position than if it was under complete capital market autarky. While a hard peg should be avoided in an environment where fiscal authorities lack credibility, there is an exchange rate rule which exactly nullifies the lack of fiscal pre-commitment. If this rule is followed by a central bank, it offsets the incentive for the fiscal authority to intervene in capital markets, allowing the economy to fully exploit the benefit from international capital flows. The key ingredient behind this rule is that the exchange rate should appreciate in response to capital inflows. We extend the model to show that the combination of fixed exchange rates, absence of pre-commitment in fiscal policy, and a requirement that the government needs to finance its activity with money creation can generate a joint capital-market-currency crisis. The key feature of this extended model is that this joint crisis is caused solely by the initial imposition of a fixed exchange rate regime. Without an initial peg, there is no over-borrowing, and no subsequent currency collapse. In fact, without the peg, the exchange rate can be kept stable throughout. The paper is related to a number of literatures on exchange rates and fiscal policy. Many writers have noted that exchange rate pegs used to eliminate high inflations may give rise to overvaluation and excessive current account deficits (Edwards, 2000). Others have emphasized the tendency for fixed exchange rates to give rise to excessive, unhedged foreign currency borrowing (McKinnon and Pill, 1999; Burnside et al., 2001a). This in turn may give rise to ‘Fear of Floating’, as in Calvo and Reinhart (2002). From a different perspective, there is a debate about whether a credible fixed exchange rate can itself instil fiscal discipline (see Tornell and Velasco, 1995). We discuss the relationship of the paper to these questions in more detail below. The paper is organized as follows. The next section develops the basic model. Section 2 shows the results with pre-commitment. Section 3 deals with the no commitment case. Section 4 extends the analysis to show that excessive capital inflows may generate subsequent currency crises. Section 5 discusses the relationship of the paper to the literature on exchange rate regimes and fiscal policy. Some conclusions are then offered.