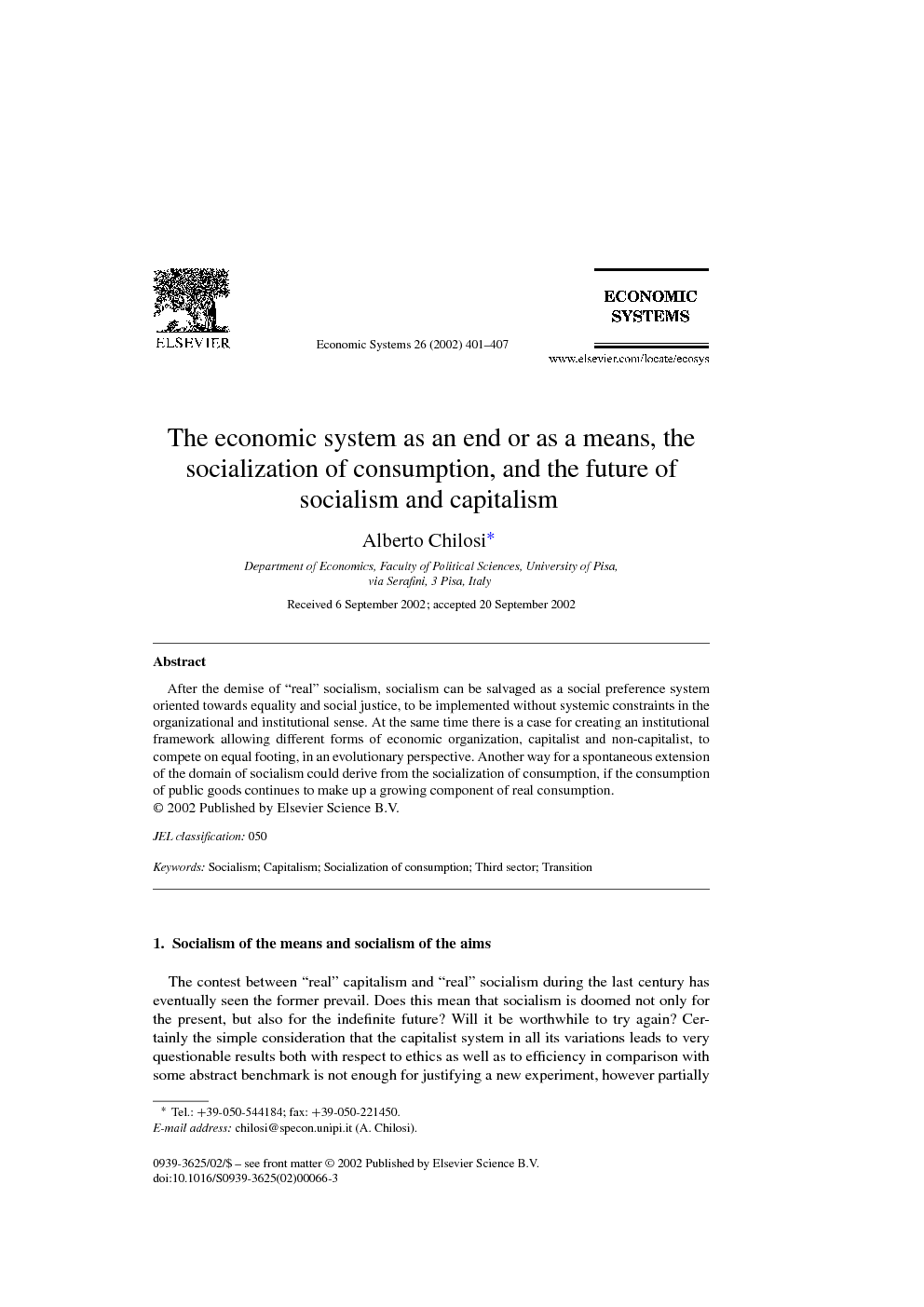 After the demise of “real” socialism, socialism can be salvaged as a social preference system oriented towards equality and social justice, to be implemented without systemic constraints in the organizational and institutional sense. At the same time there is a case for creating an institutional framework allowing different forms of economic organization, capitalist and non-capitalist, to compete on equal footing, in an evolutionary perspective. Another way for a spontaneous extension of the domain of socialism could derive from the socialization of consumption, if the consumption of public goods continues to make up a growing component of real consumption.

The contest between “real” capitalism and “real” socialism during the last century has eventually seen the former prevail. Does this mean that socialism is doomed not only for the present, but also for the indefinite future? Will it be worthwhile to try again? Certainly the simple consideration that the capitalist system in all its variations leads to very questionable results both with respect to ethics as well as to efficiency in comparison with some abstract benchmark is not enough for justifying a new experiment, however partially seen. The view that the proved imperfection of a system is a sufficient reason for the establishment of a different one after the removal (be it forcible or peaceful) of the first, is a fallacy which has led to tragic consequences, but which still continues to find new supporters (such as lately, apparently, the so-called no-globals, with respect to the regime of international economic relations). Indeed, one can see the economic system and the institutions that make it up and qualify its specific variety as a means, empirically adaptable instruments rather than an end in itself, in opposition to the alternative viewpoint attributing an intrinsic value to the choice of a system, because of an ethical judgement or in consideration of the ultimate ends that the system is supposed to pursue. Owing to the inevitable shortcomings of really existing systems and the experience of the last century, the only reasonable perspective appears to be the instrumental and pragmatic approach towards systems and institutions, whereby the latter are not considered to have intrinsic value, and their merit lies in what they allow to reach in a limited horizon rather than in what they are alleged to bring about in an indefinite future. Moreover, one must be aware that the consequences of introducing new institutions depend on the specific historical circumstances, as is shown by the different impact of the introduction of analogous institutions in different countries. (In particular, the introduction or restoration of market institutions has in general produced better results in the countries where a functioning market economy was present in a not too distant past.) Turning to socialism in this perspective, we can make a distinction between socialism of the means and socialism of the aims. The means consist, on the negative side, in the prohibition of private entrepreneurial activity, and of private ownership of productive assets. The positive part is the substitution of public or “social” ownership and entrepreneurship for private (“capitalist”) ownership and entrepreneurship. But socialism can also be seen as a set of aims, such as equality, or social security, the same that would usually be advocated for justifying the adoption of some variety of socialism of means, apart from the Marxist justification of socialism as being a historically inevitable, much more productive economic system, or those based on ethical considerations (such as those concerning the abolition of “exploitation”). Theoretically speaking, these aims translate into preferences over social states. More precisely, one may characterize as “socialist” a subset of the possible preference sets, the set of those preference sets that are relatively more informed by socialist aims. Thus, one may conceive a socialism of aims, independent in principle from the choice of a particular social system through which socialist aims can be pursued, especially of the socialism of the means. In this case the socialism of the aims, not being constrained to a particular choice of means, acquires in theory a degree of freedom, and its pursuit should bring about outcomes superior (in the weak sense of not being inferior) to those that can be achieved through the constrained pursuit of socialism, given the (“socialist”) preference system. In this perspective what is left of socialism, possibly in a context where formal capitalist institutions prevail because they are seen as more suitable for achieving preferred social outcomes on the basis of the given “socialist” preference system, is the specificity of the aims that are pursued, where socialist aims such as equality or social security obviously cannot be exclusive, but must be traded off with alternative relevant ones, such as material affluence or span of choice. Summing up, in this perspective, socialism is characterized by the nature or the weighting of the objectives, independently of the institutional means that are used for their pursuit.

Finally, there are some considerations to be made concerning the changing nature of consumption. There is apparently a trend nowadays towards an increase in the relative importance of public goods, as a consequence of the changes in technology and tastes, thus increasing the scope for direct, or indirect, public provision. Among the possible characteristics of a socialist system (as indicated for instance by Marx in the Gotha Programme, and put at the centre of construction of socialism in the 1961 Program of the Communist Party of the USSR) there is the tendency towards socialization of consumption, meaning the special merit attributed to publicly provided vs. private goods; insofar as the access to the former is not rationed through the market, this could in principle also have an egalitarian impact. This also applies to goods that are intrinsically public in an economic sense, as long as they are pure (non-excludable), or there is no exclusion. The recent expansion of multimedia products that have some intrinsic characteristics of public goods (radio and TV broadcasting, Internet) has been financed to a great extent through the simultaneous issuing of what we may call public externalities, namely externalities that have mainly the characteristics of a public good, as far as non-rivalry and non-excludability are concerned (even if non-excludability is partially jeopardized by remote control), but which the receiving party can variously consider either public goods or public bads, or indifferent, and which for producers are the principal source of revenues. This financing is, however, limited by the overall amount of advertising budgets. There are some good theoretical reasons why these limits should be pushed forward through public financing or direct public production (in particular advertising-free production for the benefit of those, like the present author, for whom radio and TV advertising is definitely a public bad). Moreover, the channels of delivery of those products (in particular cabling) can acquire the characteristic of natural monopolies, which in turn can justify a public provision or public supervision. (Indeed, the interesting experiment of infrastructural privatization, which was made in the UK with Railtrack, has clearly shown the limits of infrastructural privatization.) Apparently we have entered a period where the nature of consumption is quite different from those times where, even in the relatively more prosperous countries, the great bulk of consumption was made up by predominantly private goods (food, first of all, but also clothes, shelter and transportation). If the relative importance of public (or semi-public) goods continues to grow, this could lead to a fiscal erosion of the tax base, but perhaps also, in the future, to a greater equality in consumer levels, as the constraining factor becomes (in the more prosperous countries at least) time, rather than purchasing power. This implies an involuntary but important element of socialism, because of the socialization of a growing part of consumption, which is basically allocated without being rationed through purchasing power. (There is a kind of paradox here. In most cases the new goods are enjoyed individually, in the intimacy of one’s homes, even if through the access to a virtual agora, while some of the kinds of consumption that the new ones are displacing—theatres, cinemas, concerts, conferences—represent forms of collective enjoyment, even if their prevailing character is, economically speaking, of being private goods.) The incentive problem of a society where an ever-increasing part of consumption is made up of public goods, for the enjoyment of which the only relevant constraint is the available free time, is obvious. The relative utility of leisure increases, with increasing negative effects on labor supply and on the creation of the tax base needed to finance, among others, the production of public goods themselves.