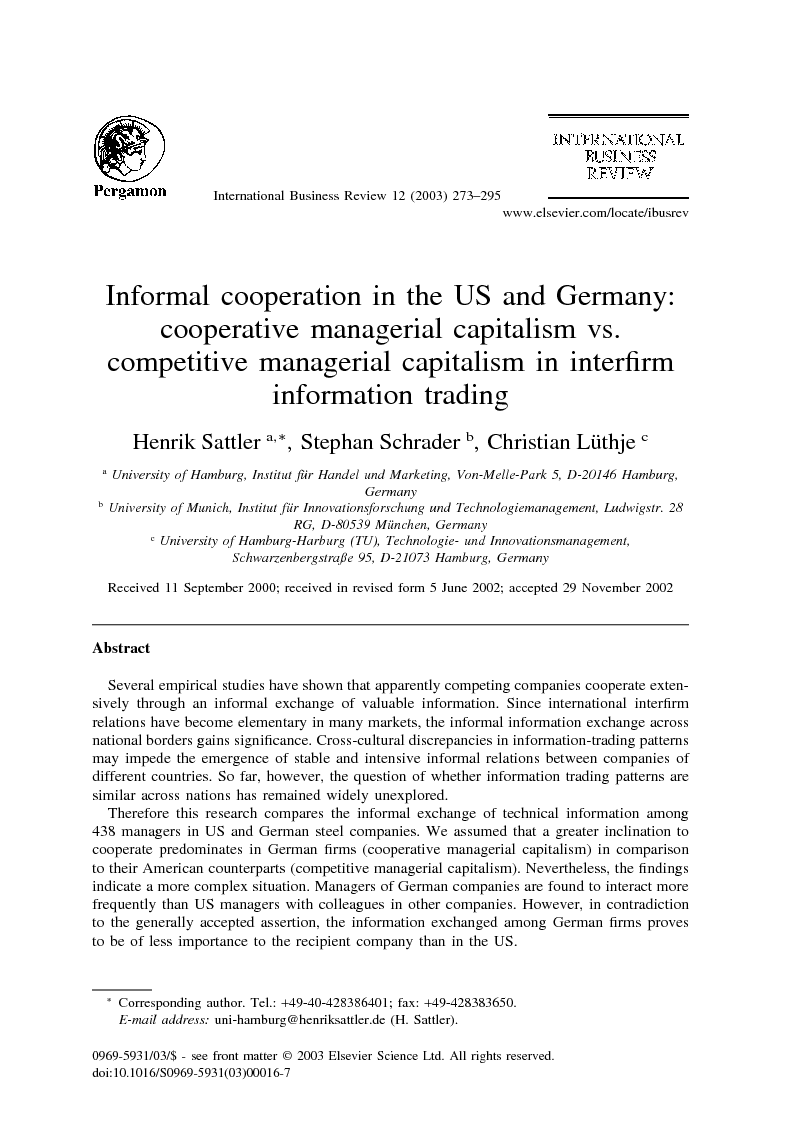 Several empirical studies have shown that apparently competing companies cooperate extensively through an informal exchange of valuable information. Since international interfirm relations have become elementary in many markets, the informal information exchange across national borders gains significance. Cross-cultural discrepancies in information-trading patterns may impede the emergence of stable and intensive informal relations between companies of different countries. So far, however, the question of whether information trading patterns are similar across nations has remained widely unexplored. Therefore this research compares the informal exchange of technical information among 438 managers in US and German steel companies. We assumed that a greater inclination to cooperate predominates in German firms (cooperative managerial capitalism) in comparison to their American counterparts (competitive managerial capitalism). Nevertheless, the findings indicate a more complex situation. Managers of German companies are found to interact more frequently than US managers with colleagues in other companies. However, in contradiction to the generally accepted assertion, the information exchanged among German firms proves to be of less importance to the recipient company than in the US.

Cooperation between firms can take on many forms from highly formalized joint ventures to rather informal agreements (Fontanari, 1996). The exchange of information is normally at the center of these cooperative activities (Porter, 1990). Regardless of whether the cooperation is formal or not, the information exchange itself frequently occurs without prior explicit contractual agreement. To reach a contract regulating the information trading can face numerous nearly insurmountable difficulties. This is especially the case if the information to be exchanged can only be vaguely described ex ante, a situation especially relevant in innovation collaborations (Arrow, 1971, Carter, 1989 and Chiesa and Manzini 1998). Even if explicit contracts are used to govern interfirm information transfer, the partners frequently still have a considerable degree of freedom (Hamel, Doz, & Prahalad, 1989). Informal information exchange between companies within an industry segment (horizontal cooperation) is in the focus of this paper. This mode of cooperation is characterized by an inherent tension between cooperation and competition. On the one hand, firms within an industry face similar problems and therefore can benefit from each other’s knowledge and experience. On the other hand, companies in direct competition have to prevent the leaking of information that jeopardizes their competitive advantage. Thus, the question of whether cooperation will yield advantages or disadvantages becomes particularly salient. While there has been significant research on the mechanism of informal information trading (Rogers, 1982, von Hippel, 1987, Schrader, 1991 and von Hippel and Schrader, 1996), cross-cultural aspects received only little empirical examination. It is widely unknown if international differences play an important role in this context. In times of increasing concern about industrial globalization, more attention has to be paid on comparisons of information trading styles in countries around the world. New findings with regard to this topic could help top management to implement suitable organizational settings that guide international information-trading in the desired direction. In the present paper a survey of employees in companies of the US and the German steel industries is conducted to explore cross-cultural differences in informal information trading styles. Chandler (1990) sees a major difference between industrial companies in Germany and the United States in their general attitude to maintain interfirm relationships with the home competitors. He and several other authors assert that German business life is characterized as substantially richer in various kinds of interfirm cooperation than that in the US (cooperative managerial capitalism vs. competitive managerial capitalism). However, these investigations generally observe only general tendencies in horizontal cooperation of companies from different national cultures. To our knowledge, no researchers have compared the behavior related to information exchange across these two cultures. The present study therefore focuses on the specific instance of interfirm informal information trading in the United States and Germany. In the following section, the theoretical grounding of the study is reviewed. After illustrating the empirical relevance of informal information exchange, we discuss possible differences in information exchange patterns between Germany and America by collecting empirical and anecdotal evidence. In Section 3, the research method is outlined. The findings are presented in Section 4. In the final Section 5, we discuss the implications of the findings.

In this paper, we have shown that employees frequently provide information informally to colleagues in other, often rival, companies. The empirical investigation of informal information trading decisions by managers in the German and US steel industry shows that—at least in this industry—managers make exchange decisions that tend to be in their companies’ best interest. The employees are more likely to pass requested information if the exclusivity value of the information provided is not reduced and/or if the expected value of the information to be received in return is large (reputation effect). Information does not ‘leak’ out, but is actually traded by the employees. Important cross-cultural differences can be observed. However, the results presented here stand, partly, in direct contradiction to the generally accepted assertion that German firms are more inclined to cooperate than their US–American counterparts. We have found that in accordance with expectations, employees in German companies exchange information across firm boundaries more frequently than their American counterparts. However, the information exchanged appeared to be less important to the recipients in Germany than in the US. The main explanation for this unexpected finding can be drawn from the cross-cultural difference in attitudes towards perceived risk. If information of high importance is requested, the reciprocal character of information trading gains significance. The inclination of managers to provide important and helpful information only increases, if they expect to receive valuable information in return. However, since the acts of giving and receiving information are normally separated in time, the employees face considerable uncertainty. The information provider can never be sure to profit by the transfer of information. Previous research has found that German firms and their employees are more risk averse than US firms and employees (Cummings, Harnett and Stevens, 1971, Bass and Burger, 1979 and Hofstede, 1980). It could be argued that the lower risk tolerance, in turn, reduces the willingness of German managers to pass important information. The tendency of German employees to keep secret information that would be important to potential recipients, is a severe problem, even without considering cross-cultural differences. To withhold important information reduces the capability of all participants to profit from informal information transfer. As Schrader (1995) showed, precisely this passing on of very helpful information increases the willingness of the recipient to make his information available in return. If managers of German companies have the tendency to not transfer ceteris paribus important information, they are neglecting a crucial component for the creation of more cooperative relationships. This problem gains even more significance, taking into account the cross-cultural differences between Germany and the US. A growing literature, for instance, in the field of international negotiation (Adler et al., 1992, Shenas, 1993 and Ang et al., 2000) and global strategic alliances (Parkhe, 1991) show that differences between participating parties lead to interference in interaction. What is evident for formal negotiations and alliances should also be true for informal information trading. By passing important information to an information inquirer, the information provider trusts in the reciprocity norm. However, since the perceived obligation to provide similar, important assistance in the future seems to differ in Germany and the United States, the inquiring party may not come up to the expectations of the information provider. The probability for disturbances in information trading and frustration in informal relations should increase, thereby impeding the establishment of effective and stable exchange patterns across national boundaries. Considering that worldwide formal alliances and informal relationships have become elementary in many markets, top management is well advised to not neglect this problem. Suitable measures have to be established to foster informal information trading and to ensure that the employees act in the firms’ best interest. Middle level managers should be helped to recognize the chance of reciprocal behavior of the information requiring party (Axelrod, 1984 and Parkhe, 1993). One solution is to encourage the employees to start information trading with colleagues of other departments within their own firm. The experience to obtain valuable information in return may lead to an effective recognition of the iterative character of information trading. Another possibility is to support the managers to transfer only a part of the requested information in order to test the reciprocal behavior of the inquiring party. In sum, top management has to enhance the frequency of interactions to foster the recognition of reciprocal behavior (Axelrod, 1984). It is often asserted that mutual trust and a good reputation of the participating parties enhance the willingness to cooperate (e.g. Parkhe, 1993). Therefore direct communication between middle managers of different companies can be fruitful to strengthen informal information trading networks. Top management would be well advised to make international personal contacts possible for subordinated managers (e.g. participation at international conferences and visits to fairs). A concentration of the trading function in a few individuals within the company provides an organizational solution that both enhances stable information trading networks and ensures that the employees still act in their firm’s best interest (Schrader, 1995). On the one hand, this practice increases the frequency of interactions between employees of competing companies, making it easier to recognize the reciprocal character of information exchange and to develop trust between the participants. On the other hand, the concentration helps to train the responsible employees to act in the firm’s interest. Furthermore, top management can easily gain a firm wide overview of their trading relationships, helping to establish control procedures in order to impede the disadvantageous transfer of information. Thus, the concentration of the information exchange function on few ‘gatekeepers’ seems helpful in terms of monitoring information flows between competing companies. Informal communities of interaction are put on a more formal basis to ensure a fit of the informal knowledge creation and the firm’s strategy (Nonaka, 1994).