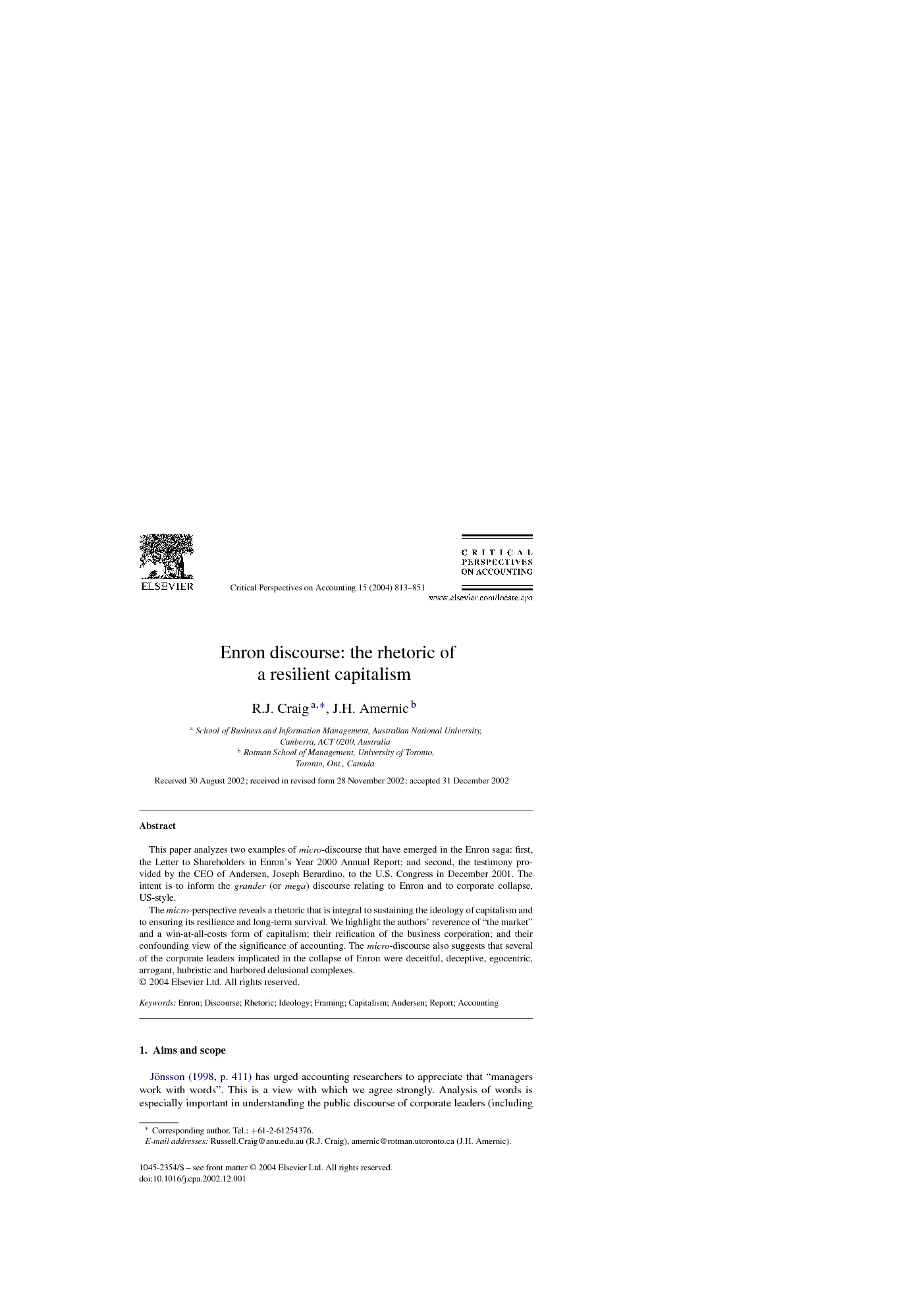 This paper analyzes two examples of micro-discourse that have emerged in the Enron saga: first, the Letter to Shareholders in Enron’s Year 2000 Annual Report; and second, the testimony provided by the CEO of Andersen, Joseph Berardino, to the U.S. Congress in December 2001. The intent is to inform the grander (or mega) discourse relating to Enron and to corporate collapse, US-style. The micro-perspective reveals a rhetoric that is integral to sustaining the ideology of capitalism and to ensuring its resilience and long-term survival. We highlight the authors’ reverence of “the market” and a win-at-all-costs form of capitalism; their reification of the business corporation; and their confounding view of the significance of accounting. The micro-discourse also suggests that several of the corporate leaders implicated in the collapse of Enron were deceitful, deceptive, egocentric, arrogant, hubristic and harbored delusional complexes.

Jönsson (1998, p. 411) has urged accounting researchers to appreciate that “managers work with words”. This is a view with which we agree strongly. Analysis of words is especially important in understanding the public discourse of corporate leaders (including their accounting-related discourse), since their written and verbal text contributes to the “battery of belief-forming institutions” in society (Amernic and Craig, 2001, Den Hartog and Verburg, 1997 and Tinker, 1985, p. 82). Importantly, as Carrier (1997) has observed, the words of corporate leaders help to legitimate the current, dominant discourse of the market. Analysis of managers’ words is important also since the contemporary universe of discourse does not permit or encourage discussion of public issues from a diverse variety of perspectives (Anderson and Prelli, 2001, p. 73). It privileges some perspectives while marginalizing and excluding others. The contemporary universe of business-related discourse is not “open” in any meaningful sense. Rather, it is perverse. It privileges language and thought rooted in managerial capitalism to help form an ideology-sustaining rhetoric that is “part and parcel of the reproduction and transformation of … symbolic order” (Harvey, 1990, p. 355). Intuitively, such perverse privileging of business-related discourse seems to be most apparent during conditions of crisis or disruption of capitalism, such as that occasioned by Enron.1 Accordingly, we analyze two key examples of accounting-laden Enron-discourse to reveal its potential to serve as a privileging ideology-sustaining rhetoric. The two examples are first, the Letter to Stockholders in Enron’s 2000 Annual Report that was issued in the early months of 2001; and second, the testimony provided by Andersen’s CEO, Joseph Berardino, in his appearance before the U.S. House of Representatives Committee on Financial Services on December 12, 2001.2 Our central purpose is to show how the frequently overlooked micro-level analysis of discourse can complement and inform understandings usually based on grand or mega approaches to discourse analysis (Alvesson and Karreman, 2000). This seems a particularly important task in the unfolding Enron saga. We show the potential of micro-level discourse analysis to help better understand Enron—especially by revealing the privileging rhetorical and ideological agendas of corporate leaders. The remainder of this section establishes the general contextual setting within which our two examples of discourse were made. Section 2 then establishes the importance of scrutinizing CEO discourse at the micro-level as a means of contributing understanding to an unfolding ‘grander’ Enron-discourse. In Section 3, we analyze the Letter to Shareholders that appeared in Enron’s last annual report prior to its collapse (for the year 2000). Section 4 analyzes how Andersen CEO Berardino’s testimony to the U.S. House of Representatives Financial Services Committee, employed framing as a rhetorical device. We then explore the “rhetoric of accounting” in his testimony. Section 5 discusses some of the important features and commonalities that can be drawn from our micro-level analysis of CEO discourse, and how these can inform broader understandings of Enron and Enron-discourse as social phenomena

We contend that Enron-discourse is not emblematic of a disruption in capitalism, but rather is emblematic of a resilient capitalism. The larger, mega-discourse seems to reflect this: that capitalism, as a basic model of economic organisation and incentive, is indubitably strong and (allegedly) admirable … it simply has a temporary flaw, exposed by Enron (and now Worldcom?), and needs some “tweaking” or fine-tuning if it is to achieve its full potential. Our close reading has exposed examples of the inconsistencies, silences, irrationalities, and rhetorical tactics at play in the micro-discourse of the shareholders’ letter and Berardino’s Congressional testimony. It helps reveal, at a fundamental level, an underlying commitment to views of companies, humans, and accounting, that very conceivably helped to influence the larger, mega-discourse. Understanding of the larger, mega-discourse, and how it has been informed, is revealed in the two micro-discourses in two broad ways. First, the micro-discourse reveals an elevation of the concept of the MARKET and of a ruthless, win-at-all-costs form of capitalism, to become the ultimate and appropriate arbiters of social decisions. In doing so, business corporations are reified. Consequently, it is not surprising that those who lead these reified corporations are then prone to bask in the reflected glow generated. Our two examples show CEOs engaging in a hubristic discourse, laden with arrogance, self-aggrandizement, hyperbole, deceit, puffery, egocentricity and single-mindedness. Skilling and Lay, in particular, engage in a micro-discourse consistent with them being CEOs with delusional complexes in charge of a psychotic organization. The micro-discourse of Skilling and Lay seems consistent with them being instruments of, or responding to, grander delusions about Enron. An anonymous author, writing in The Economist magazine, described this delusion as one that prompted investors to be “so entranced by their surging wealth that they more or less willed companies to lie to them. ‘Pro forma’ earnings? Fine. Bald-faced deception? Pile it on. Whatever it takes to keep the good news coming.” (Anon, 2002, p. 13). Second, is a somewhat confounding view of the role of accounting and the prominence it should be given. On one hand (when reported profits and stock prices are good), accounting is seen as a lens by which an underlying reality may be discerned and CEOs and corporations are compelled to be “laser-focused” on earnings per share. But on the other hand (after companies collapse?), the view is that accounting should assume a persona non-grata status; that accounting is something not for the “chattering masses” and the “common herd” of stockholders and stakeholders. Rather, it is something for the cognoscenti, and should be marginalized on the periphery of popular debate because of its technical incomprehensibility. So, the ACCOUNTING AS TRUTH TELLING LENS metaphor is a powerful rhetorical device in which the “lens” is fickle and sensitive to the interests and sustainability of capitalism. Accounting, as a truth telling LENS, is to be deployed selectively in the interests of sustaining capitalism. This mega-discourse seems remarkable in its consistency both before and after Enron, and including emerging mega-discourse stories about Enron (such as the one in the Bank of International Settlements 72nd annual report of 2002, referred to earlier). But a common feature seems to have been the lack of penetrating critique of the entrenched pervading ideologies and cultures. The mega-discourse seems to have been resistant to real scrutiny and debate. There has been little penetration beyond the veneer of the mechanisms and manifestations of capitalism. This suggests that, rather than Enron-discourse representing a disruption in capitalism, it merely represents capitalism’s ability to change surface form and to mutate in response to (periodic) crises (Harvey, 1990) and “boom and bust” cycles. The history of corporate failure is full of similar examples of the resilience of capitalism and its capacity to mutate and survive in response to crisis and scandal. (Two such examples are the South Seas Bubble of 1720 and the Great Stock Market Crash of 1929.) What seems destined to emerge from Enron is a slightly transformed capitalism, but nonetheless, capitalism operating otherwise as business as usual. In this context, micro-discourse analysis of the type conducted here should be important because of its capacity to inform the grand- or mega-discourse and to highlight features that might otherwise have gone unnoticed. Here, such micro-analysis highlights values that are the antithesis of a cooperative, caring, society. It also brings to prominence the perverse role of accounting as a handmaiden of capitalist triumphalism.