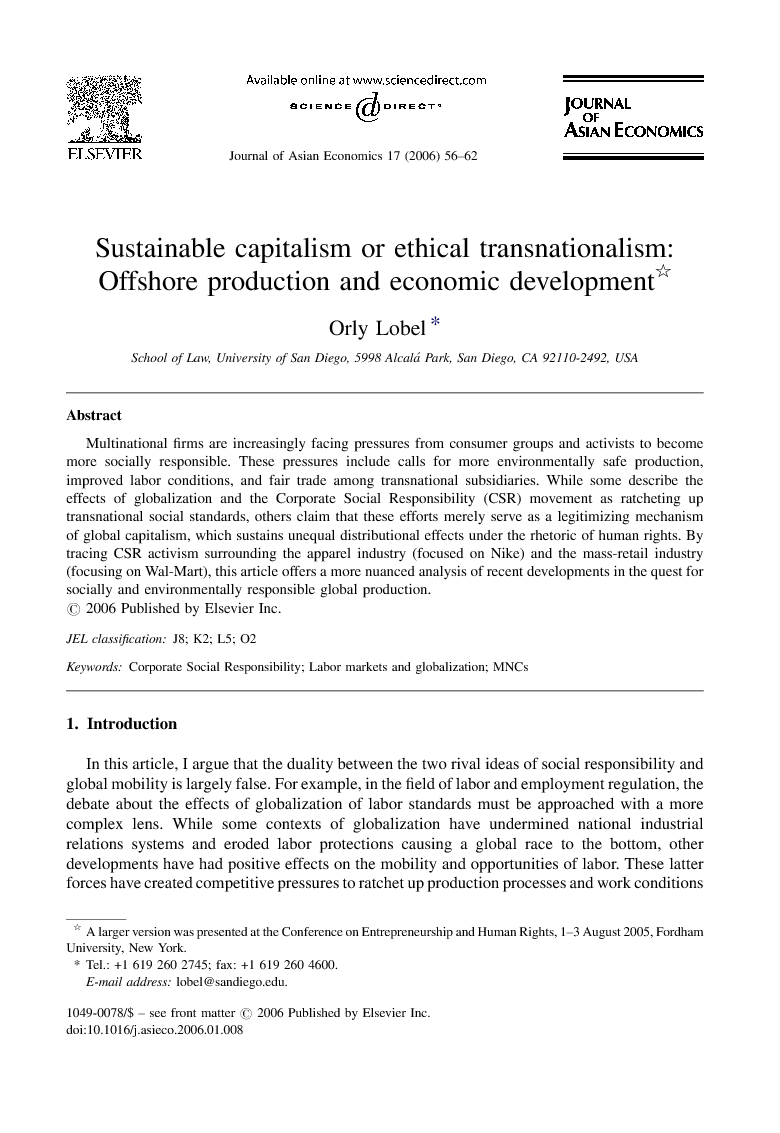 Multinational firms are increasingly facing pressures from consumer groups and activists to become more socially responsible. These pressures include calls for more environmentally safe production, improved labor conditions, and fair trade among transnational subsidiaries. While some describe the effects of globalization and the Corporate Social Responsibility (CSR) movement as ratcheting up transnational social standards, others claim that these efforts merely serve as a legitimizing mechanism of global capitalism, which sustains unequal distributional effects under the rhetoric of human rights. By tracing CSR activism surrounding the apparel industry (focused on Nike) and the mass-retail industry (focusing on Wal-Mart), this article offers a more nuanced analysis of recent developments in the quest for socially and environmentally responsible global production.

n this article, I argue that the duality between the two rival ideas of social responsibility and global mobility is largely false. For example, in the field of labor and employment regulation, the debate about the effects of globalization of labor standards must be approached with a more complex lens. While some contexts of globalization have undermined national industrial relations systems and eroded labor protections causing a global race to the bottom, other developments have had positive effects on the mobility and opportunities of labor. These latter forces have created competitive pressures to ratchet up production processes and work conditions and have pushed forward skills, training and economic development. Importantly, the mere debate about globalization – is it good or bad? – is largely archaic. Scholars of trade and the international and transnational political economy must recognize that the train of globalization has already left the station. Similarly, the idea that we can choose between forms of activism and regulation, between public legal regimes and voluntary private initiatives, or between domestic and international norms, is misleading. Most legal regimes are composed of public and private norms. The task then, for students of globalization and human rights, is to produce more nuanced analysis of mechanisms, incentives, and strategies for promoting social standards. In the following sections, I offer some observations from my studies of labor standards and multinational corporations (MNCs), as well as my studies of employment law and work regulation in various legal systems. I argue that these often-false ideological left/right dichotomies in the controversies surrounding globalization and human rights impede our abilities to find common grounds and apply lessons about socially responsible global production. A primary example for this is the choice between hard and soft strategies for regulation. There is a range of different frameworks and mechanisms with which the question of global standards can be approached. These include conventional domestic law, through court litigation or administrative regulatory enforcement, international law, human rights non-governmental activism, and transnational labor networks. Supplementing conventional legal protections, an emerging school of thought within the legal academy argues that distinct from the approach of formal domestic and international laws in attempting to prevent a race to the bottom, there can be an effective framework for promoting labor practices that seeks to promote a “race to the top,” through privatized, softer approaches to work standards (Lobel, 2004; Sabel, Fung, & O’Rourke, 2001). This framework favors the adoption of “best practices” that will raise labor standards and create a positive spill over from multinational corporations to domestic firms. The Corporate Social Responsibility (CSR) movement demands that corporations, because of their dominance as global institutions, address social and environmental problems around the world. Increasingly, as a response to public pressure from consumers, investors, unions, and NGOs, corporate codes of conduct are voluntarily adopted by MNCs. The main criticism, however, of these approaches is ineffective implementation, the absence of monitoring, and lack of incentives to comply. Yet, as law and society scholars have shown in various contexts, legal strategies must be understood as part of a dynamic and complex set of strategies, from both the public and private sectors, which bring about social change. In the following sections, I will demonstrate these complexities by looking at two paradigmatic examples for the push for Corporate Social Responsibility: the apparel industry during the 1990s and the mass-retail industry at the beginning of the 21st century. Both contexts teach us that the past decades have seen significant changes in the types of demands the human rights community can make on the business community. By comparing the 1990s with 21st century activism, I will offer observations on the transformations in the scope of legitimate practices in the global arena and describe the frontiers of transnational social justice. In particular, I will demonstrate these developments through two paradigmatic corporations that have been the target of human rights investigation, media attention, litigation, grassroot consumer action: Nike and Wal-Mart.

While CSR campaigns that have focused on paradigmatic MNCs – Nike in the 1990s and Wal-Mart in the 2000s – have had positive effects, there are disadvantages of using iconic corporate symbols to attain larger goals. Activists risk reducing the message of human rights to the single context of a specific firm. Anti-sweatshop and social responsibility campaigns should beware of making the icon into the singled out exceptional target. As such, Nike in the 1990s often became the sole focus of consumers, losing site of the greater goal of economic development and social responsibility. While Nike products were often produced under exploitative conditions, other corporations, remaining below consumers’ radar, were also pervasively involved in such conditions. Similarly, the choice of abusive practices against which to struggle has proven a continuous challenge. For example, the focus on child labor risks obscuring the difficult work conditions all workers face in certain manufacturing plants. Finally, an important lesson that grows from a bird's eye exploration of recent decades of transnational production is the linkages between North and South countries. In the past, the human rights movement has been understood to universalize social consciousness, yet much of the critique against a unified movement has been the conceptual and economic gaps between Northern and Southern regions. Often, activists from developed countries feared they would be understood as protectionist if they demanded higher production standards for developing countries. The context of Wal-Mart illuminates how a North/South divide is too simplified in several ways. First, the intense competition for development today occurs in effect among developing countries themselves. Wal-Mart's demand for lowered production costs in fact pits factories in developing countries in Asia against each other, primarily India against China and both these two larger countries against smaller nations such as Vietnam, Bangladesh, and Taiwan. Second, even when jobs are not outsourced, the constant threat of the possibility of outsourcing creates downward pressures around the globe. The ability to move around the world means, for example, that anti-union tactics are quite easily employed. Once successful union efforts are identified in one worksite, a company can quickly move to shut down the plant and relocate. This means that workers are less likely to attempt organization in the first place. A third way in which North/South divides are challenged by today's realities is the growing existence of underground economies in developed countries. Globalization has meant not only capital flow from developed to developing countries, but also rapid migration flows from the developing countries to developed countries. As a result, global metropolitans experience informal sectors that are often described as “the third world within the first,” where exploitative employment practices are common. These realities of globalization and transnational networks present however not only challenges but also opportunities. The social responsibility campaigns, which have linked between low prices and unfair social practices allow consumers, investors, workers, and community organizers to find common ground for broad-based alliances. Moreover, the Internet offers a new frontier for social responsibility, both by allowing greater transparency and by reducing barriers of access and entry into social activism. The greatest challenge is to ensure that cooperative initiatives have long-term effectiveness and staying power in a global setting. The expanding commitment to the concept of a ‘Triple Bottom Line’ – financial, social, and environmental performance – promises to engage governments, industries, and civil societies in finding the fine balance between financial profitability and key social and environmental goals.