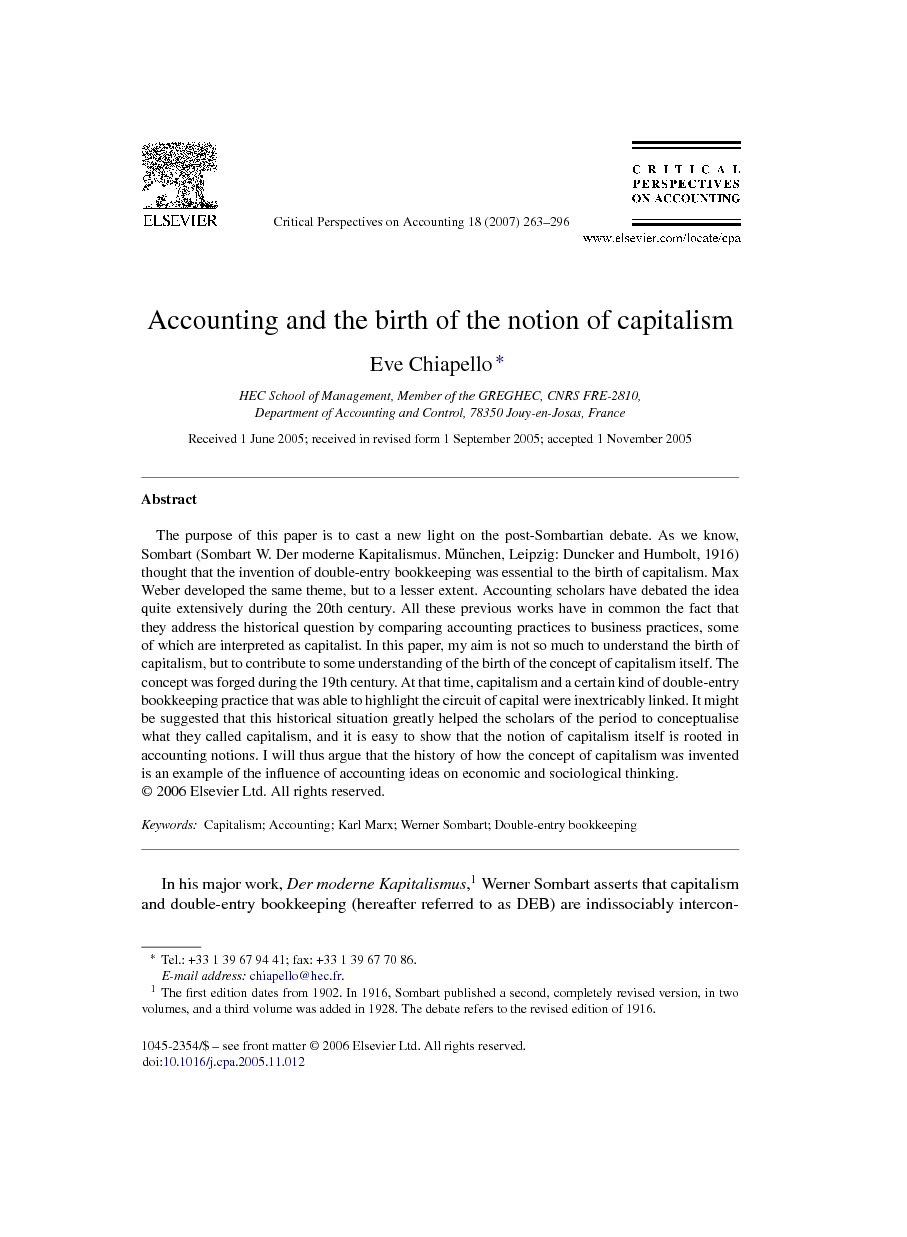 The purpose of this paper is to cast a new light on the post-Sombartian debate. As we know, Sombart (Sombart W. Der moderne Kapitalismus. München, Leipzig: Duncker and Humbolt, 1916) thought that the invention of double-entry bookkeeping was essential to the birth of capitalism. Max Weber developed the same theme, but to a lesser extent. Accounting scholars have debated the idea quite extensively during the 20th century. All these previous works have in common the fact that they address the historical question by comparing accounting practices to business practices, some of which are interpreted as capitalist. In this paper, my aim is not so much to understand the birth of capitalism, but to contribute to some understanding of the birth of the concept of capitalism itself. The concept was forged during the 19th century. At that time, capitalism and a certain kind of double-entry bookkeeping practice that was able to highlight the circuit of capital were inextricably linked. It might be suggested that this historical situation greatly helped the scholars of the period to conceptualise what they called capitalism, and it is easy to show that the notion of capitalism itself is rooted in accounting notions. I will thus argue that the history of how the concept of capitalism was invented is an example of the influence of accounting ideas on economic and sociological thinking.

In his major work, Der moderne Kapitalismus,1 Werner Sombart asserts that capitalism and double-entry bookkeeping (hereafter referred to as DEB) are indissociably interconnected, and devotes more than 10 pages to the various relationships he sees between the two phenomena. These few pages have aroused the interest of accounting historians, who despite their differences have generally concluded that Sombart's assertion was not valid for the whole period prior to the second half of the 18th century. A review of a few major texts involved in the debate shows the differences in their treatment of Sombart's writing, which aspects are examined and which ignored, pointing to opportunities for further testing of Sombart's claims. Other authors, having noted the difficulties involved in proving congenital links between DEB and capitalism, have sought new interpretations. Bryer, 2000a and Bryer, 2000b renews the analysis by focusing on what he calls “accounting signatures”. The true signature of capitalism is in Bryer's opinion not DEB alone, but the capacity to frequently calculate the “rate of return on capital”. Carruthers and Espeland (1991) set out to study the relationship between accounting practices and capitalism not as a technical connection (in the sense that accounting makes it possible to reach more rational decisions), but as a rhetorical bond and a justification (even when badly kept and useless as a decision aid, accounting contributes to the legitimacy of practices originally considered illegitimate). This article is a new attempt to understand the links between DEB and capitalism, bringing a new approach to the issue. All the previous works have in common the fact that they address the historical question by comparing accounting practices to business practices, some of which are interpreted as capitalist. This paper sets out not so much to understand the birth of capitalism, but to contribute to some understanding of the birth of the concept of capitalism itself. Rather than concentrating on the remote periods of the origins of capitalism, the focus here is on the much more recent period that saw the birth of the concept of capitalism, with an attempt to trace its genealogy. The aim is to show that this concept could not have come into being in the minds of social scientists without some knowledge of the DEB practices of their time. I will argue that the history of how the concept of capitalism was invented is an example of the influence of accounting ideas on economic and sociological thinking. The plan of this article is as follows. The first part discusses Sombart's writings and analyses the subsequent controversy. The second part then looks into the matter of not the origins but the concept of capitalism itself. The aim is to show that the concept of capitalism is indissociable from a representation of economic life shaped by an accounting outlook. The conclusion opens out the issues, identifying directions for analysis of the influence of accounting representations in the representations produced by the emerging social sciences (particularly the field of economics, still called political economy at the time). The concept of capitalism is here considered to be just one of many examples of this as yet unexplored phenomenon

This article has aimed to offer a new interpretation of the relationship between accounting and capitalism. Its purpose was not to seek links between DEB and capitalism at its origins as predecessors have, but to find them within the concept of capitalism itself. This is exactly what Weber's definition of capitalism says, in defining capitalism by the capital account (see above). For Weber, all the other circumstances required historically by capitalism follow on from the existence of the capital account as a standard for economic activity. But he never really explains the bond between this capital account and the other requirements, and so most commentators have not seen how central the accounting concept is in the Weberian definition of capitalism. It is generally reduced to one aspect among several, a correlate of rationalisation in application, rather than the actual principle of this rationalisation. Most writers instead stress the importance for Weber of “rational organisation of free labour” as a central factor of capitalism. To understand this core role of the capital account in Weber's thinking (and Sombart's), and particularly its links with other basic elements of capitalism, we have to go back to Marx. Without Marx, the links remain implicit and it is not clear how the “capital account as standard” can require a wage-earning class, for example. The capitalist system described by Marx is more or less the same as capitalism according to Sombart or Weber, at least when they produce a criterial definition. The irony of history is that Marx does not use the word “capitalism” and never or hardly mentions accounting, unlike Sombart or Weber. And yet Marx certainly knew more about the accounting practices of his time than the two German sociologists who were to follow him. Highlighting the conceptual links between accounting and the concept of capitalism, as it originated almost directly from Marx's theories, opens new horizons concerning the contribution of accounting concepts to the production of economic concepts. What of the concept of capital before Marx? Hicks (1974) is surely right that the classical economists studied by Marx had already taken their concept of capital from accounting (“it came from outside—from business practice, from accounting practice” (p. 310)), even though they had not used all the information available from a balance sheet to construct it in both abstract and circulating form, as Marx would. The same is true of the concepts of profit and income, which need further examination from this perspective. The influence of theoretical economics on accounting has been noted several times (cf. Hopwood, 1992), and is visible in all the work on what has been called “normative accounting”. But the reverse influence is still largely unexplored.45 Yet few economists have actually ignored the accounting question. It is only since the end of the major national accounting projects of the 1960s and the belated supremacy of neo-classical marginalist economics from the 1970s (almost a century after the initial foundations were laid) that pure economics has ignored the issue of accounting measurements and worked with largely irreconcilable concepts. It was precisely this breakdown in relations between the two traditions of accounting theory and economic theory, despite their constant dialogue from the origins of political economy until the work of Hicks, that a few years later enabled conceptualisations from a branch of economics as far removed as possible from accounting to invade the field of accounts in the form of positive accounting theory, holding up for ridicule its metrological approach to economic activities. Since the concepts used in pure economics are broadly based on anticipations, and are thus unmeasurable in accounting terms, accounting is reduced to being seen as a plaything at the mercy of the interests of the actors, devoid of any metrological substance, manipulated by corporate management to optimise their own remuneration or in order to avoid taxes. This is a sad outcome for the long historical relationship between economics and accounting, considering that two centuries earlier accounting was helping the economists forge concepts for understanding economic life.