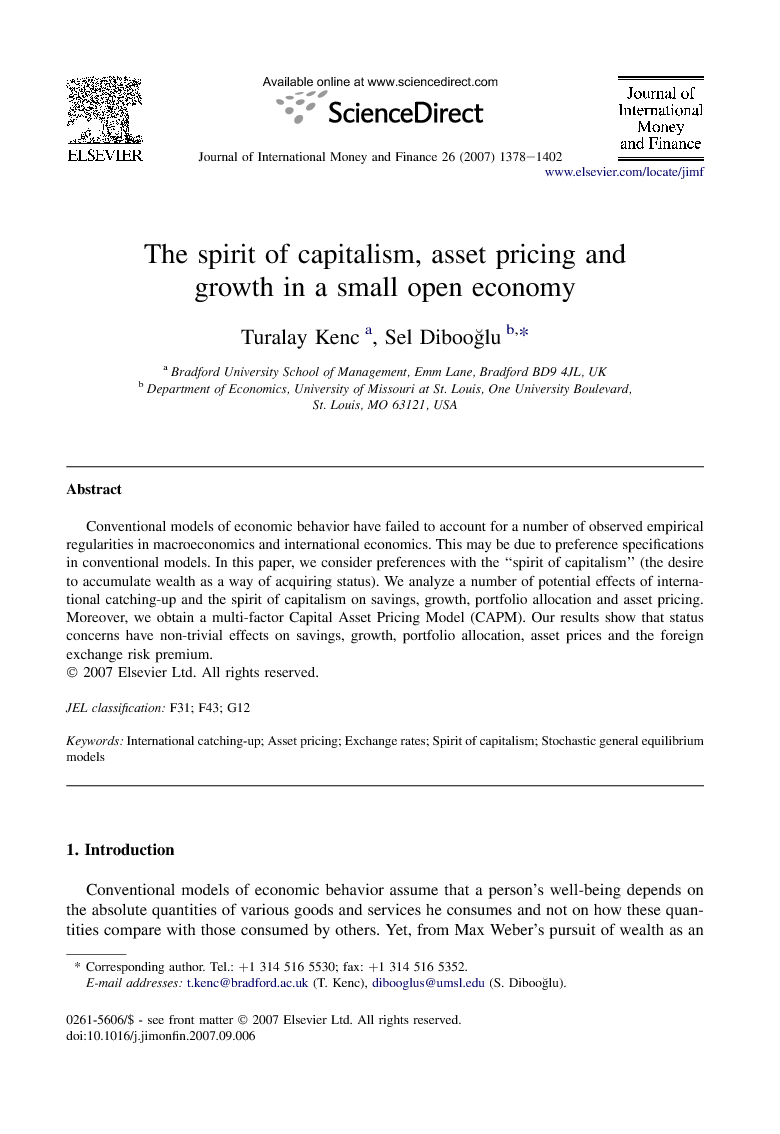 Conventional models of economic behavior have failed to account for a number of observed empirical regularities in macroeconomics and international economics. This may be due to preference specifications in conventional models. In this paper, we consider preferences with the “spirit of capitalism” (the desire to accumulate wealth as a way of acquiring status). We analyze a number of potential effects of international catching-up and the spirit of capitalism on savings, growth, portfolio allocation and asset pricing. Moreover, we obtain a multi-factor Capital Asset Pricing Model (CAPM). Our results show that status concerns have non-trivial effects on savings, growth, portfolio allocation, asset prices and the foreign exchange risk premium.

We considered preferences with the “spirit of capitalism” in a continuous-time, infinite-horizon, small open economy model with complete financial markets and a single production good. We analyzed the effects of international catching-up and the spirit of capitalism on savings, growth, portfolio allocation, and asset pricing. Our results show that incorporating the spirit of capitalism alters behavioral parameters such as the effective risk aversion and intertemporal substitution and introduces potentially important home bias, catching-up, and hedging effects into consumption, growth, and asset pricing. The “home bias” effect arises due to hedging against future fluctuations in the external wealth reference index. When assets held in the portfolio are positively correlated with the world reference wealth index, the home bias effect is positive and individuals hold more of the domestic equity. In most cases though, the additional effects cannot be ascertained qualitatively as they depend on key behavioral parameters such as risk aversion and intertemporal substitution. For example, when the intertemporal elasticity of substitution is smaller than one (ζ < 1), a faster increase in the international wealth standard (μV) induces lower consumption/higher domestic saving, and higher growth in the representative economy due to a catching-up effect. Similarly status concerns lead to non-trivial asset pricing effects. We also obtain an expression for the foreign exchange risk premium and a five-factor Capital Asset Pricing Model. The spirit of capitalism alters the market price of risk for foreign exchange and introduces additional domestic and global factors that can have potentially important effects on the foreign exchange risk premium. As for the CAPM, the representative investor needs to be compensated for bearing consumption and wealth risks, and those associated with domestic and foreign inflation and the relative reference wealth uncertainty. Even though “the capitalist spirit” matters, proper care should be taken to account for government expenditure and finance, and market imperfections such as those in credit, insurance, input and output markets. Moreover, assuming more plausible forcing processes for the exogenous variables such as mean reverting drifts and square-root diffusions as in Bakshi and Chen (1997) may yield richer asset price dynamics. These are avenues for future research.