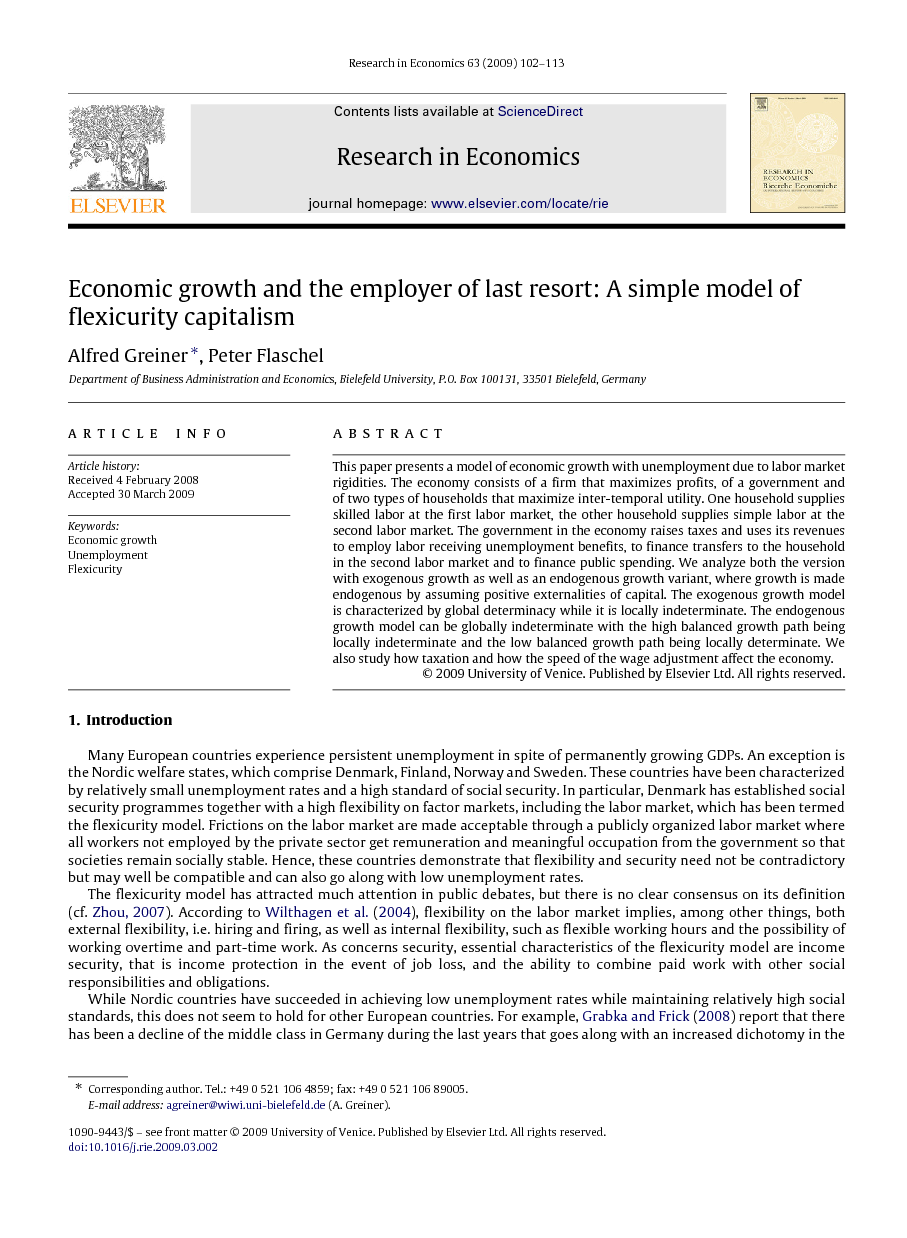 This paper presents a model of economic growth with unemployment due to labor market rigidities. The economy consists of a firm that maximizes profits, of a government and of two types of households that maximize inter-temporal utility. One household supplies skilled labor at the first labor market, the other household supplies simple labor at the second labor market. The government in the economy raises taxes and uses its revenues to employ labor receiving unemployment benefits, to finance transfers to the household in the second labor market and to finance public spending. We analyze both the version with exogenous growth as well as an endogenous growth variant, where growth is made endogenous by assuming positive externalities of capital. The exogenous growth model is characterized by global determinacy while it is locally indeterminate. The endogenous growth model can be globally indeterminate with the high balanced growth path being locally indeterminate and the low balanced growth path being locally determinate. We also study how taxation and how the speed of the wage adjustment affect the economy.

Many European countries experience persistent unemployment in spite of permanently growing GDPs. An exception is the Nordic welfare states, which comprise Denmark, Finland, Norway and Sweden. These countries have been characterized by relatively small unemployment rates and a high standard of social security. In particular, Denmark has established social security programmes together with a high flexibility on factor markets, including the labor market, which has been termed the flexicurity model. Frictions on the labor market are made acceptable through a publicly organized labor market where all workers not employed by the private sector get remuneration and meaningful occupation from the government so that societies remain socially stable. Hence, these countries demonstrate that flexibility and security need not be contradictory but may well be compatible and can also go along with low unemployment rates. The flexicurity model has attracted much attention in public debates, but there is no clear consensus on its definition (cf. Zhou, 2007). According to Wilthagen et al. (2004), flexibility on the labor market implies, among other things, both external flexibility, i.e. hiring and firing, as well as internal flexibility, such as flexible working hours and the possibility of working overtime and part-time work. As concerns security, essential characteristics of the flexicurity model are income security, that is income protection in the event of job loss, and the ability to combine paid work with other social responsibilities and obligations. While Nordic countries have succeeded in achieving low unemployment rates while maintaining relatively high social standards, this does not seem to hold for other European countries. For example, Grabka and Frick (2008) report that there has been a decline of the middle class in Germany during the last years that goes along with an increased dichotomy in the labor market leading to a rise in income inequality. On the one hand, there are well-trained or skilled employees who are less vulnerable to unemployment and, if so, soon find a new job. On the other hand, there are low-skilled employees who often become unemployed and, then, have difficulties in finding new jobs. Therefore, in this paper we intend to present a standard model of economic growth where the idea of flexicurity is incorporated and where we allow for two types of labor. Thus, we assume that the productive sector of the economy, which is modelled by a representative firm, maximizes profits taking the wage rate and the interest rate as given. The firm demands two types of labor: skilled labor on the first labor market that is supplied by household one and simple or low-skilled labor on the second labor market, supplied by household two, which receives a lower wage rate. The firm maximizes profits so that the marginal products of labor equal the wage rates, respectively, implying that there are no restrictions for the firm as concerns hiring and firing. Wages adjust according to demand on the labor markets but the labor market is not sufficiently flexible to guarantee full employment. The government acts as an employer of unemployed labor, thus providing income security for households. In addition, the government pays transfers to the household supplying simple labor and it finances general government spending. In order to finance its spending, the government levies a distortionary income tax rate. Households in the economy, finally, inelastically supply labor on the first and on the second labor market, respectively, and they both save a certain fraction of their income which is subject to income tax. Households may become unemployed but, if so, are hired by the government and produce services that raise utility of the households. It should be pointed out that households have the right to get occupation by the government but also the obligation to accept the work offered to them. The rest of the paper is organized as follows. In the next section, we present the basic structure of our growth model. Section 3 analyzes our model where we first study the model assuming that growth is exogenous. Section 4 presents and analyzes an endogenous growth model and Section 5, finally, concludes and points out possible extensions of our model.

In this paper we have presented and analyzed a standard model of economic growth with unemployment. There are no restrictions on labor markets as concerns hiring and firing but unemployment is made socially acceptable through the government employing idle labor, thus, providing the household sector with income security. Thereby, we intended to model in a simple growth framework the flexicurity capitalism of Scandinavian countries. We could demonstrate that there exists a unique steady state for the exogenous growth model which is stable. As concerns the model with endogenous growth we have shown that it is characterized by a unique balanced growth path which is saddle point stable or possibly be two balanced growth paths where one is again saddle point stable while the other is unstable. In addition we have shown that the government may essentially affect the long-run outcome in both the exogenous growth model as well as in the model with endogenous growth. To conclude we should like to point out that our model is, as far as we know, a first framework that integrates the idea of flexicurity in a formal model of economic growth. Hence, our approach is a very basic one that could be reasonably extended in several directions. One possibility could be to allow for human capital allocation by one type of household which would endogenize the difference in the types of labor. Another reasonable and realistic extension would be to assume that the government does only guarantee a certain percentage of the market income for unemployed. These topics, however, are left for future research.