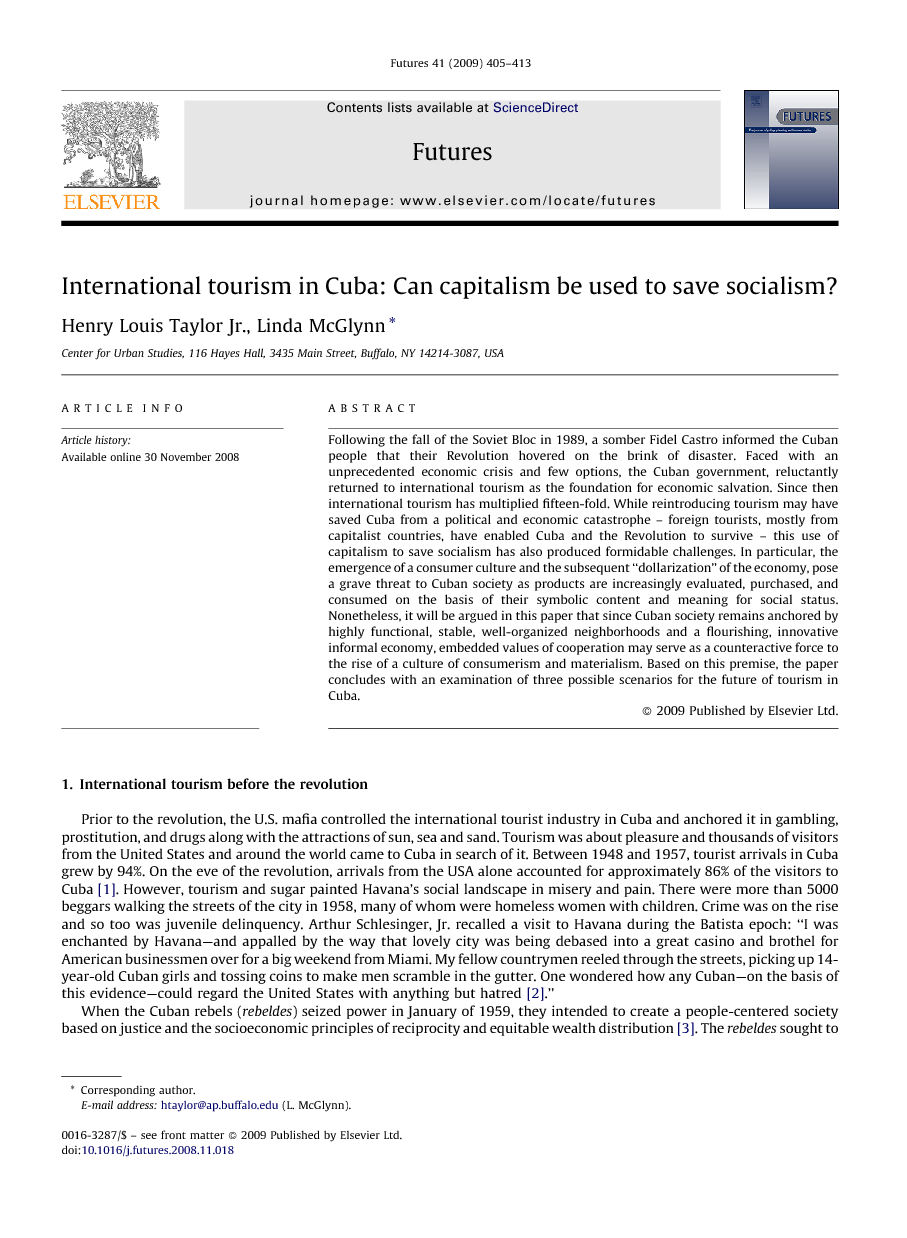 Following the fall of the Soviet Bloc in 1989, a somber Fidel Castro informed the Cuban people that their Revolution hovered on the brink of disaster. Faced with an unprecedented economic crisis and few options, the Cuban government, reluctantly returned to international tourism as the foundation for economic salvation. Since then international tourism has multiplied fifteen-fold. While reintroducing tourism may have saved Cuba from a political and economic catastrophe – foreign tourists, mostly from capitalist countries, have enabled Cuba and the Revolution to survive – this use of capitalism to save socialism has also produced formidable challenges. In particular, the emergence of a consumer culture and the subsequent “dollarization” of the economy, pose a grave threat to Cuban society as products are increasingly evaluated, purchased, and consumed on the basis of their symbolic content and meaning for social status. Nonetheless, it will be argued in this paper that since Cuban society remains anchored by highly functional, stable, well-organized neighborhoods and a flourishing, innovative informal economy, embedded values of cooperation may serve as a counteractive force to the rise of a culture of consumerism and materialism. Based on this premise, the paper concludes with an examination of three possible scenarios for the future of tourism in Cuba.

Prior to the revolution, the U.S. mafia controlled the international tourist industry in Cuba and anchored it in gambling, prostitution, and drugs along with the attractions of sun, sea and sand. Tourism was about pleasure and thousands of visitors from the United States and around the world came to Cuba in search of it. Between 1948 and 1957, tourist arrivals in Cuba grew by 94%. On the eve of the revolution, arrivals from the USA alone accounted for approximately 86% of the visitors to Cuba [1]. However, tourism and sugar painted Havana's social landscape in misery and pain. There were more than 5000 beggars walking the streets of the city in 1958, many of whom were homeless women with children. Crime was on the rise and so too was juvenile delinquency. Arthur Schlesinger, Jr. recalled a visit to Havana during the Batista epoch: “I was enchanted by Havana—and appalled by the way that lovely city was being debased into a great casino and brothel for American businessmen over for a big weekend from Miami. My fellow countrymen reeled through the streets, picking up 14-year-old Cuban girls and tossing coins to make men scramble in the gutter. One wondered how any Cuban—on the basis of this evidence—could regard the United States with anything but hatred [2].” When the Cuban rebels (rebeldes) seized power in January of 1959, they intended to create a people-centered society based on justice and the socioeconomic principles of reciprocity and equitable wealth distribution [3]. The rebeldes sought to construct a “new” society that would be built, governed, and defended by a “new” people. These people would receive food, housing, health care, and education as basic human rights of citizenship and these rights would be ensured though the actions of a state that would operate in partnership with its people, the popular classes (clases populares). In this “new” society, moral rather than material imperatives would motivate citizens, who would then willingly subordinate their personal interests to the broader interests of the collective [4]. Between 1959 and 1989, because of favorable trade agreements with the Soviet Union, the rebeldes had the resources to develop their model of a people-centered society. After 1959, international tourism all but disappeared from the island. The revolutionary government believed that tourism was largely associated with the capitalist evils of corruption, drugs, social inequality, and racism. They considered, nonetheless, leisure time to be a basic human right and made domestic tourism one of the cornerstones of social development. In November 1959, the government established the Instituto Nacíonal de la Industria Turístic (National Institute of the Tourism Industry—INTUR) to expand and develop domestic tourism in order to help Cubanos acquire knowledge of their country, provide them with opportunities to enjoy it, and to emphasize the revolutionary reality that Cuba belonged to them—the clases populares[5].

The central theme in this paper has been that international tourism imbued everyday life and culture in Cuba with capitalist consumerism and materialism. Will the ongoing growth of the tourism, leisure, and hospitality industry bolster the development of consumerism and intensify tensions in Cuban society, or will the values of consumerism and socialism co-exist? Within this context, we pose the question, “Can capitalism be used to save socialism?” Tourism, the most capitalist of all enterprises, has steadily grown since the beginning of the Special Period. This trend is likely to persist. Moreover, the most likely future development scenario will involve a thawing of relations between socialist Cuba and the United States, which will lead to the eventual influx into Cuba of thousands of tourists and entrepreneurs from the United States. This will spur the continued development of consumerism and market ideology, but will not lead to U.S. style democratization and the emergence of a market economy. Rather, the values of consumerism and socialism will co-exist as Cuba acquires the capacity to incorporate a variety of socioeconomic trends into their political system. Cuba, regardless of the developmental path taken, has little chance of becoming a wealthy nation like the United States. However, the continued growth of tourism and the overall expansion of the economy will provide the resources needed to sustain its social development strategy. Ultimately, with the contradictions properly managed and corruption and inefficiency kept to a minimum, Cuba will be able to successfully use “capitalism to save socialism.” This essay is based on the forthcoming book on neighborhood life and culture in Cuba, Henry Louis Taylor, Jr., Inside El Barrio: Race, Class and Everyday Life and Culture in Havana during the Special Period (Bloomfield, Ct.: Kumarian Press, 2009).