عنوان انگلیسی
A simple theory of ‘meso’. On the co-evolution of institutions and platform size—With an application to varieties of capitalism and ‘medium-sized’ countries
دانلود فوری مقاله + سفارش ترجمه 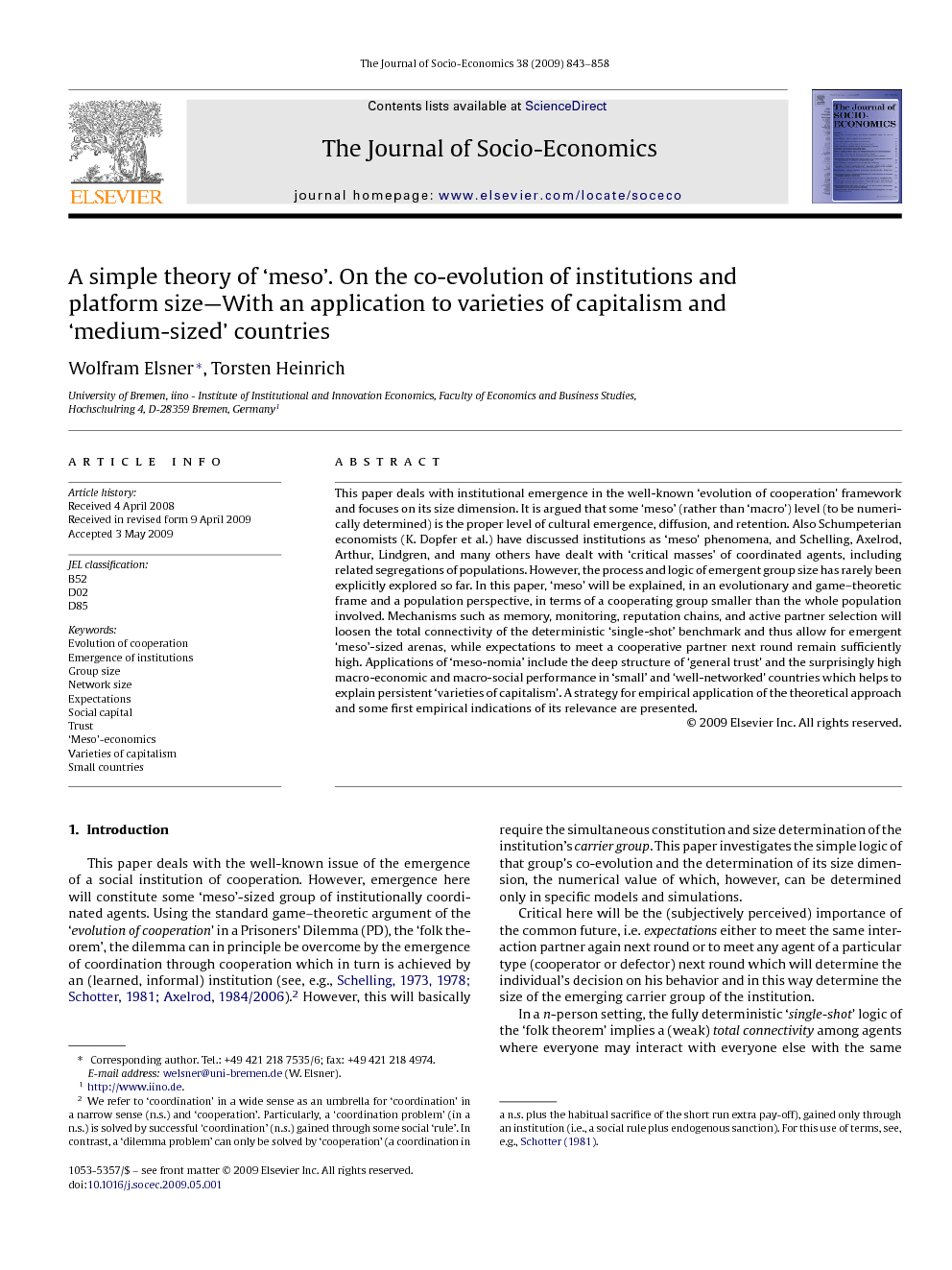 This paper deals with institutional emergence in the well-known ‘evolution of cooperation’ framework and focuses on its size dimension. It is argued that some ‘meso’ (rather than ‘macro’) level (to be numerically determined) is the proper level of cultural emergence, diffusion, and retention. Also Schumpeterian economists (K. Dopfer et al.) have discussed institutions as ‘meso’ phenomena, and Schelling, Axelrod, Arthur, Lindgren, and many others have dealt with ‘critical masses’ of coordinated agents, including related segregations of populations. However, the process and logic of emergent group size has rarely been explicitly explored so far. In this paper, ‘meso’ will be explained, in an evolutionary and game–theoretic frame and a population perspective, in terms of a cooperating group smaller than the whole population involved. Mechanisms such as memory, monitoring, reputation chains, and active partner selection will loosen the total connectivity of the deterministic ‘single-shot’ benchmark and thus allow for emergent ‘meso’-sized arenas, while expectations to meet a cooperative partner next round remain sufficiently high. Applications of ‘meso-nomia’ include the deep structure of ‘general trust’ and the surprisingly high macro-economic and macro-social performance in ‘small’ and ‘well-networked’ countries which helps to explain persistent ‘varieties of capitalism’. A strategy for empirical application of the theoretical approach and some first empirical indications of its relevance are presented.

This paper deals with the well-known issue of the emergence of a social institution of cooperation. However, emergence here will constitute some ‘meso’-sized group of institutionally coordinated agents. Using the standard game–theoretic argument of the ‘evolution of cooperation’ in a Prisoners’ Dilemma (PD), the ‘folk theorem’, the dilemma can in principle be overcome by the emergence of coordination through cooperation which in turn is achieved by an (learned, informal) institution (see, e.g., Schelling, 1973, Schelling, 1978, Schotter, 1981 and Axelrod, 1984/2006).2 However, this will basically require the simultaneous constitution and size determination of the institution's carrier group. This paper investigates the simple logic of that group's co-evolution and the determination of its size dimension, the numerical value of which, however, can be determined only in specific models and simulations. Critical here will be the (subjectively perceived) importance of the common future, i.e. expectations either to meet the same interaction partner again next round or to meet any agent of a particular type (cooperator or defector) next round which will determine the individual's decision on his behavior and in this way determine the size of the emerging carrier group of the institution. In a n-person setting, the fully deterministic ‘single-shot’ logic of the ‘folk theorem’ implies a (weak) total connectivity among agents where everyone may interact with everyone else with the same probability p in every round. While ‘strong’ total connectivity is defined here as p = 1.0, i.e. everyone definitely interacts with everyone else in every round, ‘weak’ total connectivity is given if p < 1.0. We will show that in order to explain a ‘meso’ carrier group we will have to ‘loosen’ connectivity and in this way get beyond (weak) total connectivity. Particularly, in a population perspective, the individuals need to experience the population shares of the types of strategies [be it the shares of types of agents or of types of actions (when agents may behave this or that way, depending on the constellations of critical factors which are to be discussed)]. Expectations then will have to be considered ‘contingent trust’, i.e. the expectation to meet a cooperator (or a cooperating action) next round. ‘Agency’ capabilities and mechanisms such as memory, monitoring, reputation building and using reputation chains, as well as active partner selection based on respectively gained knowledge then ‘loosen’ connectivity, i.e. dissolving (weak) total connectivity. With random encounters given every round, agents will be assumed to be able to form some ‘contingent trust’, based on some empirically gained knowledge about some agents, and, within limits, to reject the next random interaction partner. In this way, agents will be able (within limits) to generate and ‘assort’ their individual relevant groups of interaction partners, i.e. their peer groups. In this way, these mechanisms will allow for relevant group sizes to increase from ‘very small’ (as with total connectivity) into ‘meso’ sizes while keeping expectations ‘to meet’ sufficiently high. Expectation then still can be supportive to institutional emergence even in a growing group, i.e. make cooperation still appear to be the superior strategy for the individual even if group size increases. However, if these agency mechanisms for some reason loose power and efficacy or reach some limits, and cooperative payoffs will approach some maximum (for instance reputation chains may generate decreasing information gains) with growing numbers of cooperators, while defectors increasingly profit from the growing numbers of cooperators, the co-evolution of institutional emergence and group size will yield some group smaller than the whole population involved, in this way disconnecting the ‘whole population’ and the ‘maximum relevant group’, thus qualifying informal institutionalized coordination (i.e. cooperation) as a ‘meso’-economic phenomenon. However, some initial ‘minimum critical mass’ of cooperators has to come into being stochastically through some motivation to diversify behavior as we start from common defection. This may first lead to the ‘takeover’ of the whole population by cooperators but, if the relative success of common cooperation (as supported by the agency mechanisms above) should become exhausted with the growing share of cooperators as mentioned (a sigmiod curve or a curve with constantly decreasing growth of cooperation payoffs), the process will yield that ‘relevant cooperating group’ smaller than the whole population (a ‘maximum critical mass’).

Against the background of an ‘evolutionarily embedded’ simple theory of ‘meso’ as investigated in this paper, the co-evolution of ‘meso’ size, futurity (expectations), and institutional emergence, given the incentive structure, will have to be further theorized, formalized, specified and finally quantified in simulations. The critical factors explored here are: (1) the incentive structure; (2) a distribution of a population in a topology, i.e. proximity and ‘neighborhood structure’, with the corresponding rules of interaction, (e.g., mobility rules); (3) an initial (stochastic, although ‘motivated’) distribution of strategies, and a ‘minimum critical mass’ of cooperators; (4) ‘agency’ mechanisms such as monitoring, memorizing, reputation building and chain using, as well as partner selection based on related information; (5) potential additional mutual externalities of cooperation, cumulative learning, or ‘synergies’, typically justifying a degressively growing payoff curve; and, finally; (6) the ‘relevant cooperating group’, typically smaller than the whole population involved and thus ‘meso’-sized. This may be represented also by segregation patterns. The process, logic and critical factors discussed here may allow for a class of complex models and simulations focusing on ‘meso’. This may easily merge with lines of complex economic research based on increasing returns, positive feedback or cumulative causation. Technically speaking, such models will escape total connectivity among agents in patterned networks with a more loose connectivity. While the bounds of the simple logic are narrow, the space of formal modeling and quantitative simulation is virtually infinite. Complex modeling and simulation, though, has been beyond the scope of this paper. A more general ‘meso’-economics might be envisaged, i.e. the economics of the emergent ‘mid-size’ level for the coordination and capability increasing of a population in an evolutionary process. Its applications, such as cultural emergence, production and innovation standards, paradigms, and cultures, information governance and open source in a fragmented and interconnected ‘new’ economy, spatial industrial organization and agglomeration, general trust and macro performance, etc., have high practical relevance. Of course, our approach confirms that we cannot expect a non-trivial, automatic emergence of a stable, self-sustaining, Pareto-efficient institutionalized equilibrium, i.e. no ‘deliberation-free’, ‘hierarchy-free’, or ‘state-free’ stable private self-organization or ‘spontaneous order’. For instance, the initiation and generation of a ‘minimum critical mass’ may require considering the role of public policy (see, e.g., Schelling, 1978, Cooper and John, 1988 and Elster, 1989, 31ff.; Elsner, 2001 and Elsner, 2008; on the public provision of selective incentives and high futurity). This may lead to a new interactive public policy design, focused on specific ‘frame-setting’ to trigger the causal factors, which in turn may allow for institutional emergence, co-evolving with meso structure, and collective action capability among private agents.21 This may particularly give space for the emergence of the capability and inclination to learn and innovate, where otherwise too much volatility and turbulence would undermine efforts to learn and innovate. Thus, innovative behavior may, paradoxically, emerge through the stabilization of behaviors and expectations attained by institutionalized coordination (see, e.g., Boudreau et al., 2008). The co-evolutionary process of ‘meso’-economics investigated here is far from being fully understood and sufficiently elaborated. Although network formation and size has already been a dimension of many socio-economic approaches and complex models, further strengthening relevant, applied, empirical, and policy-oriented economic research, such as the topical research on ‘general trust’ and macro performance, may not least require further elaboration and simulation of the logic and process of ‘meso’