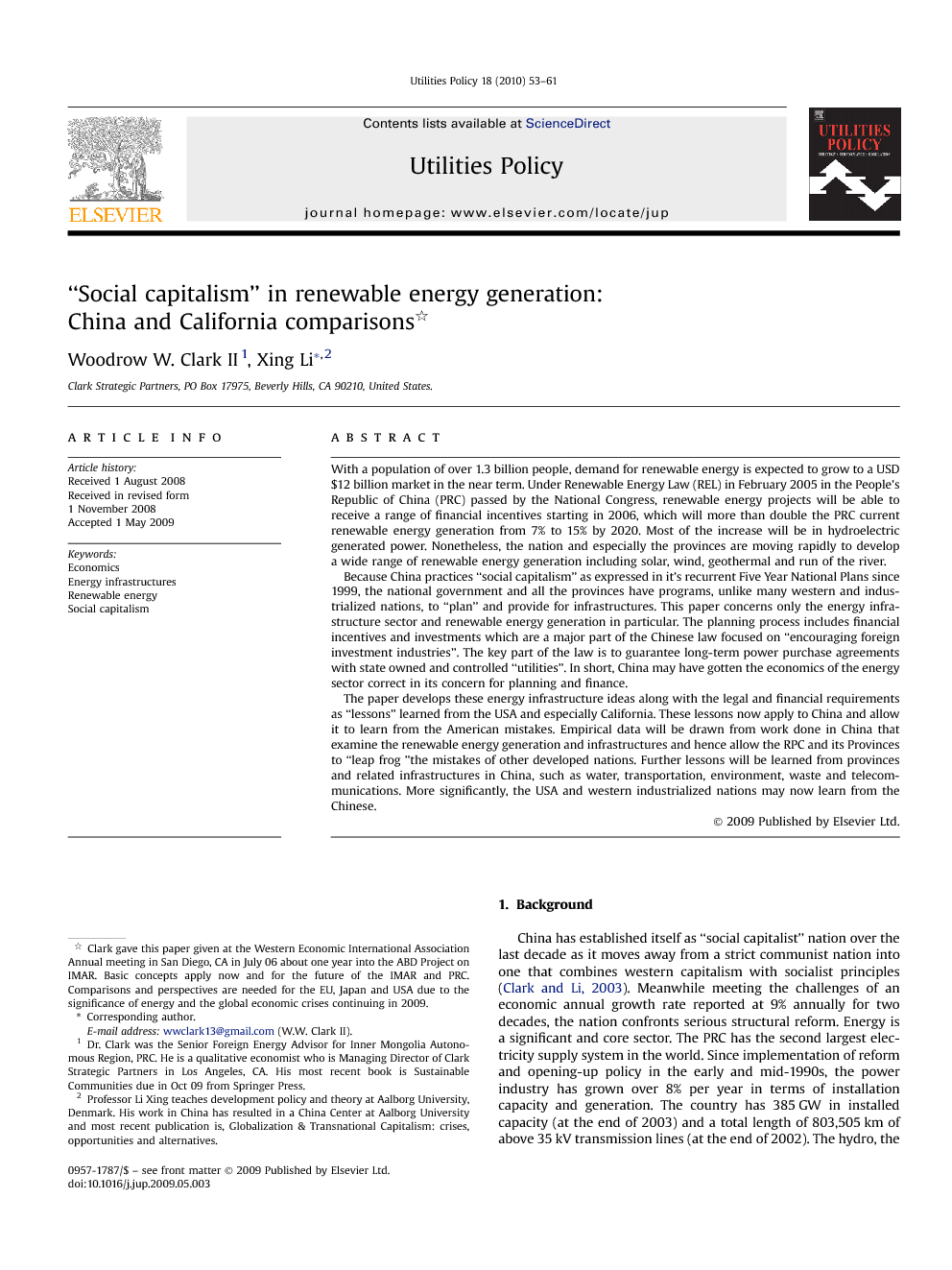 With a population of over 1.3 billion people, demand for renewable energy is expected to grow to a USD $12 billion market in the near term. Under Renewable Energy Law (REL) in February 2005 in the People's Republic of China (PRC) passed by the National Congress, renewable energy projects will be able to receive a range of financial incentives starting in 2006, which will more than double the PRC current renewable energy generation from 7% to 15% by 2020. Most of the increase will be in hydroelectric generated power. Nonetheless, the nation and especially the provinces are moving rapidly to develop a wide range of renewable energy generation including solar, wind, geothermal and run of the river. Because China practices “social capitalism” as expressed in it's recurrent Five Year National Plans since 1999, the national government and all the provinces have programs, unlike many western and industrialized nations, to “plan” and provide for infrastructures. This paper concerns only the energy infrastructure sector and renewable energy generation in particular. The planning process includes financial incentives and investments which are a major part of the Chinese law focused on “encouraging foreign investment industries”. The key part of the law is to guarantee long-term power purchase agreements with state owned and controlled “utilities”. In short, China may have gotten the economics of the energy sector correct in its concern for planning and finance. The paper develops these energy infrastructure ideas along with the legal and financial requirements as “lessons” learned from the USA and especially California. These lessons now apply to China and allow it to learn from the American mistakes. Empirical data will be drawn from work done in China that examine the renewable energy generation and infrastructures and hence allow the RPC and its Provinces to “leap frog ”the mistakes of other developed nations. Further lessons will be learned from provinces and related infrastructures in China, such as water, transportation, environment, waste and telecommunications. More significantly, the USA and western industrialized nations may now learn from the Chinese.

Under the social capitalism paradigm, China is able to develop reforms in the energy sector that impact the short and long-term development of its infrastructures. A specific focus on renewable energy in the energy sector means through the REL a sizable financial commitment over many years. This strategy re-enforces the national and local goals of the nation so that renewable energy becomes a significant element in the PRC energy infrastructure as well as providing environmental mitigation and reversing global warming and climate change. The paper discussed the need for definitions of concepts, terms and numbers as they mean different things to different people. And it identified seven themes that enable the PRC to implement renewable energy projects which meet and even exceed the national energy and environment goals and objectives. Social capitalism was discussed as the overall theme for the PRC but with specific importance to achieving the environmental and energy goals of the nation and its regions. Sustainable development is clearly one of the key areas and when defined, it must consider both specific sectors but also be agile and flexible in how energy systems can be financed and implemented. Clearly the fourth theme of infrastructures allows renewable energy (theme five) technologies and plans to be hybrids or combined in order to be financed, operated and maintained more efficiently. The last two areas of finance and knowledge capital are perhaps the “bottom line” in terms of making renewable energy a driving force in the PRC. Debt and equity funding have now become viable in the PRC as long as the government maintains oversight and even considerable ownership in the enterprises. In order for the nation to achieve and exceed its goals, it must provide long-term leadership from a government perspective for the private sector to have both confidence and stability. This “investment” from the PRC is for the long term (defined as from 10 to 50 years) in which finance and education (knowledge capital) are the most critical themes.