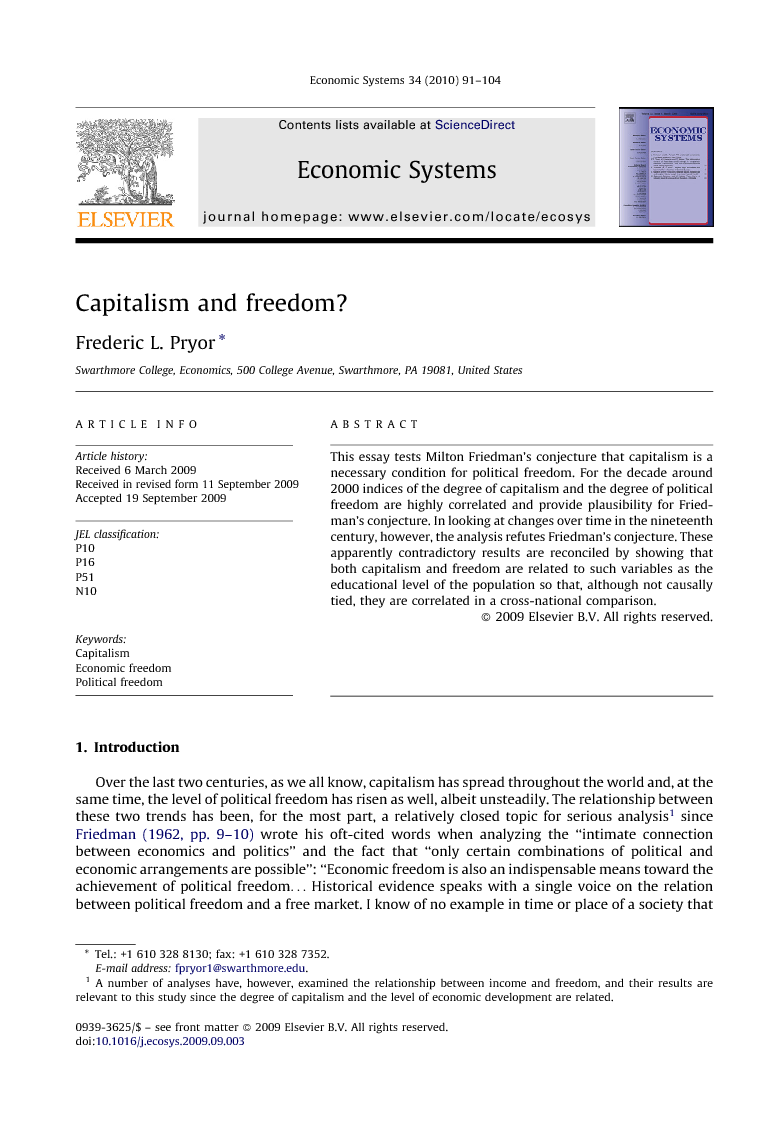 This essay tests Milton Friedman's conjecture that capitalism is a necessary condition for political freedom. For the decade around 2000 indices of the degree of capitalism and the degree of political freedom are highly correlated and provide plausibility for Friedman's conjecture. In looking at changes over time in the nineteenth century, however, the analysis refutes Friedman's conjecture. These apparently contradictory results are reconciled by showing that both capitalism and freedom are related to such variables as the educational level of the population so that, although not causally tied, they are correlated in a cross-national comparison.

Over the last two centuries, as we all know, capitalism has spread throughout the world and, at the same time, the level of political freedom has risen as well, albeit unsteadily. The relationship between these two trends has been, for the most part, a relatively closed topic for serious analysis1 since Friedman (1962, pp. 9–10) wrote his oft-cited words when analyzing the “intimate connection between economics and politics” and the fact that “only certain combinations of political and economic arrangements are possible”: “Economic freedom is also an indispensable means toward the achievement of political freedom… Historical evidence speaks with a single voice on the relation between political freedom and a free market. I know of no example in time or place of a society that has been marked by a large measure of political freedom, and that has not also used something comparable to a free market to organize the bulk of its economic activities… History suggests only that capitalism is a necessary condition for political freedom. Clearly it is not a sufficient condition.” These ideas, also argued by others (e.g., Hayak, 1944, pp. 69–70), raise a number of theoretical and empirical difficulties. Certain theoretical problems arise if we consider the possibility of joint causation, a likelihood Friedman (1991) raises in his Smith Center lecture that “while economic freedom facilitates political freedom, political freedom, once-established, has a tendency to destroy economic freedom.”2 Moreover, it is unclear about the time-period that must be taken into account to understand these ideas. Other empirical problems in examining these ideas also arise. Capitalism and freedom are correlated with a number of common variables, so that separating their joint impact is difficult. Country fixed effects also muddy the relationship. Finally, although Friedman speaks of “historical evidence,” he does not actually supply any. Difficulties arise in knowing what he means by a “large measure of political freedom” and quantifying either capitalism (which he equates with economic freedom) or political freedom in a way to allow empirical investigation. Indeed, obtaining the proper data for such an analysis is probably the most important reason why the relationship between capitalism and freedom has been neglected in the literature. Ideally we would like a large panel study of nations reaching back several centuries and offering data for both concepts, but, unfortunately, such an extensive data set does not currently exist. This essay attempts to pin down the relationship between capitalism and freedom and to extract some stylized facts to serve as a more solid foundation for analyses of the relationships between these two variables, which are so critical for our understanding of how the economic system works. It starts, therefore, with a clarification of capitalism and political freedom and shows how they can be quantified. For a cross-section comparison in recent years, I use a relatively complete measure for both concepts; for the time-series analysis using nineteenth century data, less satisfactory measures must be used for both and are described later in the essay. For the cross-country comparisons I search for exceptions to Friedman's conjecture in a straightforward manner and show that capitalism and freedom are positively and significantly related in 2000, with only few notable exceptions. Then I turn to the time-series data for the nineteenth century and find that such a relationship does not occur. This result casts grave doubt on any causal connection between capitalism and freedom and suggests that the cross-section relationship is due to country specific variables (as is the case of the relationship between income and political freedom, as shown by Acemoglu et al., 2008) and to the fact that both capitalism and political freedom are related to per capita GDP, the educational level of the population, and other factors.