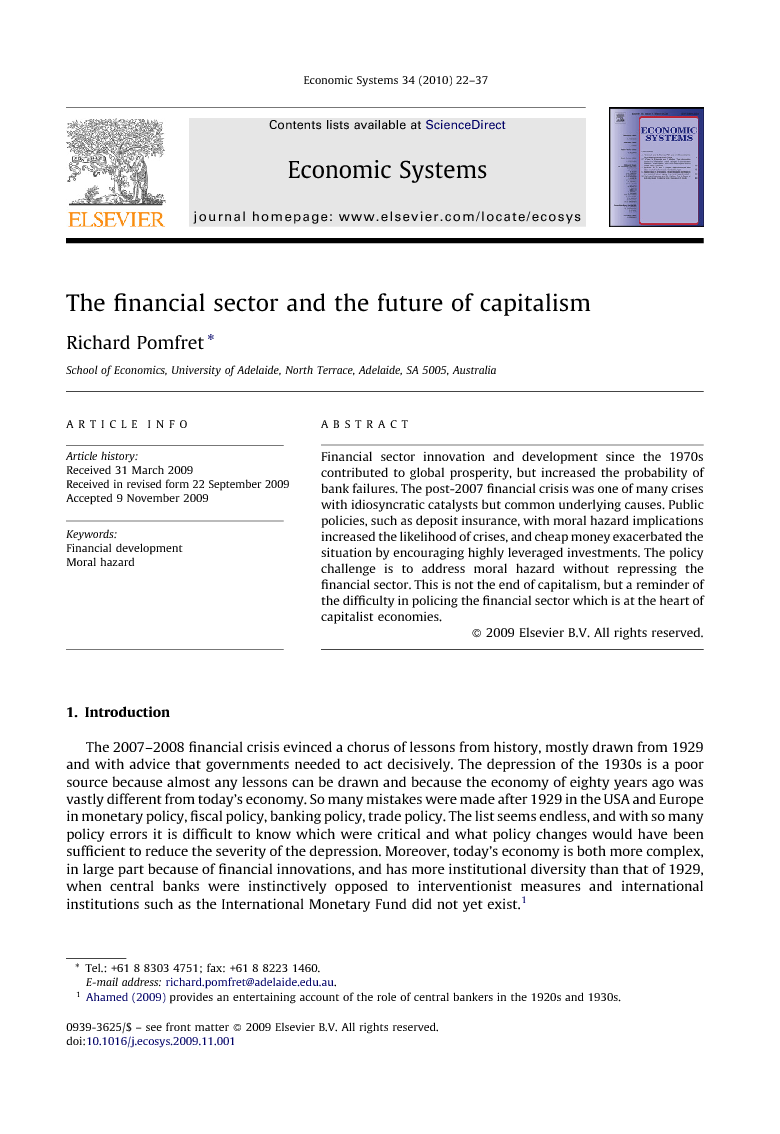 Financial sector innovation and development since the 1970s contributed to global prosperity, but increased the probability of bank failures. The post-2007 financial crisis was one of many crises with idiosyncratic catalysts but common underlying causes. Public policies, such as deposit insurance, with moral hazard implications increased the likelihood of crises, and cheap money exacerbated the situation by encouraging highly leveraged investments. The policy challenge is to address moral hazard without repressing the financial sector. This is not the end of capitalism, but a reminder of the difficulty in policing the financial sector which is at the heart of capitalist economies.

In 2008 the overwhelming view in the USA and western Europe was that governments needed to do something, but there was confusion over whether the “something” was necessary (a) to prop up financial institutions (or major non-financial corporations) whose failure would have economy-wide negative effects, (b) as a Keynesian stimulus to aggregate demand or (c) to regulate financial sectors in order to prevent further crises. The first two in particular were blurred, as many economists advocated fiscal stimuli through, say, spending on infrastructure or education (especially if they were teachers), while policymakers more often responded to demands to bail-out individual firms (especially if they were in politically sensitive locations). In the USA in 2008 the latter approach led to inconsistent polices in terms of who should lose: at AIG only common shareholders suffered, at Fannie Mae and Freddie Mac both common and preferred shareholders lost, and at Washington Mutual all shareholders and senior debt holders lost. This is unfair, and also wrong. Rethinking financial regulation may (or may not) be a justified long-term response and a Keynesian fiscal stimulus may be an appropriate short-term response, but selective bail-outs of banks and other firms in trouble reward those who took unjustified risks or keep in business firms that need to die. For all of the talk of “meltdown”—a cataclysmic but never defined term41—closure of banks is not a disaster. Lessons from events of the 1990s, such as the Asian Crisis, are relevant. Financial institutions that did not manage risk well were the ones that failed. Better-managed (or luckier) banks do not have toxic asset portfolios. In any other industry this would be seen as a violent shake-up, unpleasant for those working in the firms that close down, but with winners as well as losers in the industry, and all part of the reorganizations that make for a dynamic market economy. When Lehman Brothers shut down, other institutions bought the good assets at discounted prices, Lehman shareholders paid for their bank having assumed excessive bad debts, and shareholders in those banks which bought wisely in the firesale should reap returns. Increased interest rates on inter-bank loans reduce the intermediation taking place, but are an appropriate signal of the scarcity of credit and of doubt about the quality of loan portfolios. The real economy will contract—as happened in Mexico in 1994–1996 and in Thailand in 1997–1999—but it will emerge stronger as poor banks disappear and good banks are reminded of the need for careful risk management.42 Bank bail-outs are not just a dubious use of taxpayers’ money to support inefficient firms. Moral hazard matters. Financial institutions cannot be shown that big profits and bonuses in a boom do not have to be balanced by loss of income when they get things wrong. The business of financial intermediation is to assess loan quality and when financial institutions fail to do that correctly (and complexity is no excuse for taking on bad debts), their owners and professional staff should pay for it.43 Nationalization of loss-making banks (the Gordon Brown Plan) is a desperate measure which is likely only to soften the blow to bank owners and managers. State-owned banks have a poor record worldwide; too often they become wards of the state, requiring taxpayer support. What then is the role for the state? Deposit insurance is essential to maintain the trust of small depositors in deposit-taking institutions and to avoid old-fashioned (or not so old-fashioned in the case of Northern Rock) bank runs. Inevitably, deposit insurance introduces moral hazard, and the counterpart has to be prudential regulation to ensure that financial institutions do not take excessive risks with depositors money, secure in the knowledge that if things go sour they can walk away. In a world of complex financial instruments and fast-changing asset portfolios, detailed external oversight of the loan portfolio even by the best-trained regulators is increasingly difficult. Capital adequacy ratios are a way of ensuring that banks’ owners have something to lose, but these can be evaded and in a crisis require detailed real-time oversight to ensure that the capital is not withdrawn on the basis of insider information about an imminent collapse. If a bank goes under, the senior management should be liable and bear a cost (or, at least, not receive a reward); rules to govern permissible incentive structures for employees and caps on golden parachutes or other claims by managers who use depositors’ money poorly are more appropriate than crude salary limits. As it stands, with depositor insurance and institutions on the verge of collapse ensuring that any liquid assets are used to recompense owners and employees, creditors and the taxpayer bear most of the cost of a financial institution's failure.44 The messages of this paper are positive. The economies of the major capitalist nations are more resilient than in the past, and the post-2007 crisis will not approach that of the 1930s in its impact on the real economy. However, the psychological message may be hard for policymakers and consumers to accept: a credit-fuelled boom has to end, and cushioning the end by cheap money only sets the scene for the next crisis. Just as the prosperity with security of the 1950s and 1960s ultimately had to be corrected by admitting that fiscal policy biased towards budget deficits was not a long-term option, governments in the 2000s must accept that growth based on easy credit is not a long-term option. The moral hazard behind the crises of recent decades was facilitated by cheap money that encouraged excessive leveraging all across the economy, and with global financial markets this could result in a crisis in any part of the world. The severity of these crises can be reduced through better financial market regulation to reduce moral hazard and better macroeconomic policies to underpin a sustainable price of credit. This is part of capitalism's evolution, not the end of capitalism.