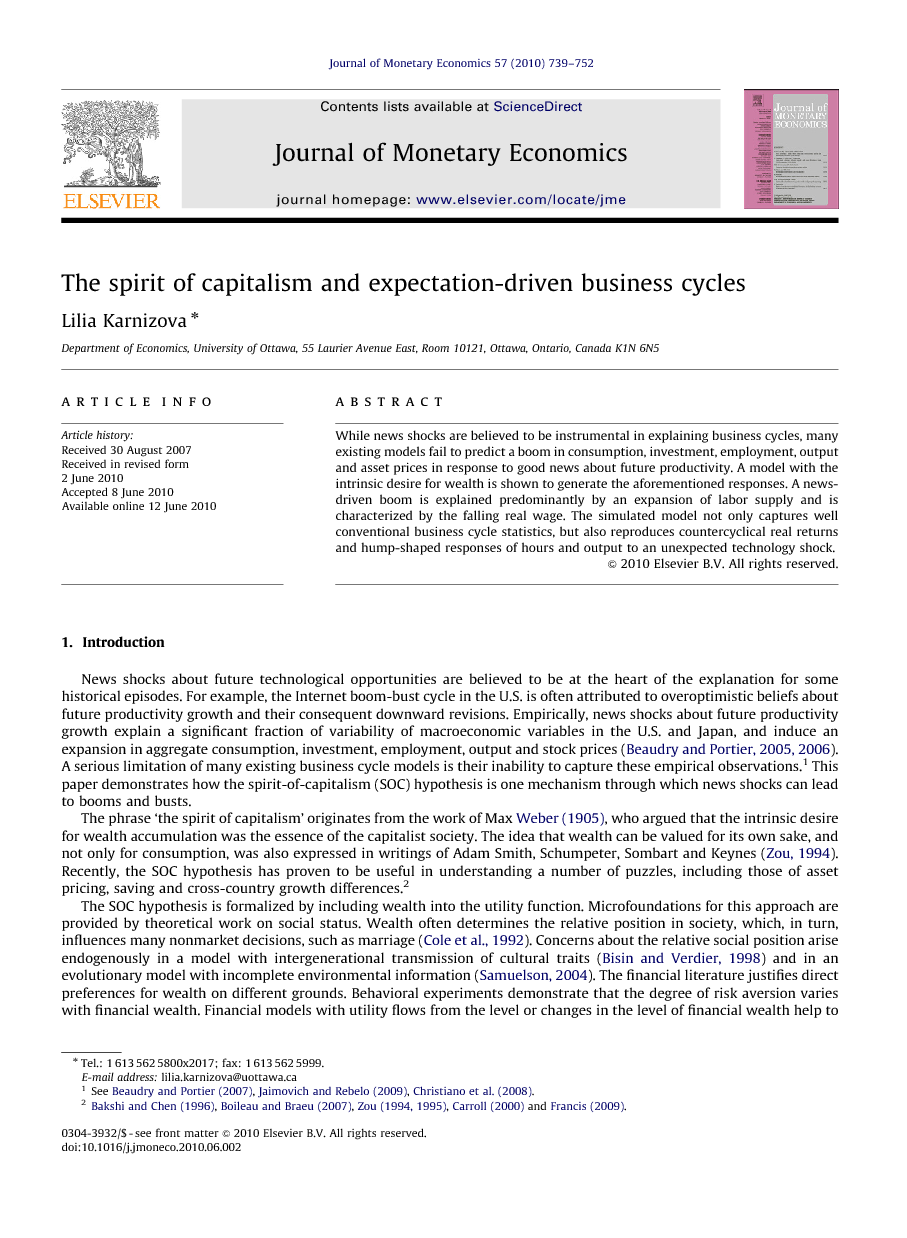 While news shocks are believed to be instrumental in explaining business cycles, many existing models fail to predict a boom in consumption, investment, employment, output and asset prices in response to good news about future productivity. A model with the intrinsic desire for wealth is shown to generate the aforementioned responses. A news-driven boom is explained predominantly by an expansion of labor supply and is characterized by the falling real wage. The simulated model not only captures well conventional business cycle statistics, but also reproduces countercyclical real returns and hump-shaped responses of hours and output to an unexpected technology shock.

News shocks about future technological opportunities are believed to be at the heart of the explanation for some historical episodes. For example, the Internet boom-bust cycle in the U.S. is often attributed to overoptimistic beliefs about future productivity growth and their consequent downward revisions. Empirically, news shocks about future productivity growth explain a significant fraction of variability of macroeconomic variables in the U.S. and Japan, and induce an expansion in aggregate consumption, investment, employment, output and stock prices (Beaudry and Portier, 2005 and Beaudry and Portier, 2006). A serious limitation of many existing business cycle models is their inability to capture these empirical observations.1 This paper demonstrates how the spirit-of-capitalism (SOC) hypothesis is one mechanism through which news shocks can lead to booms and busts. The phrase ‘the spirit of capitalism’ originates from the work of Max Weber (1905), who argued that the intrinsic desire for wealth accumulation was the essence of the capitalist society. The idea that wealth can be valued for its own sake, and not only for consumption, was also expressed in writings of Adam Smith, Schumpeter, Sombart and Keynes (Zou, 1994). Recently, the SOC hypothesis has proven to be useful in understanding a number of puzzles, including those of asset pricing, saving and cross-country growth differences.2 The SOC hypothesis is formalized by including wealth into the utility function. Microfoundations for this approach are provided by theoretical work on social status. Wealth often determines the relative position in society, which, in turn, influences many nonmarket decisions, such as marriage (Cole et al., 1992). Concerns about the relative social position arise endogenously in a model with intergenerational transmission of cultural traits (Bisin and Verdier, 1998) and in an evolutionary model with incomplete environmental information (Samuelson, 2004). The financial literature justifies direct preferences for wealth on different grounds. Behavioral experiments demonstrate that the degree of risk aversion varies with financial wealth. Financial models with utility flows from the level or changes in the level of financial wealth help to explain various stylized facts about financial markets (Barberis et al., 2001, Levy and Levy, 2004 and McQueen and Vorkink, 2004). The current paper introduces the SOC hypothesis into a neoclassical growth model with capital adjustment costs. The model can generate expectation driven business cycles (EDBC), defined as “a positive co-movement between consumption, investment and employment induced by a change in expectations holding current technology and preferences constant” (Beaudry and Portier, 2007, p. 464). Restrictions for the existence of EDBC are derived analytically. The key feature of the model is the complementarity between consumption and wealth in the preferences. Intuitively, the SOC hypothesis magnifies the incentives to save and work. The strong direct preferences for wealth make it costly to take leisure when the return on capital accumulation is high. At the same time, they raise the value of current consumption and stimulate consumer spending. Thus, households may choose to work, consume and invest more in response to an exogenous change in expectations. The SOC model is estimated to match selected moments of U.S. data. The empirical estimates support the existence of the intrinsic desire for wealth. This is a contribution to the literature on the spirit of capitalism, since many studies in this area tend to be theoretically oriented. Evaluated at the parameter estimates, the model predicts a boom in hours worked, consumption, investment, output and asset prices in response to good news about future total factor productivity (TFP). The simulated model with news shocks not only explains well conventional statistics for aggregate quantities, but also reproduces such features of the data as countercyclical real returns and hump-shaped impulse responses of hours and output to an unexpected technology shock. The SOC model is most closely related to a multi-sector model of Beaudry and Portier (2004), which also predicts a boom in consumption, investment, employment, output and the price of capital in response to good news about future productivity. The critical difference between the two models relates to their distinct theoretical mechanisms that generate EDBC. The SOC model relies on the complementarity between consumption and financial wealth in preferences. The BP model relies on the complementarity of capital with productivity and labor input in the production of consumption goods. As a result, a news-driven boom is primarily explained by responses of labor supply in the SOC model, but of labor demand in the BP model. These theoretical differences manifest themselves in the distinct predictions for real wages during in a news-induced boom. The real wage is predicted to fall in the SOC model, but to increase in the BP model. Empirical evidence on hours and wages during the U.S. boom in the 1990s may be interpreted as supporting the predictions of the SOC model. The rest of the paper is organized as follows. Section 2 describes the SOC model. Section 3 gives details about its solution and parameterization. Sections 4 analyzes the dynamic responses of the model to news and unexpected TFP shocks. Section 5 evaluates the quantitative predictions. Section 6 compares the SOC model with the model of Beaudry and Portier (2004). Section 7 offers concluding remarks.

This paper argues that direct preferences for wealth help understand the role of news shocks in the economy. A business cycle model that incorporates this feature can generate a boom in consumption, investment, employment, output and asset prices in response to news about future productivity improvement. This boom is predominantly driven by an expansion of labor supply and is characterized by the falling real wage. By contrast, models that explain EDBC through changes in labor demand, such as the model of Beaudry and Portier (2004), predict an increase in the real wage in a news-driven boom. The differences in the predicted wage responses to news shocks could be used to assess the relative importance of supply and demand effects of news shocks in the economy and to differentiate among alternative mechanisms that lead to EDBC.