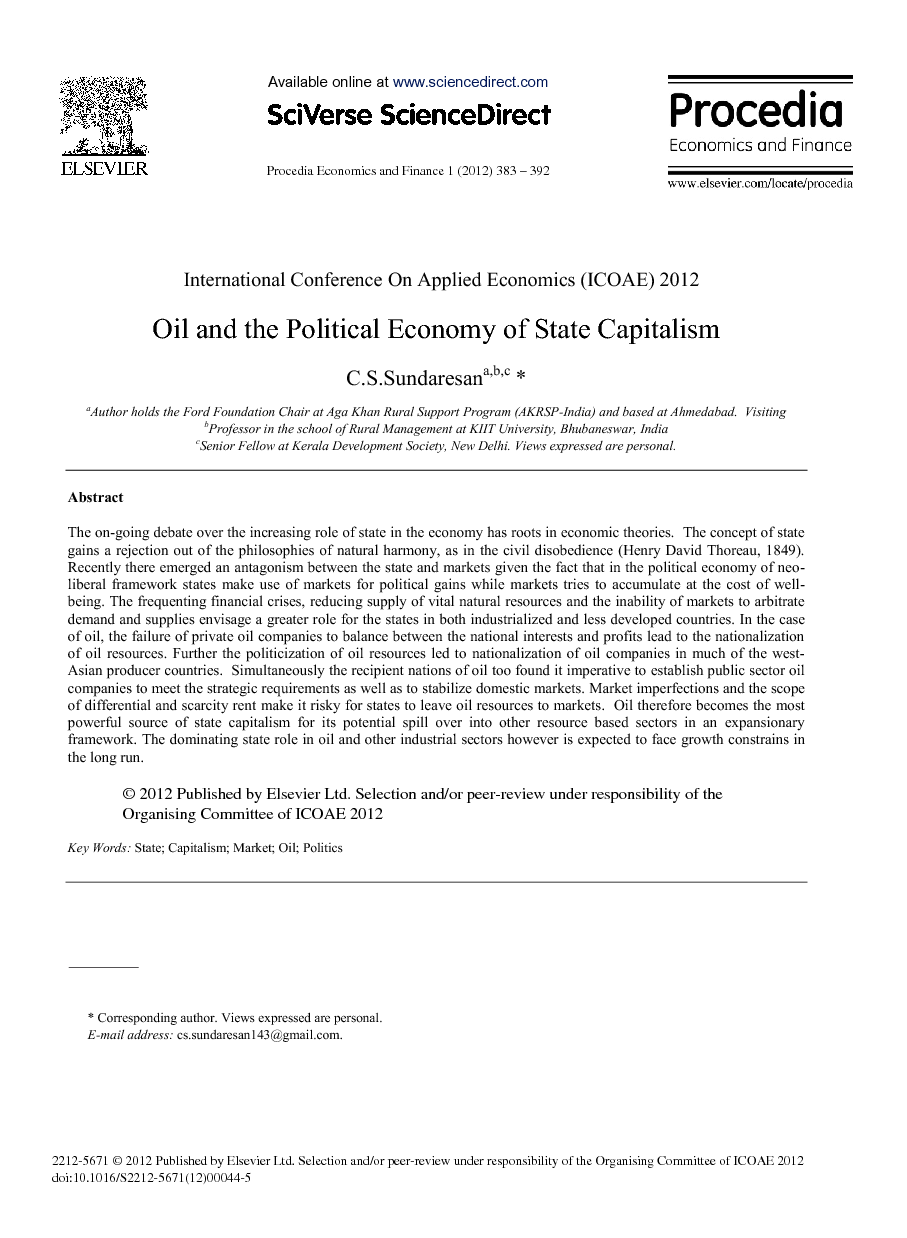 The on-going debate over the increasing role of state in the economy has roots in economic theories. The concept of state gains a rejection out of the philosophies of natural harmony, as in the civil disobedience (Henry David Thoreau, 1849). Recently there emerged an antagonism between the state and markets given the fact that in the political economy of neo-liberal framework states make use of markets for political gains while markets tries to accumulate at the cost of well-being. The frequenting financial crises, reducing supply of vital natural resources and the inability of markets to arbitrate demand and supplies envisage a greater role for the states in both industrialized and less developed countries. In the case of oil, the failure of private oil companies to balance between the national interests and profits lead to the nationalization of oil resources. Further the politicization of oil resources led to nationalization of oil companies in much of the west-Asian producer countries. Simultaneously the recipient nations of oil too found it imperative to establish public sector oil companies to meet the strategic requirements as well as to stabilize domestic markets. Market imperfections and the scope of differential and scarcity rent make it risky for states to leave oil resources to markets. Oil therefore becomes the most powerful source of state capitalism for its potential spill over into other resource based sectors in an expansionary framework. The dominating state role in oil and other industrial sectors however is expected to face growth constrains in the long run.

Inability to moderate the frequenting global financial crises, high debts and economic leadership constraints in the advanced industrial countries, political crisis in the European integration and consolidation of the Euro-Zone, the political stabilization constraints in the middle east and the northern Africa and the economic development tensions in many of the lower middle income and poor countries out of the economic liberalization together hints at the viability constraints of a market capitalist system in the future. What policies and reform agenda need to be prioritized for the settling of the global economy as well as the regional and national economies seeks answers for the capitalist mode of economic governance to answer. What should therefore be the core debate on the future of market capitalism? Will it sustain or should it be replaced with an alternative? There remain questions on the evolving nature of state capitalism for its scope and options in the decades ahead. Industrialization and sector-wise economic policies makes major indictors for the directions of the capitalism evolving in the world. With the demise of cold war and the crumbling of the socialist block, everyone took it for granted that the world is heading towards a full-fledged capitalist growth path with a heavier role for the private capitalists and markets. However, it has not been happen ing on the other hand. The states resisted easing of its powers to markets and thereby evolved strategies by which an entrepreneurial class has emerged with state patronage paving way for state capitalism- a system in which the state plays the lead role of an economic actor and uses markets for political gains. It is generally observed that this rise in State Capitalism has introduced large scale inefficiencies into the market and injected populist politics in to the economic decision making process. Ian Bremmer (2009) observed that during the cold war the decisions taken by the managers of the Soviet and Chinese command economies had little impact on western markets. But now the state officials of Abu Dhabi, Ankara, Beijing, Brasilia, Me xico, Moscow and New Delhi make economic decisions, strategic investments, regulation and state ownerships, which cut across all market places. The new champions of free market, trade and international capitalism has to prove their ideological base as well as the reasons for the failure to establish market capitalism. Historically, the private capital faced its competition from the natural alternative- the state capital. This element of state competition however, has been hidden in the race for national economic growth. For instance, the role of state capitalism was visible in Germ any way back in 1870s and in the rise of Japan in the 1950s. State Capitalism can also claim its creative role in the World’s most successful big economies. Over the past 30 years, Chinese GDP has been gaining at an average rate of 9.5 percent annually and its international trade by 18 percent in volumes (The economist Jan, 12, 2012). Further the state capital is on its forward march with state companies makes up to 80 percent of the value of stock markets in China, 62 percent in Russia, and 38 percent in Brazil. At the same time it is accounted for about one third of the emerging world’s foreign direct investments between 2003 and 2010. Having said that, will state capital emerge as the do minant player in the new world order replacing the markets? In this context, it is perhaps true that the legacy of Adam Smith continue as a double edged swordlaize fair on the one side and social welfare on the other. The role of the visible and invisible hands (State and markets respectively) have been debated and experimented during the liberal phases of global economic and social growth. The classical theory believed that the economy is self regulating and is always capable of achieving the natural level of GDP growth or output as far as prices, wages and interest rates are flexible. The special importance of labor and its increasing productivity in Marx’s scheme of reasoning led to a trend in capital accumulation. He observed that th e rising organic composition of capital apart from competition as the driving force in the market reality, the production and accumulation of surplus value finds its two fold character of capital production, exchange and use value. Exploitation of natural resources and its use patterns in a framework of rent seeking has been identified as one of the areas of concern for the state from a welfare maximization angle and hence the state enterprises have been the catalyst for the exploration and marketing of such resources. In this context it will be worthwhile to have a review of the perspectives of state and its importance in the world. This paper at an analytical level attempts an investigation into the dynamics of oil industry in expanding the state capitalist initiatives and draw inferences for its scope, scale and directions.

The role of state in the economy is historically relevant as a source of growth and stability. This is from the point of view of fostering development and justice to the people. There remains an antagonism between the state and the markets and often the states are destined to create well-functioning markets by providing legal frameworks, standards, physical infrastructure as well as an entrepreneur of last resort. Early economists were acutely aware that the national markets did not occur spontaneously, and they used modern ideas like synergies, increasing returns, and innovation theory when argued for the right kind of policies. The states are further been classified in the context of controls as renaissance state and the natural state. The starting point for renaissance economics and the modern state was out of an awareness of the sub-optimality of the present situation of mankind– steeped in the ignorance and poverty of the middle ages. All the industrialized states have passed through an obligatory passage point through a common weal. The common weal arises out of the synergies stemming from the sharing of fixed costs–resulting either from specialized tools or from specialized knowledge. The natural states perhaps miss the element of this common weal. In fact considerable tensions have been created in today’s world by the fact that any systemic efforts in the economy- and consequently to the state-are external to the core of ruling economic theory. The experience of the presently industrialized countries indicate that the need for state intervention is stronger, the poorer the country (Reinert, 1999). Given the above the oil nationalization has been viewed from the point of view of the market’s inability to balance between growth and development. From a policy perspective there are views that the state oil corporations are not likely to maintain the industry growth as well as innovations for newer reserves, which can have negative long run implications.