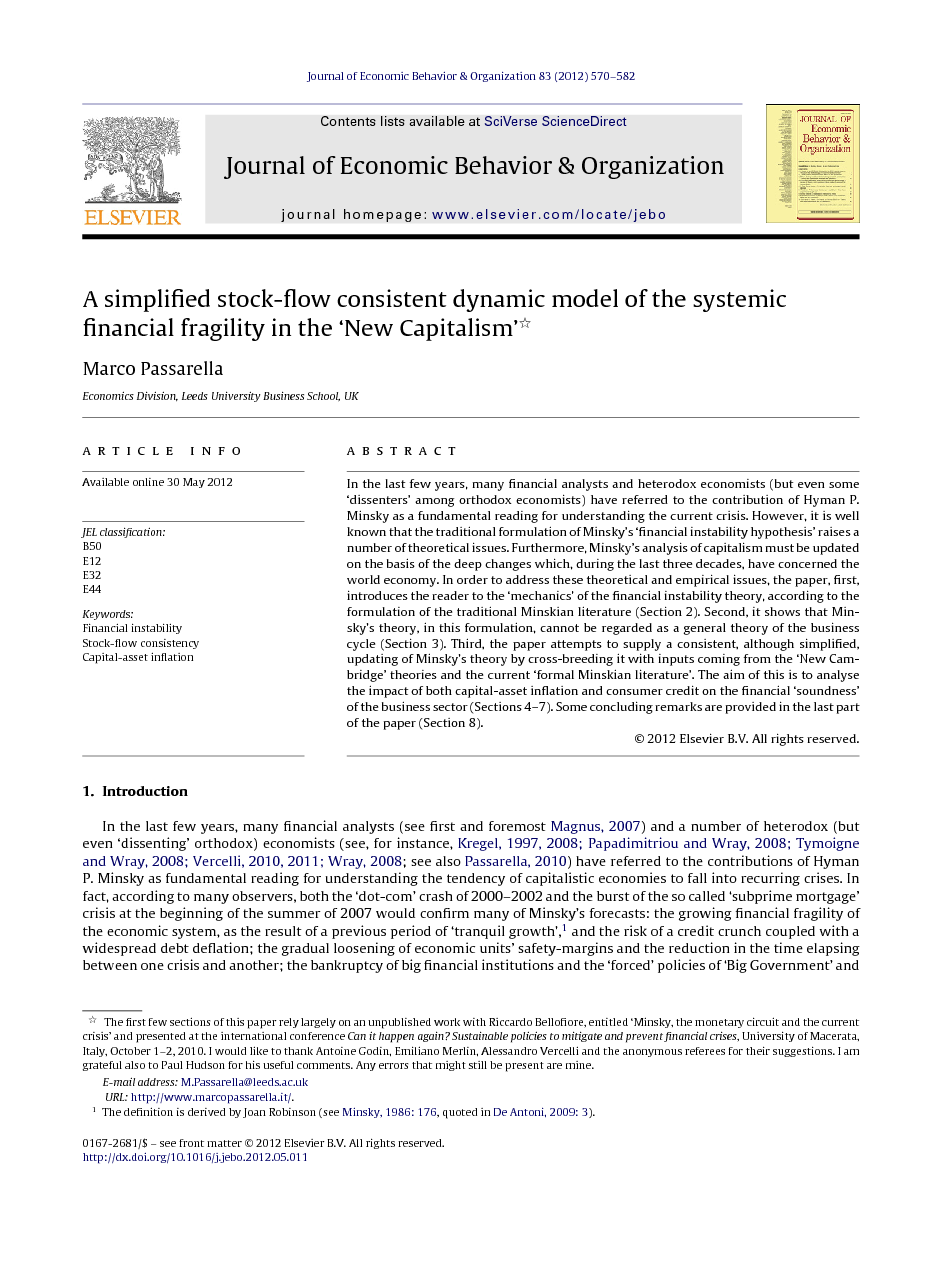 In the last few years, many financial analysts and heterodox economists (but even some ‘dissenters’ among orthodox economists) have referred to the contribution of Hyman P. Minsky as a fundamental reading for understanding the current crisis. However, it is well known that the traditional formulation of Minsky's ‘financial instability hypothesis’ raises a number of theoretical issues. Furthermore, Minsky's analysis of capitalism must be updated on the basis of the deep changes which, during the last three decades, have concerned the world economy. In order to address these theoretical and empirical issues, the paper, first, introduces the reader to the ‘mechanics’ of the financial instability theory, according to the formulation of the traditional Minskian literature (Section 2). Second, it shows that Minsky's theory, in this formulation, cannot be regarded as a general theory of the business cycle (Section 3). Third, the paper attempts to supply a consistent, although simplified, updating of Minsky's theory by cross-breeding it with inputs coming from the ‘New Cambridge’ theories and the current ‘formal Minskian literature’. The aim of this is to analyse the impact of both capital-asset inflation and consumer credit on the financial ‘soundness’ of the business sector (Sections 4–7). Some concluding remarks are provided in the last part of the paper (Section 8).

In the last few years, many financial analysts (see first and foremost Magnus, 2007) and a number of heterodox (but even ‘dissenting’ orthodox) economists (see, for instance, Kregel, 1997, Kregel, 2008, Papadimitriou and Wray, 2008, Tymoigne and Wray, 2008, Vercelli, 2010, Vercelli, 2011 and Wray, 2008; see also Passarella, 2010) have referred to the contributions of Hyman P. Minsky as fundamental reading for understanding the tendency of capitalistic economies to fall into recurring crises. In fact, according to many observers, both the ‘dot-com’ crash of 2000–2002 and the burst of the so called ‘subprime mortgage’ crisis at the beginning of the summer of 2007 would confirm many of Minsky's forecasts: the growing financial fragility of the economic system, as the result of a previous period of ‘tranquil growth’,1 and the risk of a credit crunch coupled with a widespread debt deflation; the gradual loosening of economic units’ safety-margins and the reduction in the time elapsing between one crisis and another; the bankruptcy of big financial institutions and the ‘forced’ policies of ‘Big Government’ and ‘Big Bank’ that have been implemented by governments and central banks in the hope of avoiding a deep depression – in Minsky's words, to prevent ‘it’ happening again.2 As is well known, the traditional representation of Minsky's implicit theoretical model presents some serious internal logical problems, as many authors have convincingly argued (see, first and foremost, Lavoie, 1986, Lavoie and Seccareccia, 2001, Toporowski, 2008, Bellofiore and Halevi, 2009 and Bellofiore and Halevi, 2010). The main trouble with the standard interpretation of Minsky's financial instability hypothesis concerns the idea that the leverage ratio for the business sector as a whole must eventually rise during the boom phase of the economic cycle, because of the growing debt-financed investment in fixed capital of non-financial businesses. Yet, from a macroeconomic point of view, the increase in net retained profits (in the form of bank deposits) coming from the higher investment may offset the higher debt (in form of bank loans) of the non-financial firms. This counter-intuitive outcome is known in Post-Keynesian literature as the ‘paradox of debt’ and can be considered the Kaleckian equivalent of the well-known Keynesian ‘paradox of thrift’. This paper aims to update Minsky's vision by strengthening and cross-breeding his model with inputs from the ‘New Cambridge’ theories and from the more recent ‘formal Minskian literature’. In order to do so, Section 2 introduces the reader to the mechanics of the financial instability theory, according to the ‘traditional’ formulation. Section 3 shows the limits of Minsky's hypothesis insofar as it is interpreted as a general theory of the business cycle. In Sections 4, 5 and 6 we develop a simplified dynamic stock-flow consistent model, in the wake of the current dynamic Post-Keynesian literature. This allows us to analyse the impact of both capital-asset inflation (linked to the ‘over-capitalization’ of firms) and consumer credit on the financial soundness of the non-financial business sector. Section 7 provides some empirical evidence about the sectoral debt ratios, the trend in the share of equity-financed investment and their impact on the financial soundness of business sector. This seems to confirm that households’ ‘autonomous’ consumption and capital-asset inflation may have ‘stabilizing’, although temporary, effects on the non-financial business sector's balance-sheet. Concluding remarks are provided in the last section.

In the previous sections we have developed a stylized SFC dynamic model aiming to analyse the effects produced on the balance-sheets of the business sector by the deep changes that occurred in the economic-financial structure of western capitalist economies during the few last decades. This has allowed us to explain why, although Minsky's financial instability hypothesis eventually came true at the beginning of the summer 2007, it has occurred with a different set of modalities and through a different concatenation of factors compared to the original Minskian formulation. The point is that in the early post-2003 upswing, as well as during the boom of the 1990s, the counter-tendencies to an increase in the leverage ratio for the non-financial business sector have been stronger than the tendency to an increase in that ratio. Among these counter-tendencies, emphasis has been placed on both the role played by autonomous consumption in sustaining firms’ gross profits and the role played by the inflation in the prices of capital assets as a stabilizing factor for the business sector balance-sheets. As recent events have shown, these were just temporary factors that were (so to speak) destined, since the beginning, to lead the US in particular and much of the world economy generally into a ‘Minsky meltdown’ and hence into a deep recession.