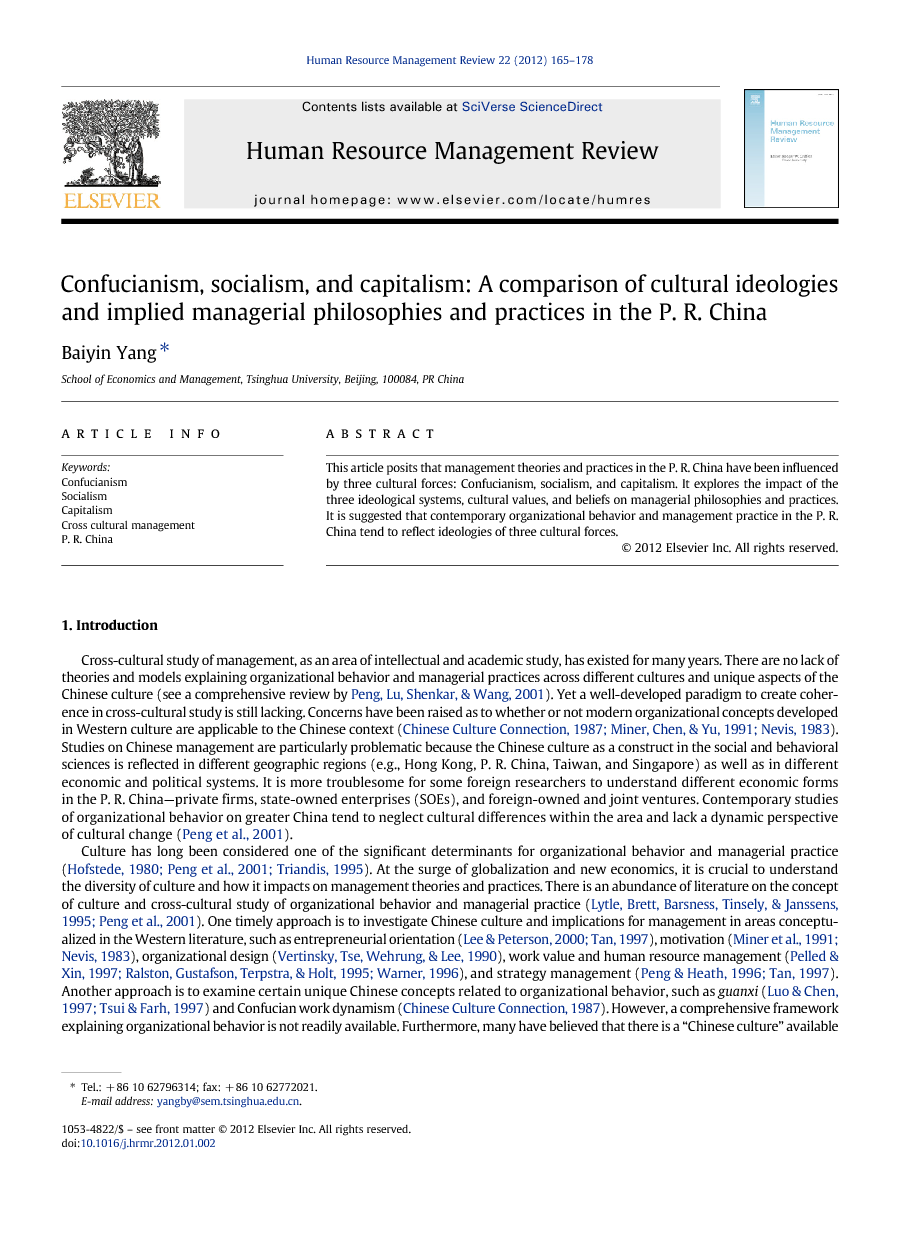 This article posits that management theories and practices in the P. R. China have been influenced by three cultural forces: Confucianism, socialism, and capitalism. It explores the impact of the three ideological systems, cultural values, and beliefs on managerial philosophies and practices. It is suggested that contemporary organizational behavior and management practice in the P. R. China tend to reflect ideologies of three cultural forces.

Cross-cultural study of management, as an area of intellectual and academic study, has existed for many years. There are no lack of theories and models explaining organizational behavior and managerial practices across different cultures and unique aspects of the Chinese culture (see a comprehensive review by Peng, Lu, Shenkar, & Wang, 2001). Yet a well-developed paradigm to create coherence in cross-cultural study is still lacking. Concerns have been raised as to whether or not modern organizational concepts developed in Western culture are applicable to the Chinese context (Chinese Culture Connection, 1987, Miner et al., 1991 and Nevis, 1983). Studies on Chinese management are particularly problematic because the Chinese culture as a construct in the social and behavioral sciences is reflected in different geographic regions (e.g., Hong Kong, P. R. China, Taiwan, and Singapore) as well as in different economic and political systems. It is more troublesome for some foreign researchers to understand different economic forms in the P. R. China—private firms, state-owned enterprises (SOEs), and foreign-owned and joint ventures. Contemporary studies of organizational behavior on greater China tend to neglect cultural differences within the area and lack a dynamic perspective of cultural change (Peng et al., 2001). Culture has long been considered one of the significant determinants for organizational behavior and managerial practice (Hofstede, 1980, Peng et al., 2001 and Triandis, 1995). At the surge of globalization and new economics, it is crucial to understand the diversity of culture and how it impacts on management theories and practices. There is an abundance of literature on the concept of culture and cross-cultural study of organizational behavior and managerial practice (Lytle et al., 1995 and Peng et al., 2001). One timely approach is to investigate Chinese culture and implications for management in areas conceptualized in the Western literature, such as entrepreneurial orientation (Lee and Peterson, 2000 and Tan, 1997), motivation (Miner et al., 1991 and Nevis, 1983), organizational design (Vertinsky, Tse, Wehrung, & Lee, 1990), work value and human resource management (Pelled and Xin, 1997, Ralston et al., 1995 and Warner, 1996), and strategy management (Peng and Heath, 1996 and Tan, 1997). Another approach is to examine certain unique Chinese concepts related to organizational behavior, such as guanxi ( Luo and Chen, 1997 and Tsui and Farh, 1997) and Confucian work dynamism (Chinese Culture Connection, 1987). However, a comprehensive framework explaining organizational behavior is not readily available. Furthermore, many have believed that there is a “Chinese culture” available for us to conduct research on and understand. However, P. R. China is so vast and complicated that no single version of cultural description can grasp its complexity. For instance, the prevailing wisdom hypothesizes that financial incentives will have less impact on Chinese employee motivation and productivity than on their American counterparts ( Earley and Singh, 1995 and Pelled and Xin, 1997). This hypothesis is based on the belief that a masculine cultures tend to have greater demands for remuneration. Contrary to the above hypothesis, empirical evidence shows that the Chinese prefer differential reward rules, and are more economically oriented than are the more humanistically oriented Americans (Chen, 1995). Due to the dramatic reforms and changes that have occurred in China, Chinese culture is changing, and it has multiple facets. In other words, we need to study several dominant cultural forces and explore how these forces have influenced managerial philosophy and practice in today's mainland China. In this paper, I will first identify key cultural dimensions that influence philosophy and practice of management and organization in contemporary Chinese society. Second, I will use P. R. China as an example to illustrate the influences of cultural ideologies on management practice and organizational behavior. It is posited that culture is a dynamic and fluid concept and that all cultures are changing at different speeds in different directions. I will identify ideological differences, cultural values, and beliefs among three dominant cultures—traditional (Confucianism), socialism, and capitalism. Third, I suggest that contemporary organizational behavior and managerial practice can be understood through dynamic relationships among three cultural forces. I will base my argument on observations and secondary analyses in a “hybrid form” (Earley & Singh, 1995).

In comparing three influential cultures in the P. R. China, this paper does not intend to evaluate which of them is the best or most suitable for social and economic development in China. As ideologies, all three cultures have both merits and flaws. The questions regarding the best social and economic institutions and the best organizational approach are largely determined by cultural values and beliefs. It is posited here that contemporary organizational behavior and managerial practices in China can be better understood through examining conflict and convergence of three cultures. Consequently, three corresponding forces need to be taken into consideration in examining current organizational transformation. Suppose a researcher has conducted a survey to compare work values between Chinese and Americans, and found that Chinese scored much higher on individualism, does that mean that Chinese employees no longer carry their traditional values? Not at all (see for example, Ralston et al., 1995). In fact, one is likely to discover strong capitalist influences in many East Coast areas such as Shanghai and Shenzhen. According to the above analyses, Chinese culture needs to be understood as conflict and convergence among three competing cultural systems. Many young employees tend to be quite individualistic, partially due to the influence of the Western culture, and partially reflecting a backlash against the socialist egalitarian ideology. While this paper does not offer any specific future direction of organizational transformation in China, it provides a framework for studying the major influences on organizational behavior and managerial practice. The main theme of this paper is that the organizational transformations in private, state-owned, and foreign-owned enterprises need to be studied through the confluences of Confucianism, socialism, and capitalism. The intent of this paper is neither to predict the future development in the P. R. China, nor to argue a preferable direction for Chinese society and management in organizations. Nevertheless, the theme of this paper suggests that three cultural forces will co-exist for a long time, and that the future will be determined to some degree by the convergence of these cultural forces. The conceptual framework presented in this paper also provides a useful tool for building organizational theories and analyzing managerial concepts that are unique to China. For example, guanxi as a Chinese indigenous concept can be examined in relation to cultural values and beliefs. It is commonly recognized that developing renqing (i.e., social or humanized obligation) is a precondition for the establishment and use of guanxi. It is believed that guanxi is useful because people involved in certain social networks will exchange humanized obligations. Therefore, such belief is rooted in several fundamental values and beliefs including the belief in human nature [i.e., goodness] and moral standards [i.e., based on feeling]. However, some people may not prefer guanxi or are less likely to fulfill renqing. Therefore, it is necessary to investigate the relationship between the guanxi practices and embedded cultural values and beliefs. This paper has identified several important cultural dimensions and analyzed differences among three cultures in terms of values, beliefs, and managerial philosophies and practices. As Tayeb (2001) has rightly pointed out, there is danger of losing sight of the big picture in any attempt to simplify and reduce complex cultural phenomena into neat categories. Culture should be viewed as a dynamic rather than static concept. More importantly, it is crucial to examine interactions among three cultural systems: values, beliefs, and social norms. For instance, some capitalist values and beliefs might be adapted into the Chinese context along with the institutionalization of the free market system. While scholars of cross-cultural study have long been interested in understanding the cultural influences on management theory and practice, the perpetuation function of the practice and organizational behavior (as part of social norms) as suggested by Table 1 should not be overlooked. A systematic examination of the dynamic relationships among three cultural components is beyond the scope of the current paper. It should be emphasized that culture as a collective learning outcome among a group of individuals, is a totality of three sub-systems: shared values, beliefs, and social norms. Furthermore, those who are interested in cross-cultural studies should adopt both historical and contemporary perspectives in examining the dynamic changes of ideologies and social norms