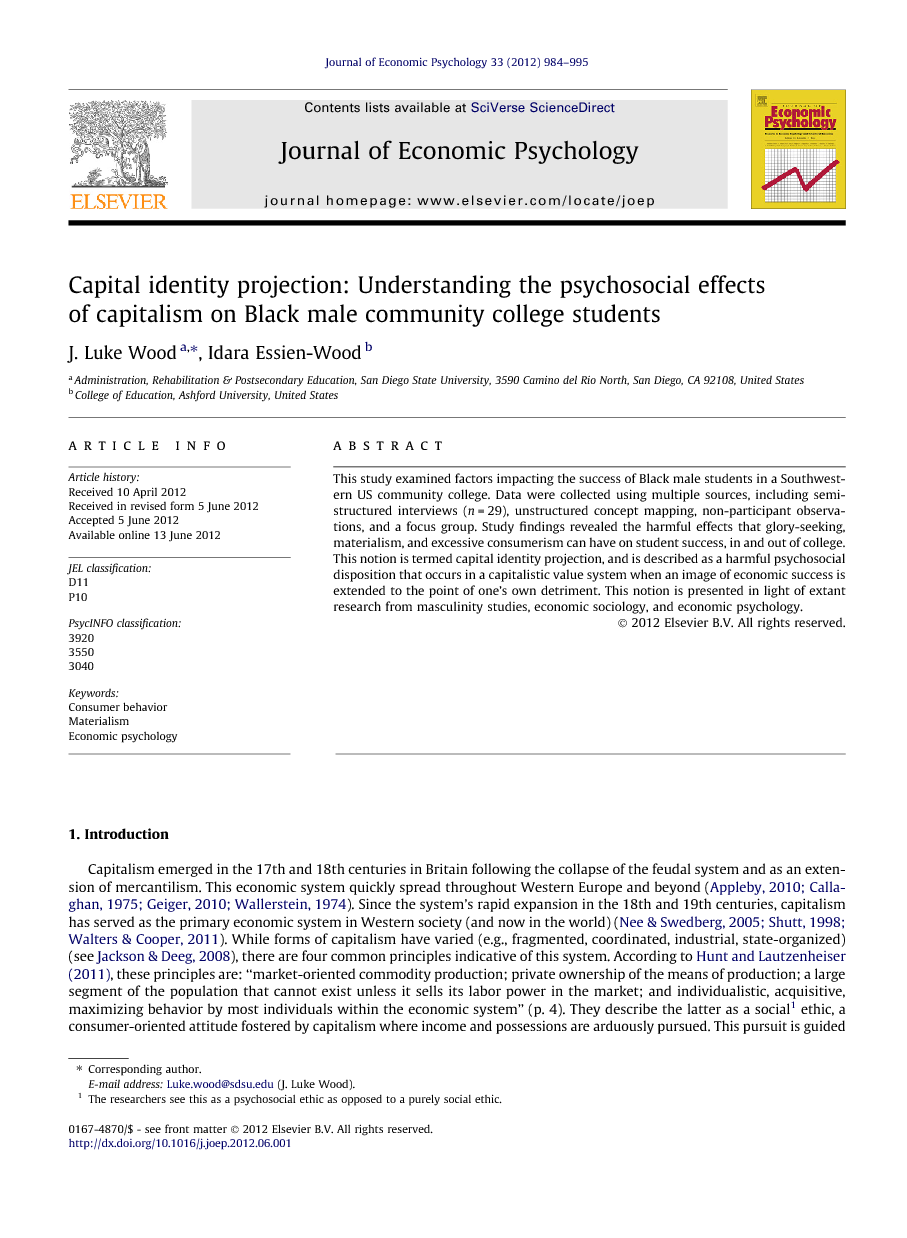 This study examined factors impacting the success of Black male students in a Southwestern US community college. Data were collected using multiple sources, including semi-structured interviews (n = 29), unstructured concept mapping, non-participant observations, and a focus group. Study findings revealed the harmful effects that glory-seeking, materialism, and excessive consumerism can have on student success, in and out of college. This notion is termed capital identity projection, and is described as a harmful psychosocial disposition that occurs in a capitalistic value system when an image of economic success is extended to the point of one’s own detriment. This notion is presented in light of extant research from masculinity studies, economic sociology, and economic psychology.

Capitalism emerged in the 17th and 18th centuries in Britain following the collapse of the feudal system and as an extension of mercantilism. This economic system quickly spread throughout Western Europe and beyond (Appleby, 2010, Callaghan, 1975, Geiger, 2010 and Wallerstein, 1974). Since the system’s rapid expansion in the 18th and 19th centuries, capitalism has served as the primary economic system in Western society (and now in the world) (Nee and Swedberg, 2005, Shutt, 1998 and Walters and Cooper, 2011). While forms of capitalism have varied (e.g., fragmented, coordinated, industrial, state-organized) (see Jackson & Deeg, 2008), there are four common principles indicative of this system. According to Hunt and Lautzenheiser (2011), these principles are: “market-oriented commodity production; private ownership of the means of production; a large segment of the population that cannot exist unless it sells its labor power in the market; and individualistic, acquisitive, maximizing behavior by most individuals within the economic system” (p. 4). They describe the latter as a social1 ethic, a consumer-oriented attitude fostered by capitalism where income and possessions are arduously pursued. This pursuit is guided by the notion that subjective needs and discontent can be removed by the acquisition of goods. Moreover, given that capital attainment is a marker of personal value, competition is fostered to hold grander assets. This notion of individualism and procurement is the focus of this manuscript, where we discuss how the values of a capitalist system can foster malfunctioning dispositions and behaviors that negatively affect individuals.2 We term this notion, capital identity projection, describing this concept as a psychosocial malady which occurs when projection of socio-economic achievement is pursued in lieu of personal well-being. To clarify, the term ‘projection’ is used to refer to the portrayal or public display of a capital image, not as a psychological projection whereby one’s own feelings or actions are attributed to others. This concept is contextualized around data derived from a study of Black male students attending a community college in the Southwestern United States. The larger study from which this data were drawn focused on factors affecting the academic success of these students. From this research, capital identity projection emerged as a recurrent concept with numerous intricacies. To address this concept and the intricacies associated with it, the researchers: (1) discuss relevant literature which contextualizes the challenges facing Black males in the community college; (2) provide an overview of the qualitative methodology employed in this study; and (3) describe capital identity projection with related premises in light of study findings and extant literature from masculinity studies, economic sociology, and economic psychology. Capital identity projection is an integral addition to the literature on Black social-psychology and economic psychology, as few psychological studies have examined how economic systems affect the lives of those who live within those systems. Even fewer examine the psychological effect of capitalism on people (Kasser, Cohn, Kanner, & Ryan, 2007). This is a particularly important notion given the large percentage of the world’s population which resides under the influence of capitalism. In particular, this study presents a psychosocial perspective on the effects of capitalism on Black males, a sub-population which has historically fueled the capitalistic economic engine as “slaves, sharecroppers, tenant-farmers, maids, Pullman porters, factory workers and others at the base of bourgeois society” (Ferguson, 2011, p. 69). A unique component of this research is the investigation of the psychological effects of capitalism on students enrolled in a community college. The community college is a particularly appropriate institutional context for an analysis of the influence of capitalism on Black males, as these institutions have traditionally served as an avenue for postsecondary opportunity for societies most underserved (Nevarez & Wood, 2010) and are a representative microcosm of American society (Cloud, 2010, Dicroce, 1995 and Grimes, 1999). Unfortunately, Black male disparate outcomes in wider society are evident within community colleges. After 3 years, more than half (55%) of Black male attendees will have left without obtaining a degree (Wood, 2011a). These data serve as a clarion call to better understand factors that affect the success of this group in college, of which capital identity projection provides added insight. To situate the presentation of this concept, we first discuss extant literature on Black males in the community college.

Capital identity projection is a malfunctioning psychosocial disposition which we believe is a response a capitalistic value system. However, this psychosocial disposition and resultant negative effects are not new. Rather, numerous studies have illustrated the glory-seeking, materialistic, excessive consumerism mentality fostered in a capitalistic system (Boudreau et al., 2001, Malka and Chatman, 2003 and O’Reilly and Caldwell, 1980). Further, a large body of literature also discusses the fixation on acquiring goods and projecting an image of success and status among many populations (Harper, 2004, Harris et al., 2011 and Majors and Billson, 1992). However, this study benefits these literature bases by explicitly identifying, describing, and discussing the premises of capital identity projection. While not necessarily a syndrome in the clinical sense, articulating terminology and premises regarding this disposition has the same effect. This articulation is beneficial as it provides a framework for the establishment of an advanced nomenclature for investigating the nuances of its causation, negative effects, and possible interventions (Leiblum & Nathan, 2001). Further, making an explicit connection between projection and capitalism is essential as it provides space to debunk deficit notions which would lay the blame for this disposition and its effects on individuals, their families, or their communities. In contrast, this research places culpability for this disposition as a byproduct of a capitalistic value system which fosters desires for excess, individualism, and glory-seeking. These vices are necessary to ensure that goods and commodities are consumed, thereby fueling ‘the economic engine’. Furthermore, as a byproduct of a capitalistic value system, capital identity projection and its effects are not relegated to Black males in community colleges. This psychosocial disposition affects some individuals from all groups, with differing nuances dependent upon the capitalistic marketing enterprises use of one’s identity (e.g., gender, racial, cultural) to encourage consumption. This assumption is a limitation of this study, given that data employed in this study are specific only to Black males in the community college context, thus, future studies are needed to examine evidence of capital identity projection (and its effects) on other sub-populations. Some student comments seemed to illustrate a divergence from Maslow’s (1943) hierarchy of needs, where esteem-needs such as respect, reputation, attention, and prestige are, at times, prioritized above physiological-needs and safety-needs. Some examples of this were acquiring goods in lieu of having money for rent or to pay the lights. Certainly, this study has shown that esteem-needs are sought out to the detriment of the individual. Thus, further work is needed to understand the factors that propel projectors toward seemingly irrational behavior. In addition, future studies should examine whether the proportion of individuals exhibiting this malady is cyclical and if projection behavior is tied to economic conditions. We have suggested that capital identity projection occurs when this disposition negatively affects the projector. Like other maladies (e.g., depression, anxiety) this disposition likely ranges on a continuum with some individuals actualizing more negative outcomes than others. Future studies should examine this continuum, providing a nomenclature for which to understand varying levels of projection. As previously noted, this study was conducted on a population of Black male students as part of a larger study on academic success. The premises and examples of capital identity projection presented in this manuscript illustrate that this disposition can have negative effects on individuals inside of college and in wider society. With regard to the former, we have shown that projectors engage in poor financial management, have distractions from academic matters, experience identity ambiguity, and exhibit low degree utility. All of these effects can have a detrimental impact to students’ success in college. Using the framework of capital identity projection, more research is needed to understand how this concept negatively affects Black males (and other students) in college and in society at large. Research in this regard will serve to create an enhanced understanding of this disposition which is needed to employ interventions which curb its negative effects. We hypothesize that a primary component of any effort to address this psychosocial malady will be enhanced consciousness and education regarding the structures, processes, marketing, and value inculcation of a capitalistic system. Moreover, projectors need exposure to the intricate ways in which social and cultural notions of success effect individuals psychologically, and how these psychological outcomes serve to negatively impact the lives individuals who are projectors of values derived from this economic system.