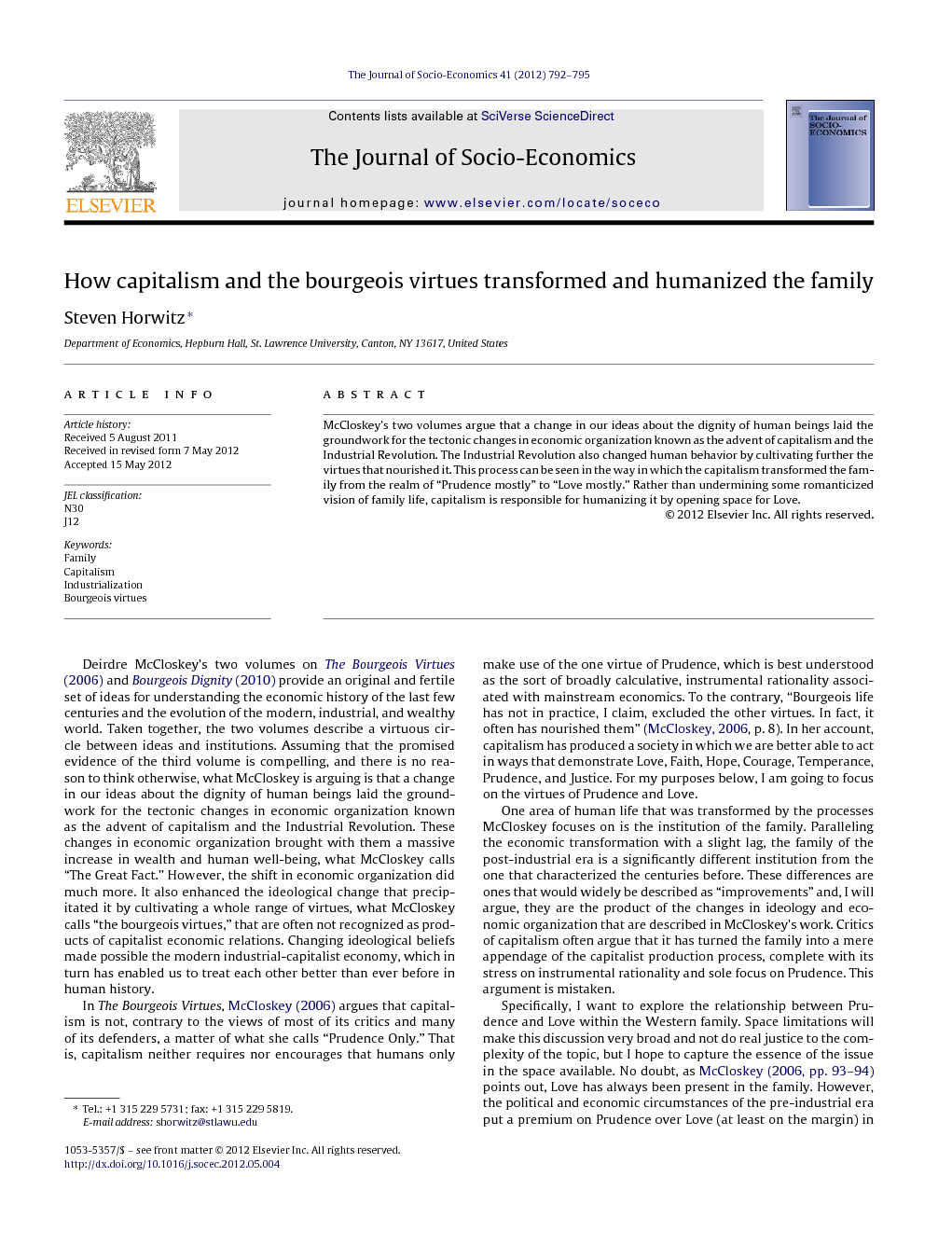 McCloskey's two volumes argue that a change in our ideas about the dignity of human beings laid the groundwork for the tectonic changes in economic organization known as the advent of capitalism and the Industrial Revolution. The Industrial Revolution also changed human behavior by cultivating further the virtues that nourished it. This process can be seen in the way in which the capitalism transformed the family from the realm of “Prudence mostly” to “Love mostly.” Rather than undermining some romanticized vision of family life, capitalism is responsible for humanizing it by opening space for Love.

Deirdre McCloskey's two volumes on The Bourgeois Virtues (2006) and Bourgeois Dignity (2010) provide an original and fertile set of ideas for understanding the economic history of the last few centuries and the evolution of the modern, industrial, and wealthy world. Taken together, the two volumes describe a virtuous circle between ideas and institutions. Assuming that the promised evidence of the third volume is compelling, and there is no reason to think otherwise, what McCloskey is arguing is that a change in our ideas about the dignity of human beings laid the groundwork for the tectonic changes in economic organization known as the advent of capitalism and the Industrial Revolution. These changes in economic organization brought with them a massive increase in wealth and human well-being, what McCloskey calls “The Great Fact.” However, the shift in economic organization did much more. It also enhanced the ideological change that precipitated it by cultivating a whole range of virtues, what McCloskey calls “the bourgeois virtues,” that are often not recognized as products of capitalist economic relations. Changing ideological beliefs made possible the modern industrial-capitalist economy, which in turn has enabled us to treat each other better than ever before in human history. In The Bourgeois Virtues, McCloskey (2006) argues that capitalism is not, contrary to the views of most of its critics and many of its defenders, a matter of what she calls “Prudence Only.” That is, capitalism neither requires nor encourages that humans only make use of the one virtue of Prudence, which is best understood as the sort of broadly calculative, instrumental rationality associated with mainstream economics. To the contrary, “Bourgeois life has not in practice, I claim, excluded the other virtues. In fact, it often has nourished them” (McCloskey, 2006, p. 8). In her account, capitalism has produced a society in which we are better able to act in ways that demonstrate Love, Faith, Hope, Courage, Temperance, Prudence, and Justice. For my purposes below, I am going to focus on the virtues of Prudence and Love. One area of human life that was transformed by the processes McCloskey focuses on is the institution of the family. Paralleling the economic transformation with a slight lag, the family of the post-industrial era is a significantly different institution from the one that characterized the centuries before. These differences are ones that would widely be described as “improvements” and, I will argue, they are the product of the changes in ideology and economic organization that are described in McCloskey's work. Critics of capitalism often argue that it has turned the family into a mere appendage of the capitalist production process, complete with its stress on instrumental rationality and sole focus on Prudence. This argument is mistaken. Specifically, I want to explore the relationship between Prudence and Love within the Western family. Space limitations will make this discussion very broad and not do real justice to the complexity of the topic, but I hope to capture the essence of the issue in the space available. No doubt, as McCloskey (2006, pp. 93–94) points out, Love has always been present in the family. However, the political and economic circumstances of the pre-industrial era put a premium on Prudence over Love (at least on the margin) in how the family functioned from day to day. Love was indulged when it could be, but Prudence frequently demanded that Love take a back seat. What capitalism did was to invert the relative importance of Prudence and Love. Capitalism made it possible for families to be first and foremost about Love and has led us to think that family decisions made by Prudence alone are not very virtuous. To the extent capitalism's success requires functional families, McCloskey is quite right to say that capitalism both promotes and requires the bourgeois virtue of Love. Contrary to the critics, it was prior to capitalism and industrialization that the family would have been more accurately described as an “appendage” to the economy. Capitalism and industrialization humanized the family and turned it into an institution largely centered around Love and emotional satisfaction and other of the bourgeois virtues, rather than being almost all about Prudence.

It is in this way that the evolution of the modern family is an application of McCloskey's work. Capitalism offered ways to earn income outside of the household and in doing so slowly eliminated the family's role as an institution of market production and thereby removed it from the realm of narrow economic calculation and “Prudence Only,” or at least “Prudence Mostly.” Without a need to treat family members instrumentally as parts of a production process, and with the means to treat them (and especially wives) as ends in themselves now available through higher incomes, the family, thanks to capitalism, was able to bring to the surface Love and the rest of the emotional–psychological factors we now think of as central to what families do. The improved economic and legal status of women and children, the gradual equalization of the marital relationship, and the ascendance of Love as the basis for marriage and the parent–child relationship all reflect the ways in which capitalism made possible and “nourished” the bourgeois virtues. As Prudence began to spend more time out of the household and in the market, capitalism made it possible for Love (and perhaps Faith and Hope as well), to come in from the cold and take its rightful place at the family table. In making this transition possible, capitalism thereby humanized the family. The somewhat tragic irony is that capitalism is in our own time often accused of reducing interpersonal relationships and other higher ideals to naked, financial self-interest and/or narrow calculative rationality, when in fact it was capitalism that humanized the most deeply interpersonal of all human institutions – the family.