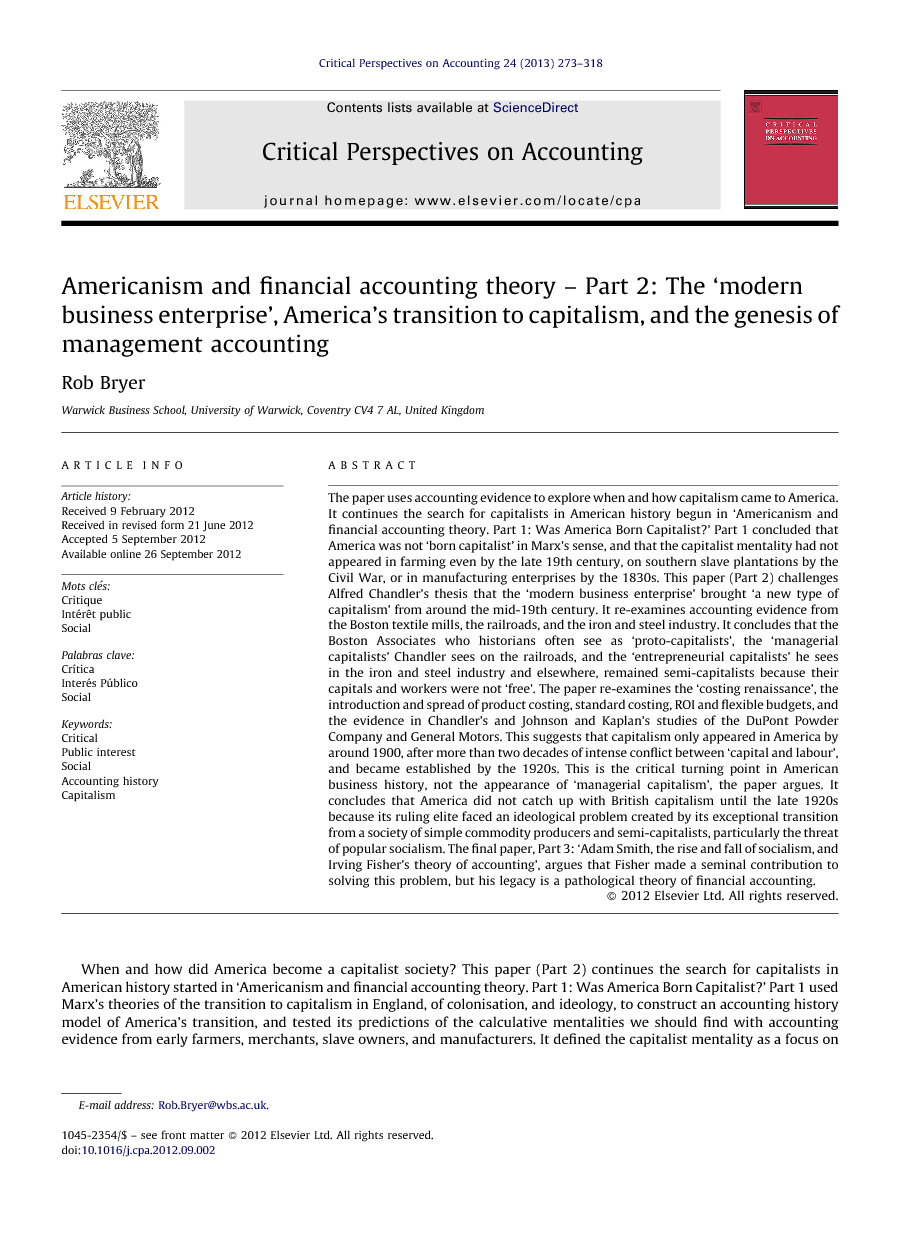 The paper uses accounting evidence to explore when and how capitalism came to America. It continues the search for capitalists in American history begun in ‘Americanism and financial accounting theory. Part 1: Was America Born Capitalist?’ Part 1 concluded that America was not ‘born capitalist’ in Marx's sense, and that the capitalist mentality had not appeared in farming even by the late 19th century, on southern slave plantations by the Civil War, or in manufacturing enterprises by the 1830s. This paper (Part 2) challenges Alfred Chandler's thesis that the ‘modern business enterprise’ brought ‘a new type of capitalism’ from around the mid-19th century. It re-examines accounting evidence from the Boston textile mills, the railroads, and the iron and steel industry. It concludes that the Boston Associates who historians often see as ‘proto-capitalists’, the ‘managerial capitalists’ Chandler sees on the railroads, and the ‘entrepreneurial capitalists’ he sees in the iron and steel industry and elsewhere, remained semi-capitalists because their capitals and workers were not ‘free’. The paper re-examines the ‘costing renaissance’, the introduction and spread of product costing, standard costing, ROI and flexible budgets, and the evidence in Chandler's and Johnson and Kaplan's studies of the DuPont Powder Company and General Motors. This suggests that capitalism only appeared in America by around 1900, after more than two decades of intense conflict between ‘capital and labour’, and became established by the 1920s. This is the critical turning point in American business history, not the appearance of ‘managerial capitalism’, the paper argues. It concludes that America did not catch up with British capitalism until the late 1920s because its ruling elite faced an ideological problem created by its exceptional transition from a society of simple commodity producers and semi-capitalists, particularly the threat of popular socialism. The final paper, Part 3: ‘Adam Smith, the rise and fall of socialism, and Irving Fisher's theory of accounting’, argues that Fisher made a seminal contribution to solving this problem, but his legacy is a pathological theory of financial accounting.

Capitalism did not exist in America even by the 1890s. A survey of accounting by the Boston textile mills, the railroads, the iron and steel industry, shows that ‘proto-capitalists’, ‘managerial capitalists’, and the ‘entrepreneurial capitalists’ running big businesses, were only part capitalist in Marx's sense, only semi-capitalists. The paper re-examined the history of management accounting, the introduction and spread of product costing, standard costing, ROI and flexible budgets, exemplified in Chandler's and Johnson and Kaplan's studies of DuPont and General Motors. We need more research, but this evidence suggests that capitalism only appeared around 1900 after more than two decades of intense conflict between capital and labour, and only became established by around 1920. It seems unlikely that DuPont and General Motors’ systems were unique. Assuming they were not, “American industrial firms”, having by 1925 “developed virtually every management accounting procedure known today” (Johnson and Kaplan, 1987, p. 125), had taken control of their valorisation processes, had achieved the direct real subordination of managerial labour, probably down to supervisors, and of workers indirectly, if not directly. Tightly controlled, giant multi-divisional capitalist corporations owned by diversified shareholders, run by professional managers employing free wageworkers in large factories using machinery, mass-producing for national and international markets, dominated the US economy (Chandler, 1959, Chandler, 1962, Chandler, 1977, Cheffins, 2003, Hannah, 2007, Licht, 1995, Navin and Sears, 1955, Roy, 1997, Trachtenberg, 1982 and Werner, 1981). However, before they could install and operate ROI-driven management accounting systems, business and political leaders had to subdue the surge of labour and social unrest provoked by big business that peaked in the first two decades of the 20th century (Kolko, 1963 and Lichtenstein et al., 2000). These systems had socio-economic preconditions, particularly “lack of resistance from organised labour” (Hopper and Armstrong, 1991, p. 407), which did not exist generally until the 1920s. Then what was true of General Motors was true generally: “the successful operation of [its] … accounting system depended on the inability of organised labour to contest speed-ups and seasonal lay-offs” (Hopper and Armstrong, 1991, p. 423). It was not “accidental that Johnson and Kaplan's apogee of management accounting development was also an age of anti-union violence and espionage” (Hopper and Armstrong, 1991, p. 407), or that it came after a period of exceptional class conflict that resulted, Part 3 argues, in the ideological defeat of popular socialism. This defeat could explain the exceptionally aggressive “management style” and quiescent “pattern of labor activism” in America that produced its exceptional use of budgets and standard costing compared to Britain where socialism was embedded in stronger and more aggressive trade unions that had some state legitimacy (Wardell and Weisenfeld, 1991, pp. 655, 662, 665, 666). The appearance of big business in America generated a hostile and ‘class conscious’ labour movement, created conflict with middle class farmers and small employers, led to the formation of a ‘Popular Party’ that sought the destruction of the trusts and big business, and to the spectre of socialism. Business and political leaders repressed labour and radical political opponents, but force worked only to a point, and could be counter productive, particularly as big business had created a serious ideological problem for the ruling elite. The solution, Part 3 argues, was ‘corporate liberalism’ (Sklar, 1988), which claimed that corporations would behave ‘socially responsibly’ and earn only ‘fair profits’ with appropriate government regulation, particularly requiring ‘publicity’, but this left unanswered the socialists’ criticism that capitalism was inherently socially irresponsible, that all profit was ‘unfair’. To understand the problem, the solution, and its consequences, Part 3 argues, we must understand its origins in the long-running ideological conflict in America between simple commodity producers and semi-capitalists on one side and ‘capitalists’ on the other. It argues that Fisher took up the socialists’ challenge in this context through his acclaimed theory of accounting, which justified big business to the middle classes by reconciling the mentalities of the simple commodity producer, the semi-capitalist, and the money capitalist, reconciling Wall Street and Main Street, whilst simultaneously criticising socialism. Fisher claimed accounting practice supported his theory, but Part 3 shows he did not understand DEB or the accountants’ ‘cost theory of value’, and concludes that his theory introduced pathology by disconnecting accounting from reality.