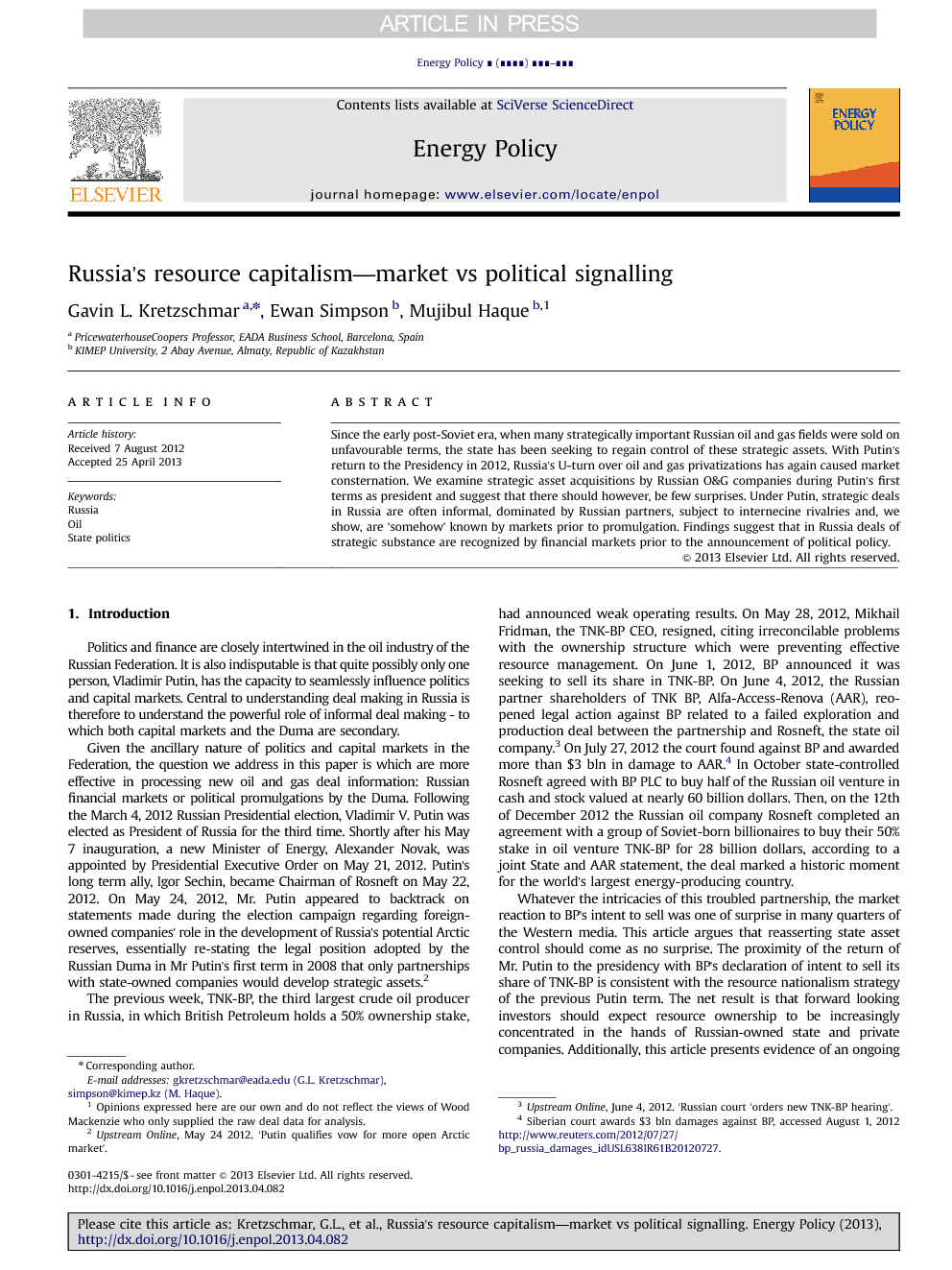 Since the early post-Soviet era, when many strategically important Russian oil and gas fields were sold on unfavourable terms, the state has been seeking to regain control of these strategic assets. With Putin's return to the Presidency in 2012, Russia's U-turn over oil and gas privatizations has again caused market consternation. We examine strategic asset acquisitions by Russian O&G companies during Putin's first terms as president and suggest that there should however, be few surprises. Under Putin, strategic deals in Russia are often informal, dominated by Russian partners, subject to internecine rivalries and, we show, are ‘somehow’ known by markets prior to promulgation. Findings suggest that in Russia deals of strategic substance are recognized by financial markets prior to the announcement of political policy.

Our sector study presents comparative market evidence for economic and political signals analysis of strategic oil and gas acquisitions by Russian oil and gas companies over the period 2000–2006. We present market evidence that economic abnormal returns for companies are both more observable, more significant, and precede political announcements. Importantly, the proportion of reserves acquired by state run oil companies in the period 2000–2006 prior to the Duma announcement is material. Global demand coupled with Russia's capability of meeting global oil and gas demand has resulted in the realization that strategic resource assets are key to Russia's security. This realization has, in turn, resulted in the Duma's stated 2008 objective of consolidating domestic control over strategic economic assets. On a percentile basis, the 44%, 26% and 35% of corporate reserves acquired by LUKoil, Gazprom, and Rosneft respectively in the three years are clear indicators of corporate events that precede political announcements in the Putin era. Our event study and market capitalization present short and long-term market evidence of market reaction to politically signalled control consolidation. Political and economic evidence is provided which shows that the strategic resource deals that enabled Gazprom, LUKoil, Rosneft and TNK-BP to consolidate control over 70% of Russian reserves display earlier and greater explanatory power than political announcements. For companies without market evidence (Rosneft and TNK-BP) we show that de-facto asset take-over also preceded any political announcements. Significant long-term outperformance by Russian players, particularly by state-owned Gazprom and Rosneft, suggests that state backing is a vital factor determining the success of players in Russia's state-managed capitalism. Consistent with Ickes and Ofer (2006) we show that strategic deals have resulted in a concentration of control over Russian O&G reserves and that under the previous Putin administration economic signals preceded and were more significant than Duma announcements, a trend likely to continue in the third Putin term. There are significant strategic and policy implications of this evidence for international oil companies dealing in Russia. It is likely that the legal manoeuvering and market signaling in Russia which characterized the first Putin terms will continue. A strong shift of the locus of control toward Russian-owned state and private companies, most recently highlighted by the TNK-BP sale to Rosneft, foreign IOCs are likely to be excluded from strategic asset control in Russia. Given this shift, it is unlikely that any future ownership or production sharing of new developments such as the Russian Arctic will be particularly favorable for IOCs.7 The evidence presented suggests that the Russian pattern of re-taking control over strategic assets begun in the first Putin terms will continue. Whatever the manner of enforcing state control, it is also clear that legal manoeuvering and market signals will precede any political announcements.