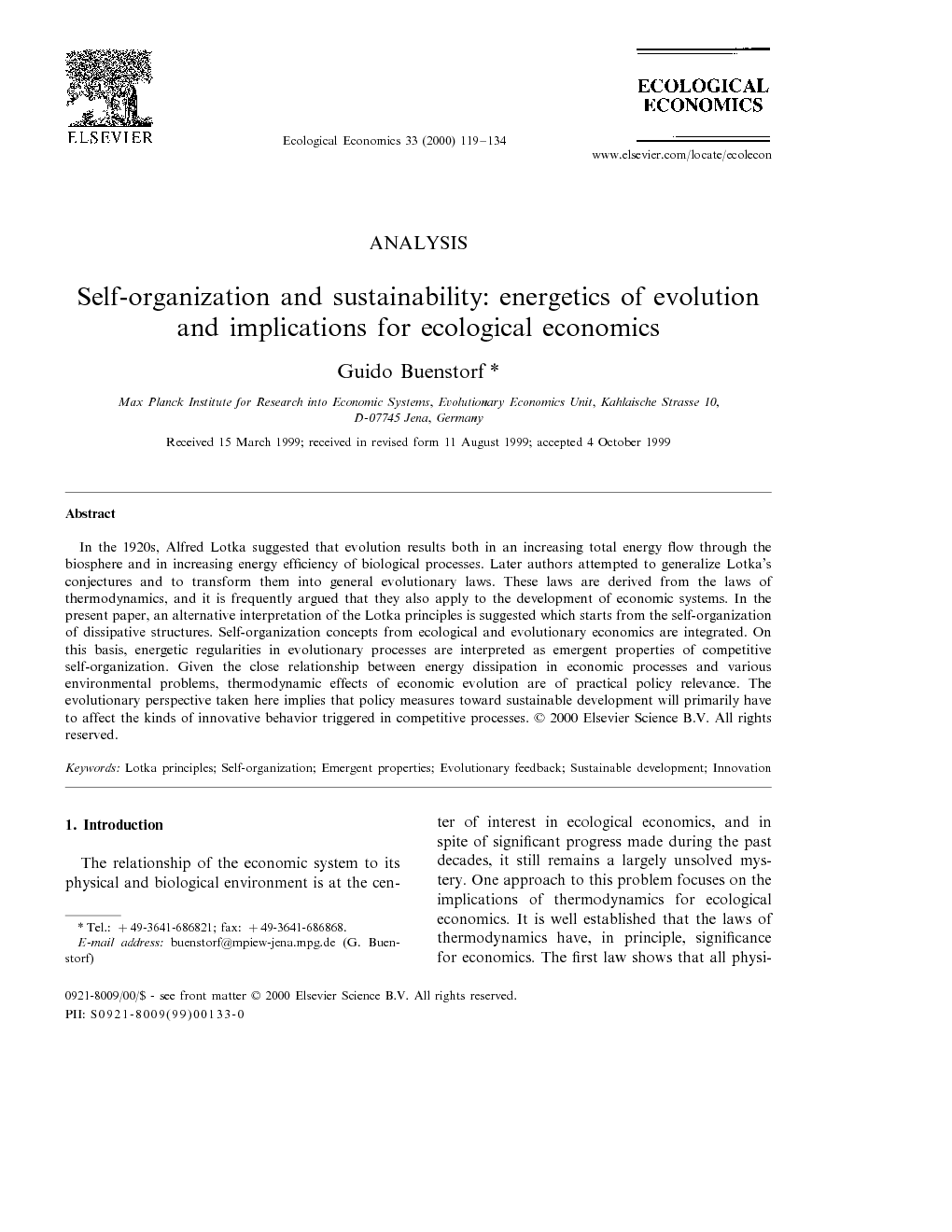 In the 1920s, Alfred Lotka suggested that evolution results both in an increasing total energy flow through the biosphere and in increasing energy efficiency of biological processes. Later authors attempted to generalize Lotka's conjectures and to transform them into general evolutionary laws. These laws are derived from the laws of thermodynamics, and it is frequently argued that they also apply to the development of economic systems. In the present paper, an alternative interpretation of the Lotka principles is suggested which starts from the self-organization of dissipative structures. Self-organization concepts from ecological and evolutionary economics are integrated. On this basis, energetic regularities in evolutionary processes are interpreted as emergent properties of competitive self-organization. Given the close relationship between energy dissipation in economic processes and various environmental problems, thermodynamic effects of economic evolution are of practical policy relevance. The evolutionary perspective taken here implies that policy measures toward sustainable development will primarily have to affect the kinds of innovative behavior triggered in competitive processes.

The relationship of the economic system to its physical and biological environment is at the center of interest in ecological economics, and in spite of significant progress made during the past decades, it still remains a largely unsolved mystery. One approach to this problem focuses on the implications of thermodynamics for ecological economics. It is well established that the laws of thermodynamics have, in principle, significance for economics. The first law shows that all physical inputs of production processes will eventually be transformed into exactly the same amount of outputs, whether these be desired products or unwanted wastes. The second law makes clear that all development and maintenance of organized structures requires some input of energy.1 However, the specific way in which thermodynamics can be applied to economic problems is still under debate (for general discussions, see for example Georgescu-Roegen, 1971, Georgescu-Roegen, 1975, Georgescu-Roegen, 1977, Georgescu-Roegen, 1986, Proops, 1983, Proops, 1985, O'Connor, 1991, Binswanger, 1993, Ruth, 1995, Ruth, 1996, Faber et al., 1996, Söllner, 1997 and Ayres, 1998). In particular, it would seem central to establish a theory of the thermodynamics of economic evolution capable of explaining the development of energy and possibly materials throughput as economies grow and develop over time. Such a theory would not only be of academic interest. It could also serve as a starting point for analyzing conditions for and possibilities of a sustainable use of resources. Moreover, since resource use is most often related to some kind of environmental stress, it should also yield relevant insights for the analysis of environmental effects of economic evolution. Evolutionary biologists face a similar problem: there is no established theory of the relationship between biological evolution and the laws of thermodynamics. However, in biology a lively discussion on this subject has been going on for the past three decades [for an overview, see Depew and Weber (1995), chapters 17 and 18]. Much of the discussion originates from the work of Alfred Lotka who proposed in 1922 a relationship between biological evolution and the energy intakes of living organisms. Lotka argued that natural selection tends to result in (i) increasing energy flow through biological systems and also (ii) increasing energy efficiency of biological processes. His conjectures were by later authors referred to as ‘Lotka principles’ and transformed into general thermodynamic laws of evolution. These laws modify Lotka's ideas in significant ways. They have often been related to recent developments in theoretical thermodynamics as put forward by the Prigogine school (Prigogine et al., 1972a, Prigogine et al., 1972b, Prigogine, 1976 and Prigogine and Stengers, 1984). Although propositions for thermodynamic laws of evolution have failed to gain widespread support among biologists, proposals for such laws keep re-emerging: recent contributions include those of Bruelisauer et al. (1996), Swenson (1997) and Wicken (1998). Discussion of the Lotka principles as alleged laws of evolution has spilled over into ecological economics. O'Connor (1991) discusses the first principle: the law of increasing energy flow. According to him, it can be interpreted in two alternative ways, both of which he finds wanting. The first alternative is to take as given actual energy sources and pathways as well as institutional and cultural restrictions, so that there is little left to be explained by the Lotka principles. The second alternative is to endogenize existing technologies and institutions and to explain them in terms of energy flow maximization — which amounts to energetic determinism. In contrast, Binswanger (1993) takes into account both principles. He rejects attempts to ground them in thermodynamics and refers to theories of ecosystem development instead. Binswanger argues that maturing ecosystems develop increasing efficiency of processes due to the competition among the species present. He proposes measures of total energy flow per unit biomass or per spatial unit as measures of ecological efficiency. Economic systems do not exhibit a similar trend toward ecological efficiency as defined by Binswanger, since energy input reductions in specific processes are outweighed by production increases so that total energy flow is still increasing. Giampietro (1993) endorses both of the Lotka principles which according to him can indeed be grounded in thermodynamics. He suggests, however, that due to specification problems, they are of little use for analyzing real-world problems. Nonetheless, Giampietro in a theoretical context uses the principles both as analogies and as physical principles operating at different levels of the hierarchical economic system. Finally, Söllner (1997) altogether dismisses the economic relevance of the Lotka principles. However, as he discusses them specifically as behavioral assumptions underlying an energy theory of value, Söllner's criticism does not necessarily apply in general. The objections against the alleged laws of evolution based on Lotka's work do not necessarily imply that his own contribution is without use. In the present paper, an alternative approach to Lotka's conjectures is presented. No attempt is made to establish them as laws of evolution. Rather, it is suggested to interpret regularities in energy flows as outcomes of the self-organization of dissipative structures which emerge in systems characterized by competitive feedback between their elements. Two strands of discussion are thus brought together which both originated in thermodynamics, but which were separated early on in economic discourse: the theory of dissipative structures and the theory of self-organization. The argument of the paper proceeds as follows. In the following section, some of the proposals for evolutionary laws based on thermodynamics are sketched. Section 3 discusses the empirical evidence for trends in the energy throughput of developing and evolving systems. To prepare the alternative explanation of Lotka's conjectures, Section 4 contains a brief exposition of self-organization concepts in the sciences and in economics. Based on these concepts, Section 5 returns to the Lotka principles. Section 6 derives some implications of the argument for sustainable economic development. The concluding section summarizes.

The present paper has tried to make a contribution to clarifying the thermodynamics of economic evolution. It has drawn on the discussion in biology concerning the relationship between the laws of thermodynamics and biological processes of evolution and ecosystem development. In this discussion, various thermodynamic ‘laws of evolution’ have been proposed which are derived from Lotka's conjectures about increasing energy flow and increasing energy efficiency in the course of biological evolution. Based on concepts developed in the sciences, an alternative interpretation of the Lotka principles as emergent properties of the self-organization of dissipative structures in multi-agent systems has been proposed here. To sum up, several facets of this reinterpretation seem worth recollecting. First, in contrast to the alleged evolutionary laws, the present interpretation of the Lotka principles comes closer to Lotka's original concept in that it starts from the level of organisms and agents. No energetic determinism is claimed, but thermodynamic regularities are seen as effects of micro-level interactions. Second, it has been shown that the Lotka principles can be related to present-day theories of self-organization. They can be interpreted as emergent properties of a similar quality as the coordination achieved through economic market processes. And third, the suggested explanation of evolutionary regularities in the energy throughput of economic systems may be of immediate interest to ecological economics. It may be the starting point for a set of important questions calling for further research. Which of the effects (increasing energy throughput or increasing energy efficiency) prevails under which conditions? What role do specific norms and values play for these conditions? And how can they be influenced by deliberate policy measures? These questions cannot be answered by thermodynamic theories, but they require complementary efforts in social scientific research.