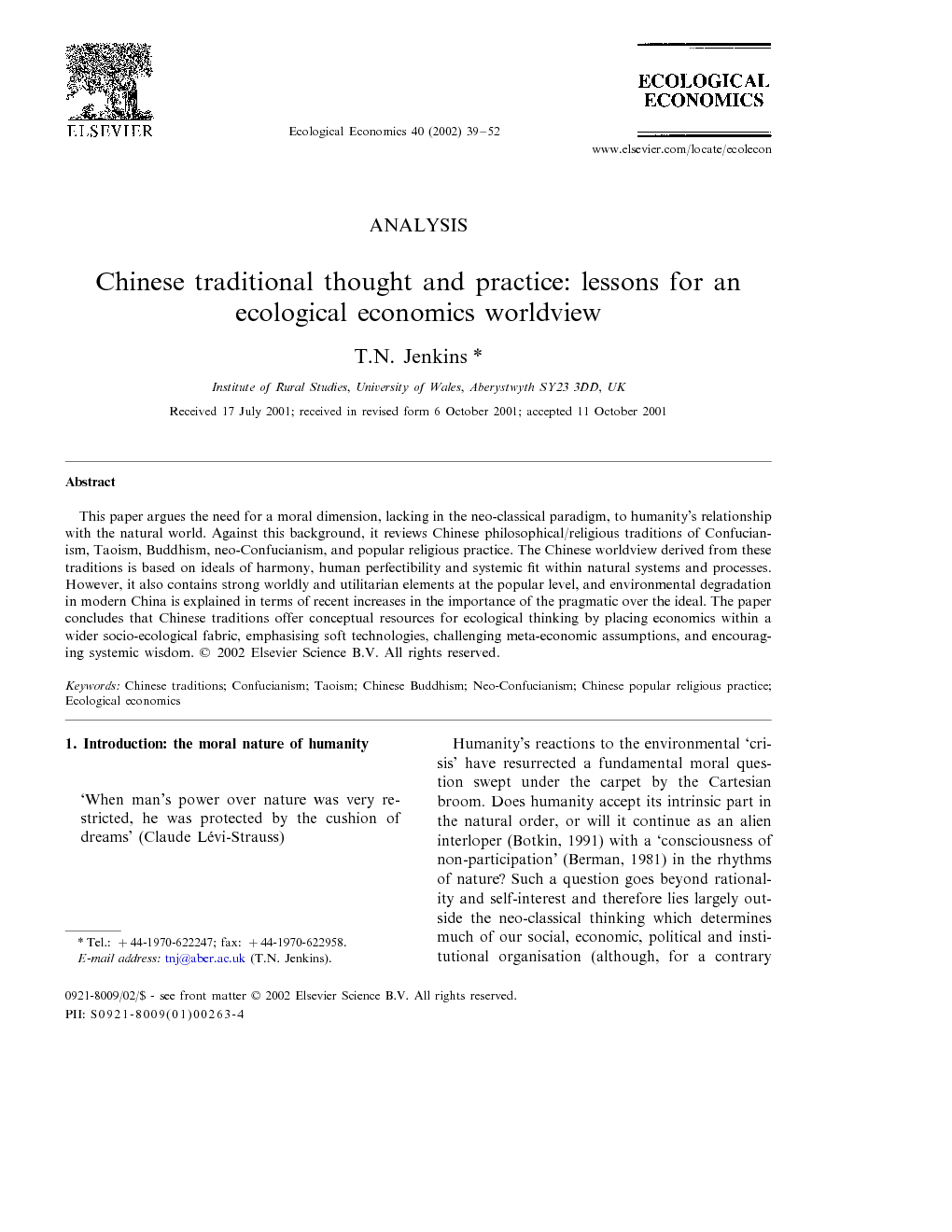 This paper argues the need for a moral dimension, lacking in the neo-classical paradigm, to humanity's relationship with the natural world. Against this background, it reviews Chinese philosophical/religious traditions of Confucianism, Taoism, Buddhism, neo-Confucianism, and popular religious practice. The Chinese worldview derived from these traditions is based on ideals of harmony, human perfectibility and systemic fit within natural systems and processes. However, it also contains strong worldly and utilitarian elements at the popular level, and environmental degradation in modern China is explained in terms of recent increases in the importance of the pragmatic over the ideal. The paper concludes that Chinese traditions offer conceptual resources for ecological thinking by placing economics within a wider socio-ecological fabric, emphasising soft technologies, challenging meta-economic assumptions, and encouraging systemic wisdom.

‘When man's power over nature was very restricted, he was protected by the cushion of dreams’ (Claude Lévi-Strauss) Humanity's reactions to the environmental ‘crisis’ have resurrected a fundamental moral question swept under the carpet by the Cartesian broom. Does humanity accept its intrinsic part in the natural order, or will it continue as an alien interloper (Botkin, 1991) with a ‘consciousness of non-participation’ (Berman, 1981) in the rhythms of nature? Such a question goes beyond rationality and self-interest and therefore lies largely outside the neo-classical thinking which determines much of our social, economic, political and institutional organisation (although, for a contrary view of the usefulness of neo-classical economics, see Turner et al., 1994). Rationality implies analysis, instrumentality and the exclusion of intuitive and moral considerations from decision-making, thereby undermining the possibility of an apprehension of the natural world which is experiential and participatory (Wilber, 1981). Yet, human decisions which affect the environment—e.g. the future of a species or the environmental features available to future generations—involve ethical choices that cannot be resolved by ‘rational’ or ‘utilitarian’ economic calculations involving monetary valuation, discounting and the allocation of individual resources (Hamilton, 1994). Environmentalism goes beyond concern for irreversible transformations of the natural world by exploring the wider implications of humanity's loss of cosmic unity and humanity's need to establish a ‘post-rational’ and less ‘autistic’ (Berry, 1988) relationship with the natural world. Such explorations recognise psychological/spiritual (as well as material/social) well-being and extend the field of ethics beyond humanity to include Leopold's (1994) ‘biotic community’. In creating new paradigms to deepen the moral sensitivity of the ‘enlightenment mentality’ (Tu, 1998a) and resurrect the ‘cushion of dreams’ made redundant by technological progress, it seems appropriate to examine less familiar philosophical, religious and moral traditions characterised by ‘consciousness of participation’ and potentially sensitive to ecological harmony. Rationality, after all, can be used to provide humanity with the possibility of an ethic of responsibility towards nature (Berger, 1980). This paper adopts the premise that such traditions may offer conceptual resources for understanding issues of interest to ecological economics and for guiding humanity's responses. Traditions can assist in the identification and clarification of moral truths intuitively felt by humanity, but inadequately addressed by neo-classical thinking—such thinking, for example, only articulates part of the value that humanity finds in nature. Further, traditions may provide reasons, incentives or capacities for particular types of behaviour—related, for example, to ecological harmony or social responsibility. From a sociological perspective, inherited cultural traditions provide humanity with ‘tool-kits’ of symbols, knowledge and practices which can be useful resources in constructing strategies of action for social change (Swidler, 1986). Social movement theory builds upon this to go beyond a simple utilitarian belief that only micro-economic incentives inspire collective action: taking a ‘social psychology’ perspective of socially and culturally embedded actors (Mueller, 1992), it identifies cultural framing and the role of ideational aspects in the diagnostic, prognostic and motivational dimensions of collective consensual action (Snow and Benford, 1992). In this light, Chinese traditions may offer opportunities in the face of ecological crisis—encouragingly, the Chinese for ‘crisis’ (wei-chi1) is made up of the characters for ‘danger’ and ‘opportunity’. Detailed study of Chinese ‘mental encounters’ with the environment is lacking (Worster, 1993), despite the common perception that the ‘oriental’ worldview is characterised by non-duality of humanity and cosmos and concern for harmony rather than conflict (Vachon, 1983). If such study is to have value in the ecological economics context, it must take account of why Chinese traditions have singularly failed to halt environmental degradation where they have flourished, how value convergence might be established between the environmental ethic inherent in Chinese traditions and that implicit in the main principles of ecological economics, and how Chinese traditions might exert practical influence on academic thought, public policy and private behaviour. In this paper, ‘high’ Chinese philosophical traditions are reviewed in order to extract the essence of Chinese élitist thought, and ‘low’ Chinese ethical traditions are considered in order to provide an insight into popular practice. The Chinese worldview is then examined in order to derive lessons for ecological economics, concentrating on some core areas of economic thinking and exploring some of the implications.