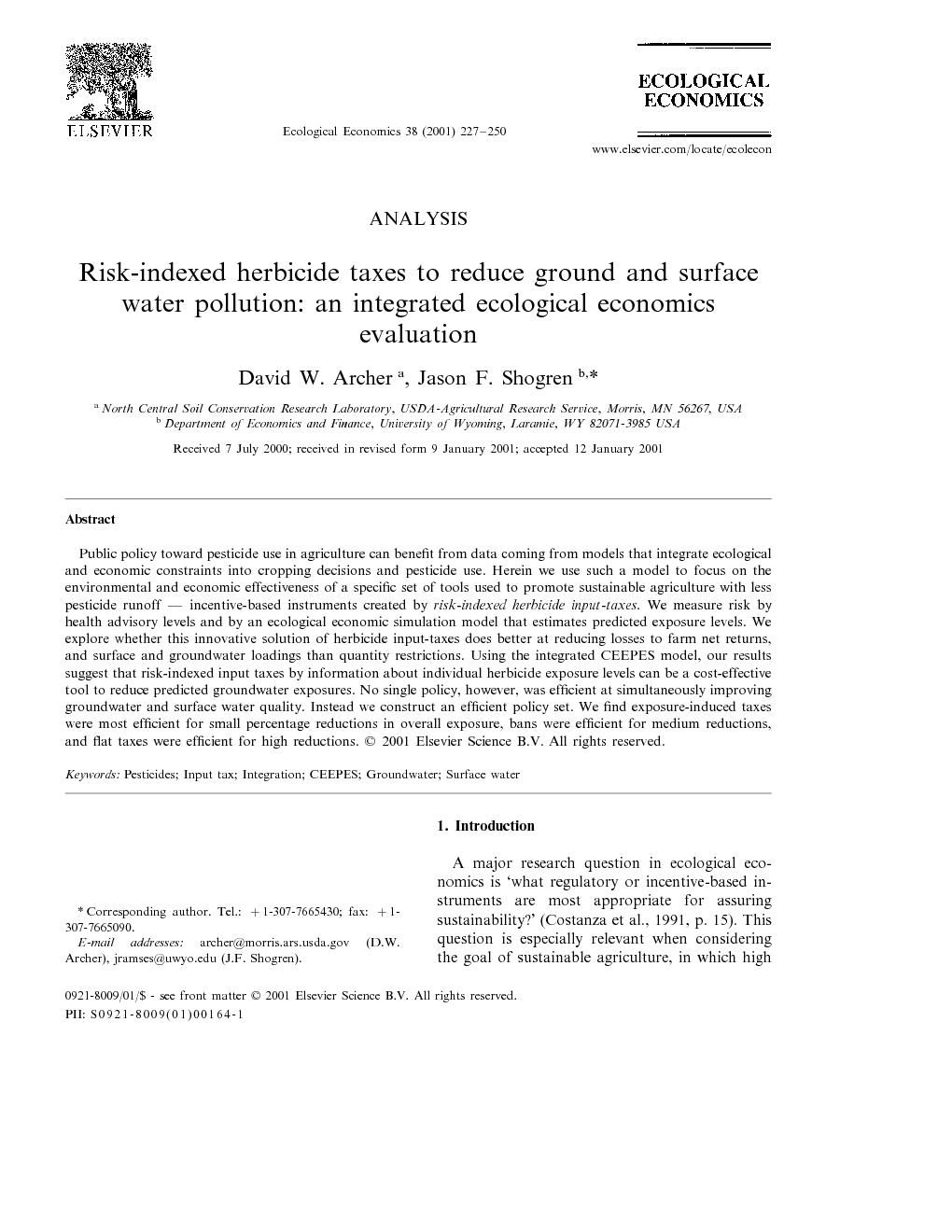 Public policy toward pesticide use in agriculture can benefit from data coming from models that integrate ecological and economic constraints into cropping decisions and pesticide use. Herein we use such a model to focus on the environmental and economic effectiveness of a specific set of tools used to promote sustainable agriculture with less pesticide runoff — incentive-based instruments created by risk-indexed herbicide input-taxes. We measure risk by health advisory levels and by an ecological economic simulation model that estimates predicted exposure levels. We explore whether this innovative solution of herbicide input-taxes does better at reducing losses to farm net returns, and surface and groundwater loadings than quantity restrictions. Using the integrated CEEPES model, our results suggest that risk-indexed input taxes by information about individual herbicide exposure levels can be a cost-effective tool to reduce predicted groundwater exposures. No single policy, however, was efficient at simultaneously improving groundwater and surface water quality. Instead we construct an efficient policy set. We find exposure-induced taxes were most efficient for small percentage reductions in overall exposure, bans were efficient for medium reductions, and flat taxes were efficient for high reductions.

Ecological economic principles promote the ideal of global sustainability. Such broad principles become more concrete from specific case studies that explore how to make the abstract operational on the ground. Herein we examine one such case study — the design of environment-indexed incentive policies to reduced pesticide use in agriculture. We use the integrated economic-ecological CEEPES model to consider how alternative risk-indexed incentivepolicies affect economic and environmental indicators of well-being, and to explore how these indexed policies compare to a traditional command and control herbicide ban. The risk-indexed incentive tax targets specific herbicides and herbicide–tillage practices based on predicted groundwater exposure levels from the CEEPES model. Our results suggest that indexed taxes can be an effective and cost-efficient tool to reduce predicted groundwater exposure. We also find no significant advantage exists to fine tune the index to include herbicide–tillage combinations: the results are similar regardless of whether we target herbicides alone or we target herbicide–tillage combinations. This occurs because individual herbicides have more effect on groundwater quality than do tillage practices. Finally, we observed that environmental advisory benchmarks alone are not useful to construct effective tax policies. No single policy tool dominated the other options for reducing groundwater exposure, surface water acute exposure, and surface water aquatic exposure. Different tools were more effective than others depending on the context. We used this data to construct an efficient policy set describing the best tool for the context using an equal weight on decreases in 1.2 m groundwater chronic exposure, surface water acute exposure, and surface water aquatic exposure. With the efficient policy set, we show both the achievable tradeoffs, and the policies that can achieve specific exposure levels. Our results indicate that exposure tax policies are most cost-efficient to achieve small percentage reductions in overall exposure, bans are most cost-efficient for moderate reductions, and flat taxes are most cost-efficient for high reductions. This suggests that the usefulness of information about predicted exposures depends on the desired reductions in exposure levels. For large reductions, for instance, crude tools like bans or flat taxes are most cost-effective. Several possible extensions to our work may be useful for future policy analysis. First, our results for combined surface water and groundwater effects are subject to change depending on the relative weights placed on changes in groundwater and surface water exposure values. Future research should focus on developing weighting schemes based on social or policy preferences. Second, our framework allows for the comparison of any number of non-point pollution policies. Policies that could be added to our analysis include targeting based on measures of surface water quality and targeting based on geographical characteristics. Finally, our analysis was restricted to the corn and sorghum weed control decisions modeled in WISH. Adding additional crops to the WISH model could expand our approach to cover all herbicide use in the region.