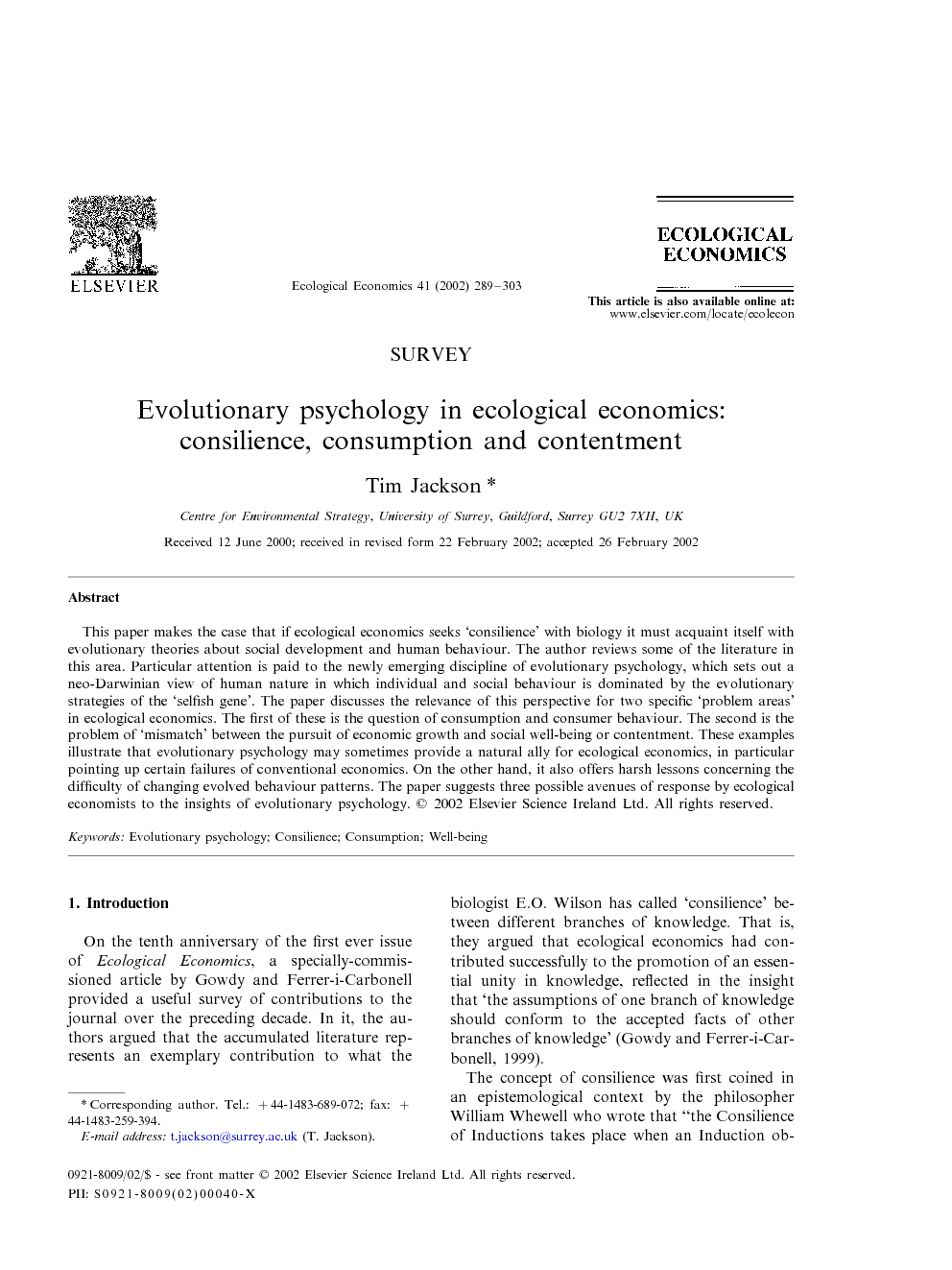 This paper makes the case that if ecological economics seeks ‘consilience’ with biology it must acquaint itself with evolutionary theories about social development and human behaviour. The author reviews some of the literature in this area. Particular attention is paid to the newly emerging discipline of evolutionary psychology, which sets out a neo-Darwinian view of human nature in which individual and social behaviour is dominated by the evolutionary strategies of the ‘selfish gene’. The paper discusses the relevance of this perspective for two specific ‘problem areas’ in ecological economics. The first of these is the question of consumption and consumer behaviour. The second is the problem of ‘mismatch’ between the pursuit of economic growth and social well-being or contentment. These examples illustrate that evolutionary psychology may sometimes provide a natural ally for ecological economics, in particular pointing up certain failures of conventional economics. On the other hand, it also offers harsh lessons concerning the difficulty of changing evolved behaviour patterns. The paper suggests three possible avenues of response by ecological economists to the insights of evolutionary psychology.

On the tenth anniversary of the first ever issue of Ecological Economics, a specially-commissioned article by Gowdy and Ferrer-i-Carbonell provided a useful survey of contributions to the journal over the preceding decade. In it, the authors argued that the accumulated literature represents an exemplary contribution to what the biologist E.O. Wilson has called ‘consilience’ between different branches of knowledge. That is, they argued that ecological economics had contributed successfully to the promotion of an essential unity in knowledge, reflected in the insight that ‘the assumptions of one branch of knowledge should conform to the accepted facts of other branches of knowledge’ (Gowdy and Ferrer-i-Carbonell, 1999). The concept of consilience was first coined in an epistemological context by the philosopher William Whewell who wrote that “the Consilience of Inductions takes place when an Induction obtained from one class of facts coincides with an Induction obtained from another different class. This Consilience is a test of the truth of the Theory in which it occurs” (Whewell, 1840). In much the same spirit, Wilson has argued that “units and processes of a discipline that conform with solidly verifiable knowledge in other disciplines have proven consistently superior in theory and practice to units and processes that do not conform” (Wilson, 1998). Gowdy and Ferrer-i-Carbonell were mostly concerned to demonstrate the extent to which ecological economics has addressed Wilson's critique of the ‘hermetic’ nature of conventional economics. “In the spirit of consilience,” they write, “ecological economists have expanded the subject matter of utility theory by recognising the complexity and social context of human behaviour and likewise have expanded the economic theory of production by taking explicit account of the constraints imposed by the environment” (Gowdy and Ferrer-i-Carbonell, 1999). Thus, the bulk of the contributions to ecological economics included in the survey falls into what might broadly be called the ‘biophysical critique’ of modern economics flowing from the work of writers such as Georgescu-Roegen (1971) and Daly (1991). In addition, the review identifies a few contributions that attempt to use evolutionary concepts to enlighten our understanding of economics. Principally, such contributions flow from the concept of coevolution, which stresses (by analogy with certain kinds of biological relationships) the dynamical interdependencies within and between natural, social and economics systems (Gowdy, 1994 and Norgaard, 1994). Virtually absent, however, from this otherwise exemplary decade of literature is any discussion of the relevance to ecological economics of neo-Darwinian theories about human nature and social evolution.1 This omission is all the more surprising in view of the critical role occupied by such theories within Wilson's own conception of consilience. Nor is Wilson alone in suggesting that the evolutionary perspective is relevant to understanding the broad spectrum of human behaviour; and to the extent that human behaviour (and, in particular, consumer behaviour) is crucial to sustainable development, the absence of evolutionary theories of human nature from the literature of ecological economics is an omission of some importance. The present paper has three specific purposes. Firstly, it provides a brief historical review of evolutionary approaches to human behaviour and social psychology. In pursuit of this aim, the first section sketches out a brief overview of early evolutionary approaches to social theory. More importantly, the second section discusses the re-emergence of neo-Darwinian views of human nature during the late twentieth century, in the guise of ‘evolutionary psychology’, and sets out some of the fundamental assumptions and implications of this resurgent body of work. Next, the paper provides two specific illustrations of the way in which the insights of evolutionary psychology might be considered relevant (if not unequivocally useful) to ecological economics. The first of these illustrations is concerned with the critical light that evolutionary psychology throws upon our understanding of consumption and consumer behaviour. The second relates to the so-called ‘mismatch’ hypothesis, which seeks to explain the divergence between economic growth and human well-being or contentment, upon which many critics of modern industrial society (including a number of ecological economists) have commented. Finally, the paper discusses the implications of these case studies (and the generic project of evolutionary psychology) for ecological economics. In particular, it highlights three distinct ways in which ecological economists might seek to respond to the evolutionary psychology literature.