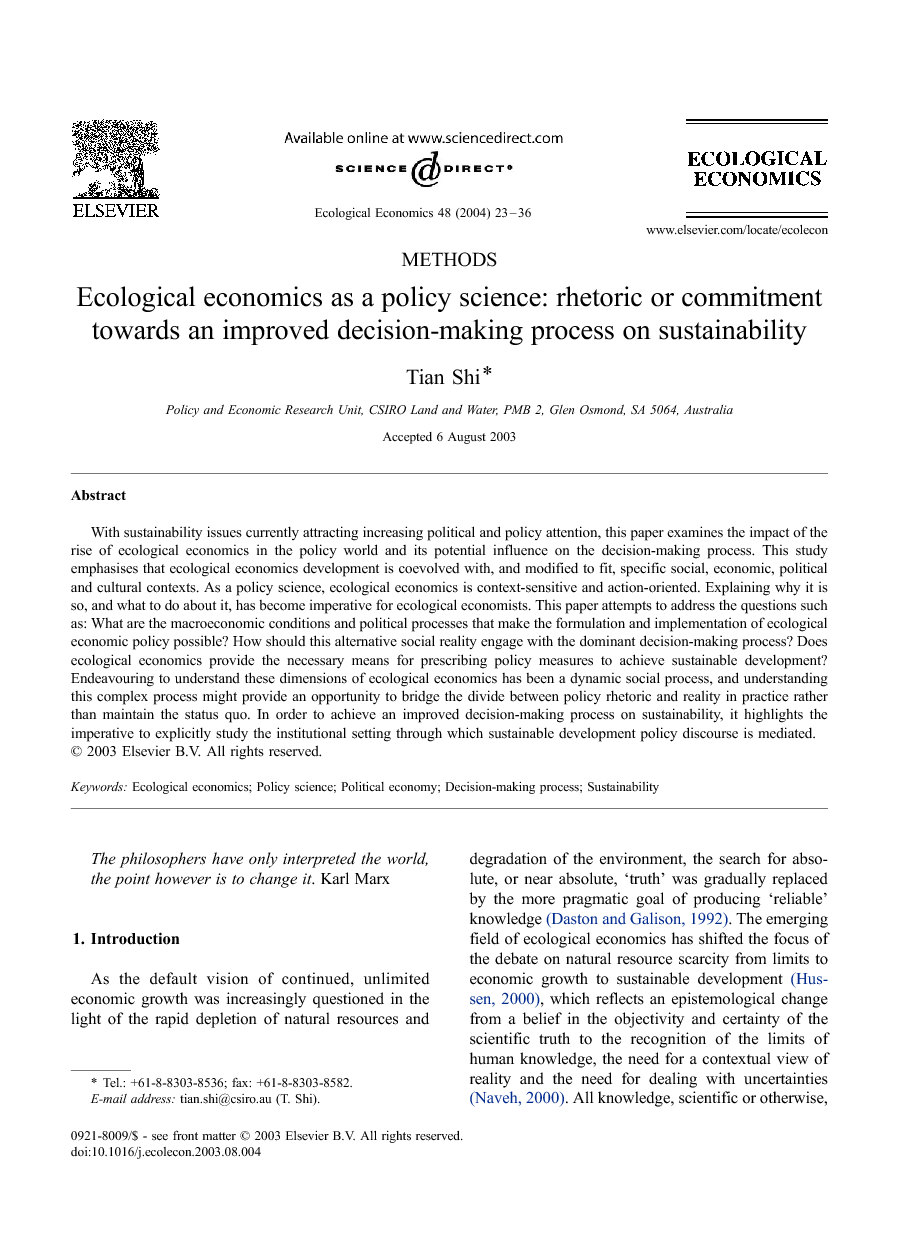 As the default vision of continued, unlimited economic growth was increasingly questioned in the light of the rapid depletion of natural resources and degradation of the environment, the search for absolute, or near absolute, ‘truth’ was gradually replaced by the more pragmatic goal of producing ‘reliable’ knowledge (Daston and Galison, 1992). The emerging field of ecological economics has shifted the focus of the debate on natural resource scarcity from limits to economic growth to sustainable development (Hussen, 2000), which reflects an epistemological change from a belief in the objectivity and certainty of the scientific truth to the recognition of the limits of human knowledge, the need for a contextual view of reality and the need for dealing with uncertainties (Naveh, 2000). All knowledge, scientific or otherwise, is produced within a particular culture and set of social arrangements. Members of a society are bound together by shared intellectual orientations, values and perceptions; in most cases they also have common material interests. In this sense, the production of knowledge has become, even more than in the past, a social activity (Nowotny et al., 2001). “By proposing that the various positions within the environmental debate are narratives or stories within a discourse, ‘meaning’ is then not subject to a fixed and final interpretation, but can instead be understood as culturally derived and context dependent” (Meppem and Bourke, 1999, p. 391). As an attempt to integrate the perspectives and methods of social and natural sciences, ecological economics has unfortunately taken its cue more from the natural science end of the spectrum as in thermodynamics and the analysis of material flows. In this regard, Jacobs (1996, p. 14) has termed ecological economics as ‘socioecological economics’ and argued that “economics must be more than ecological. It must be socioecological. That is, not only must the biophysical bases of economic activity be understood, but so must the sociological and political. Economic activity involves the transformation of physical materials and energy, but this occurs through the medium of socioecological structures, the understanding of which is equally important to economic analysis”. Sustainability issues are currently attracting more and more political and policy attention throughout the world. Sustainability requires clearly understanding the way people and their institutions interact with ecosystems, and it has meaning only in the context of specific temporal and spatial scales (Costanza et al., 2001). Ecological economics has provided an alternative perspective (i.e., to view economy and humans as subsystems of ecosystems) on human–natural interactions. This is an important first step towards effective policies for sustainability. Although the importance of this perspective has been addressed in ecological economics, its implications for policy-making remain elusive. It is important to recognise that the evolution of ecological economics is inseparable from matters such as ideology, institution, culture and society. Current policies developed by a society for sustainable development have reflected the distribution of political–economic power of interest groups within that society. Having a broad understanding of the political economy nature of this policy process becomes an essential prerequisite for the development of ecological economics as a policy science towards improved decision-making on sustainability. With this in mind, this paper attempts to outline some general ideas on the impact of ecological economics on the contemporary policy world and its potential influence on the decision-making process in a world of evolving and coevolving systems and uncertainty.

This paper has argued the importance of the rise of ecological economics as a policy science and its potential influence on the decision-making process. Existing socioeconomic and political structures determine existing valuation structures and resulting policy decisions. As a result, decision-making about natural resource issues and environmental management is often driven by the short-term imperatives of economic gain and political expediency, and there is little interest in identifying remote implications of decisions. However, the potential for such avoidance of ecological constraints is absolutely limited by thermodynamics. An ecological economic perspective that contains a realistic conception of the dynamics of human–environmental interactions has offered an operational basis for effective policies towards sustainability. The application of a conceptual framework consistent with the reality is a necessary prerequisite for effective policy-making. However, the main concerns and obstacles to achieve this goal are political and economic interests, social attitudes and cultural perceptions, not the lack of a scientific theory on sustainability. Since the way institutions are designed and have evolved strongly influences dynamic human–natural interactions, substantial attention should be paid to the transformation of values and institutions to reconcile ecological and economic priorities in the sustainable development policy discourse. As a policy-oriented, problem-driven science, ecological economics should be concerned not only with the latest scientific findings needed to inform policy-makers, but also with the potential impacts and measures on improving decision-making processes, which are crucial for the successful sustainable development policy formulation. Only through being actively engaged in these efforts can insights of ecological economics be ultimately implemented in society. Without doubt, ecological economics still has a long way to go to actually achieve the goal of better management of sustainability.