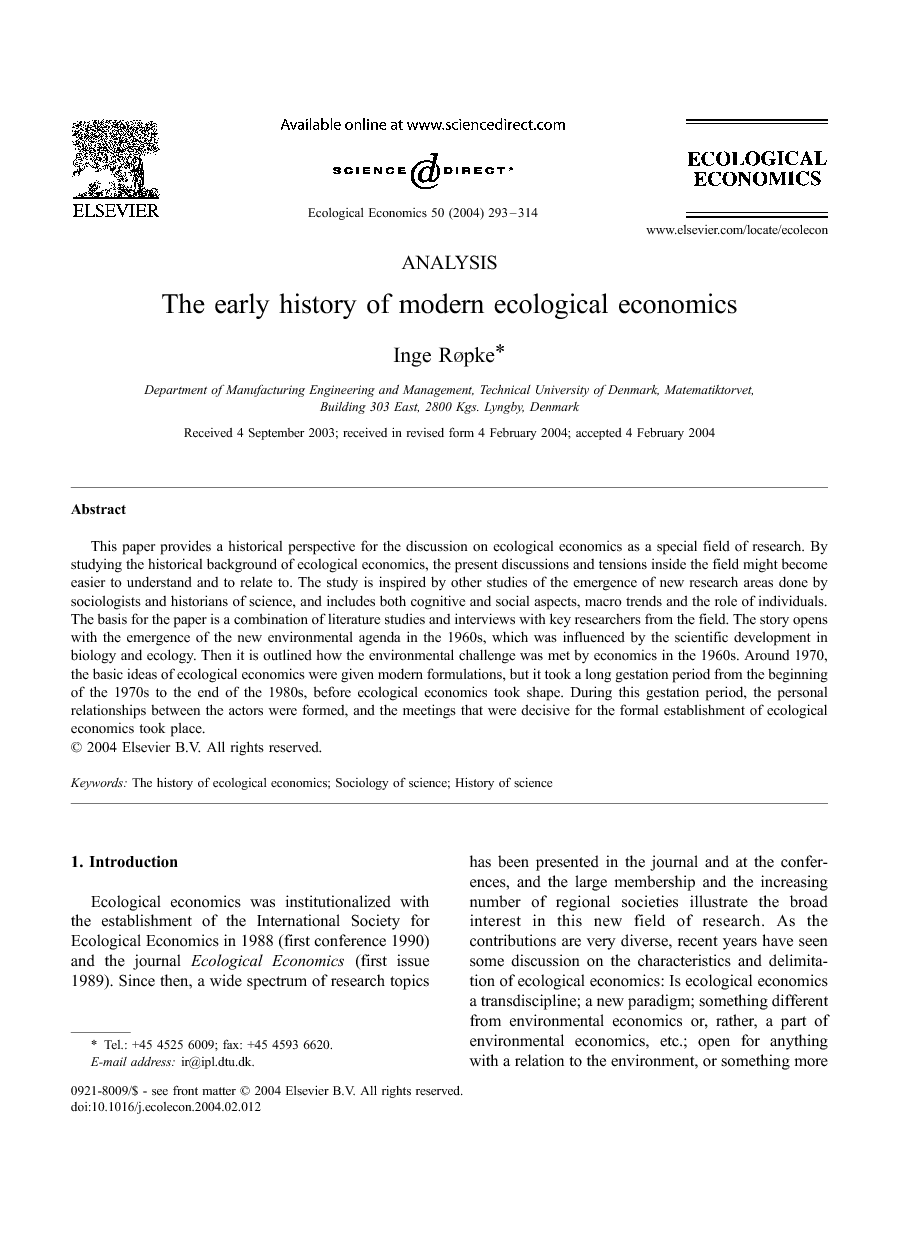 This paper provides a historical perspective for the discussion on ecological economics as a special field of research. By studying the historical background of ecological economics, the present discussions and tensions inside the field might become easier to understand and to relate to. The study is inspired by other studies of the emergence of new research areas done by sociologists and historians of science, and includes both cognitive and social aspects, macro trends and the role of individuals. The basis for the paper is a combination of literature studies and interviews with key researchers from the field. The story opens with the emergence of the new environmental agenda in the 1960s, which was influenced by the scientific development in biology and ecology. Then it is outlined how the environmental challenge was met by economics in the 1960s. Around 1970, the basic ideas of ecological economics were given modern formulations, but it took a long gestation period from the beginning of the 1970s to the end of the 1980s, before ecological economics took shape. During this gestation period, the personal relationships between the actors were formed, and the meetings that were decisive for the formal establishment of ecological economics took place.

Ecological economics was institutionalized with the establishment of the International Society for Ecological Economics in 1988 (first conference 1990) and the journal Ecological Economics (first issue 1989). Since then, a wide spectrum of research topics has been presented in the journal and at the conferences, and the large membership and the increasing number of regional societies illustrate the broad interest in this new field of research. As the contributions are very diverse, recent years have seen some discussion on the characteristics and delimitation of ecological economics: Is ecological economics a transdiscipline; a new paradigm; something different from environmental economics or, rather, a part of environmental economics, etc.; open for anything with a relation to the environment, or something more well defined? ( Turner, 1999, Spash, 1999, Bergh, 2001, Costanza, 2002, Söderbaum, 2000 and Martinez-Alier, 2002, Chapter 2). The question can also be posed in a more normative way: In which direction should ecological economics be developed in the years to come? This paper forms part of a research project dealing with these questions,1 and the intention with this specific paper is to provide a historical perspective to the discussion. By studying the historical background of ecological economics, the present discussions and tensions inside the field might become easier to both understand and to take a position on. This paper concerns only the period from the beginning of the 1960s to the end of the 1980s—what could be called the early history of modern ecological economics. The term modern ecological economics is used, because the paper refrains from covering the long history of precursors and related ideas that did not lead to an institutionalized establishment of a new field of research (these ideas are well described by Martinez-Alier, 1987, Christensen, 1987, Christensen, 2001 and Cleveland, 1987). The term early history is used to embrace the ideas and processes that led to the formal establishment of the journal and the society. With this delimitation, the paper covers only the part of the story that is necessary to discuss the questions raised above, so it can only be a step on the way to answering them, and the intention is to write a follow-up paper on the development of the research field after the establishment of the society. However, I hope that the present paper can also be useful for newcomers to ecological economics by making it easier to become familiarized with the field. As I had not taken an interest in environmental research before the end of the 1980s, I felt the need for such a survey myself, and the work with this paper has emphasized how much there is to catch up with when one has not taken part since around 1970. Finally, the story of ecological economics can be of more general interest, because the development of the field can be seen as an example of a trend towards the establishment of transdisciplinary fields, especially those crossing the border between natural and social sciences. The story told here is a combination of cognitive and social history. The focus is on the ‘social construction’ of ecological economics: How did the social conditions influence the emergence of the field? Who took the initiative? What was their motivation and their intellectual baggage? Which areas were combined in the field, and what could the participants agree on? Since Kuhn and the ensuing development of the sociology of science, a story of scientific development cannot be told as a tale about how we are becoming ever wiser. Different perspectives can co-exist; social processes, both outside and inside the research community, and personal strategies, etc. play a part in the formation of scientific fields, so the tale must include several layers. Studies of other scientific fields have been used as inspiration to give a clue as to what to look for when telling a story about ecological economics. Obviously, the paper is based on literature studies, but much more important are the interviews (a few by telephone) I had with key persons in the formation of ecological economies. These interviews have been necessary both to guide me through the jungle of literature and to give me information that is not available in a written form. From October 2002 until March 2003, I interviewed the following persons: Herman Daly, Mick Common, Robert Costanza, Sylvie Faucheux, Carl Folke, John Gowdy, AnnMari Jansson, Joan Martinez-Alier, Charles Perrings, John Proops, Clive Spash and Peter Söderbaum. Each interview gave me valuable new information, and I have many ideas regarding other persons whom I would like to interview (e.g. to include perspectives from more countries), but time and resources require that a line is drawn. As ecological economics springs from many different roots, it is difficult for one person (in this case with a socio-economic background) to cover the field in a reasonable way—and it turned out to be much more difficult than I had expected. So I hope that others will add to the picture by giving their accounts. Section 2 summarizes very briefly the theoretical inspiration from studies of other scientific fields. Then the story opens in Section 3 with the emergence of the new environmental agenda in the 1960s and the different discourses related to this agenda. The environmental agenda was influenced by the scientific development in biology and ecology that is dealt with in Section 4, focusing especially on the emergence of systems ecology. Section 5 outlines how the environmental challenge was met by economics in the 1960s, emphasizing the contributions that later became foundational for ecological economics. Around 1970, the basic ideas of ecological economics were given modern formulations, but it took a long gestation period from the beginning of the 1970s to the end of the 1980s, before ecological economics actually took shape. This gestation period is dealt with in Section 6, supplemented with an outline in Section 7 of the personal relationships between the actors and in Section 8 of the meetings that were decisive for the formal establishment of ecological economics. Finally, Section 9 summarizes briefly the processes related to the theoretical inspiration.

This version of the early history of modern ecological economics is intended to cover several different aspects and layers. In this section, some of the observations are briefly summarized and related to the theoretical inspiration from the sociology of science. Furthermore, the motivations of the initiators are brought into focus, as these were decisive for the shaping of the field. All research stems from previous ideas and experience, and in the case of ecological economics the internal intellectual processes have a long history. Most of the precursors were inspired by thermodynamics to rethink both natural and social processes in new terms, and in the modern versions the same basic ideas were reformulated and extensively elaborated. Researchers from several different fields were involved in the modern reformulations: systems ecology, different strands of economics (heterodox biophysical economics, environmental and resource economics, agricultural economics, socio-economics), energy studies mainly based on physics and engineering, and general systems theory. The development of new research techniques played a part in the elaboration and actual operationalization of the ideas, e.g. the use of radioactive isotopes in ecological research and the use of computers for modelling. Diffuse social influences and specific economic and political factors were crucial for the breakthrough of modern ecological economics. Ecology played a part in promoting the new social discourses on pollution, population, etc. that in turn created a strong social demand for research on environmental issues. Inside economics the demand led to the recovery of earlier contributions and to the application of available tools for the analysis of environmental issues. A small minority responded by developing biophysical perspectives that more basically questioned the mainstream conceptualization of the relationship between economy and nature. Such perspectives had a strong potential for radical critique of the rationale of economic growth, so they tended to be at odds with both the dominant political forces and mainstream economic thought. The more radical economists who could have been expected to take an interest in these perspectives were mainly occupied with social issues, thereby contributing to the long gestation period for ecological economics. When environmental policies began to be implemented, the political and administrative demand for research increased, but this mainly stimulated environmental economics focusing on valuation and regulatory instruments. However, the increasing environmental problems and especially the energy crisis also opened up opportunities for more heterodox research, e.g. resources became available for more transdisciplinary research. Some of the work on energy and environment took place outside the academic world and constituted external intellectual factors influencing the paths taken by academic research. In particular, energy research became one of the fields where a more general trend towards including a broader group of actors in relation to research became visible. Furthermore, the environmental issues might be seen as part of the background for the increasing interest in transdisciplinary work, which changed the immediate institutional context for researchers. Gradually an increased political demand for transdisciplinarity in education and research developed. Transdisciplinary seminars and workshops were funded, and this trend supported some of the innovators who could have had difficulties in the rigidly structured disciplinary academic world.