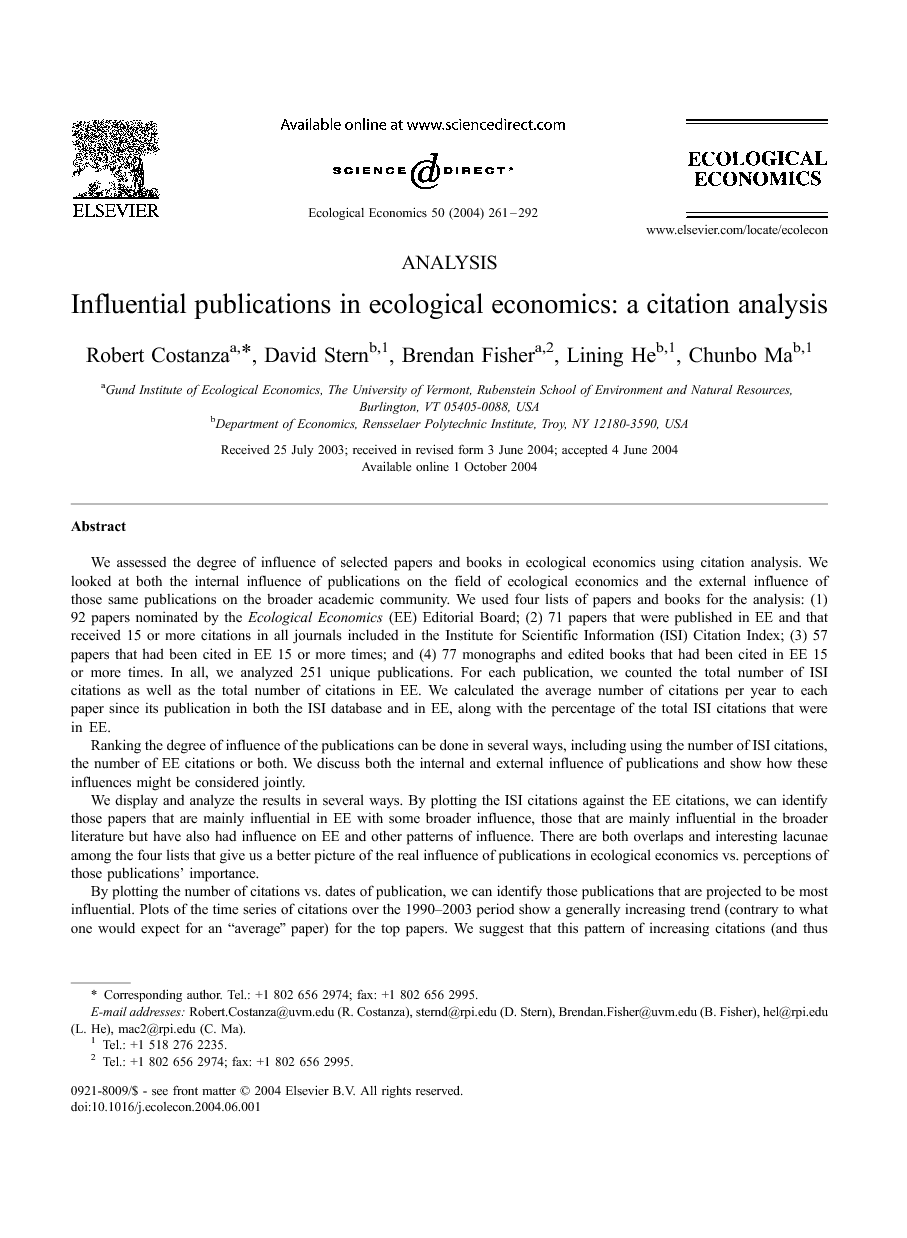 We assessed the degree of influence of selected papers and books in ecological economics using citation analysis. We looked at both the internal influence of publications on the field of ecological economics and the external influence of those same publications on the broader academic community. We used four lists of papers and books for the analysis: (1) 92 papers nominated by the Ecological Economics (EE) Editorial Board; (2) 71 papers that were published in EE and that received 15 or more citations in all journals included in the Institute for Scientific Information (ISI) Citation Index; (3) 57 papers that had been cited in EE 15 or more times; and (4) 77 monographs and edited books that had been cited in EE 15 or more times. In all, we analyzed 251 unique publications. For each publication, we counted the total number of ISI citations as well as the total number of citations in EE. We calculated the average number of citations per year to each paper since its publication in both the ISI database and in EE, along with the percentage of the total ISI citations that were in EE. Ranking the degree of influence of the publications can be done in several ways, including using the number of ISI citations, the number of EE citations or both. We discuss both the internal and external influence of publications and show how these influences might be considered jointly. We display and analyze the results in several ways. By plotting the ISI citations against the EE citations, we can identify those papers that are mainly influential in EE with some broader influence, those that are mainly influential in the broader literature but have also had influence on EE and other patterns of influence. There are both overlaps and interesting lacunae among the four lists that give us a better picture of the real influence of publications in ecological economics vs. perceptions of those publications' importance. By plotting the number of citations vs. dates of publication, we can identify those publications that are projected to be most influential. Plots of the time series of citations over the 1990–2003 period show a generally increasing trend (contrary to what one would expect for an “average” paper) for the top papers. We suggest that this pattern of increasing citations (and thus influence) over time is one hallmark of a “foundational” paper. Data used in the analysis is available for download from the International Society for Ecological Economics (ISEE) web site to allow further analysis by interested readers.

How does one assess which publications in a field are the “most important?” This question can have several possible answers. Practitioners in the field certainly have their own subjective opinions about which papers and books have been most important to them, and one could survey these practitioners as a way to assess which are the most important publications. Alternately, if one equates “most important” with “most influential,” then some easily accessible quantitative tools are available to help answer the question. The influence of the ideas contained in an academic publication is related to the number of scholars who read the publication and use the ideas. Influence can be positive or negative—but an influential idea is one that stimulates thought and discussion by others. One way to assess the academic influence of a publication is therefore to count the number of times the publication has been cited in subsequent publications by other authors. While in the past, this was a tedious and difficult task, in recent years, it has become relatively simple and accessible using electronic versions of the citation index produced by the Institute for Scientific Information (ISI). Citation analysis has therefore become much more common and itself influential in assessing the influence of individual authors, articles, books, and journals (Costanza, 1996). One recent study (Abt, 2000) compared a list of “important” papers nominated by senior practitioners in a field (astronomy in this case) with the number of citations they have generated and concluded that “important papers almost invariably produce many more citations than others, and citation counts are good measures of importance or usefulness.” Oates and Donnelly (1997) reached similar conclusions in a study of influential papers in the field of child abuse. There are, of course, well-known issues and limitations related to using citation analysis to assess influence, including the following: 1. The influence of a publication can go well beyond academia, and citation analysis will not pick up this nonacademic influence. 2. Quantity of citations is not the same as quality. A particular paper might influence only a very few others, but those few might be very deeply influenced and might make tremendous further use of the ideas. Some important ideas have lain dormant and “uncited” until they were rediscovered much later. 3. The ISI databases contain only journal articles from a select (albeit large—more than 8500 journals) group of journals and are therefore biased toward those fields that do most of their publishing in the included journals. Most of these are English language journals, and therefore, there is a bias towards the work of English-speaking scientists. The journals of some fields are underrepresented, and some fields are more focused on books rather than journals as a publication medium. While citations in books are not counted, citations to books or book chapters that occur in articles in included journals are counted. Citations to journals that are not included in the database are also included in the Citation Index. 4. Because of the slowness of the academic review process, it usually takes a year or two for citations to a publication to begin to appear. Citation analysis is therefore most useful for publications that are at least a few years old. Despite these well-known limitations, citation analysis is a powerful quantitative guide to the relative influence a publication has had on the academic community, and we have devised some techniques, discussed below, for overcoming or at least clarifying some of its limitations.

Citation analysis provides a rich and easily accessible resource for understanding the complex patterns of influence in the academic literature. Our analysis of influential publications in ecological economics has revealed some interesting patterns and provided the basis for further discussion and analysis. It can also serve as a guide for those just entering the field. We conclude that the total number of citations and average citations per year in both the field of interest (EE in this case) and ISI are useful, but by no means perfect, ways to help assess the degree of influence of academic articles to a field. This is consistent with other recent assessments of the utility of citation analysis in assessing influence or importance (Oates and Donnelly, 1997 and Abt, 2000). Table A1 and Fig. 1 shows that the Editorial Board list included many papers (62.92 or 67%) that had less than 15 citations in EE. This indicates the limitations of subjective expert assessments alone and the importance of quantitative assessments of influence, like the citation analysis we have reported here. The papers published in EE (Table A2) also turned out to be an inadequate starting point, given the recent vintage of EE and the broad, transdisciplinary range of topics and influences it includes. Papers published in EE are not yet well represented in either EE citations or ISI citations, but this can be expected to change with age, as the high rates of citation to some of these papers indicate. Fig. 1 shows that starting with a list of papers cited in EE (Table A3) is probably a better place to start. Although this method is more tedious than the first two, it yields a list of papers (and books) that are known to be important to the field and represents a more objective and reliable assessment of the full range of influences on the field. This list can be ranked by the number of EE cites, the number of ISI cites or some combination to look at the relative influence of publications in the field and on the broader community. This list overlaps with the Editorial Board list for all journal articles that are important to EE but also captures several that the Editorial Board missed (i.e., Coase, 1960 and Ludwig et al., 1993). Fig. 2 applies this approach to books. We would recommend this approach for studying influence in other fields. The relative influence of journal articles relative to books is an interesting comparison and probably varies significantly across fields. EE, being young and transdisciplinary, has been influenced heavily by books and by journal articles published in other journals, based on our analysis. This might be expected to change somewhat over time as the field matures, but the transdisciplinary nature of EE would indicate an ongoing broader range of influences than a typical disciplinary field. A more “focused” and mono-disciplinary field might be expected to rely more heavily on journal articles and more heavily on articles published in its own journal(s). We have also suggested a way to distinguish “foundational” papers based on the time trend of their citations. We have suggested that papers with an increasing time trend of citations per year over a number of years are indeed “foundational” since their scope of influence is increasing over time rather than decreasing, as one would expect for the “average” paper. Our top papers definitely exhibit this “foundational” characteristic (Fig. 4 and Fig. 5). Many of the other publications in Table A1, Table A2, Table A3 and Table A4 are still too young to adequately assess in terms of their ultimate influence, but their high rates of citation (Fig. 6 and Fig. 7) indicate that they will ultimately become very influential indeed. Finally, we have made all the data and spreadsheets used in this analysis available for download from the ISEE web site. There are many ways to use and analyze this data, and we have admittedly only scratched the surface. In addition, we had to make several decisions about how to select, rank, sort and display the data that were guided only by the goals of our analysis and our own judgment. Readers are therefore encouraged to select, rank, sort and display the data in other ways, for other goals, and to draw their own additional conclusions.