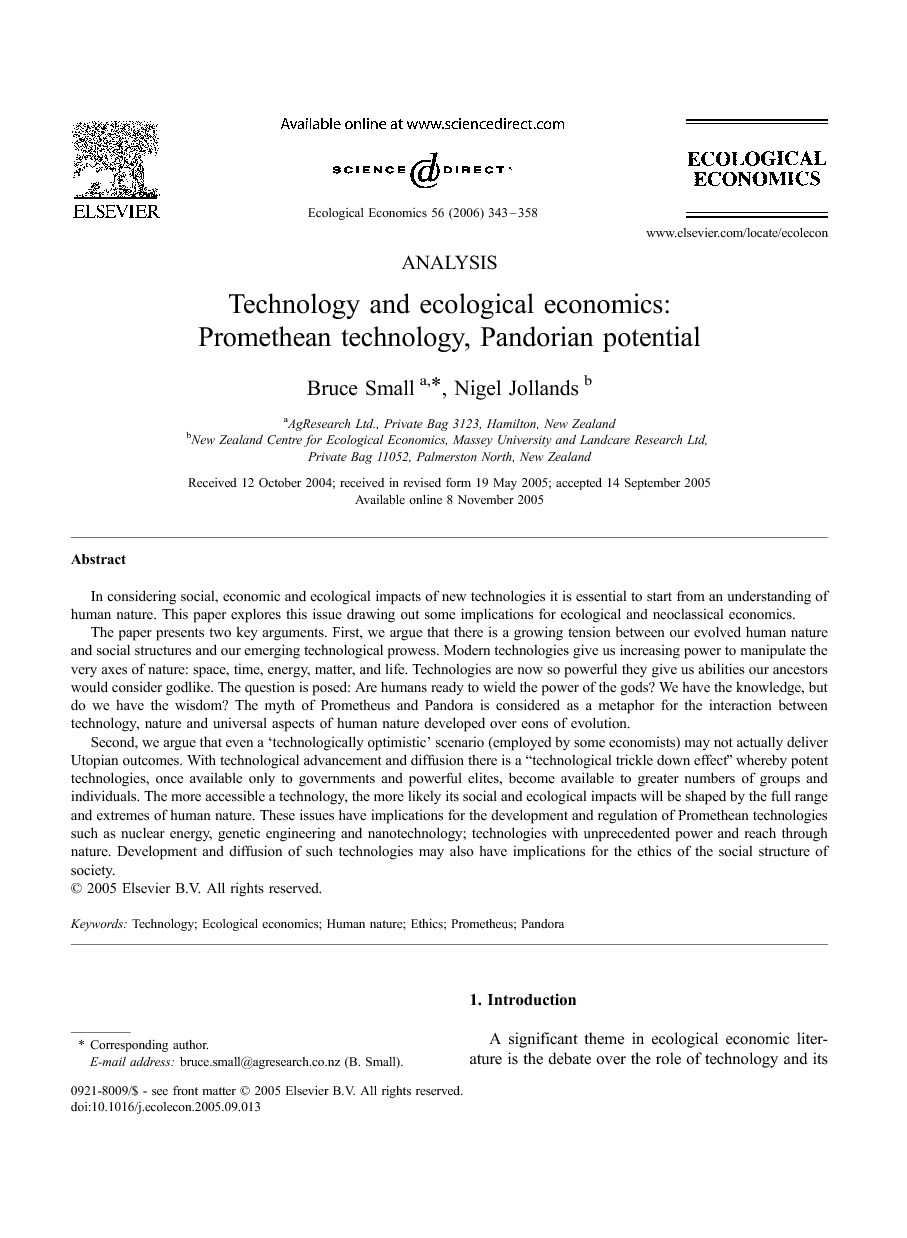 In considering social, economic and ecological impacts of new technologies it is essential to start from an understanding of human nature. This paper explores this issue drawing out some implications for ecological and neoclassical economics. The paper presents two key arguments. First, we argue that there is a growing tension between our evolved human nature and social structures and our emerging technological prowess. Modern technologies give us increasing power to manipulate the very axes of nature: space, time, energy, matter, and life. Technologies are now so powerful they give us abilities our ancestors would consider godlike. The question is posed: Are humans ready to wield the power of the gods? We have the knowledge, but do we have the wisdom? The myth of Prometheus and Pandora is considered as a metaphor for the interaction between technology, nature and universal aspects of human nature developed over eons of evolution. Second, we argue that even a ‘technologically optimistic’ scenario (employed by some economists) may not actually deliver Utopian outcomes. With technological advancement and diffusion there is a “technological trickle down effect” whereby potent technologies, once available only to governments and powerful elites, become available to greater numbers of groups and individuals. The more accessible a technology, the more likely its social and ecological impacts will be shaped by the full range and extremes of human nature. These issues have implications for the development and regulation of Promethean technologies such as nuclear energy, genetic engineering and nanotechnology; technologies with unprecedented power and reach through nature. Development and diffusion of such technologies may also have implications for the ethics of the social structure of society.

A significant theme in ecological economic literature is the debate over the role of technology and its impact on ecological and social sustainability. The importance of this debate within an ecological economic frame is demonstrated in the central place this issue received in Costanza's, (1989) seminal article in the first issue of the journal Ecological Economics. Many ecological economists have continued this theme ( Peet, 1992, Ayres, 1994, Khanna and Zilberman, 1997, Aldy et al., 1998, Davison, 2001, Huesemann, 2001 and White, 2002). The debate on the impacts of technology is not limited to ecological economic literature. Indeed, the concerns over the use and development of technology can be traced back to ancient cultural myths. A recurring theme in the myths of many cultures warns of the god's displeasure and the catastrophes that await at the hubris of humankind attempting to attain the glory, knowledge and power of the gods. For example, for eating from the Tree of Knowledge, Yahweh cast Adam and Eve from the Garden of Eden and cursed all their descendants with original sin. The myth of Prometheus and Pandora is an allegorical warning in a similar vein. The Titan, Prometheus, favoured humans over the Olympian gods. Prometheus was tutored by Athene in the technical arts of architecture, astronomy, mathematics, navigation, medicine and metallurgy. He pitied humans, ignorant of arts and science, and subject to the whims of merciless nature. To ease their lot, Prometheus stole fire from the gods and gave it to humanity. Control of fire symbolises power over nature, the beginning of technology, science and art. With control of fire, humanity began its journey to the heavens, taking its first steps towards attaining godlike power over nature. Zeus, infuriated by this theft, was incensed by humanity's increasing power over nature. In revenge, Zeus meted out punishments to both Prometheus and humanity. Prometheus was bound by indestructible chains to Mount Caucasus. Each day a monstrous eagle fed upon his liver. Each night his immortal liver grew back, to be devoured again the next day. Unrepentant, he endured his torment for thirty thousand years before Zeus finally allowed Hercules to slay the eagle and free him. Eventually forgiven, Prometheus, the benefactor of humanity, took his place on Olympus amongst the immortal gods. As for humans, Zeus ensured that the gift of fire was accompanied by calamity. From clay he fashioned the first woman, Pandora, a female of great beauty, though in her heart lay perfidy and from her mouth sprung deceit. Zeus made Pandora the keeper of a great jar within which was imprisoned Evil, Sickness, Old Age, Insanity, Vice, Passion and all the other Spites that plague humanity. Then he gave Pandora to Prometheus' brother, Epimetheus. Despite being warned by Prometheus not to accept gifts from Zeus, Epimetheus married Pandora. Once amongst the human race, she opened her jar releasing the Spites (Goldhill, 1993). Can ancient myths have meaning for 21st century humans? After all, to most of us, Prometheus and Pandora have no greater ontological substance than Father Christmas or the Tooth Fairy. Carl Jung claimed that the power of myth lay in the fact that the characters represent primal archetypes of human nature (Jung, 1964). Joseph Campbell considered myths to be the “dictionary of the language of the soul”, not to be read literally, but understood as psychic metaphors, revelatory of universal axioms of human nature (Campbell, 1988). Prometheus and Pandora are not to be understood as gods external, but rather as primal elements existing within the brow and heart of all humans. The myth points to the potential good and bad consequences of human manipulation of the power of nature. The myth of Prometheus and Pandora is perhaps even more relevant to modern humans than to the ancient Greeks. For in the 21st century, our technologies knock at the gates of heaven. We manipulate space, time, matter, energy and even life itself. Through technology, we would become as gods. Levi-Strauss claimed that myths raise as many questions as they answer (Willis, 1993). The myth of Prometheus and Pandora raises pertinent questions for modern humans: what will humanity do with the technological might of the gods? Will our use of technology lead to Utopia or Dystopia? We have the knowledge to harness and manipulate the forces of nature, but do we have the wisdom necessary to do so in an ecologically and socially sustainable manner? Modern myths, such as the economic myths of sustainable growth and perfect markets, may similarly reveal more about deep seated human psychological characteristics than reflect accurate descriptions of social and physical reality. In order to address these questions, we begin by investigating the relationship between humanity's cultural and social evolution, technology and nature. We then proceed to unpack the issues surrounding the social and environmental impacts of technology. Finally, we consider implications of the analysis for ecological economics and the ethics and social structure of society.