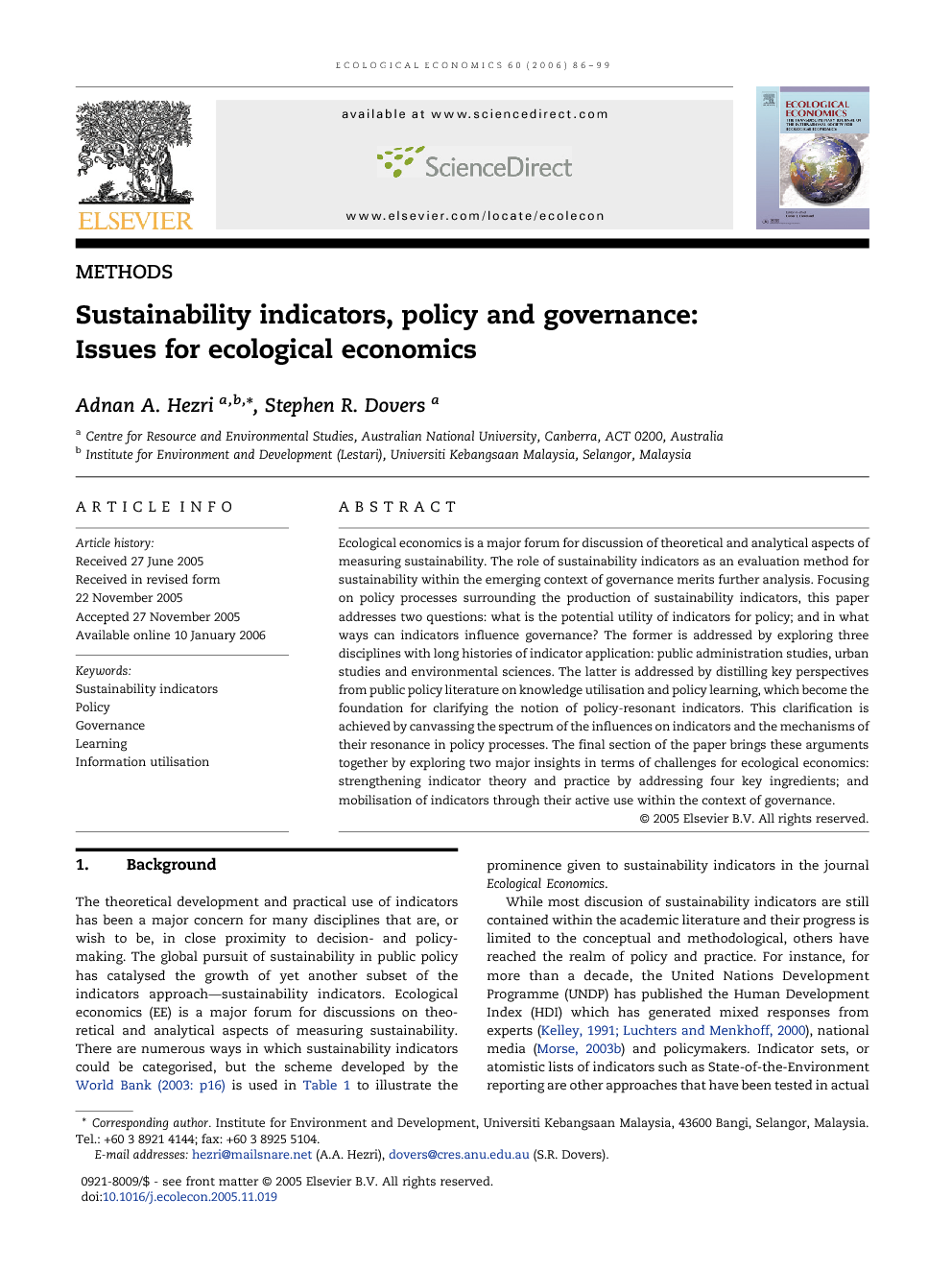 Ecological economics is a major forum for discussion of theoretical and analytical aspects of measuring sustainability. The role of sustainability indicators as an evaluation method for sustainability within the emerging context of governance merits further analysis. Focusing on policy processes surrounding the production of sustainability indicators, this paper addresses two questions: what is the potential utility of indicators for policy; and in what ways can indicators influence governance? The former is addressed by exploring three disciplines with long histories of indicator application: public administration studies, urban studies and environmental sciences. The latter is addressed by distilling key perspectives from public policy literature on knowledge utilisation and policy learning, which become the foundation for clarifying the notion of policy-resonant indicators. This clarification is achieved by canvassing the spectrum of the influences on indicators and the mechanisms of their resonance in policy processes. The final section of the paper brings these arguments together by exploring two major insights in terms of challenges for ecological economics: strengthening indicator theory and practice by addressing four key ingredients; and mobilisation of indicators through their active use within the context of governance.

The theoretical development and practical use of indicators has been a major concern for many disciplines that are, or wish to be, in close proximity to decision- and policy-making. The global pursuit of sustainability in public policy has catalysed the growth of yet another subset of the indicators approach—sustainability indicators. Ecological economics (EE) is a major forum for discussions on theoretical and analytical aspects of measuring sustainability. There are numerous ways in which sustainability indicators could be categorised, but the scheme developed by the World Bank (2003: p16) is used in Table 1 to illustrate the prominence given to sustainability indicators in the journal Ecological Economics.While most discusion of sustainability indicators are still contained within the academic literature and their progress is limited to the conceptual and methodological, others have reached the realm of policy and practice. For instance, for more than a decade, the United Nations Development Programme (UNDP) has published the Human Development Index (HDI) which has generated mixed responses from experts (Kelley, 1991 and Luchters and Menkhoff, 2000), national media (Morse, 2003b) and policymakers. Indicator sets, or atomistic lists of indicators such as State-of-the-Environment reporting are other approaches that have been tested in actual policy processes (Parris and Kates, 2003 and Selman, 1994), often supported with institutional and policy arrangements such as cross-jurisdictional committees and councils or units within bureaux. As a field of study, EE aspires not to limit its scope to scholarly enquiry, but more importantly to debate and propel social change toward sustainable development. In the inaugural issue of Ecological Economics, Proops (1989: 70–72) singled out ‘measurement and policy’ as one of three major problem areas for EE. Central to this problem is the question of how to judge the effectiveness of policies. Also stressed was the importance of influencing decision makers as an aim of this field (ibid: 63). Prescriptions for preparing EE as the new political language of governance are numerous. Viederman (1994), for instance, contends that EE needs to become ‘the knowledge base’ for the new politics. One way of achieving this is to sharpen the ‘external rhetoric’ of EE through orientation toward post-normal science approaches (Luks, 1998). It was also envisaged that ecological economists would be influential once they occupied powerful advisory positions analogous to the ascendancy of neo-classical economists to the corridors of power (Proops, 1989). However, there is little evidence thus far indicating a paradigm change (see Foster-Carter, 1976) in the direction of these prescriptions. The aspiration to be policy-relevant points to the need of embedding the knowledge on sustainability further into the fabric of decision-making. By virtue of their inherent pragmatism to be policy relevant, indicator systems (as a key area in EE), may function as strategic instruments to influence policy change. This would require a deeper understanding of the behaviour of information in policy systems—focusing on the Baconian dictum of ‘knowledge as power’. Comprehending the social basis of indicator development calls for a detailed understanding of policy processes. Save for a few recent works (Hezri and Hasan, 2004, Innes and Booher, 2000 and Rydin et al., 2003), existing scholarship on sustainability indicators lacks a clear articulation of its nature as a tool of politics. Aiming to fill the lacuna, this paper focuses on two interrelated questions: (i) what is the potential utility of indicators in policy processes? and (ii) how can indicators influence governance? The paper proceeds in four stages. Section 2 focuses on the demands of ‘governance’, entailing multiple actors in policy systems, rather than on conventional, narrow notions of ‘government’: governance better captures the nature of challenges in sustainability policy. Section 3 examines major characteristics of related disciplines that have shaped the theory and practice of indicators. In understanding the utility of indicators in policy processes, it is instructive to learn from disciplines with a longer history of indicator application such as public administration studies, urban studies, and the environmental sciences. Section 4 delves into the notion of policy-resonant indicators by canvassing the possible spectrum of indicator influence on public policy. Finally, Section 5 brings these arguments together by exploring the implications for indicator systems provided by EE.