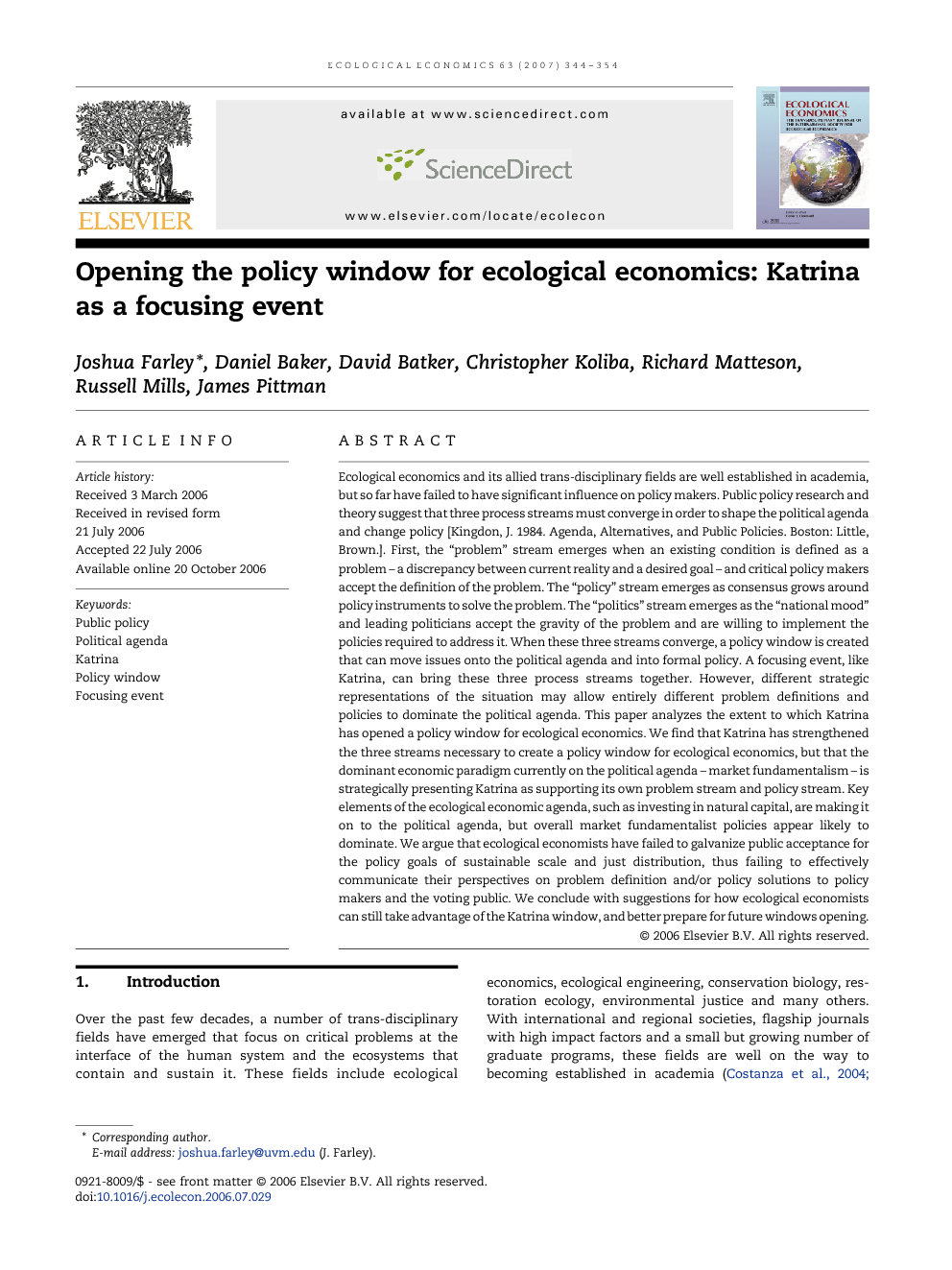 Ecological economics and its allied trans-disciplinary fields are well established in academia, but so far have failed to have significant influence on policy makers. Public policy research and theory suggest that three process streams must converge in order to shape the political agenda and change policy [Kingdon, J. 1984. Agenda, Alternatives, and Public Policies. Boston: Little, Brown.]. First, the “problem” stream emerges when an existing condition is defined as a problem – a discrepancy between current reality and a desired goal – and critical policy makers accept the definition of the problem. The “policy” stream emerges as consensus grows around policy instruments to solve the problem. The “politics” stream emerges as the “national mood” and leading politicians accept the gravity of the problem and are willing to implement the policies required to address it. When these three streams converge, a policy window is created that can move issues onto the political agenda and into formal policy. A focusing event, like Katrina, can bring these three process streams together. However, different strategic representations of the situation may allow entirely different problem definitions and policies to dominate the political agenda. This paper analyzes the extent to which Katrina has opened a policy window for ecological economics. We find that Katrina has strengthened the three streams necessary to create a policy window for ecological economics, but that the dominant economic paradigm currently on the political agenda – market fundamentalism – is strategically presenting Katrina as supporting its own problem stream and policy stream. Key elements of the ecological economic agenda, such as investing in natural capital, are making it on to the political agenda, but overall market fundamentalist policies appear likely to dominate. We argue that ecological economists have failed to galvanize public acceptance for the policy goals of sustainable scale and just distribution, thus failing to effectively communicate their perspectives on problem definition and/or policy solutions to policy makers and the voting public. We conclude with suggestions for how ecological economists can still take advantage of the Katrina window, and better prepare for future windows opening.

Over the past few decades, a number of trans-disciplinary fields have emerged that focus on critical problems at the interface of the human system and the ecosystems that contain and sustain it. These fields include ecological economics, ecological engineering, conservation biology, restoration ecology, environmental justice and many others. With international and regional societies, flagship journals with high impact factors and a small but growing number of graduate programs, these fields are well on the way to becoming established in academia (Costanza et al., 2004, Mitsch and Jorgensen, 2003 and Solomon, 2005). This fact is of little comfort however if we fail to move our public policies onto the political agenda and eventually see them implemented, which ultimately will require the cooperation and collaboration of political decision makers. These fields have thus far failed to cross the institutional threshold between academia and politics in a meaningful way, and we thus risk irrelevance on a very important level: the polis. How can we make ecological economics and its allies politically relevant? How can we convince the general public and the decision makers that we have the correct diagnosis for pressing problems and the correct policy options to resolve them? How can we move these policy options onto the political agenda? Is the answer to continually refine our science, develop better policies, and prove to decision makers that ecological economics is the most rational alternative? This approach alone is inadequate. Policy makers do not rationally evaluate policy proposals to meet predetermined goals and objectively choose the best alternative. Politics is about the strategic representation of problems and policies in a way that brings together coalitions and alliances needed to move them on to the policy agenda. Politics is often more about emotion, metaphor, story telling and party loyalty than reason and objective facts (Stone, 2002). The concept of policy windows is well supported by and builds upon conclusions from social psychology, evolutionary biology and policy theory. Since the 1950's action research and change management pioneers have described social systems as generally resistant to change with cycles of unfreezing–moving–refreezing wherein the status quo is interrupted by new information that changes attitudes, values, feelings, behaviors and policy structures (Lewin, 1951). Modern researchers have used a similar model of punctuated equilibrium to emphasize that incremental change in social systems is interrupted by periodic accelerations of deep structural change (Wollin, 1999), as can be specifically seen through trends in public agenda and policy change in American politics (Baumgartner and Jones, 1993). In a new era of public policy theory (John, 2003), Kingdon's precedent concept of “policy windows" offers insight into when, why and how such periodic change occurs. In particular, catastrophes have provided the emotional leverage necessary to force fundamental policy changes, serving as “focusing events” that create policy windows (Kingdon, 1984). As is the case with most natural disasters and other catastrophes, Hurricane Katrina was an event that suddenly punctuated social and political attention; what is not yet clear is how deeply this punctuation will sink into appropriate policy responses. This article explores the potential for Katrina to serve as a focusing event that could open a policy window for ecological economics and its natural allies: though hereafter we refer primarily to ecological economics, we believe our insights are equally relevant to all the emerging trans-disciplines mentioned in this introduction, and that we are only likely to achieve our goals working together. The first section will focus on what generally creates policy windows. The second section will describe how catastrophes in the past have opened such windows, while the third and fourth sections will briefly summarize the ecological economists' definition of the problems illuminated by Katrina as well as their policy solutions, contrasted with the problem definition and policies currently dominating the political agenda. We refer to the philosophy behind this dominant set of problem definitions and policies as market fundamentalism — the belief that that markets and the private sector almost always allocate resources more effectively than the public sector (regardless of the physical characteristics of the resources), that virtually all goods have adequate substitutes, and that the market system provides the best incentives for developing those substitutes. The fifth section will explain why the market fundamentalists have been able to take advantage of the policy window created by Katrina and suggest what ecological economists might still do before this window slams shut. The article concludes with suggestions for how ecological economists can move their policies onto the political agenda in the future in light of a growing number of ecological catastrophes.

Ecological economics and its allied trans-disciplinary fields are too important to remain cloistered in academia. There is growing scientific evidence that we are exceeding sustainable scale, which will force us to pay greater attention to just distribution and the efficient allocation of investments across natural, social, human and built capitals. The irreversible outcomes that may occur when we cross critical ecological thresholds mean that we must be proactive in pushing our policies, not reactive. We have honed our problem definitions and policies, but have so far failed to create the political stream necessary to move them on to the political agenda. Coastal catastrophes not only serve as exceptionally good examples of the explanatory power of our paradigm, and its superiority to market fundamentalism as a means of increasing human quality of life for this and future generations, but also focus public attention. We must take advantage of the policy windows created by these and other minor catastrophes before we face cataclysmic catastrophes on a global scale. To achieve this, we must draw on insights from the field of public policy to learn how to open policy windows. To strengthen acceptance of our problem definitions, we need more support for our goals, which requires a positive, shared vision of the sustainable and desirable future our policies would create. We need to convey that vision through the language of literature and poetry, but back it up with solid objective science. We must become trans-institutional as well as trans-disciplinary, working with think tanks, social movements, NGOs, the media and policy makers. We must create the political stream that will carry our ideas onto the political agenda, locally, nationally and globally. Ecological economics and the other emerging trans-disciplinary fields discussed here are ideally suited to meet these challenges. We already pride ourselves on being trans-disciplinary problem solvers who integrate ideas and methodologies from any field as required to address a given problem (Norgaard, 1997, Costanza et al., 1997a and Costanza et al., 1997b). The field of public policy provides important insights into solving the big problem of extending our paradigm shift to politics, and to do so we must become trans-institutional as well as trans-disciplinary.