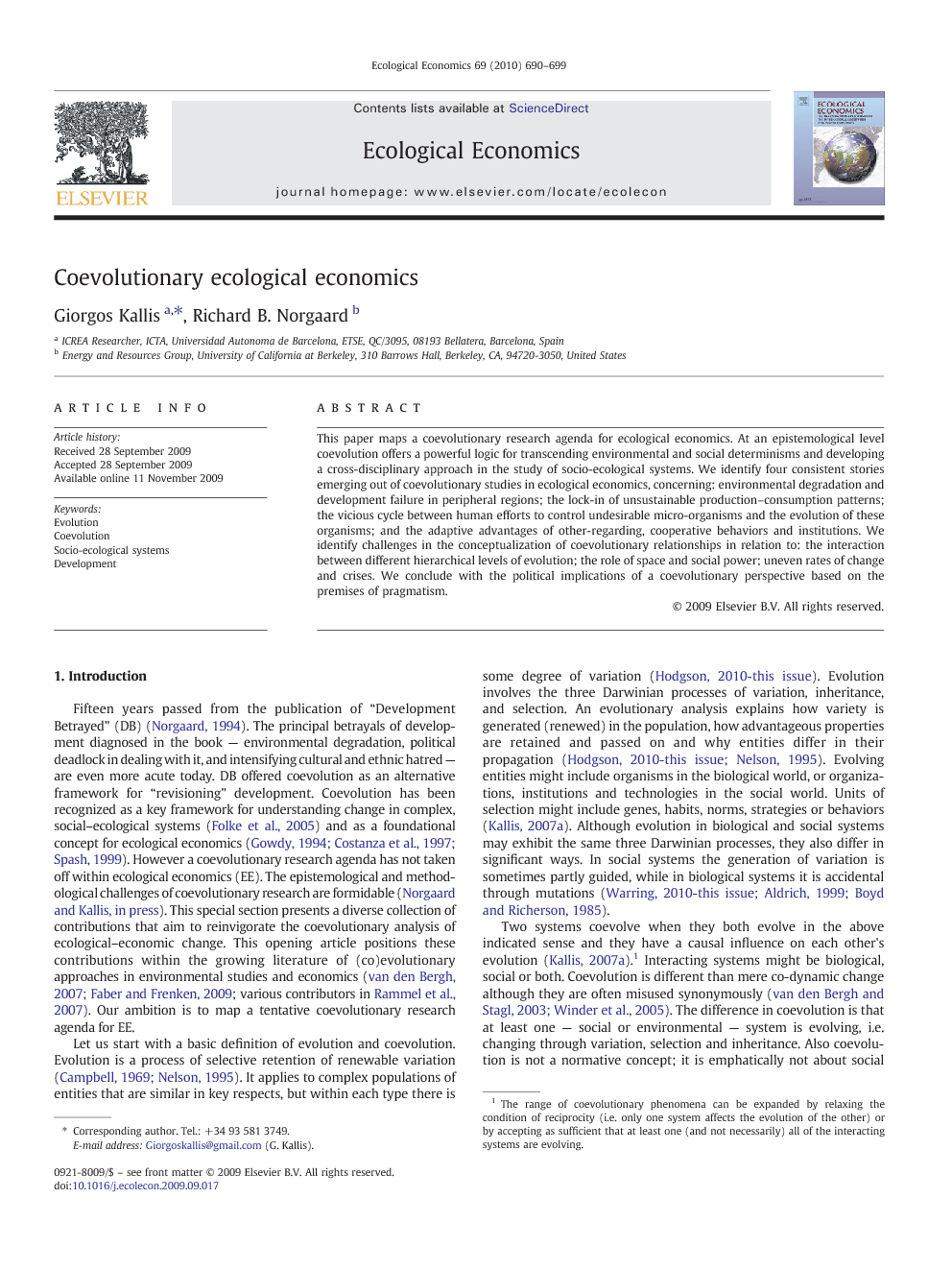 This paper maps a coevolutionary research agenda for ecological economics. At an epistemological level coevolution offers a powerful logic for transcending environmental and social determinisms and developing a cross-disciplinary approach in the study of socio-ecological systems. We identify four consistent stories emerging out of coevolutionary studies in ecological economics, concerning: environmental degradation and development failure in peripheral regions; the lock-in of unsustainable production–consumption patterns; the vicious cycle between human efforts to control undesirable micro-organisms and the evolution of these organisms; and the adaptive advantages of other-regarding, cooperative behaviors and institutions. We identify challenges in the conceptualization of coevolutionary relationships in relation to: the interaction between different hierarchical levels of evolution; the role of space and social power; uneven rates of change and crises. We conclude with the political implications of a coevolutionary perspective based on the premises of pragmatism.

Fifteen years passed from the publication of “Development Betrayed” (DB) (Norgaard, 1994). The principal betrayals of development diagnosed in the book — environmental degradation, political deadlock in dealing with it, and intensifying cultural and ethnic hatred — are even more acute today. DB offered coevolution as an alternative framework for “revisioning” development. Coevolution has been recognized as a key framework for understanding change in complex, social–ecological systems (Folke et al., 2005) and as a foundational concept for ecological economics (Gowdy, 1994, Costanza et al., 1997 and Spash, 1999). However a coevolutionary research agenda has not taken off within ecological economics (EE). The epistemological and methodological challenges of coevolutionary research are formidable (Norgaard and Kallis, in press). This special section presents a diverse collection of contributions that aim to reinvigorate the coevolutionary analysis of ecological–economic change. This opening article positions these contributions within the growing literature of (co)evolutionary approaches in environmental studies and economics (van den Bergh, 2007 and Faber and Frenken, 2009; various contributors in Rammel et al., 2007). Our ambition is to map a tentative coevolutionary research agenda for EE. Let us start with a basic definition of evolution and coevolution. Evolution is a process of selective retention of renewable variation (Campbell, 1969 and Nelson, 1995). It applies to complex populations of entities that are similar in key respects, but within each type there is some degree of variation (Hodgson, 2010-this issue). Evolution involves the three Darwinian processes of variation, inheritance, and selection. An evolutionary analysis explains how variety is generated (renewed) in the population, how advantageous properties are retained and passed on and why entities differ in their propagation (Hodgson, 2009-this issue and Nelson, 1995). Evolving entities might include organisms in the biological world, or organizations, institutions and technologies in the social world. Units of selection might include genes, habits, norms, strategies or behaviors (Kallis, 2007a). Although evolution in biological and social systems may exhibit the same three Darwinian processes, they also differ in significant ways. In social systems the generation of variation is sometimes partly guided, while in biological systems it is accidental through mutations (Warring, 2010-this issue, Aldrich, 1999 and Boyd and Richerson, 1985). Two systems coevolve when they both evolve in the above indicated sense and they have a causal influence on each other's evolution (Kallis, 2007a).1 Interacting systems might be biological, social or both. Coevolution is different than mere co-dynamic change although they are often misused synonymously (van den Bergh and Stagl, 2003 and Winder et al., 2005). The difference in coevolution is that at least one — social or environmental — system is evolving, i.e. changing through variation, selection and inheritance. Also coevolution is not a normative concept; it is emphatically not about social systems changing in harmony with nature as Thiele, 1999 and Conrad and Salas, 1993, mean it. Coevolutionary relationships can be mutually cooperative, but also competitive parasitic, predatory or dominative. Coevolution is a value-free process of change (Norgaard, 1994). Norgaard (1984) proposes instead to use the term coevolutionary development for coevolution between society and nature that is valued as beneficial by humans. Coevolution is all-pervasive. For example, as the environment of one species consists of multiple other species, coevolutionary relations characterize almost all of what normally passes as evolution in biology. Biologists find useful methodologically the distinction between “direct” — clearly defined and documented, species-to-species — coevolution and more widespread, “diffuse” coevolution (Futuyma and Slatkin, 1983). Many of the systems that matter in the social and natural worlds, such as institutions, technologies, beliefs, values, genes, human and animal behaviors, are evolving diffusedly affecting the evolution of each other (Norgaard, 1994). Rather than debating whether a focus on direct or diffuse coevolution makes more sense for EE (see debate between Winder et al. (2005), Norgaard (2005), and Winder (2005)), a more productive approach is to recognize that each has something to offer (Kallis, 2007b). A generalized “coevolutionary logic” (Porter, 2006) of diffused evolving interdependence offers a good basis for a new epistemology or “cosmology” as Norgaard (1994) put it. On the other hand for formal theorizing (Nelson, 1995) and the development of an empirical research program focus has to shift to direct “coevolutionary mechanisms” (Porter, 2006). An understanding that “everything” might be coevolving with everything else needs to be complemented with the identification of what is coevolving with what and how in specific conditions or contexts and as relevant to specific analytical and policy purposes (Malerba, 2006, Kallis, 2007b and Norgaard and Kallis, in press). The next two sections revisit the material of DB under this perspective. Section 2 clarifies the different types of coevolutionary mechanisms that are relevant for empirical EE research. Section 3 shows how these mechanisms put together suggest a broader coevolutionary logic, and illustrates the power of this logic to transcend mal-adaptive epistemological dichotomies that confound EE and environmental studies in general. Section 4 synthesizes recent coevolutionary contributions, including those in this special section, into four key theses. Each of these relies on an eclectic combination of coevolution with other theories and analytical tools, as relevant to the specific application and domain of study. Section 5 identifies challenging research questions in coevolutionary studies. Section 6 engages with broader normative and epistemological issues and concludes with the contribution of coevolution to policy.