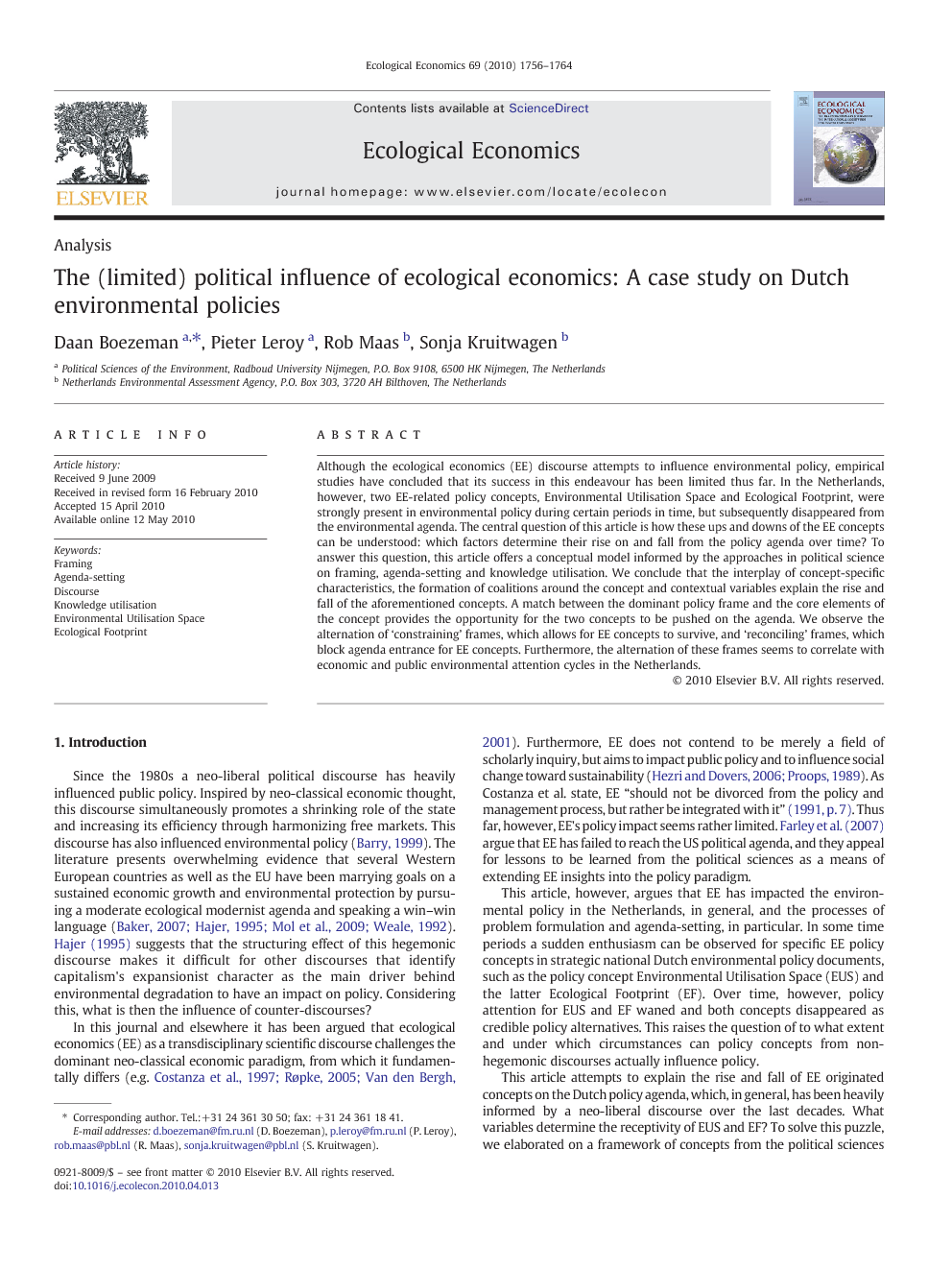 Although the ecological economics (EE) discourse attempts to influence environmental policy, empirical studies have concluded that its success in this endeavour has been limited thus far. In the Netherlands, however, two EE-related policy concepts, Environmental Utilisation Space and Ecological Footprint, were strongly present in environmental policy during certain periods in time, but subsequently disappeared from the environmental agenda. The central question of this article is how these ups and downs of the EE concepts can be understood: which factors determine their rise on and fall from the policy agenda over time? To answer this question, this article offers a conceptual model informed by the approaches in political science on framing, agenda-setting and knowledge utilisation. We conclude that the interplay of concept-specific characteristics, the formation of coalitions around the concept and contextual variables explain the rise and fall of the aforementioned concepts. A match between the dominant policy frame and the core elements of the concept provides the opportunity for the two concepts to be pushed on the agenda. We observe the alternation of ‘constraining’ frames, which allows for EE concepts to survive, and ‘reconciling’ frames, which block agenda entrance for EE concepts. Furthermore, the alternation of these frames seems to correlate with economic and public environmental attention cycles in the Netherlands

Since the 1980s a neo-liberal political discourse has heavily influenced public policy. Inspired by neo-classical economic thought, this discourse simultaneously promotes a shrinking role of the state and increasing its efficiency through harmonizing free markets. This discourse has also influenced environmental policy (Barry, 1999). The literature presents overwhelming evidence that several Western European countries as well as the EU have been marrying goals on a sustained economic growth and environmental protection by pursuing a moderate ecological modernist agenda and speaking a win–win language (Baker, 2007, Hajer, 1995, Mol et al., 2009 and Weale, 1992). Hajer (1995) suggests that the structuring effect of this hegemonic discourse makes it difficult for other discourses that identify capitalism's expansionist character as the main driver behind environmental degradation to have an impact on policy. Considering this, what is then the influence of counter-discourses? In this journal and elsewhere it has been argued that ecological economics (EE) as a transdisciplinary scientific discourse challenges the dominant neo-classical economic paradigm, from which it fundamentally differs (e.g. Costanza et al., 1997, Røpke, 2005 and Van den Bergh, 2001). Furthermore, EE does not contend to be merely a field of scholarly inquiry, but aims to impact public policy and to influence social change toward sustainability (Hezri and Dovers, 2006 and Proops, 1989). As Costanza et al. state, EE “should not be divorced from the policy and management process, but rather be integrated with it” (1991, p. 7). Thus far, however, EE's policy impact seems rather limited. Farley et al. (2007) argue that EE has failed to reach the US political agenda, and they appeal for lessons to be learned from the political sciences as a means of extending EE insights into the policy paradigm. This article, however, argues that EE has impacted the environmental policy in the Netherlands, in general, and the processes of problem formulation and agenda-setting, in particular. In some time periods a sudden enthusiasm can be observed for specific EE policy concepts in strategic national Dutch environmental policy documents, such as the policy concept Environmental Utilisation Space (EUS) and the latter Ecological Footprint (EF). Over time, however, policy attention for EUS and EF waned and both concepts disappeared as credible policy alternatives. This raises the question of to what extent and under which circumstances can policy concepts from non-hegemonic discourses actually influence policy. This article attempts to explain the rise and fall of EE originated concepts on the Dutch policy agenda, which, in general, has been heavily informed by a neo-liberal discourse over the last decades. What variables determine the receptivity of EUS and EF? To solve this puzzle, we elaborated on a framework of concepts from the political sciences literature on agenda-setting, on policy frames and on knowledge utilisation. This article proceeds as follows. Section 2 presents the conceptual framework, Section 3 accounts for the methodology, and Section 4 discusses the theoretical backgrounds of the policy concepts concerned. Section 5 sketches how Dutch environmental policy discourses have evolved. The discourses form the background and context of the agenda-setting processes around EUS and EF that are discussed in Section 6. Section 7 concludes and poses questions for future research.

This article aimed (a) at illustrating how EE-originating concepts have or have had prominent, albeit temporary places on the Dutch environmental policy agenda and (b) at understanding the rise and fall of two EE-originating concepts on that agenda. Three conclusions can be drawn from the analysis. First, the interplay of three groups of variables explains the rise and fall of the concepts considered. Issue-specific factors, notably rhetoric and metaphoric qualities, improve the concept's chances of being adopted. Agency matters. The formation of a coalition around the concept or the strategic use of the concept by an established coalition, are important for the concept's popularisation and successful advocating. The recruitment and engagement of well reputed scientists adds credibility to the coalition, while the recruitment of key politicians and high bureaucrats improves the chances for the access onto the agenda. Contextual factors, though, provide an opportunity for EE concepts to be pushed on the agenda in the first place. A necessary but not sufficient condition seems to be the ‘match’ between the core elements of the policy concept and the then dominant policy frame, in all three of its layers. In turn, major changes in the contextual variables and the rise of a different frame tend to push EE concepts off the agenda. Rival coalitions can succeed in undermining the concept's credibility. Additionally, issue-specific problems in operationalising a concept add to its decline. Our findings match the patterns found in other studies on the rise and fall of policy concepts in the Netherlands (Turnhout et al., 2007). Second, ‘constraining’ frames are alternated by ‘reconciling’ frames in the Netherlands. Relating to this article's main question, ‘constraining’ policy frames offer a discursive space for EE concepts to survive and to be advocated as credible policy alternatives. ‘Reconciling’ policy frames block the entrance of EE concepts to or may push them off the agenda. Nevertheless, EE-related ideas remain latent in the policy stream and may be reframed and pushed back onto the agenda when a new window of opportunity opens. This was the case with EUS: although it disappeared as a credible option at a certain moment, years later the central elements of EUS reappeared on the agenda in the form of EF. Third, for the Netherlands, the alternation of frames seems to correlate with economic cycles and with public attention for environmental problems. In bad economic periods with low attention for environmental issues, frames arise that emphasise mutual reinforcement of economic and environmental goals: the ‘reconciling’ frames. After a period of economic boom and high public awareness, policy frames can emerge that hammer on strict reduction of environmental pressure: the ‘constraining’ frames. This article has focused on the predominant environmental policy discourses as they are represented and reflected in strategic policy. Future research could focus on whether these policy concepts, originating from whatever paradigm, also settle into policy indicators and instruments – and their actual use –, and in institutional arrangements. The question also arises to what extent these alternating frames and concepts influence the environmental research agenda and vice versa. While our conclusions are limited to the Dutch case, a cross-national comparison of predominant paradigms and concepts would be interesting to see whether our insights can be generalised to other contexts. The same holds true for the question of whether pattern of frame alternation, and the mechanisms behind it, can also be observed in other countries. Finally, it would be interesting to look for the successful agenda-setting of concepts and which core elements mismatch the then dominant core beliefs, as the latter would provide insight into the relative importance of specific variables in agenda-setting processes. Finding disconfirming evidence may further sharpen our insights into the agenda-setting processes.