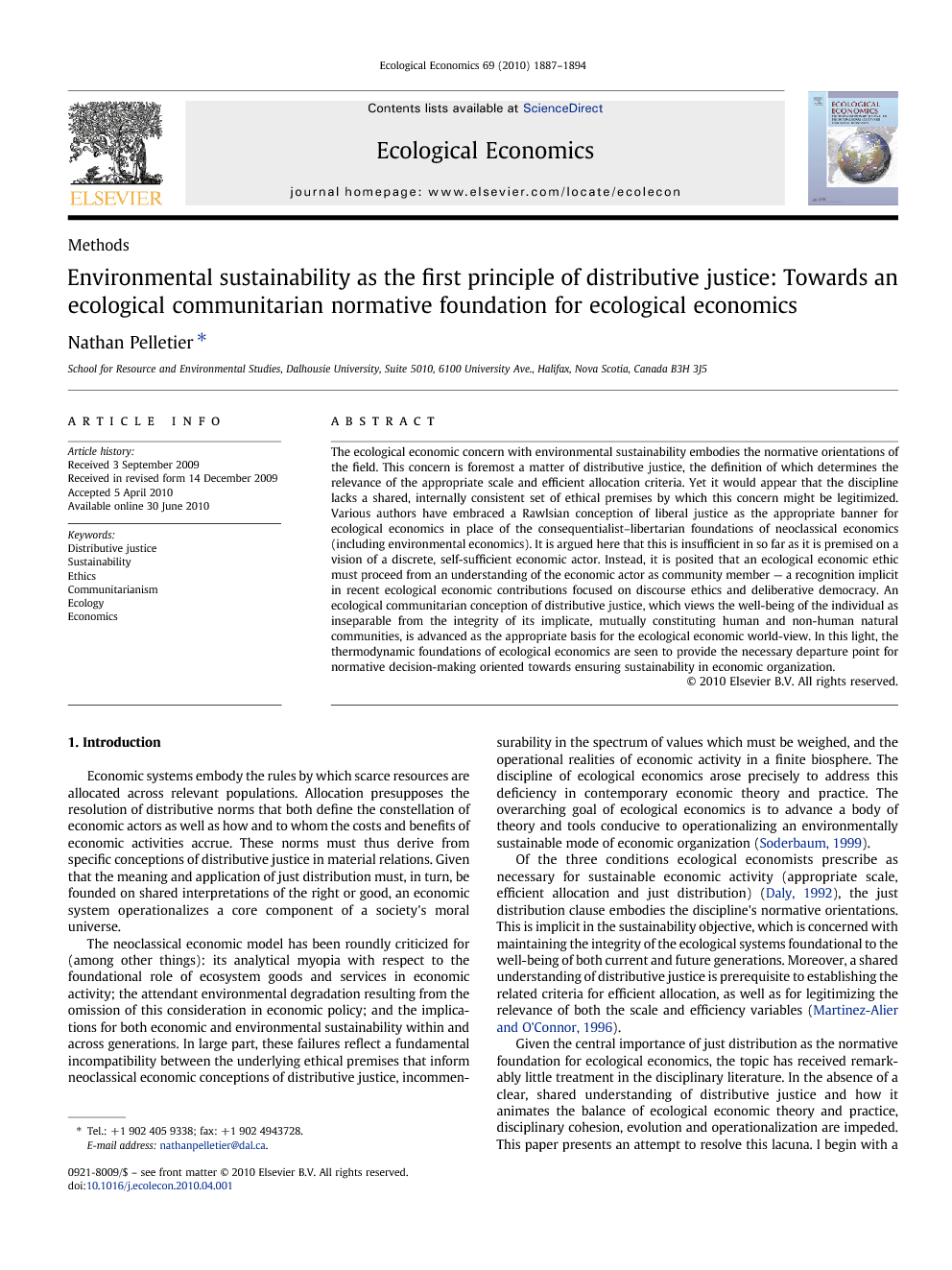 The ecological economic concern with environmental sustainability embodies the normative orientations of the field. This concern is foremost a matter of distributive justice, the definition of which determines the relevance of the appropriate scale and efficient allocation criteria. Yet it would appear that the discipline lacks a shared, internally consistent set of ethical premises by which this concern might be legitimized. Various authors have embraced a Rawlsian conception of liberal justice as the appropriate banner for ecological economics in place of the consequentialist–libertarian foundations of neoclassical economics (including environmental economics). It is argued here that this is insufficient in so far as it is premised on a vision of a discrete, self-sufficient economic actor. Instead, it is posited that an ecological economic ethic must proceed from an understanding of the economic actor as community member — a recognition implicit in recent ecological economic contributions focused on discourse ethics and deliberative democracy. An ecological communitarian conception of distributive justice, which views the well-being of the individual as inseparable from the integrity of its implicate, mutually constituting human and non-human natural communities, is advanced as the appropriate basis for the ecological economic world-view. In this light, the thermodynamic foundations of ecological economics are seen to provide the necessary departure point for normative decision-making oriented towards ensuring sustainability in economic organization.

Economic systems embody the rules by which scarce resources are allocated across relevant populations. Allocation presupposes the resolution of distributive norms that both define the constellation of economic actors as well as how and to whom the costs and benefits of economic activities accrue. These norms must thus derive from specific conceptions of distributive justice in material relations. Given that the meaning and application of just distribution must, in turn, be founded on shared interpretations of the right or good, an economic system operationalizes a core component of a society's moral universe. The neoclassical economic model has been roundly criticized for (among other things): its analytical myopia with respect to the foundational role of ecosystem goods and services in economic activity; the attendant environmental degradation resulting from the omission of this consideration in economic policy; and the implications for both economic and environmental sustainability within and across generations. In large part, these failures reflect a fundamental incompatibility between the underlying ethical premises that inform neoclassical economic conceptions of distributive justice, incommensurability in the spectrum of values which must be weighed, and the operational realities of economic activity in a finite biosphere. The discipline of ecological economics arose precisely to address this deficiency in contemporary economic theory and practice. The overarching goal of ecological economics is to advance a body of theory and tools conducive to operationalizing an environmentally sustainable mode of economic organization (Soderbaum, 1999). Of the three conditions ecological economists prescribe as necessary for sustainable economic activity (appropriate scale, efficient allocation and just distribution) (Daly, 1992), the just distribution clause embodies the discipline's normative orientations. This is implicit in the sustainability objective, which is concerned with maintaining the integrity of the ecological systems foundational to the well-being of both current and future generations. Moreover, a shared understanding of distributive justice is prerequisite to establishing the related criteria for efficient allocation, as well as for legitimizing the relevance of both the scale and efficiency variables (Martinez-Alier and O'Connor, 1996). Given the central importance of just distribution as the normative foundation for ecological economics, the topic has received remarkably little treatment in the disciplinary literature. In the absence of a clear, shared understanding of distributive justice and how it animates the balance of ecological economic theory and practice, disciplinary cohesion, evolution and operationalization are impeded. This paper presents an attempt to resolve this lacuna. I begin with a brief overview of the major conceptions of distributive justice, each of which is moored in a specific interpretation of the (deontological) right) or (consequentialist) good. I next review the normative dimensions of neoclassical economics, and compare and contrast these with the limited treatment of distributive justice in the ecological economics literature. I suggest that both are undermined by a fundamental misunderstanding of the nature of the individual. Turning to the core insights of ecology as a basis for the necessary reconception of the economic actor as ecological community member, I posit that an expanded ecological communitarianism, which views maintaining the integrity of the web of biotic and abiotic processes and communities that mutually constitute the biosphere as the first principle of distributive justice, offers the most appropriate departure point for ecological economics as a normative enterprise. In this light, the thermodynamic foundations of ecological economics are shown to provide the necessary reference point for normative decision making in economic organization.

What we conceive of as the great environmental crises of the modern era are, in fact, simply symptoms of a single pervasive crisis. This is the crisis of identity that plagues the western industrial social model — a model that is fast becoming the dominant mode of human civilization. The story of who we are in relation to one another and the myriad other beings and processes with whom we mutually constitute the conditions of life on earth is an evolutionary anachronism that has now become the single most destructive force in the history of life. This is the story of the atomistic self of Descartes, the self-centred, instrumental rationality of neoclassical economics, the skin-encapsulated ego of the western philosophical tradition. This is the story of a self-conscious social organism in the throes of a cultural delusion in which the individual is paramount and the sum of selfish desires expressed through consumer preference in the market place is thought to constitute a reasonable proxy for enlightened democracy. This is the story of the belief that all values have a price. It is the story of an economic system premised on unconstrained growth embedded in a finite, encompassing ecosystem. It is the story of the loss of community, and the evolutionary-adaptive checks and balances that successful community must create and encode in ethical norms to constrain, in dynamic tension, the predispositions of its constituents with respect to the biocapacity of its ecological milieu. This is a story that must be rewritten. Any economic discipline must provide an internally consistent account of economic activities and behaviours conducive to managing our economies in the interest of explicit, shared objectives. Neoclassical economics offers an internally consistent account, but one that is both morally bankrupt and unable to satisfactorily account for many of the most important dimensions of our activities — particularly with respect to the human and non-human natural communities and processes of which we are part. Ecological economics is well-positioned to provide a competing account which might resolve many of these deficiencies. Sustainability is, by nature, a community rather than an individual concern. The ecological economic ethical framework sketched in broad, preliminary strokes here, and its attendant ecological communitarian conception of distributive justice, provides a strong departure point for mediating human/nature relations in economic organization towards a plurality of objectives, regardless of how these are framed. However, it must be recognized that this position requires further development. Ecological communitarianism may well represent a viable alternative to the overemphasis of individualism which permeates conventional economics, but I have not developed, beyond the most basic of assertions, why is alternative is more legitimate nor how such an alternative might be operationalized. Certainly, within our current cultural context of hyper-individualism, charges of implicit authoritarianism might be anticipated. In short, there is a need here for on-going development of the epistemological and ontological foundations of ecological communitarianism. Moreover, this framework does not pretend to provide for the adjudication of all ethical dilemmas. Rather, it is primarily intended to serve the environmental sustainability objective, which is prerequisite to sustainability in any other sphere. As such, this vision of distributive justice should be seen as providing the baseline which circumscribes and constrains the range of choices that may be entertained by the economic actor and by society as a whole according to the overarching imperative of ecological community sustainability. Within this context, there is ample scope and, indeed, requirement, for a rich suite of ethical norms relevant within the intended frameworks of their applicability.