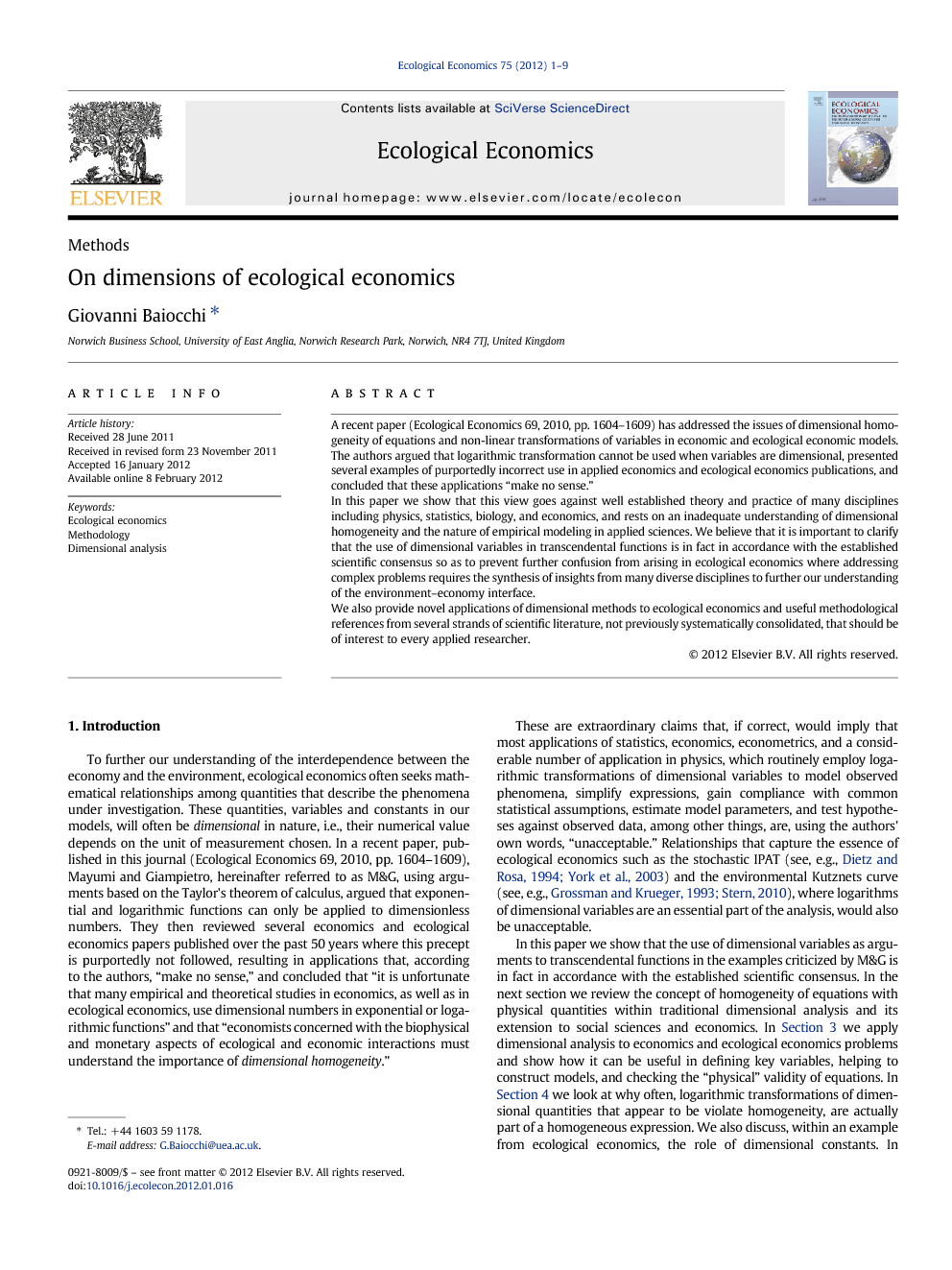 A recent paper (Ecological Economics 69, 2010, pp. 1604–1609) has addressed the issues of dimensional homogeneity of equations and non-linear transformations of variables in economic and ecological economic models. The authors argued that logarithmic transformation cannot be used when variables are dimensional, presented several examples of purportedly incorrect use in applied economics and ecological economics publications, and concluded that these applications “make no sense.” In this paper we show that this view goes against well established theory and practice of many disciplines including physics, statistics, biology, and economics, and rests on an inadequate understanding of dimensional homogeneity and the nature of empirical modeling in applied sciences. We believe that it is important to clarify that the use of dimensional variables in transcendental functions is in fact in accordance with the established scientific consensus so as to prevent further confusion from arising in ecological economics where addressing complex problems requires the synthesis of insights from many diverse disciplines to further our understanding of the environment–economy interface. We also provide novel applications of dimensional methods to ecological economics and useful methodological references from several strands of scientific literature, not previously systematically consolidated, that should be of interest to every applied researcher.

To further our understanding of the interdependence between the economy and the environment, ecological economics often seeks mathematical relationships among quantities that describe the phenomena under investigation. These quantities, variables and constants in our models, will often be dimensional in nature, i.e., their numerical value depends on the unit of measurement chosen. In a recent paper, published in this journal (Ecological Economics 69, 2010, pp. 1604–1609), Mayumi and Giampietro, hereinafter referred to as M&G, using arguments based on the Taylor's theorem of calculus, argued that exponential and logarithmic functions can only be applied to dimensionless numbers. They then reviewed several economics and ecological economics papers published over the past 50 years where this precept is purportedly not followed, resulting in applications that, according to the authors, “make no sense,” and concluded that “it is unfortunate that many empirical and theoretical studies in economics, as well as in ecological economics, use dimensional numbers in exponential or logarithmic functions” and that “economists concerned with the biophysical and monetary aspects of ecological and economic interactions must understand the importance of dimensional homogeneity.” These are extraordinary claims that, if correct, would imply that most applications of statistics, economics, econometrics, and a considerable number of application in physics, which routinely employ logarithmic transformations of dimensional variables to model observed phenomena, simplify expressions, gain compliance with common statistical assumptions, estimate model parameters, and test hypotheses against observed data, among other things, are, using the authors' own words, “unacceptable.” Relationships that capture the essence of ecological economics such as the stochastic IPAT (see, e.g., Dietz and Rosa, 1994 and York et al., 2003) and the environmental Kutznets curve (see, e.g., Grossman and Krueger, 1993 and Stern, 2010), where logarithms of dimensional variables are an essential part of the analysis, would also be unacceptable. In this paper we show that the use of dimensional variables as arguments to transcendental functions in the examples criticized by M&G is in fact in accordance with the established scientific consensus. In the next section we review the concept of homogeneity of equations with physical quantities within traditional dimensional analysis and its extension to social sciences and economics. In Section 3 we apply dimensional analysis to economics and ecological economics problems and show how it can be useful in defining key variables, helping to construct models, and checking the “physical” validity of equations. In Section 4 we look at why often, logarithmic transformations of dimensional quantities that appear to be violate homogeneity, are actually part of a homogeneous expression. We also discuss, within an example from ecological economics, the role of dimensional constants. In Section 5 we look at nonhomogeneous models and empirical equations, their usefulness, and their correct interpretation. We show that, because of the complexity of the environment economic interactions, it is a misuse of dimensional analysis to insist that homogeneity rules must be rigidly and uncritically applied. We conclude with Section 6. As M&G ignored the whole of the vast literature on dimensional analysis, we will try to amend this important omission, by providing useful references to a large body of literature scattered in various disciplines. The standard reference in dimensional analysis remains Bridgman (1931). Useful treatments of the topic include Langhaar (1951), Palacios (1964), de St. Q. Isaacson and de St. Q. Isaacson (1975), and Barenblatt (1996). For a historical account of the method see Macagno (1971) and Roche (1998). In economics, the earliest treatment is Jevons (1888). Several authors of economic books, acknowledging its importance, dedicate a chapter on dimensional analysis. They include Allen (1938), Shone (2002), and Neal and Shone (1976). The most authoritative exposition in the field of economics remains the book by De Jong (1967). Useful papers published on the subject in economics include De Jong and Kumar (1972) and Okishio (1982). Other, more specific references, will be provided in later sections.

In this paper we have shown how M&G's conclusions that many papers in economics and ecological economics have serious analytical errors are based on flawed logic, incorrect mathematical proofs, and on a misunderstanding of dimensional homogeneity and the nature of empirical models in applied sciences. If ecological economics wants to promote truly interdisciplinary research it “must go well beyond the fusion of ecology and economics alone. The complex problems of today require a correspondingly complex synthesis of insights and tools from the social sciences, natural sciences, and humanities” (Daly and Farley, 2004, p. xxii). To apply dimensional methods successfully to ecological economics, the traditional perspective of physics needs to be modified to acknowledge fundamental methodological differences in all the relevant contributing disciplines. The authors claim that their criticism is levied in the hope that it “will orient future quantitative analyses toward more constructive ends,” however their misguided and narrow application of the dimensional homogeneity principle would actually undermine applied and interdisciplinary research. It is clear that dimensional analysis has to be applied judiciously and requires considerable knowledge of the field of application. Results from nonhomogeneous models are not unacceptable. In fact, they can provide empirical models essential for prediction and decision-making and can be the precursors of future theoretical developments aimed at understanding the surrounding environment.