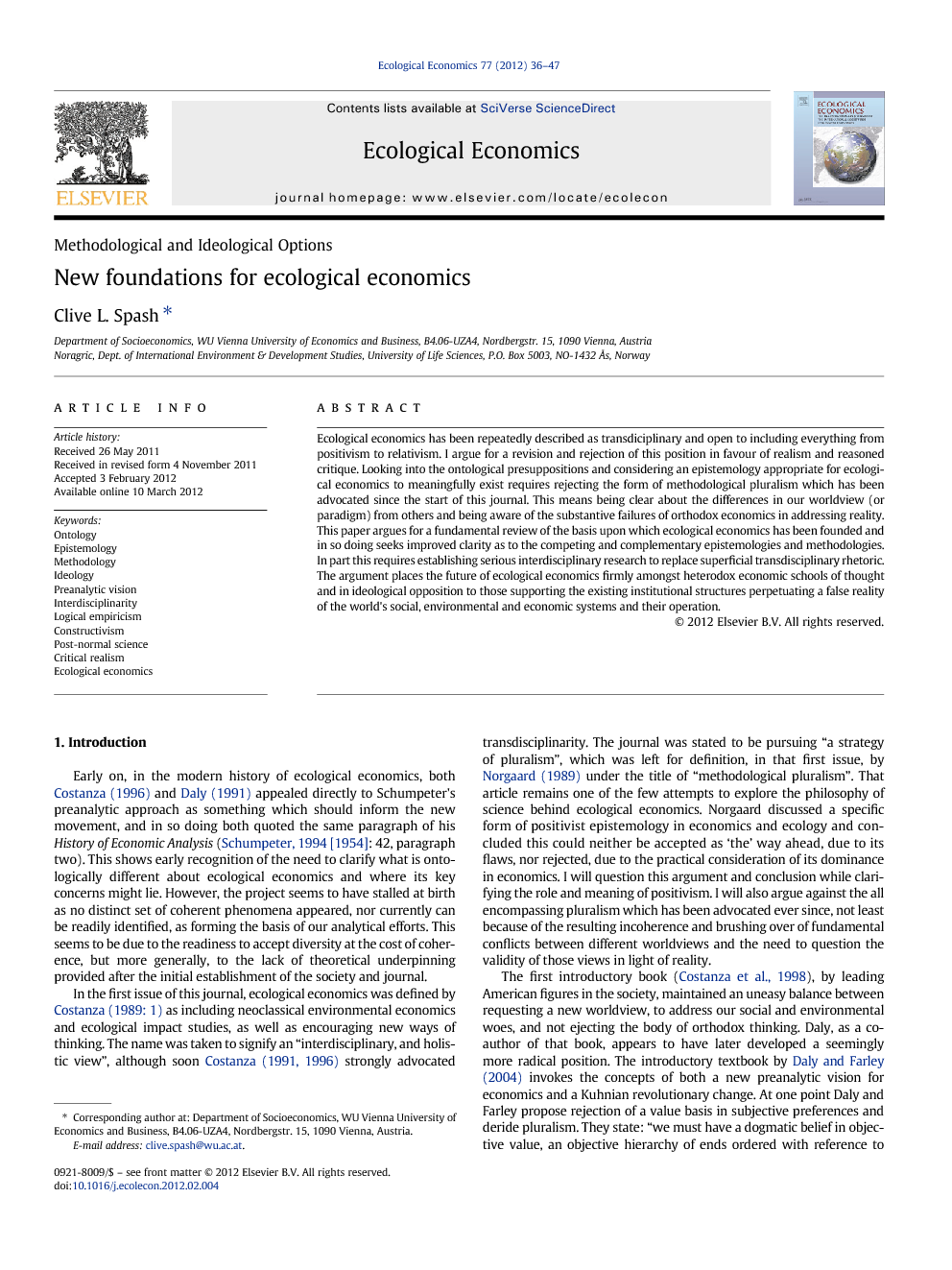 Ecological economics has been repeatedly described as transdiciplinary and open to including everything from positivism to relativism. I argue for a revision and rejection of this position in favour of realism and reasoned critique. Looking into the ontological presuppositions and considering an epistemology appropriate for ecological economics to meaningfully exist requires rejecting the form of methodological pluralism which has been advocated since the start of this journal. This means being clear about the differences in our worldview (or paradigm) from others and being aware of the substantive failures of orthodox economics in addressing reality. This paper argues for a fundamental review of the basis upon which ecological economics has been founded and in so doing seeks improved clarity as to the competing and complementary epistemologies and methodologies. In part this requires establishing serious interdisciplinary research to replace superficial transdisciplinary rhetoric. The argument places the future of ecological economics firmly amongst heterodox economic schools of thought and in ideological opposition to those supporting the existing institutional structures perpetuating a false reality of the world's social, environmental and economic systems and their operation.

Officially, economists follow a rigorous and scientific epistemological approach which has been connected to logical empiricism. From this epistemological basis a methodology of deduction in economics has developed. This sets a procedure for gaining knowledge on the basis of theory development leading to hypotheses which are meant to be tested by observation resulting in confirmation or falsification. A summary of the key failures in mainstream economics which have been outlined is that (i) economists do not actually follow their supposed epistemology, (ii) their approach lacks an explicit ontology, (iii) the philosophy of science from which this approach is derived has been caricatured in a single form when it was a diverse and contested body of work. The continued support for mathematical formalism and quantification as providing the sole means to scientific rigour and validity is damaging to an alternative vision for ecological economics. The main reason Norgaard made his, somewhat flawed, case for pluralism appears to have been his concern that ecological economics in its infancy should avoid domination by a prescriptive epistemology, and so lose the opportunity to develop and experiment with other approaches. After over two decades the time for a more progressive stance on the philosophy of science appropriate for ecological economics is overdue. Ecological economics has an empirical aspect and some possible intellectual roots amongst members of the left Vienna Circle. That mainstream economics is not following logical empiricism seems more of a problem than the claim that it is following some form of highly restrictive positivism. Ecological economics is, and should be in part, an empirically based subject, but the form of that empiricism needs development and should not be restricted to a narrow, dogmatic, anti-pluralist, prescriptive caricature, nor based upon appeals to the most popular methodology. There seems no hope for progress if all that is done is to follow a rejected methodology on the grounds that it is believed to be dominant amongst those whom one opposes. This paper is a first tentative step in a project aiming at some coherence as we move from ontology to method. Pursuit of that project should aid the avoidance of holding totally contradictory positions simultaneously. The argument put forward denies the claim that everything can be included and that failing to include all other disciplines and their tools in an indiscriminate manner is paramount to an ‘intellectual turf war’. Ecological economics is not free from ontological or epistemological positions which have methodological implications. The aim here has been to explore these issues and their relevance and to show we can start to formulate a substantively different vision from that of orthodox economics as a school of thought. In criticising unstructured and uncritical pluralism (with respect to methodology) my aim has been to point out that knowledge creation requires refining and rejecting information and approaches. This does not mean that all pluralism is to be thrown out. Rather, grounds for making pluralism meaningful are required and that implies finding common ground for interaction and communication using common concepts. I have argued that those commonalities lie between ecological economics and heterodox economic schools of thought. Neoclassical approaches are in fact then detrimental to developing an alternative economic vision and conflict with epistemological progress. If people wish to undertake such approaches they should do so elsewhere, and so free ecological economics from having to pretend to agree with a series of orthodox fallacies, including: the pretence that there is no biophysical reality imposing limits and economics can be value free. Ecological economics can either develop a more rigorous approach and establish a theoretical structure or become increasingly eclectic, unfocussed and irrelevant. Ecological economics as a conservative movement is an unnecessary waste of time, merely shadowing environmental and resource economics. Ecological economics as a radical movement is required today, more than ever, in order to criticise and change the social organisations and institutions that spread false beliefs about economic, social and environmental reality.