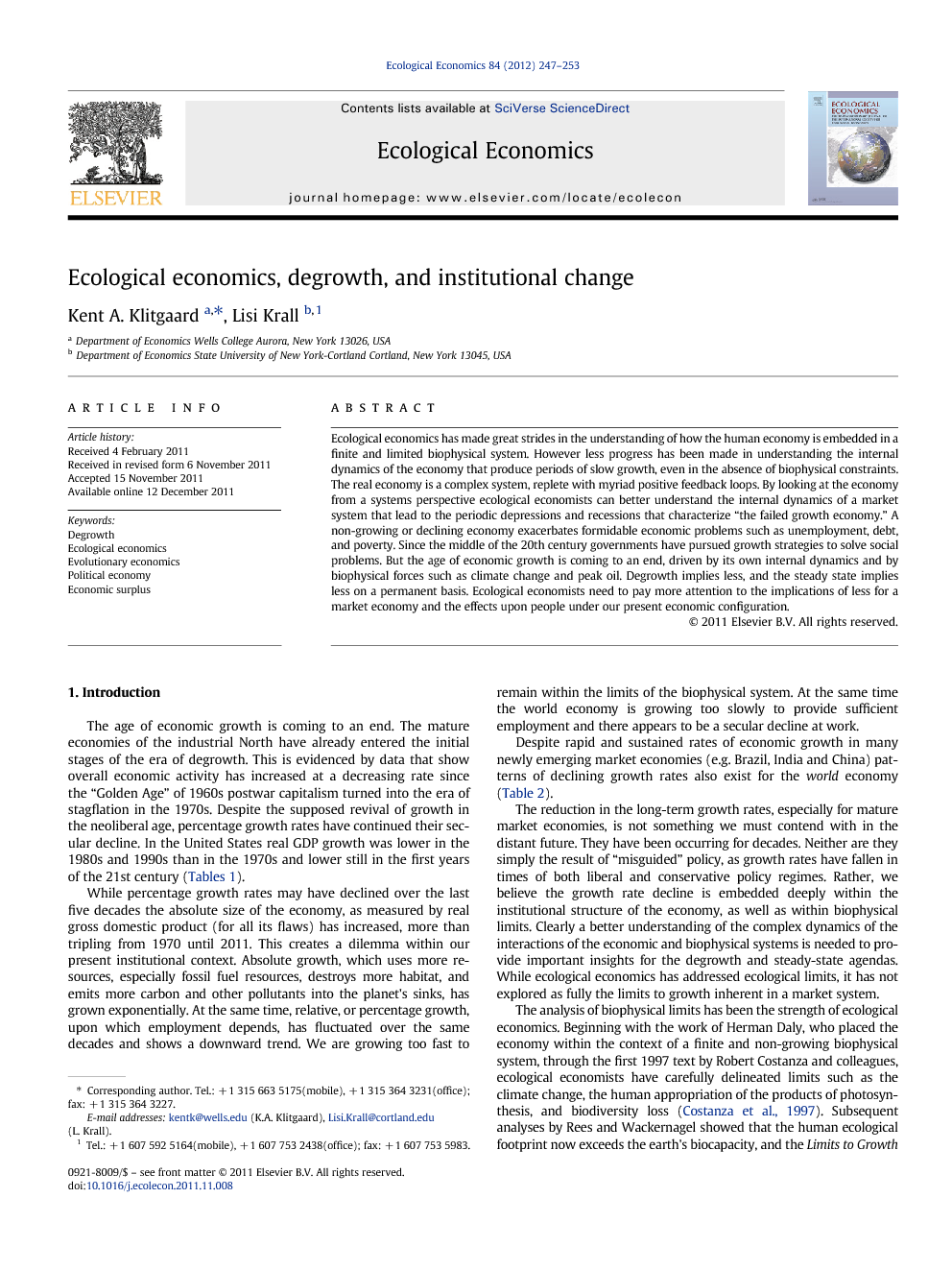 Ecological economics has made great strides in the understanding of how the human economy is embedded in a finite and limited biophysical system. However less progress has been made in understanding the internal dynamics of the economy that produce periods of slow growth, even in the absence of biophysical constraints. The real economy is a complex system, replete with myriad positive feedback loops. By looking at the economy from a systems perspective ecological economists can better understand the internal dynamics of a market system that lead to the periodic depressions and recessions that characterize “the failed growth economy.” A non-growing or declining economy exacerbates formidable economic problems such as unemployment, debt, and poverty. Since the middle of the 20th century governments have pursued growth strategies to solve social problems. But the age of economic growth is coming to an end, driven by its own internal dynamics and by biophysical forces such as climate change and peak oil. Degrowth implies less, and the steady state implies less on a permanent basis. Ecological economists need to pay more attention to the implications of less for a market economy and the effects upon people under our present economic configuration.

The age of economic growth is coming to an end. The mature economies of the industrial North have already entered the initial stages of the era of degrowth. This is evidenced by data that show overall economic activity has increased at a decreasing rate since the “Golden Age” of 1960s postwar capitalism turned into the era of stagflation in the 1970s. Despite the supposed revival of growth in the neoliberal age, percentage growth rates have continued their secular decline. In the United States real GDP growth was lower in the 1980s and 1990s than in the 1970s and lower still in the first years of the 21st century (Tables 1). While percentage growth rates may have declined over the last five decades the absolute size of the economy, as measured by real gross domestic product (for all its flaws) has increased, more than tripling from 1970 until 2011. This creates a dilemma within our present institutional context. Absolute growth, which uses more resources, especially fossil fuel resources, destroys more habitat, and emits more carbon and other pollutants into the planet's sinks, has grown exponentially. At the same time, relative, or percentage growth, upon which employment depends, has fluctuated over the same decades and shows a downward trend. We are growing too fast to remain within the limits of the biophysical system. At the same time the world economy is growing too slowly to provide sufficient employment and there appears to be a secular decline at work. Despite rapid and sustained rates of economic growth in many newly emerging market economies (e.g. Brazil, India and China) patterns of declining growth rates also exist for the world economy (Table 2). The reduction in the long-term growth rates, especially for mature market economies, is not something we must contend with in the distant future. They have been occurring for decades. Neither are they simply the result of “misguided” policy, as growth rates have fallen in times of both liberal and conservative policy regimes. Rather, we believe the growth rate decline is embedded deeply within the institutional structure of the economy, as well as within biophysical limits. Clearly a better understanding of the complex dynamics of the interactions of the economic and biophysical systems is needed to provide important insights for the degrowth and steady-state agendas. While ecological economics has addressed ecological limits, it has not explored as fully the limits to growth inherent in a market system. The analysis of biophysical limits has been the strength of ecological economics. Beginning with the work of Herman Daly, who placed the economy within the context of a finite and non-growing biophysical system, through the first 1997 text by Robert Costanza and colleagues, ecological economists have carefully delineated limits such as the climate change, the human appropriation of the products of photosynthesis, and biodiversity loss (Costanza et al., 1997). Subsequent analyses by Rees and Wackernagel showed that the human ecological footprint now exceeds the earth's biocapacity, and the Limits to Growth studies by Meadows et al. concluded that human activity has overshot the carrying capacity and the scale of human activity is unlikely to be maintained into the next century. The work of many energy analysts ( Campbell, 2005, Campbell et al., 1998, Deffeyes, 2001, Hall and Klitgaard, 2011 and Hallock et al., 2004; Heinberg, 2005 and Simmons, 2006) concludes that we are at or near the global peak of fossil hydrocarbons and future economic activity will be impacted strongly by more expensive and less available petroleum. The second set of limits is internal and is to be found in the dynamics of the accumulation process, involving the complex structural interaction of production, consumption, and distribution. The internal limits that gear the economy toward both cyclical variation and secular stagnation have not been considered systematically by ecological economists. When the economy reached these limits historically the result has been a series of periodic recessions and depressions. Renewed growth has been the answer, just as it is now. If the system reaches its own internal limits at the same time the world reaches its external biophysical limits we will have a profound challenge because we need a way to facilitate decent standards of living when economic growth can no longer be the vehicle to maintain incomes and assure social stability. In the last instance, a system in overshoot can neither grow its way out of its inherent tendency toward stagnation, nor can it grow its way into sustainability. We believe it is unlikely that the present system of capitalism, dominated by multinational corporations, globalization, speculative finance, and dependence upon fossil fuels, can adjust to the era of degrowth and remain intact as is. In order to devise an economy that meets human needs as it approaches both sets of limits, ecological economics needs to understand more fully the structural and institutional dimensions of the internal and external limits, as well as the interaction between the two. This is our challenge, and it is a difficult one. Ecological economics can better understand the necessary institutional configuration of the non-growing economy only by an improved understanding of the dynamics of growth and capital accumulation, because it is here that the inherent tendencies to stagnate and the resolution to stagnation are found.