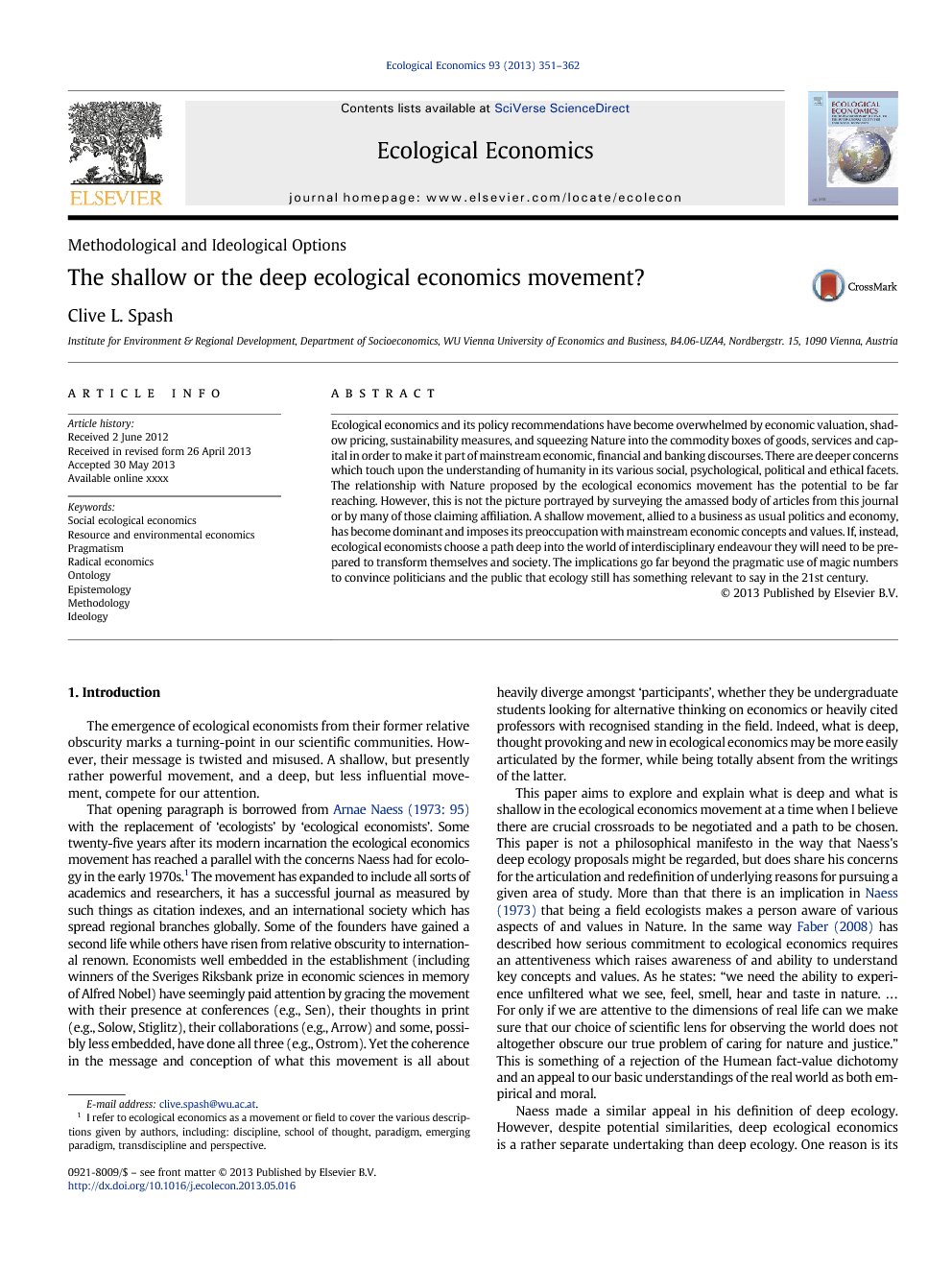 Ecological economics and its policy recommendations have become overwhelmed by economic valuation, shadow pricing, sustainability measures, and squeezing Nature into the commodity boxes of goods, services and capital in order to make it part of mainstream economic, financial and banking discourses. There are deeper concerns which touch upon the understanding of humanity in its various social, psychological, political and ethical facets. The relationship with Nature proposed by the ecological economics movement has the potential to be far reaching. However, this is not the picture portrayed by surveying the amassed body of articles from this journal or by many of those claiming affiliation. A shallow movement, allied to a business as usual politics and economy, has become dominant and imposes its preoccupation with mainstream economic concepts and values. If, instead, ecological economists choose a path deep into the world of interdisciplinary endeavour they will need to be prepared to transform themselves and society. The implications go far beyond the pragmatic use of magic numbers to convince politicians and the public that ecology still has something relevant to say in the 21st century.

The emergence of ecological economists from their former relative obscurity marks a turning-point in our scientific communities. However, their message is twisted and misused. A shallow, but presently rather powerful movement, and a deep, but less influential movement, compete for our attention. That opening paragraph is borrowed from Arnae Naess (1973: 95) with the replacement of ‘ecologists’ by ‘ecological economists’. Some twenty-five years after its modern incarnation the ecological economics movement has reached a parallel with the concerns Naess had for ecology in the early 1970s.1 The movement has expanded to include all sorts of academics and researchers, it has a successful journal as measured by such things as citation indexes, and an international society which has spread regional branches globally. Some of the founders have gained a second life while others have risen from relative obscurity to international renown. Economists well embedded in the establishment (including winners of the Sveriges Riksbank prize in economic sciences in memory of Alfred Nobel) have seemingly paid attention by gracing the movement with their presence at conferences (e.g., Sen), their thoughts in print (e.g., Solow, Stiglitz), their collaborations (e.g., Arrow) and some, possibly less embedded, have done all three (e.g., Ostrom). Yet the coherence in the message and conception of what this movement is all about heavily diverge amongst ‘participants’, whether they be undergraduate students looking for alternative thinking on economics or heavily cited professors with recognised standing in the field. Indeed, what is deep, thought provoking and new in ecological economics may be more easily articulated by the former, while being totally absent from the writings of the latter. This paper aims to explore and explain what is deep and what is shallow in the ecological economics movement at a time when I believe there are crucial crossroads to be negotiated and a path to be chosen. This paper is not a philosophical manifesto in the way that Naess's deep ecology proposals might be regarded, but does share his concerns for the articulation and redefinition of underlying reasons for pursuing a given area of study. More than that there is an implication in Naess (1973) that being a field ecologists makes a person aware of various aspects of and values in Nature. In the same way Faber (2008) has described how serious commitment to ecological economics requires an attentiveness which raises awareness of and ability to understand key concepts and values. As he states: “we need the ability to experience unfiltered what we see, feel, smell, hear and taste in nature. … For only if we are attentive to the dimensions of real life can we make sure that our choice of scientific lens for observing the world does not altogether obscure our true problem of caring for nature and justice.” This is something of a rejection of the Humean fact-value dichotomy and an appeal to our basic understandings of the real world as both empirical and moral. Naess made a similar appeal in his definition of deep ecology. However, despite potential similarities, deep ecological economics is a rather separate undertaking than deep ecology. One reason is its independence from mystical and spiritual overtones.2 Instead an emphasis should be placed on addressing concerns about environmental values and human relationships with Nature through a theory of ethical conduct, where an explicit account is given of the political and economic implications.3 In order to be successful, such a frame must certainly be able to take seriously, and address, the deep philosophical concerns raised by Naess and others (e.g., eco-feminists) about human alienation from and domination over Nature, as built into modern patriarchal society. What I will explore here is how this should lead ecological economists to a radically different approach from mainstream economists for addressing a range of both theoretical and practical concerns relating to the social, ecological and economic reality in which we now live. Actually, in exploring these issues I wish to largely avoid a simple dichotomy with deep on one side and shallow on the other, although this serves as a useful shorthand for the general issues raised. As Nelson (2009) has argued, such black and white divisions can prove unnecessarily antagonistic. The world is rarely so simple as dichotomous categories claim and human affairs least of all. Indeed, what I will show is that the ecological economics movement is populated by a variety of contributors and affiliates who can be separated by their theoretical and ideological positions into three main camps. Even this proves inadequate for capturing the full picture of argumentation in the field about direction and meaning. Thus, the three camps are supplemented by the philosophy of one ‘big tent’ and three other conjunctions of the main positions. The extent to which these seven positions are populated by a substantive number of researchers, or representative in any way, is an empirical question that this paper does not venture to address, but investigation of which is ongoing and pursued elsewhere (see Spash and Ryan, 2012). The aim here is to set out the theoretical and ideological landscape of ecological economics in order to identify where people are located. This requires not being afraid of pointing out where substantive divisions, and inconsistencies, lie. The paper classifies thought within ecological economics as broadly constituted. In the next section I briefly outline the history of the movement and how this created the background for the development of different camps and advocacy of incompatible epistemologies. I then, in Section 3, propose a set of categories to explain how ecological economics has developed and where it now stands as a conflicted and divided field of research. The three main camps are described as new environmental pragmatism, new resource economics and social ecological economics. In Section 4, I consider the implications of these categories for unity and division within ecological economics. In the conclusions, Section 5, I return to the question of what is deep and what is shallow in the ecological economics movement.

I have put forward the characterisation of three main alternative camps and outlined their positions. This has been used to illustrate the on-going struggle within ecological economics, and more generally society, over the best way to address the complex of social and environmental problems in the world. I have suggested how these positions might be combined producing further possible groupings, although I also note the possible contradictions and conflicts inevitable in holding some such combinations. At the same time, a simple, if crude, contrast between shallow and deep positions can be useful for indicating what is wrong with ecological economics. For Arnae Naess (1973) shallow ecology could be summarised as a fight against pollution and resource depletion which had a central objective of health and affluence for the ‘developed countries’. It was preoccupied with instrumentality and the reduction of everything to material and energy flow accounting and functional usefulness for human ends. The shallow ecological economics movement shares something of this perspective but combines it with a sophisticated rhetoric of concern for ‘other things’. The many other things might include social justice, poverty, treatment of non-humans, democratic process and so on, but such things are either the subject matter for someone else or things to be dealt with later by ‘further research’. The aim of a deep social ecological economics position is to make ethical conduct central and to place the social, ecological and economic discourses on an equal footing. The unquestioning use of monetary values and adjusted national income numbers have formed the flagship of the shallow ecological economics movement and made it some powerful allies. Power for ‘the message’ was what ecologist sought and having found a means to get attention why give up now? Unfortunately, like the hapless characters in Douglas Adams' novel “Hitchhikers' Guide to the Galaxy”, having found the answer to ‘life the universe and everything’ encapsulated in a single number the realisation is dawning that this lacks any meaning. Still more like those characters, the number crunchers have created a whole industry in speculating as to how ‘the number’ might be interpreted, and how different means of calculation could produce an even better ‘ultimate answer’. Ecologist then have employed cost–benefit tools in ways practicing environmental economist would never have dared to do. Valuing ecosystems at highly aggregated levels, transferring whatever numbers come to hand across time and space, and implicitly advocating the spread of pricing and markets to all aspects of environmental management. This has in turn emboldened and reinvigorated resource and environmental economists, who may basically follow the same approach while sniping at the poor conduct of the ecologists and others. Calling on theory, they can recommend how these things should be done properly by serious scientific economists, not campaigning environmental pragmatists. At the same time they have not been averse to publishing their own lesser and/or theoretically ungrounded works in Ecological Economics, which has a higher impact factor than most economics journals. This is why, for social ecological economists, the journal has for sometime had the appearance of being a dumping ground for second rate and duplicated papers from agricultural, energy, resource and environmental economics. Unfortunately, all the approaches and factors currently making ecological economics a shallow movement have also led to a muddying of the waters and loss of sight of the original objectives. Shallow ecological economics as pushed by new resource economists offers little which has not been on the agenda of resource and environmental economists working within the current economic orthodoxy. It does not provide a useful tension between alternative viewpoints which is stimulating discussion and leading to progress, a new synthesis or a transformation in thought. Instead it provides a powerful dominating force which leads to control, marginalisation and suppression of more radical and alternative ideas. Moving away from the orthodoxy is necessary to nurture the social ecological economics agenda. Deep ecological economics requires challenging both personal and social pre-conceptions, while taking a campaigning sprit to change public policy and the institutions blocking the necessary transition to an alternative political economy. Shallow waters, close to shore, appear to offer relative safety and security. You can quickly escape to dry land, and you can chose to be where there are plenty of others around, in case you get into trouble. Yet, the shallows are where you run aground and get shipwrecked. Once you learn to sail, shallow waters soon appear more dangerous than the depths of the open sea. Deep waters are also much to be preferred when riding-out a storm.