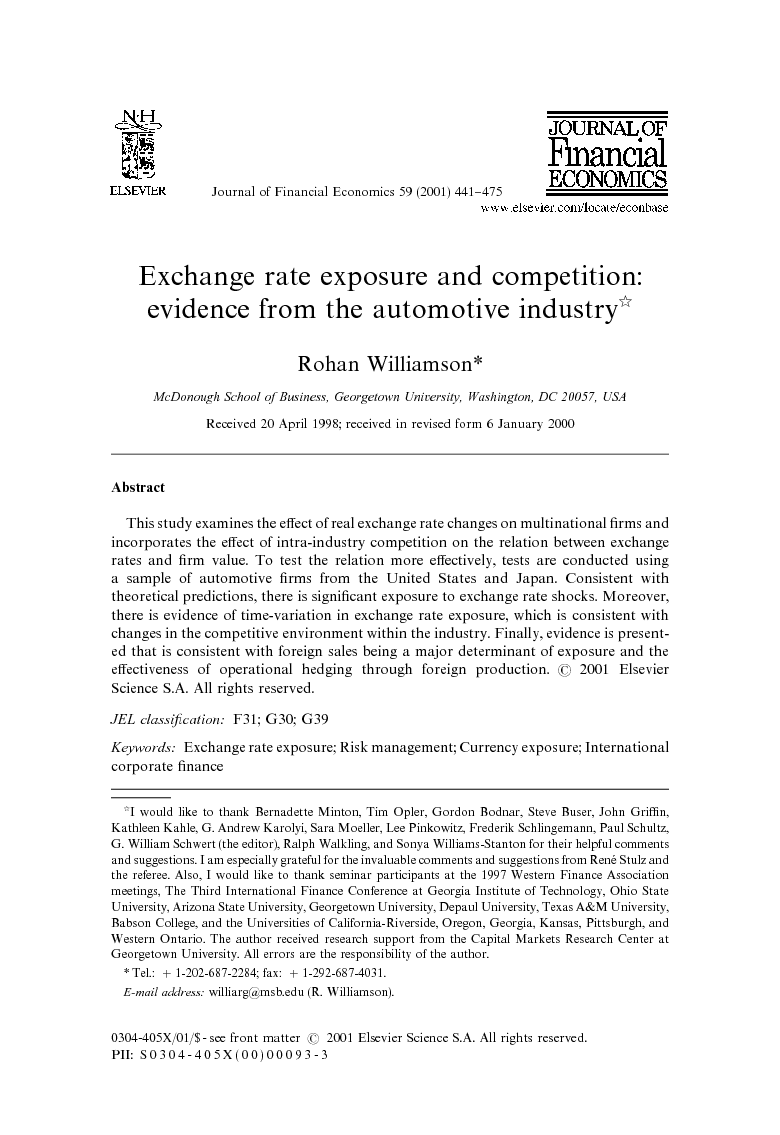 This study examines the effect of real exchange rate changes on multinational firms and incorporates the effect of intra-industry competition on the relation between exchange rates and firm value. To test the relation more effectively, tests are conducted using a sample of automotive firms from the United States and Japan. Consistent with theoretical predictions, there is significant exposure to exchange rate shocks. Moreover, there is evidence of time-variation in exchange rate exposure, which is consistent with changes in the competitive environment within the industry. Finally, evidence is presented that is consistent with foreign sales being a major determinant of exposure and the effectiveness of operational hedging through foreign production.

Since the breakdown of the fixed exchange rate regime, the international economic environment has been characterized by substantial exchange rate volatility. This volatility occurs for both nominal and real exchange rates. Real exchange rate changes translate into deviations from purchasing power parity (PPP), which, for a multinational firm or global competitor, should have a direct effect on firm value.1 A global competitor is a firm that faces substantial foreign competition. Empirical results of the effect of exchange rates on firm value and its implications have not been as strong or as consistent as expected based on theoretical predictions. These results raise questions regarding whether deviations from PPP are unimportant for global competitors or whether the existing tests fail to capture the effects these deviations have on firm value. It may be possible to improve on existing results by conducting tests for these effects on specific industries and exchange rates. Tests of a specific industry should allow for clearer analyses of the role of exchange rates on the value of the multinational firm or global competitor and the impact of industry structure on exchange rate exposure. This study investigates the effect of real exchange rate changes on the value of firms in the automotive industry, taking into account the effect of industry structure and competition on the relation between exchange rates and firm value. Consistent with Marston (1996), this paper argues that the exchange rate exposure of a firm is a function of its net foreign revenues, the elasticity of demand of the products made by the firm and its competitors in foreign and domestic markets, and the location of its production. The assumption is that a firm facing high levels of foreign competition will also face high demand elasticity. Therefore, a useful test for the existence of exchange rate exposure would employ a sample of firms that both have high levels of foreign sales and face foreign competition. This sample should also provide for direct comparisons between firms. The study documents significant exchange rate exposure for automotive firms from the United States and Japan from 1973 to 1995. An analysis of the determinants of a firm's exchange rate exposure is done by examining the market share of the firms in the U.S., Japan, and Germany to analyze the impact of foreign sales on exposure. This exercise is consistent with the idea that the currency exposure of a firm is a function of the export sales achieved and the competition encountered in a particular market. The results show that the exposure of U.S. firms to the yen and Japanese firms to the dollar are due to the Japanese sales in the U.S. market. Exchange rate exposure in the automotive industry changes through time, mostly because of the changing structure of the industry over the sample period. The changes in dollar-to-yen exposures are strong for both U.S. and Japanese firms. The findings for the Japanese firms are consistent with the findings of He and Ng (1998) for Japanese firms in the transport sector. Perhaps surprisingly, we also find that U.S. firms benefit from a depreciation of the Deutschmark relative to the dollar. This result is consistent with U.S. firms gaining due to income from their European operations, at the expense of their non-German competitors when the Deutschmark depreciates. For all firms, the estimated exposure is stronger during periods of large and extended movements in real currency values of the countries tested, as well as, during periods of relatively high foreign competition. A prediction of the theory is that a firm's exchange rate exposure depends on its foreign as well as its domestic demand elasticities. Therefore, because of the different characteristics of the firms in the world automotive industry, the components of this exposure should vary across markets. Consistent with this prediction, the findings show that exposure varies across firms from different countries. In evaluating the exchange rate exposure of international firms, it is important to note that what is really being measured is the net exposure to exchange rates, or the exposure that remains after the firm has engaged in some hedging activity, whether through the use of derivatives or through its operations. The hedging effect must also be considered in the context of the level of a firm's foreign sales relative to its total sales which, according to previous studies, is the main determinant of exchange rate exposure.2 To evaluate the importance of foreign sales on foreign exchange exposures along with the effects of foreign production on mitigating exposures, the impact of foreign sales and operations on the exposure of Japanese automotive firms is analyzed. The results are consistent with foreign sales increasing exposure and foreign operations reducing exposure. This paper is organized as follows. Section 2 reviews previous literature and the motivation for this study. In Section 3, the main body of the work is discussed. Section 3 also includes a general theory of the exchange rate exposure of multinational firms and global competitors, and a discussion of the determinants of this exposure. In Section 4, the data selection method is reviewed, and predictions of the analysis are presented. In Section 5, the results of the exposure tests at the country level and firm-specific level are discussed. Section 6 evaluates the industry evolution and its impact on exchange rate exposures, while Section 7 examines the effect of the ratio of foreign sales to total sales and foreign production on exposures. Section 8 provides the conclusion.