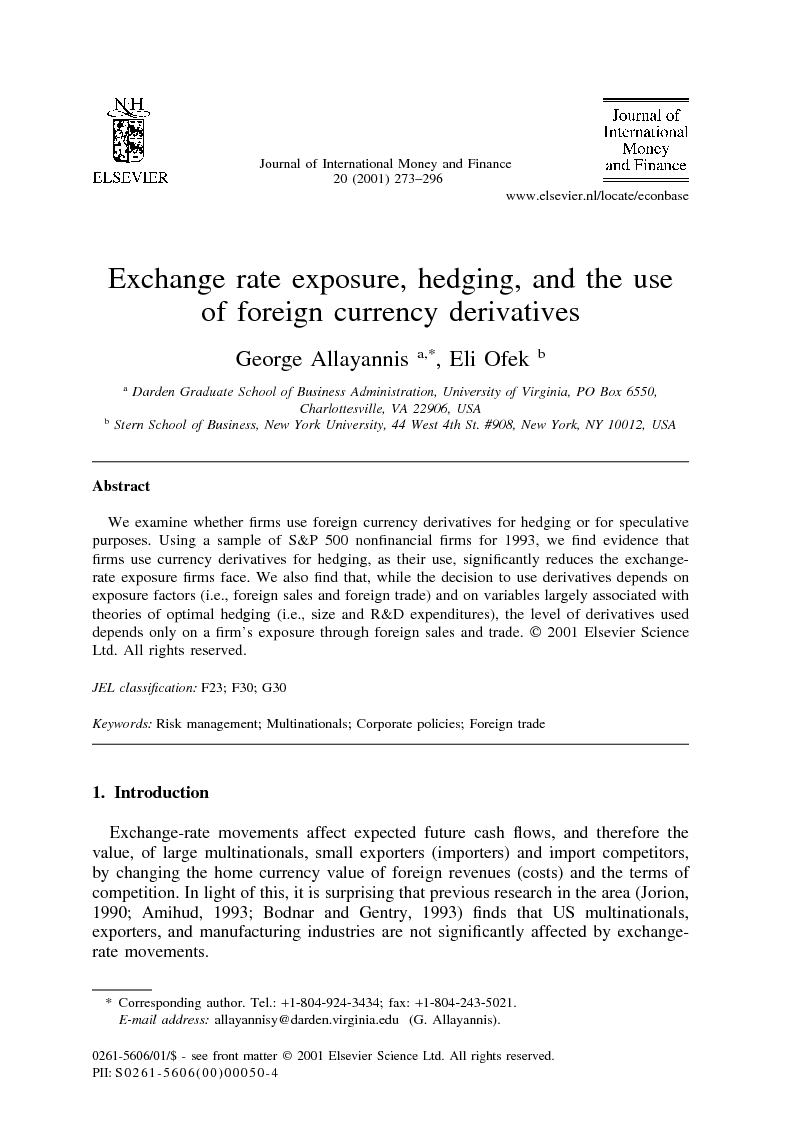 We examine whether firms use foreign currency derivatives for hedging or for speculative purposes. Using a sample of S&P 500 nonfinancial firms for 1993, we find evidence that firms use currency derivatives for hedging, as their use, significantly reduces the exchange-rate exposure firms face. We also find that, while the decision to use derivatives depends on exposure factors (i.e., foreign sales and foreign trade) and on variables largely associated with theories of optimal hedging (i.e., size and R&D expenditures), the level of derivatives used depends only on a firm's exposure through foreign sales and trade.

This paper examines whether firms use currency derivatives for hedging or for speculative purposes. Using a sample of S&P 500 nonfinancial firms for 1993, we examine the impact of currency derivatives on firm exchange-rate exposure, the factors that prompt corporations to hedge, and the factors that affect their decision on how much to hedge. We find a strong negative association between foreign currency derivative use and firm exchange-rate exposure, suggesting that firms use derivatives as a hedge rather than to speculate in the foreign exchange markets. This relation is robust to alternative time intervals and exchange-rate indices to estimate exposure and estimation methods (e.g., weighted least squares and probit) that we use to examine the relation between exchange rate exposure and currency derivative use. It is also robust to the use of a larger, alternative sample that includes all US manufacturing firms that have total assets above 100 million during 1994 and 1995 and to the use of individual exchange rates instead of trade-weighted exchange-rate indices. We find additional supportive evidence on the firm's hedging behavior, when we examine separately, using a two-stage framework, the factors that are associated with a firm's decision to hedge and its decision on the level of hedging. We find evidence that a firm's exposure through foreign sales and foreign trade is a very important factor that both prompts corporations to hedge and guides their decision on how much to hedge. Firms can also use foreign debt to protect themselves from exchange-rate movements. Similarly, we find that a firm's exposure through foreign sales is an important determinant of its decision to use foreign debt and on its decision on the level of foreign debt. Collectively, our results suggest that firms use currency derivatives and foreign debt as a hedge. Our paper has important implications for managers and financial regulators. A firm's exposure to exchange-rate movements is mitigated through the use of foreign currency derivatives. This finding suggests that an intervention in the derivatives markets may not be warranted, and provides an explanation for the lack of significant exposure documented in past studies.