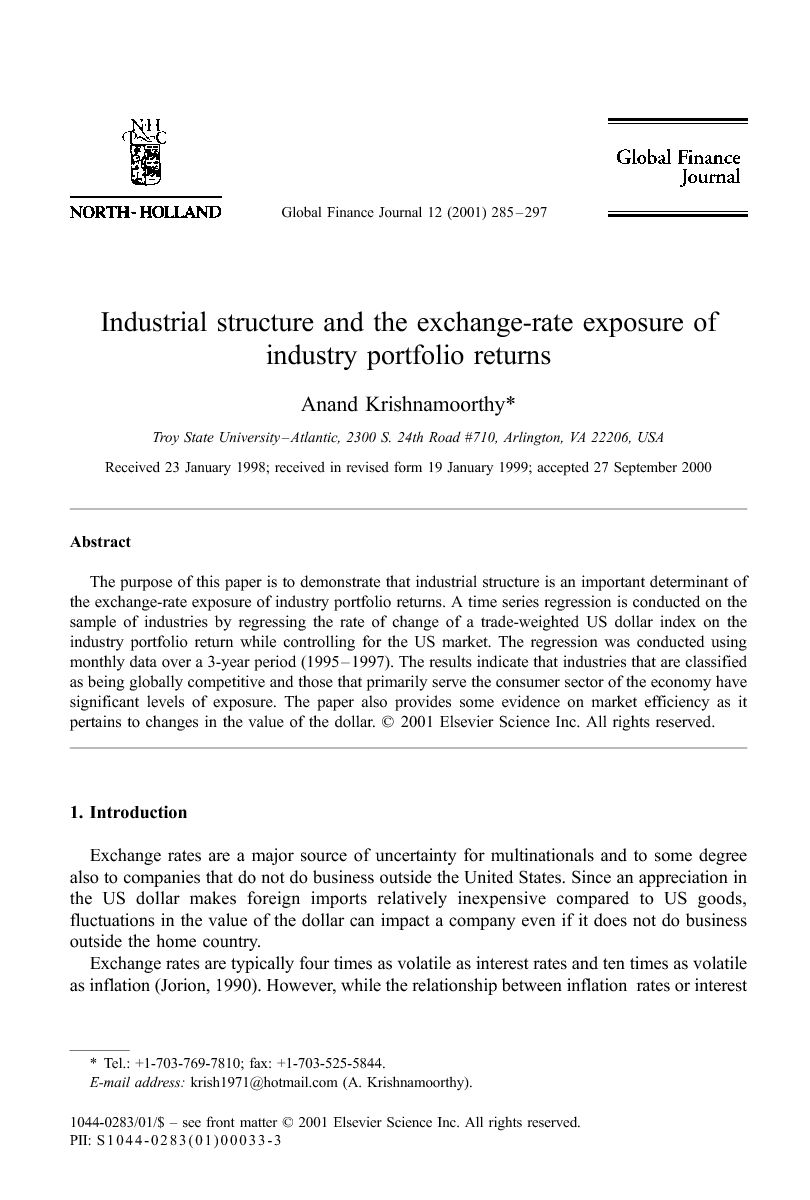 The purpose of this paper is to demonstrate that industrial structure is an important determinant of the exchange-rate exposure of industry portfolio returns. A time series regression is conducted on the sample of industries by regressing the rate of change of a trade-weighted US dollar index on the industry portfolio return while controlling for the US market. The regression was conducted using monthly data over a 3-year period (1995–1997). The results indicate that industries that are classified as being globally competitive and those that primarily serve the consumer sector of the economy have significant levels of exposure. The paper also provides some evidence on market efficiency as it pertains to changes in the value of the dollar.

Exchange rates are a major source of uncertainty for multinationals and to some degree also to companies that do not do business outside the United States. Since an appreciation in the US dollar makes foreign imports relatively inexpensive compared to US goods, fluctuations in the value of the dollar can impact a company even if it does not do business outside the home country. Exchange rates are typically four times as volatile as interest rates and ten times as volatile as inflation (Jorion, 1990). However, while the relationship between inflation rates or interest rates and the value of the firm has been extensively analyzed, the relationship between exchange rates and the value of the firm has not been subject to much empirical research. This is one of the first studies to consider exchange rate exposure at the industry level. This study considers the fact that different industries may be differently exposed to exchange rate fluctuations. As a result, when a researcher attempts to measure exchange rate exposure for a broad cross-section of firms from various industries, canceling effects may obscure a significant relationship. This could be a potential explanation for the limited success of prior studies in documenting a causal link between stock returns and changes in the value of the dollar. This paper extends previous research on exchange rate exposure at the industry level by segregating a sample of industries based on industrial structure. Specifically, this paper will be looking at two forms of industrial structure: competitive vs. oligopolistic industries and consumer-oriented vs. institutionally oriented industries. One of the goals of this paper is to ascertain whether competitive and oligopolistic firms are affected in the same way by exposure to exchange rate fluctuations. The second goal is to ascertain whether firms whose customers are primarily individual consumers are affected in the same way by exposure to exchange rate fluctuations as firms whose customers are primarily institutional buyers. These goals will be achieved by forming industry portfolios based on these two classifications. Without presuming any causal link, exchange rate exposure represents the sensitivity of the value of the firm to exchange rate randomness and can be measured by the regression coefficient of the change in the value of the firm on the change in the exchange rate (Jorion, 1990). In industries that are highly competitive, changes in the value of the dollar can affect firms within the industry differently based on location of operations, operating structure (such as currency imbalances), hedging practices, etc. Therefore, fluctuations in the value of the dollar can affect firms differently or to different degrees. Furthermore, the change in the exchange rate will not affect US firms and foreign firms within that industry in the same manner. These differences may be reflected in the prices consumers pay for the company's products. Therefore, changes in the value of the dollar may cause shifts in the market share among firms in that industry thereby making them more sensitive to exchange rate exposure. In oligopolistic industries, there is less competition and often times there is more cooperation among the firms in the industry. There could even be price adjustments by the firms to reflect changes in exchange rates. Consequently, from the consumer's point of view, there may not be any benefits in changing from one company to another even if the companies themselves are differently exposed. Therefore, firms that operate in a oligopolistic environment should be less sensitive to exchange rate exposure. Individual consumers tend to price products more frequently than institutional buyers. Institutional consumers often times have long-term contracts to buy from certain suppliers. Furthermore, institutional consumers may not have the luxury of not buying a certain product if they wish to continue operations. Individual consumers, on the other hand, are not bound to consume a product unless it is an “absolute necessity.” If there are significant changes in prices due to exchange-rate changes, firms who rely more heavily on consumers for their revenues are more likely to be affected by such changes. Therefore, firms that are more oriented towards individual consumers should be more sensitive to exchange rate exposure than firms that are more oriented towards institutional consumers. The results of the study are consistent with the above predictions. They indicate that industries that are classified as being globally competitive are indeed more sensitive to exchange rate exposure than their oligopolistic counterparts. Likewise, industries that are more dependent on individual consumers for their revenues had significant exposure coefficients while those that rely more heavily on institutional consumers did not. These results have implications for financial managers of major US firms. Whether or not to hedge exchange rate risk is an ongoing debate in the business world. If certain firms are more exposed than others, the hedging decision for those firms is more critical. In addition to providing evidence on the impact of industrial structure on exchange rate exposure, a retest of the mispricing hypothesis was conducted by including a lagged dollar term in all regressions. The results of this paper indicate that prior dollar changes do not significantly explain stocks returns at the industry level. This study indicates that all the implications of foreign currency movements are impounded into the contemporaneous stock price. The remainder of this paper is organized as follows: Section 2 will provide a brief overview of the existing literature in the field. This section will also explain how this paper fills a gap in the existing knowledge. Section 3 will discuss the key hypotheses. This will be followed by a description of the sample selection process. Section 5 describes the methodology that is employed in the study. Section 6 presents the empirical results and Section 7 concludes.

This paper has demonstrated that industrial structure is an important determinant of exchange-rate exposure. Firms that operate in a more competitive environment are more sensitive to exchange-rate exposure than those that operate in a more oligopolistic environment. Likewise, firms that primarily serve the consumer sector of the economy are more sensitive to exchange-rate exposure than those that serve the institutional sector. These findings have implications for the hedging decision by financial managers at multinational firms. The decision of whether or not to hedge exchange-rate risk for firms that operate in a more competitive environment or those that primarily serve individual consumers is more critical than that of firms that operate in a more oligopolistic environment or those that primarily serve institutional customers. This paper has also provided some evidence on market efficiency as it pertains to changes in the value of the dollar. Contrary to the results of prior studies, this paper has demonstrated that past dollar movements do not contain useful information for predicting industry portfolio returns. All the implications of foreign currency movements are impounded in the contemporaneous stock price. Most of the studies in this area have been at the firm level. This study is one of the few that has been conducted at the industry level. Furthermore, this study is the first one to investigate whether or not industrial structure can explain the differential exchange-rate exposure across industry groups. Consequently, there are several avenues for future research. Perhaps segregating the competitive vs. oligopolistic classification into four categories (monopoly, oligopoly, monopolistic competition, and perfect competition) would provide additional insights into the effects of exchange rate variability on industry returns. One problem of trying to narrow the classification scheme is that it makes the analysis vulnerable to misclassification errors. However, if there was a way to circumvent this problem it would be interesting to see whether the theory developed in this paper still holds. One limitation of the second classification scheme, consumer vs. institutionally oriented firms, is that there is some overlap between the two categories. In other words, a particular firm's products may have a high demand in the individual as well as the institutional sector of the economy. If there was a formal way to quantify and explicitly control for the overlap, the results may be different. If they are not then that would provide additional support for the results of this paper.